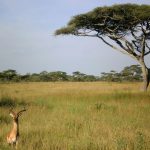 Last week we went on expedition to one of the seven natural wonders of the world – the Serengeti. After an early start from Moyo Hill Camp, we traversed Ngorongoro Conservation Area and had an interesting educational stop over at Olduvai George – one of the cradles of manhood.

Upon commencing to Serengeti, we were amazed by the migration: thousands and thousands of wildebeest, accompanied by countless zebra, Thomson’s and Grant’s gazelle covered the plains to the left and right of our road. Along our route to our campsite, we encountered several lion prides, giraffes, hippos and buffalos. Setting up the camp went smooth and fast, as we were motivated by the upcoming rains.

The nights at camp were chilly and filled with the sounds of hyena whoops, and barking of impala. Even Cape buffalo and a male lion visited our camp in the evenings – the park ranger and Askari Mbura kept us safe in the camp. We started our days early for our wildlife exercises: observing giraffe and elephant, counting birds, and resting during the heat of midday.

Early afternoons were usually filled with interesting guest lectures: we learned about the lion research project and tasks and challenges of the national park management. In late afternoons, we went on game drives, spotted numerous leopards, cheetahs and other amazing wildlife and soaked up the wild and vast nature of the Serengeti plains.