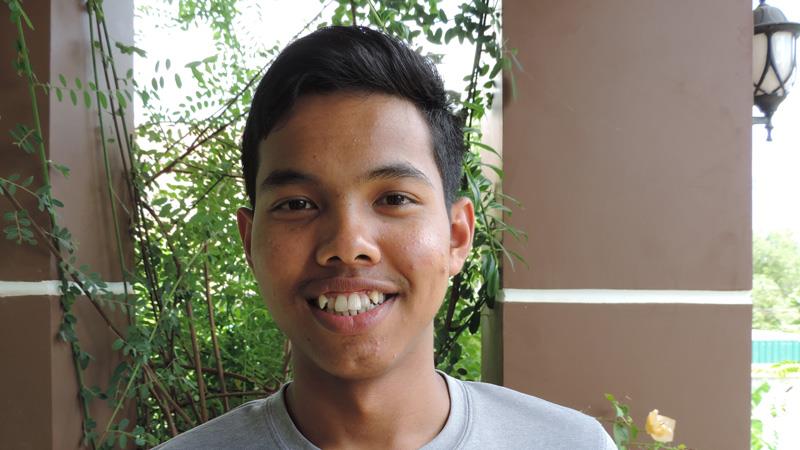 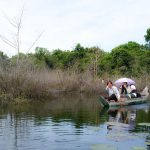 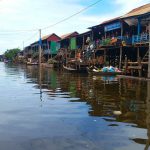 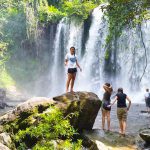 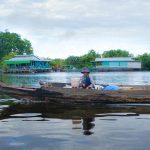 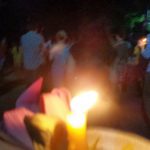 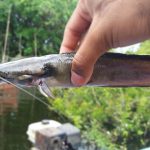 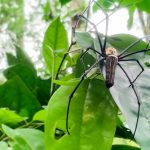 As we progressed into our last week at the field station, before starting our month of travel to different parts of Cambodia and on to Vietnam, my classmates and I have been reflecting on the field trips we went on as preparation for our exams. Almost every field trip had been purely academic. Since Cambodia is a developing country, interviews and discussions are more about the locals’ livelihood and their involvement in conservation rather than solely environmental. Aside from the official academic observations, we still had time to enjoy the beautiful biodiversity people are trying to conserve, the cultural heritage Khmer people have been restoring, and other breathtaking landscapes that the locals’ livelihood depend on. Here are some of the highlights of the trips we went on.

First, let’s bring you to the seasonally flooded village of Kompong Kleang, which in English means: Port of Stocks, stocks of what you all will find out. Just like many villages surrounding the Tonle Sap Lake and other major rivers in Cambodia, Kompong Kleang is a port (Kompong) of aquatic animals, mainly a variety of fish species, locally caught by villagers or by aquaculture. Getting to the floating villages on the Tonle Sap Lake, our group of 15 was on a medium size boat after an hour bus ride from the SFS station. 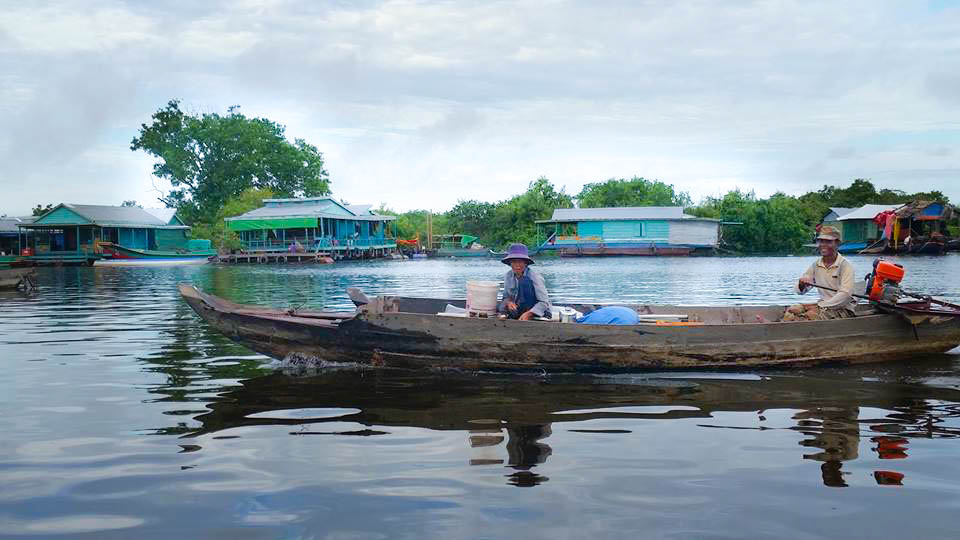 On the boat, we passed from one floating village to another and a few monasteries on top of small hills.  Above is a picture of two villagers practicing their daily livelihood with the region’s most common transportation, small boat. As close as they were to our boat, we were able to see the most welcome grins and laughs on their faces. 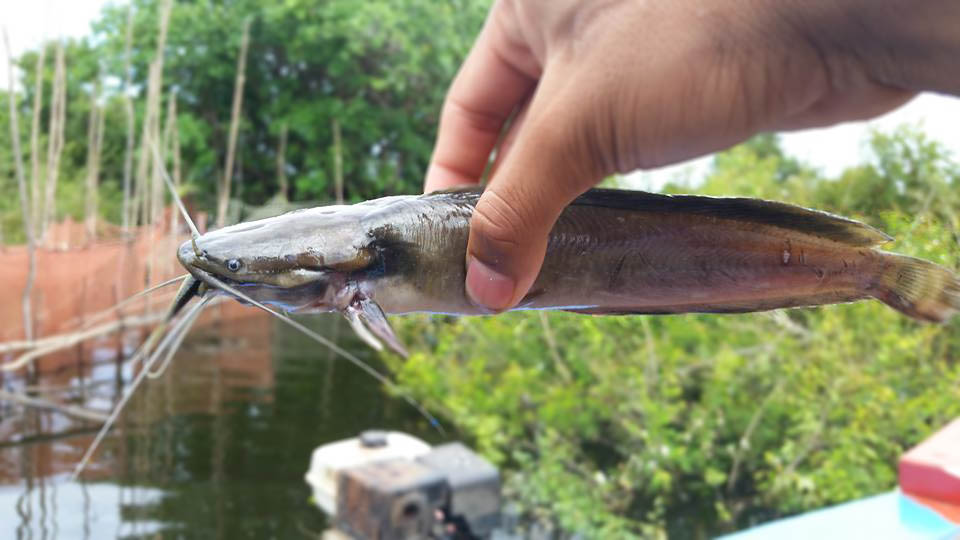 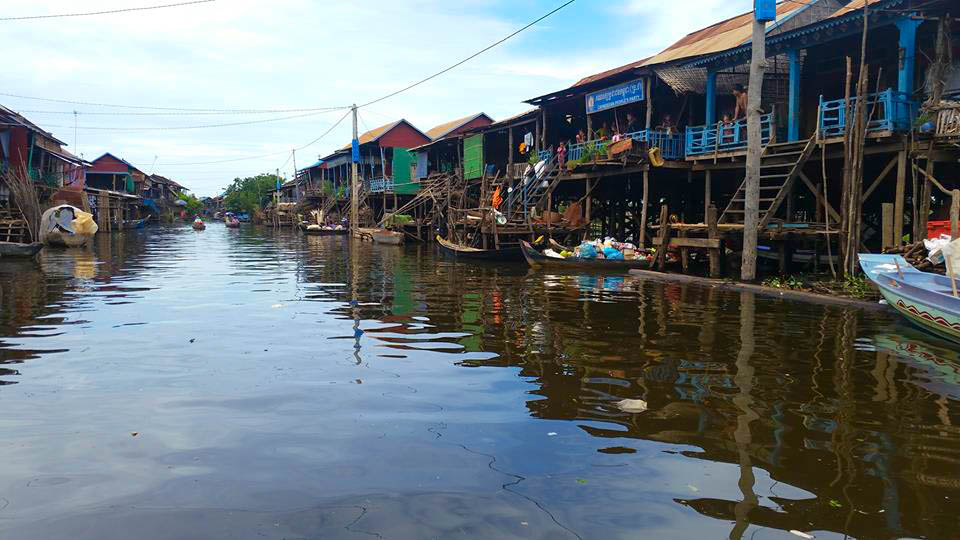 Before stopping for lunch at our host’s house, he took us to where he put his fishing net from the night before. Above is one of the most common fish species found in his net, though what didn’t seem common about this dead catfish was the half-swallowed small fish in its mouth. Our guide told me that the catfish was choked in the process of swallowing its prey. When we went to the village to our host’s house, there were a few hundreds of stilt houses facing an open water way. The space of the water way is supposed to be a dirt road in the dry season. After enjoying one of my favorite Khmer fish dishes, grilled fish with green mango dip sauce, our Environmental Livelihood’s lecturer led an interview with the host families while students took notes. 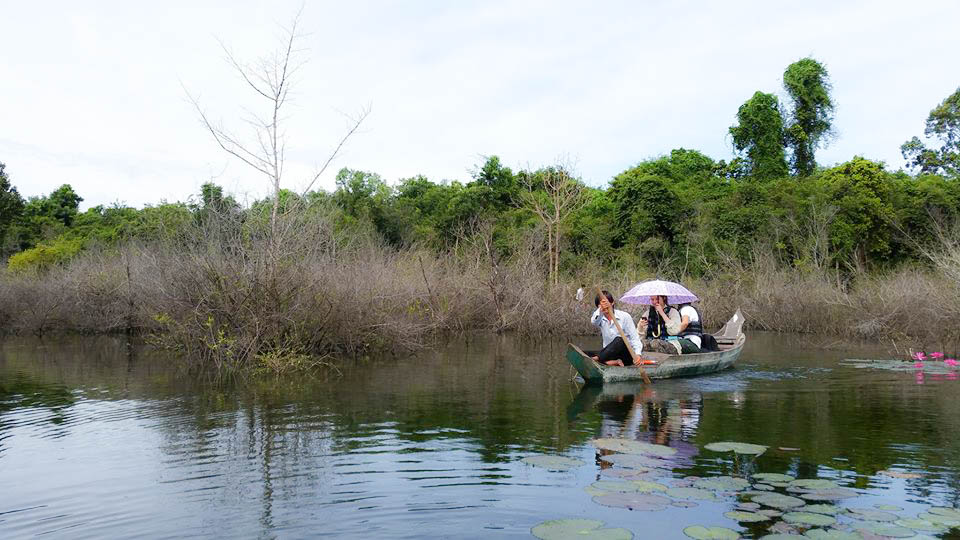 We then walked through the protected forest of Baray Reach Dak Community Tour. Baray Reach Dak was a water reservoir built in Angkor period, part of the hydraulic systems ancient Angkor was built with. On a boat tour, we were provided with umbrellas to provide us shades from sunlight. Despite the tour guide’s limited English, we were able to understand him and enjoy this beautiful heritage. This thoughtful and well-designed tour project was made possible by the involvement of our Environmental Ethic and Development lecturer, Dr. Georgina Lloyd. 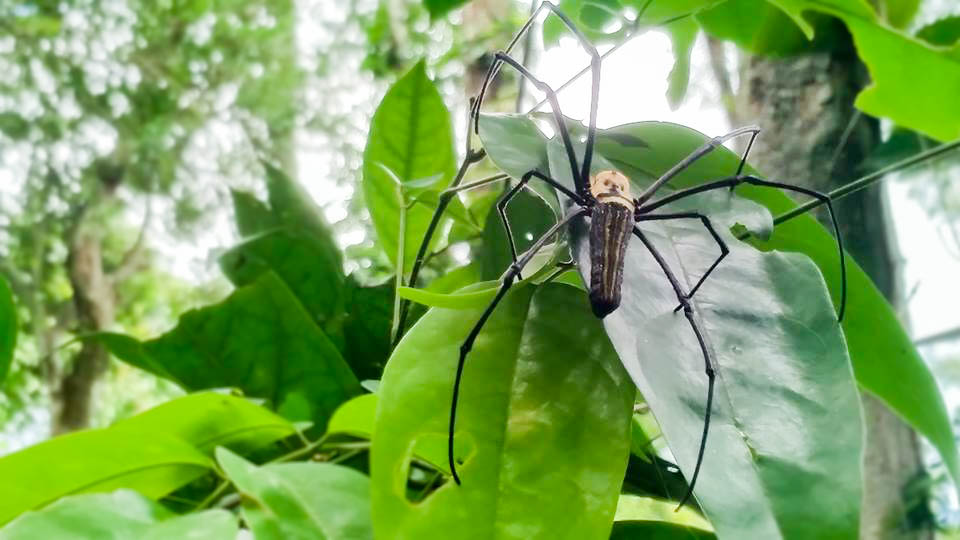 A couple days later we went on a langur trail on top of Phnom Kulen National Park.   As a newly developed community based ecotourism project, this trail is not well known to the public or tourists. We received a private tour from one of our guest lecturers who actually helped in the process of discovering the trail. As touristy as Phnom Kulen is, this forest trail offers a new perspective to this protected area. We were all prepared to hike on top of a mountain, little did we know we would be surrounded by such a beautiful biodiverse forest. From tall old trees, moving langurs, large spiders to bat cave, we’ve seen them all in this roughly three hours trail. Not to mention we were treated with a cool waterfall at the end. 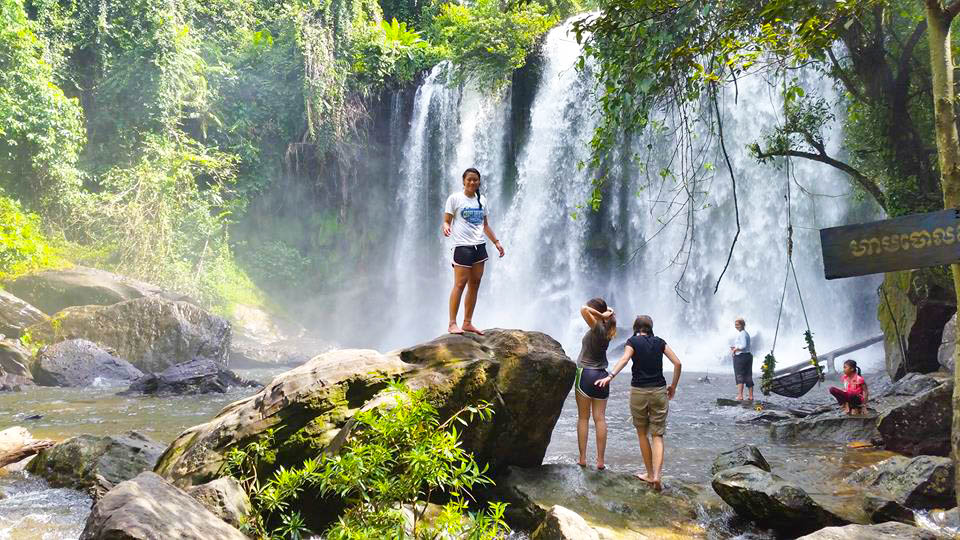 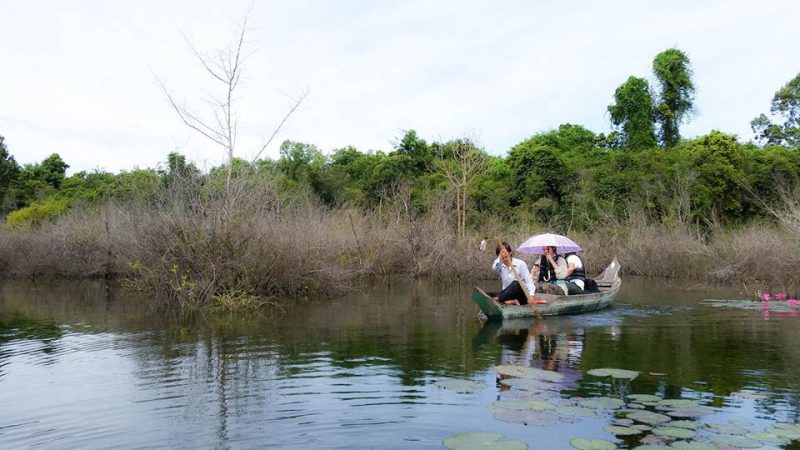 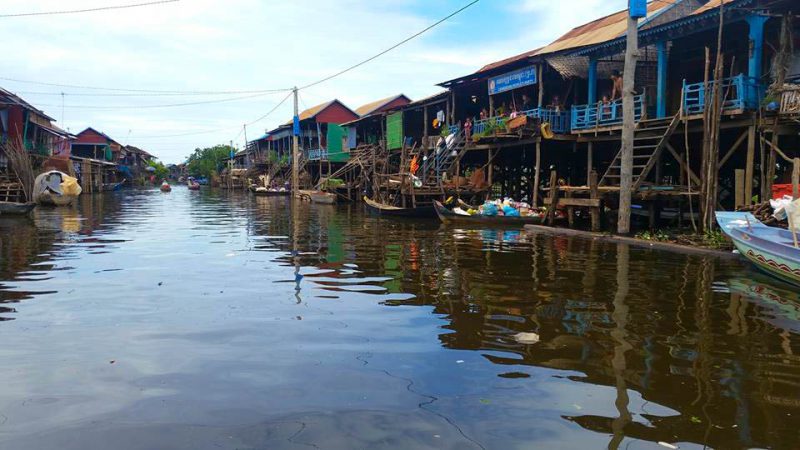 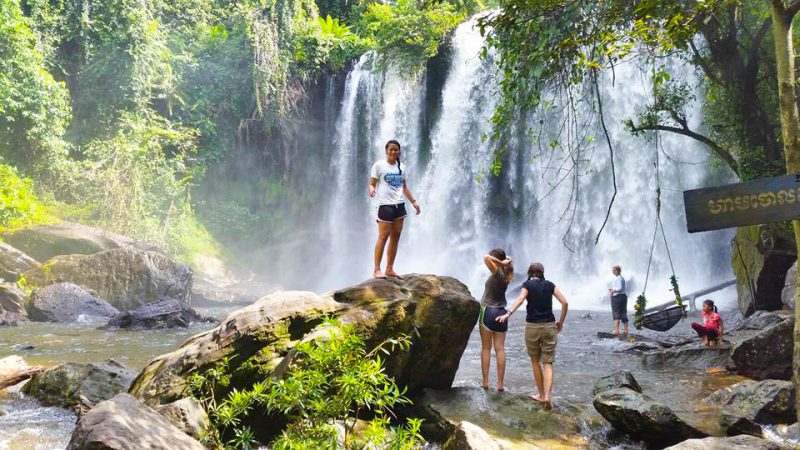 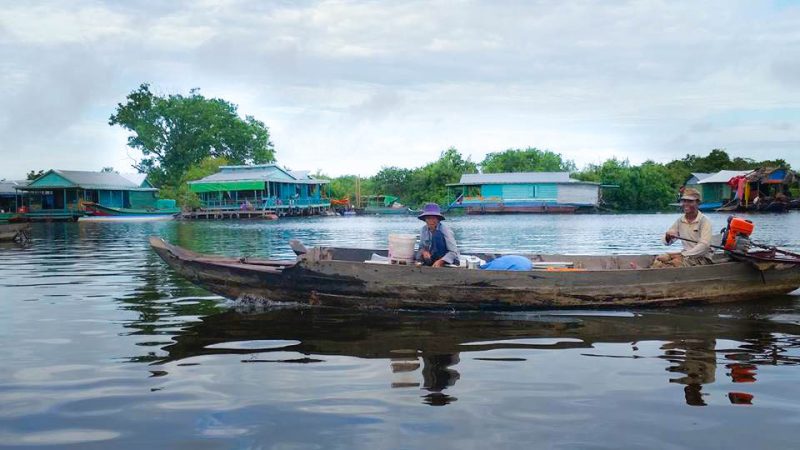 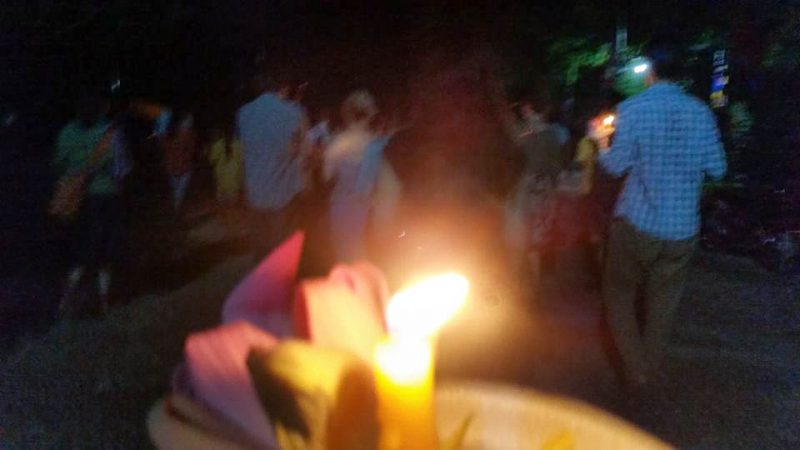 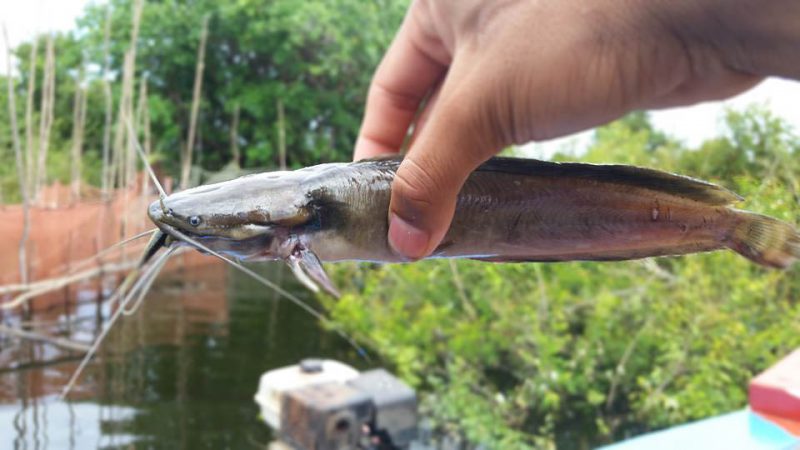 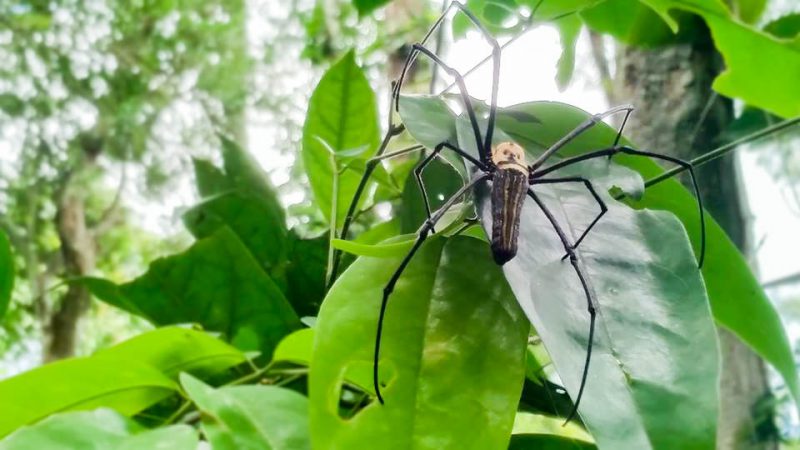