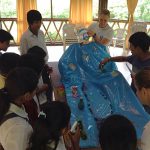 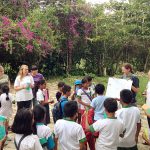 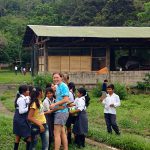 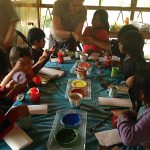 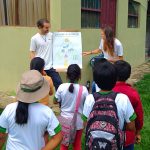 “Chifles bailadores! Chifles bailadores! Chifles bailadores!” shouts a group of eager 10 year olds as they rush past me into the mandala garden, followed by their chanting, equally energetic leaders. It’s the second day of an environmental camp planned and put on by SFS students for kids in the neighboring towns of Pillcopata and Patria, and everyone is in high spirits, especially this group. The self-named “chifles bailadores” or the “dancing plantain chips” are on their way to learn about watersheds and contamination at their last activity station of the morning. They’re a little sweaty and sport multi-colored paint flecks on their fingers, reminders from the previous stations and snack time, but their smiles are huge. 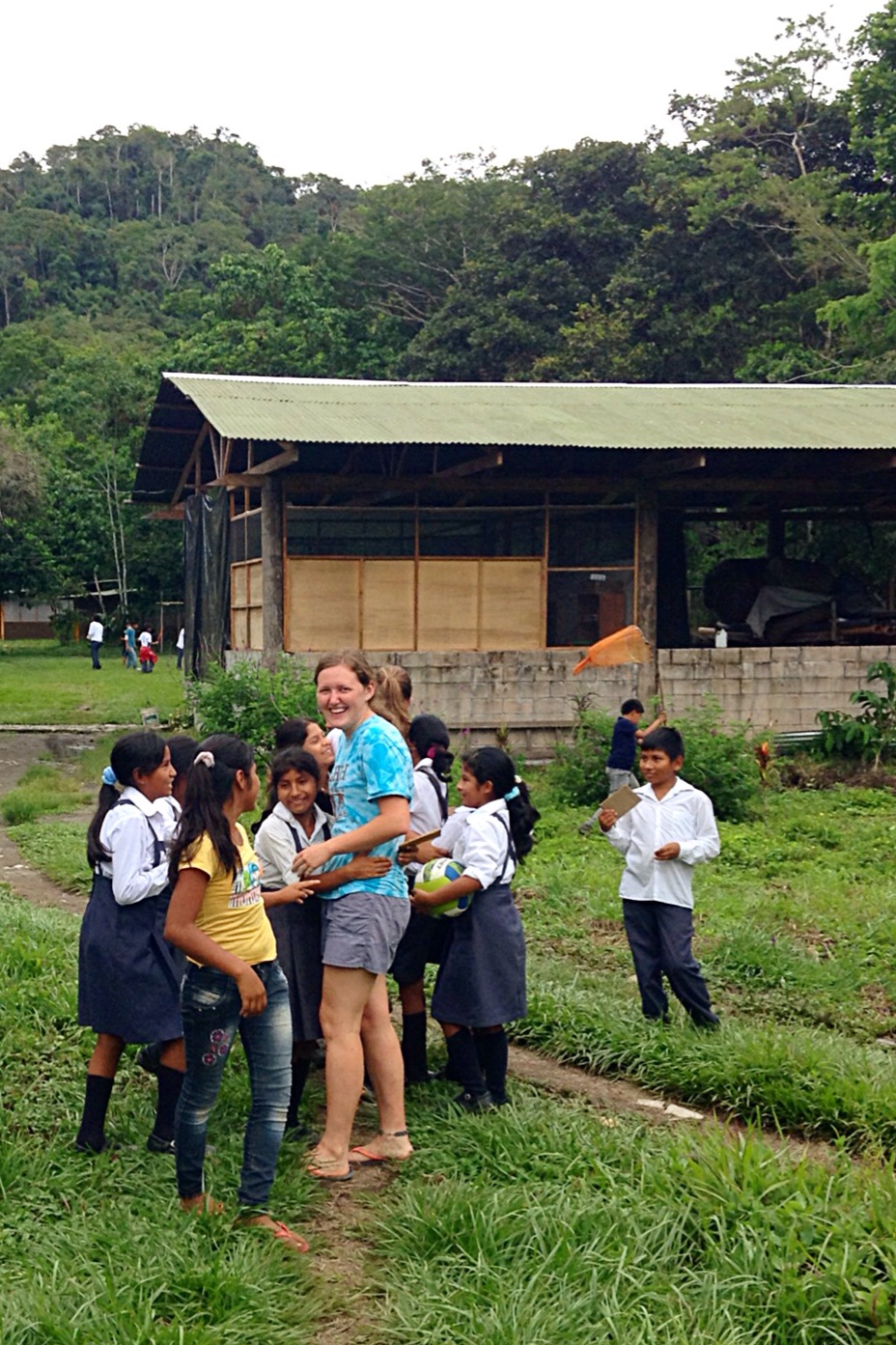 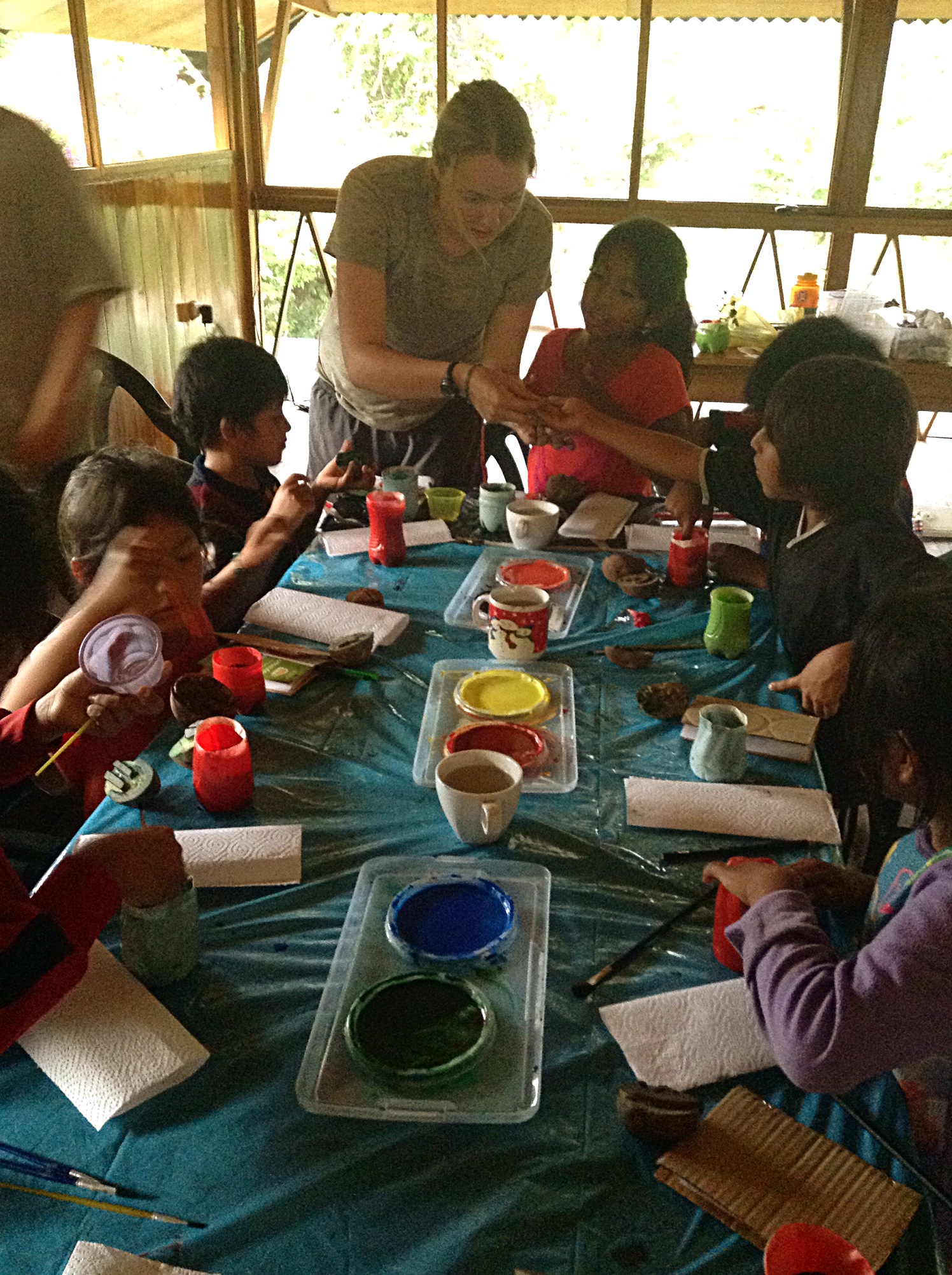 Their leaders take them through the garden, pointing out the sweet red aji peppers that the kids just planted in painted plastic bottles at the second station. At the sound of screeching all stop and point as Lorenzo and Diablo, our resident blue and gold and scarlet macaws, fly overhead. A few kids stop and sketch things in their recycled journals that the SFS students put together to help the kids record and share what they’ve learned. It’s evident that their first station (and probably favorite), a game where they sprinted around collecting food as jaguars, monkeys, tapirs, and macaws while learning about food chain dynamics, has tired them out. Yet, most of the kids are still bouncing on their toes as they pass rows of pineapples, peppers, and cilantro, stoop to peer into circular ponds with fish and water lilies, and walk beneath the draping vines of almost-ripe passion fruits. 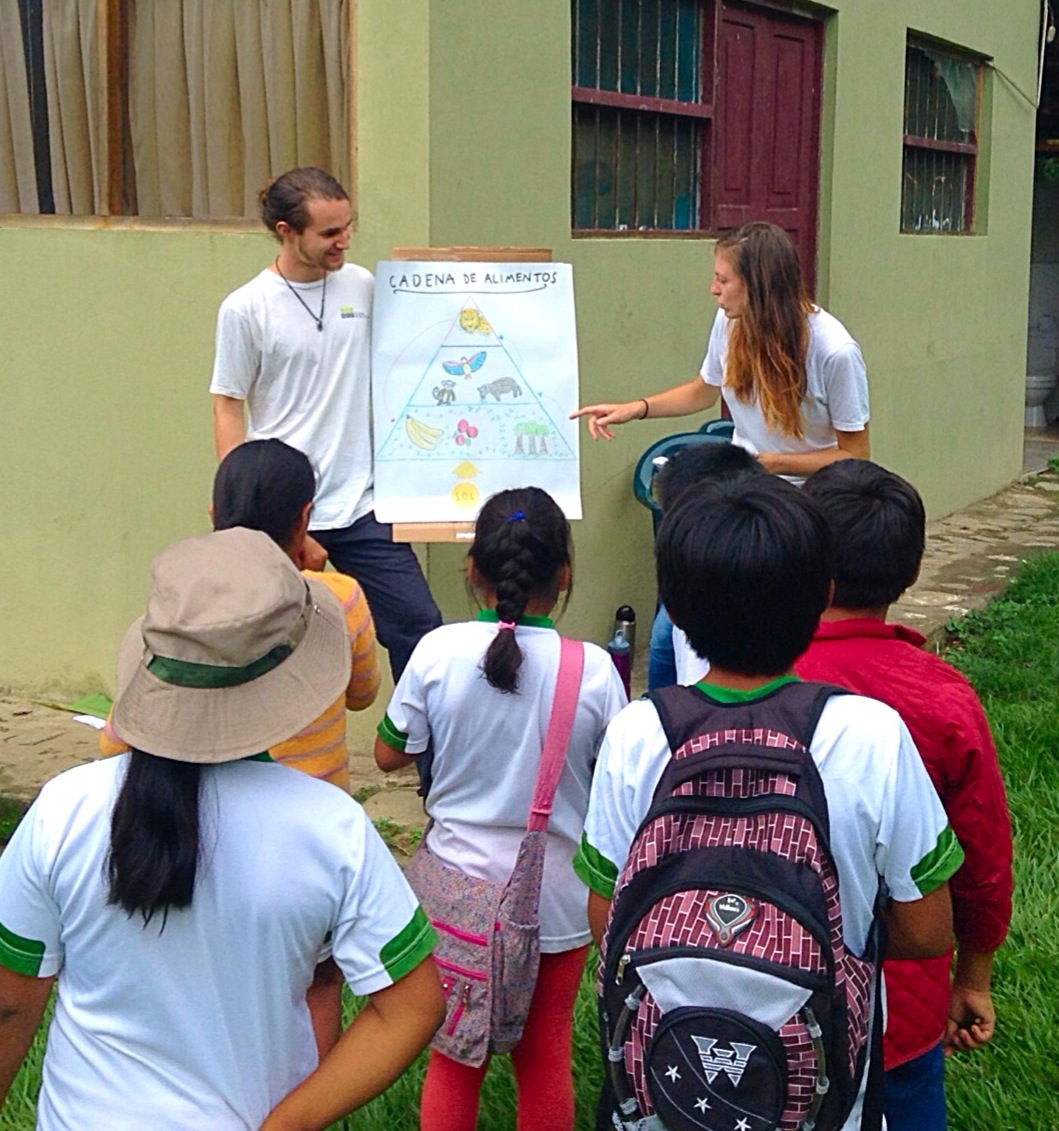 As the leaders slowly pull the group back together and walk into the maloca for the next station, the kids stop and stare at the large watershed model of our own Kosnipata Valley. The station leaders introduce the activity, an interactive story, where one by one the kids will participate as different members of the community. When called upon, the first student, amid giggles, pours “poop” into the valley where she as a cow herder would like to have her field. The second student, a cook, then pours his extra “cooking oil” where he wants to have his restaurant. So continues the story with new actors: taxi drivers, car mechanics, farmers, doctors, builders, and even the mayor. “Rain” falls on the watershed in the form of three excited kids with spray bottles and all of their contributions are washed down the tributaries into the Madre de Dios River. The result is a disgusting soupy mixture and looks of understanding as the kids see how all of these contaminants are washed into the same drainage basin. Yuck! 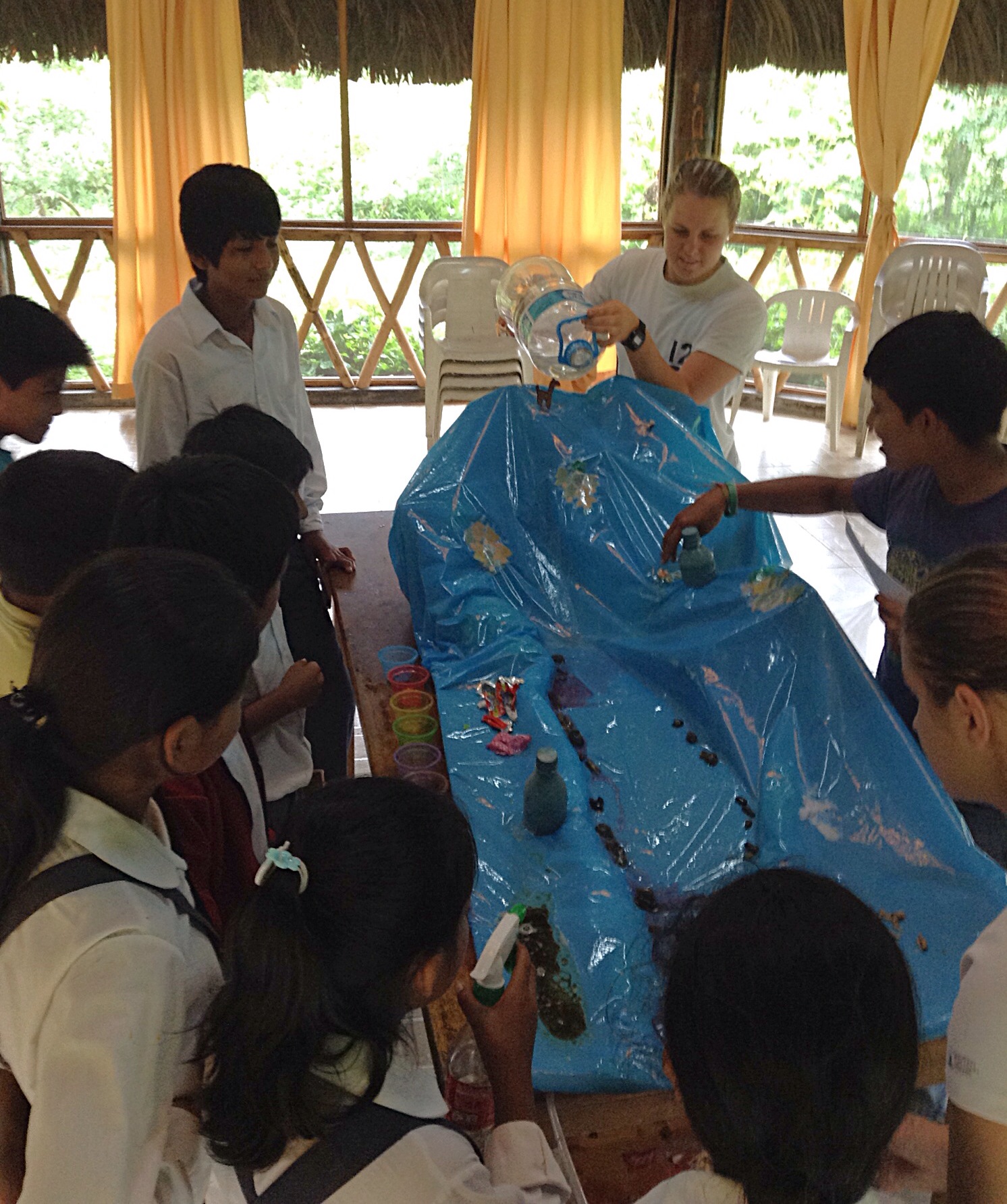 For the past two days Villa Carmen, our beautiful home on the Peru Biodiversity and Development in the Amazon program, had been turned into the location of an environmental camp for 90 energetic 8, 9, and 10 year olds. This last morning group of local students, the third of three groups, was our favorite – kind, excited, engaged and eager to learn and share. At wrap-up as we stood in a large circle, all 45 of us, kids, SFS students, and staff alike, the “Chifles bailadores” group shared with the larger group the poster they drew of their favorite experiences from the morning.  In that moment, I was so proud: proud of the young students for eagerly participating and sharing what they learned and even more proud of the SFS students for being positive leaders and working together to organize a memorable experience for everyone involved. It was a lot of work but I’m already looking forward to next semesters’ Amazonian environmental camp! 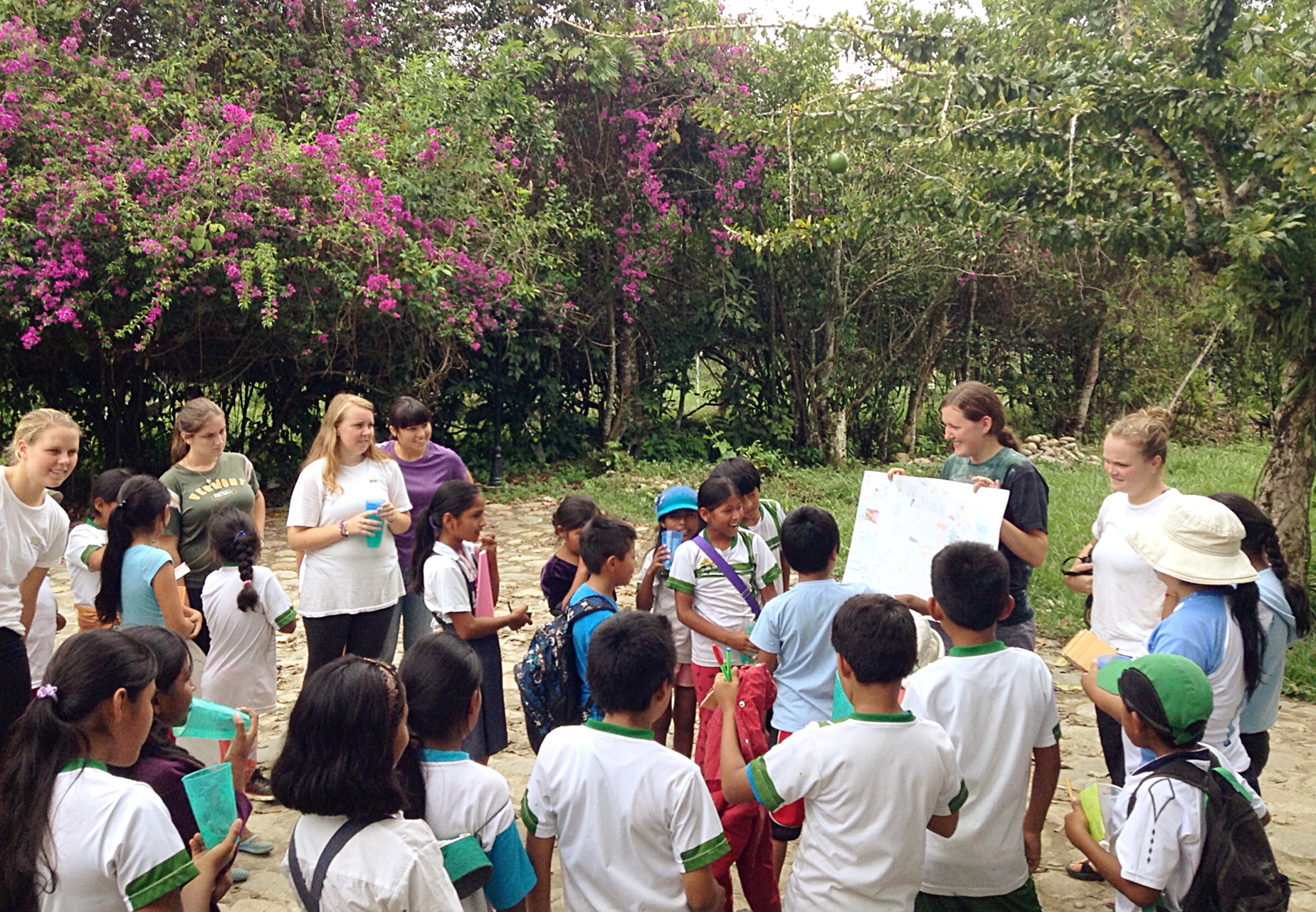 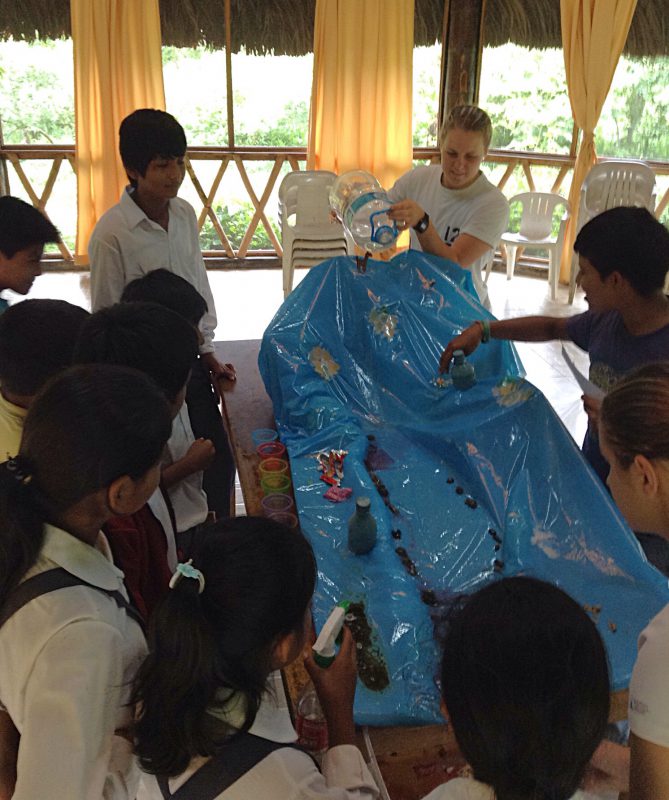 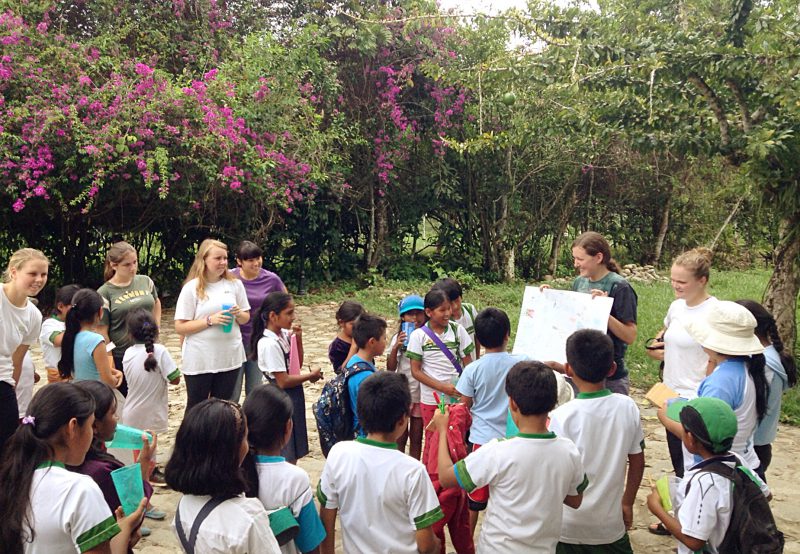 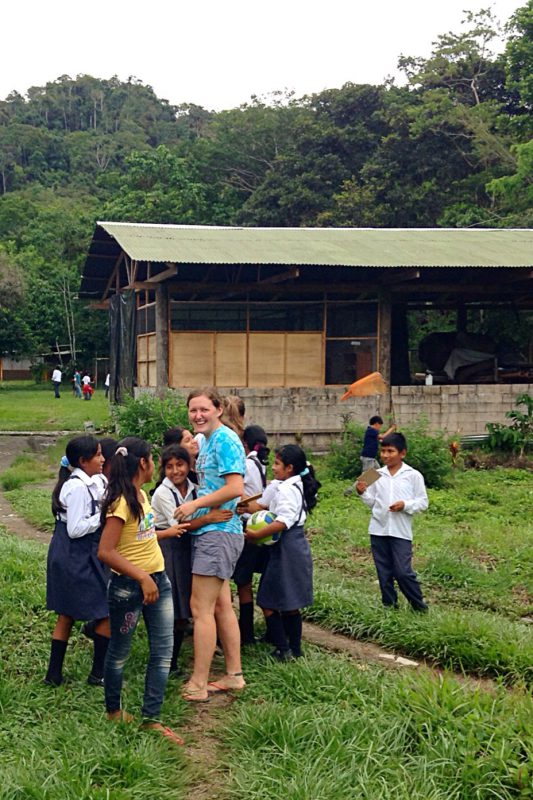 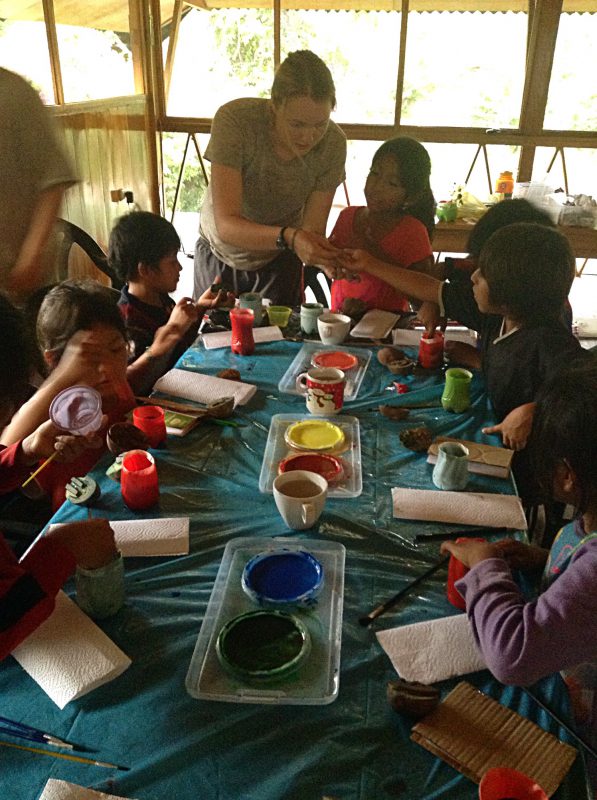 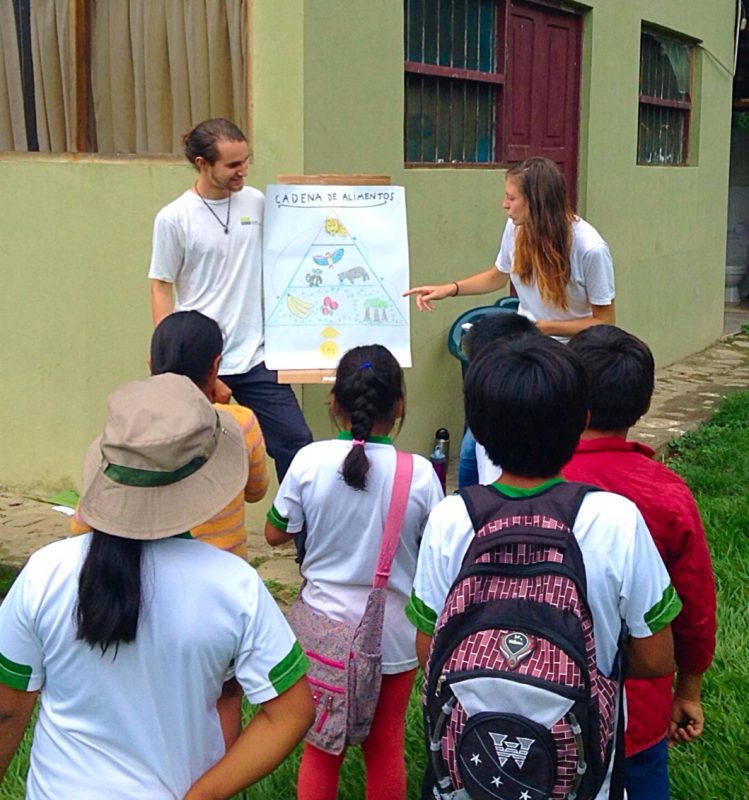