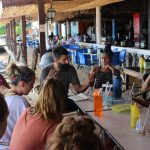 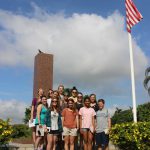 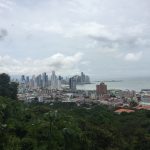 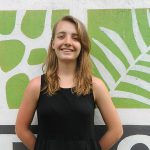 Panama: A Country of Contrasts

The small, yellow airport was nestled in between a cluster of other buildings painted in a similar, “tropical” way. All of the colors of paradise- oranges, reds, blues, and yellows- were framed by a lush, green backdrop. The small propeller plane that we had taken to get to Bocas idled on the tarmac just long enough to unload its cargo, and then it swiftly took off for Panama City once again. The difference between Panama City and the Bocas del Toro archipelago where we had just arrived was so drastic that it was hard to believe that a few hundred miles and an hour plane ride separated the two locations.

Panama City was stunning in its modernity. Glassy skyscrapers crowded the city’s coast line, forming a fringe of wealth that encircled the nation’s crown jewel and symbol of pride: the Panama Canal. The canal itself was also impressive. It was astounding to see the sheer number of shipping vessels pouring in from the ocean to transverse the isthmus and the millions of tons of cargo that they carried. 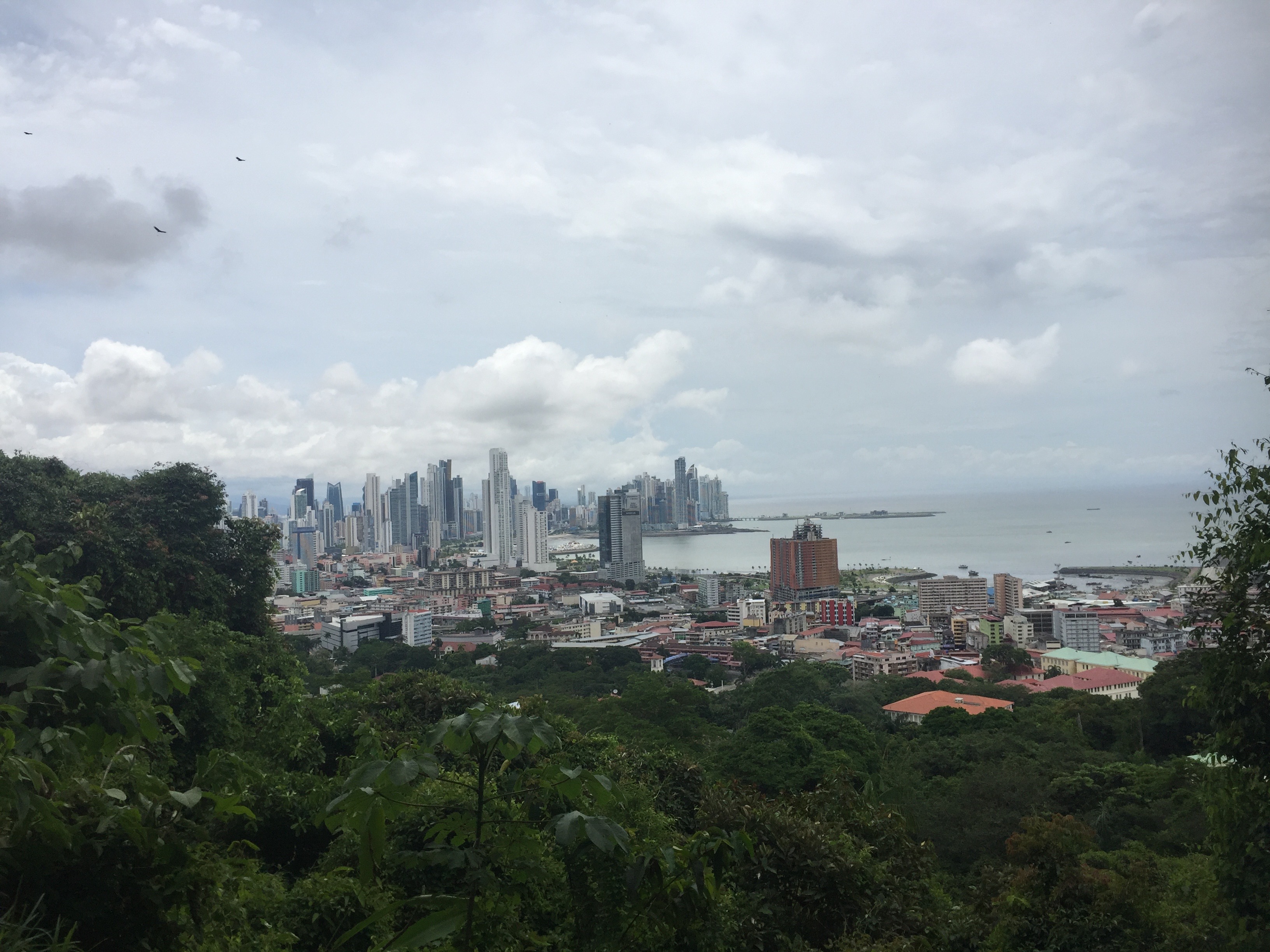 Lookout point on the walk up to Ancon Hill. Photo by Emily Penaranda

However, the real spectacle was not so much the physical structure itself, but instead, the atmosphere surrounding the canal. Only fourteen years ago, the United States government transferred ownership of the canal to the Republic of Panama, and since that time, Panamanians have not only run the canal effectively, but they are also close to finishing an expansion project that aims to accommodate bigger ships. In general public opinion, the canal is a symbol of Panamanian strength. It is what will usher the country into the next generation. That national hope for the future is especially palpable in the city.

Not far from the imposing skyscrapers and technologically-advanced canal, the older, colonial portion of Panama City, Casco Viejo, is less modern, but in many ways, equally as sophisticated. The buildings of this district, from my perspective, seemed more elegant than the steel and glass structures in the newer, more ostentatious city districts. There is an air of history and rejuvenation that hangs over Casco Viejo. Recently, more and more of the district’s buildings have been renovated and restored to their former architectural glory. The old quarter is diverse and stunning. Arched windows, iron-wrought patios, stucco walls, and an array of other features grace the buildings. Spanish and French influences are distinctly present and remind the visitor of Panama’s cosmopolitan history. 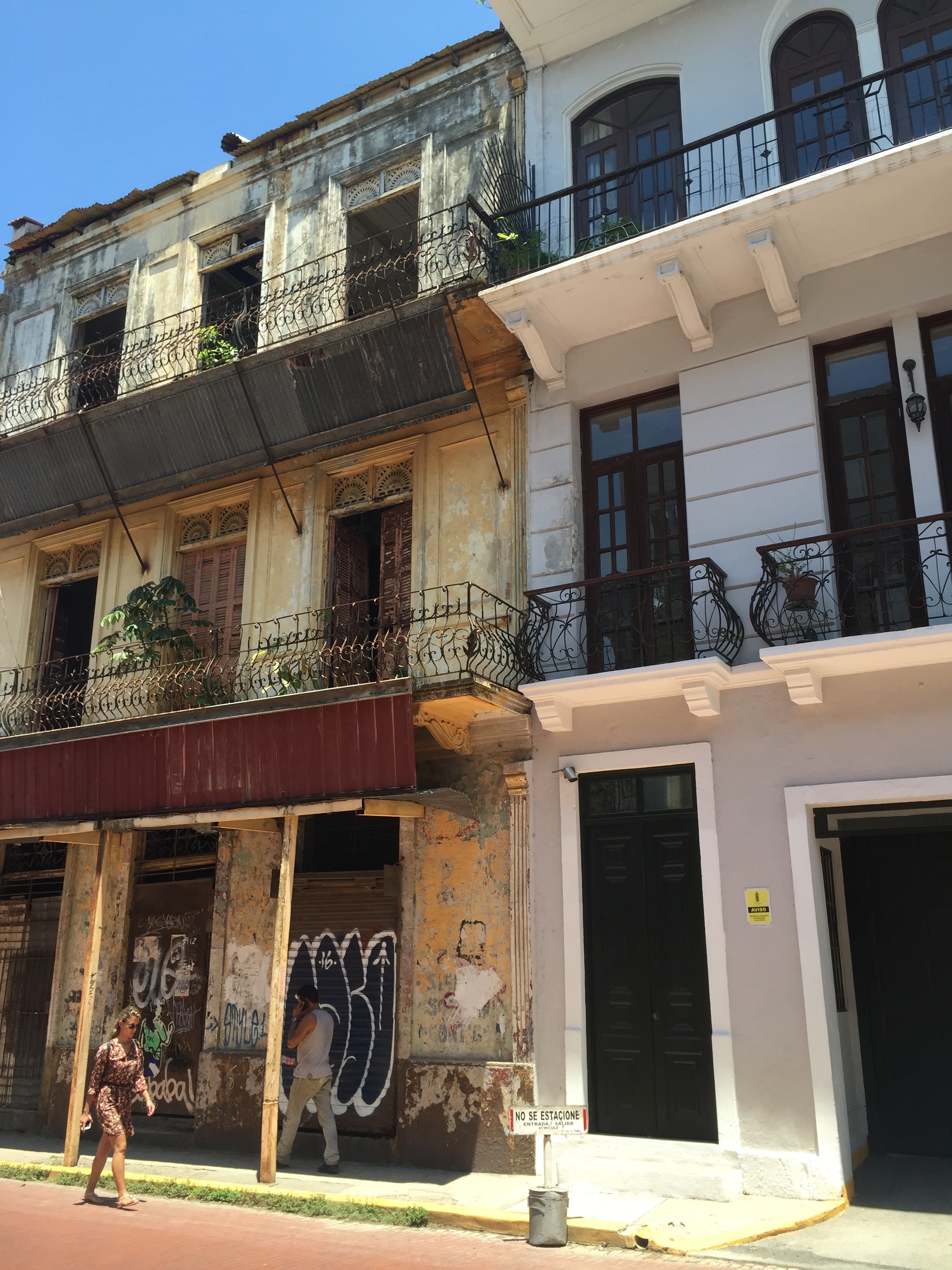 A day later, however, standing on the tarmac in Bocas del Toro, just a few hundred miles away, I felt like the old port city of Casco Viejo and the modern wonders of Panama City were very far removed. With its tall high rises and bustling streets, the city screamed “progress”. Bocas by comparison was a sleepy tourist town with a laid back Caribbean surfer vibe and beautiful beaches. Yet, after exploring the town a little bit more, I soon came to the realization that “progress” had also come to Bocas, and not in a pleasant way.

Bocas del Toro had historically been a quiet archipelago home to Afro-Panamanians, indigenous Ngäbe, and a few expats. However, in the late 1990s things began to change rapidly. By word of mouth and glowing newspaper articles, the news spread that Panama had its own little slice of Caribbean “paradise”. Rather suddenly, Bocas del Toro was thrust onto the world map and tourists from around the globe and especially from the United States flocked to the islands with their khaki shorts and glaringly white tube socks. This was why I had traveled here in the first place: to study these visitors and how their presence affects the cultural and environmental well-being of the Bocas islands.

At face value, the tourist boom looks great. In the past twenty years, more money than ever has flowed into the Bocas economy, and the islands, with their palm trees and turquoise waters, truly do appear to be a paradise. However, when our class took a tour of Bocas town, I quickly realized the gilded nature of the tourism industry here. The defining moment for me came when our small group walked away from the town’s picturesque coast and further inland onto the side streets of town. We passed beautiful hotels, state-of-the-art dive shops, and classy restaurants. Gradually however, the pretty façade melted away and we began seeing unpainted houses on stilts stacked one on top of the other in a mish-mash of concrete and often-decaying wood. The houses looked cramped and unfurnished. This is where the locals lived. Tourism had pushed them out of their waterfront property, and now they were living in close quarter huts built over a marsh, away from the eyes of foreign tourists. Even more disturbing was the fact that the marsh was the island’s sewage dump site. Locals who had once had run of the island were now literally living on top of a tourist cesspool.

Foreign capital, despite its usefulness, has always caused problems in Panama. Back in the early 1900s, it was an issue when the United States took over the Canal Zone and essentially cut Panama in half by establishing an American territory around the Canal. Now, the foreign presence and control is more subtle and diverse but no less influential, and harmful. Americans, Canadians, Germans, Italians, Israelis, and a whole slew of foreign nationals have come to invest and enjoy a privileged position on the isthmus. Panamanian locals and indigenous people, it seems, have been unable to stop the million dollar foreign developers who have suddenly displaced them and who are financially reigning over the Bocas del Toro archipelago. Similarly, Panama City is struggling to combat the money laundering that foreigners conduct using the city’s new real estate market and its financial system.

It is difficult, I began to realize, for a country to determine its own future and care for its citizens when money and power is spilling in from beyond its borders. It seems almost impossible for Panama to throw off the influence of foreign investors and regain control of its own economy, but maybe if visitors such as myself begin to act like they are guests in a country that is not their own, it would alleviate the strain. Being a conscientious tourist and being aware of the unique socioeconomic and cultural history of Panama could not only enhance your visit but it could also mitigate the impact of tourism on Panama’s politics and unique culture. 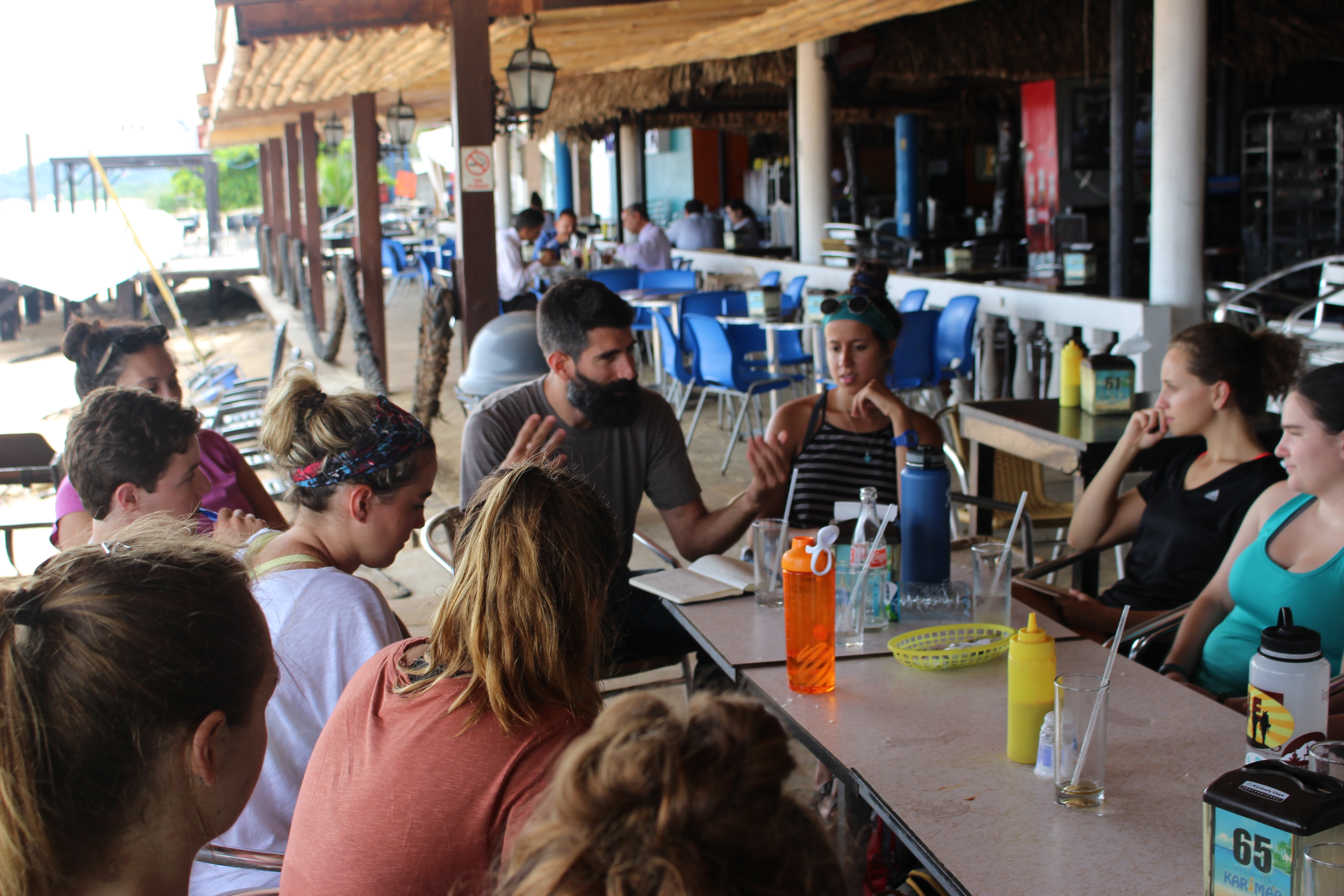 Discussion after lunch in Panama City. Photo by Cinda Scott 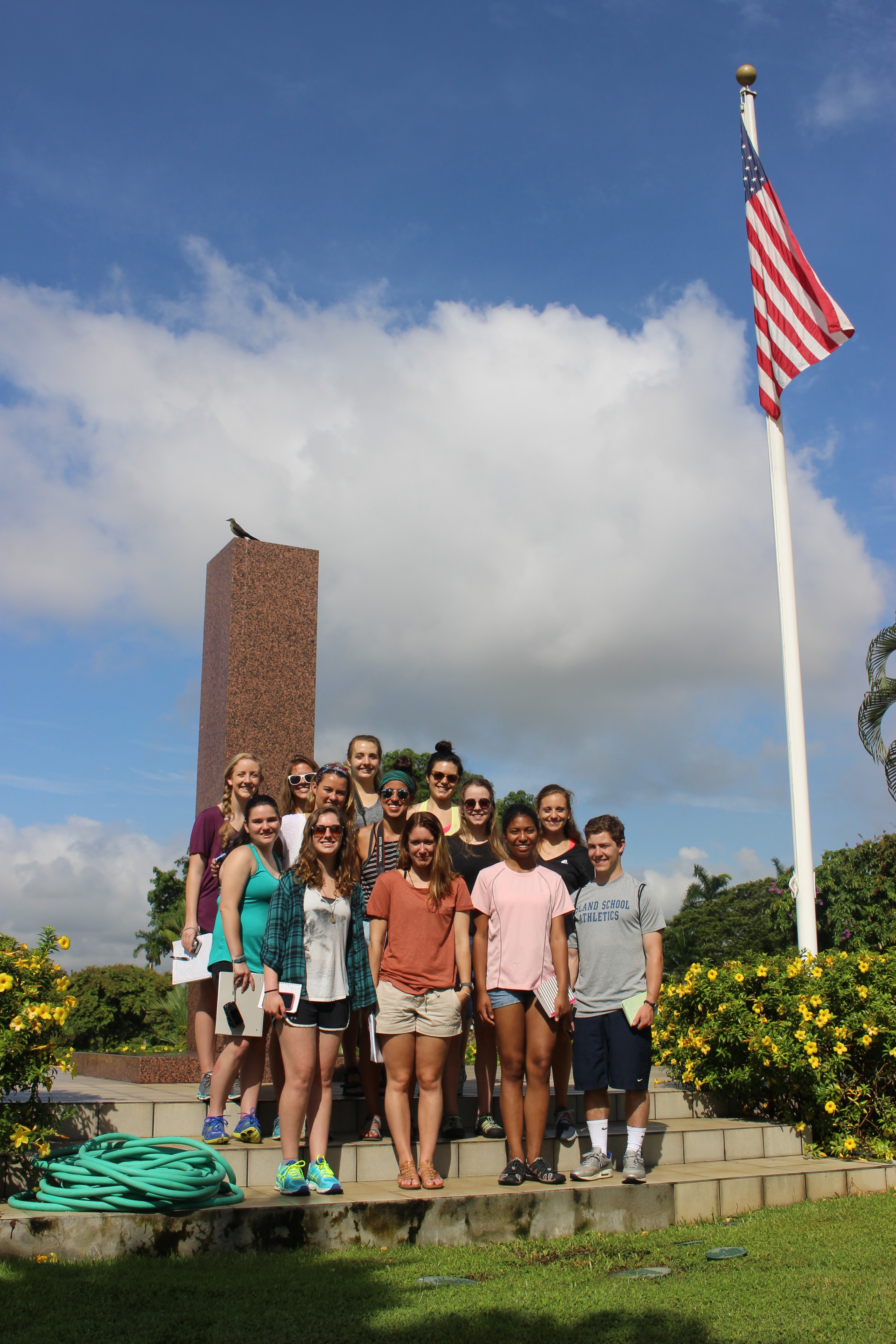 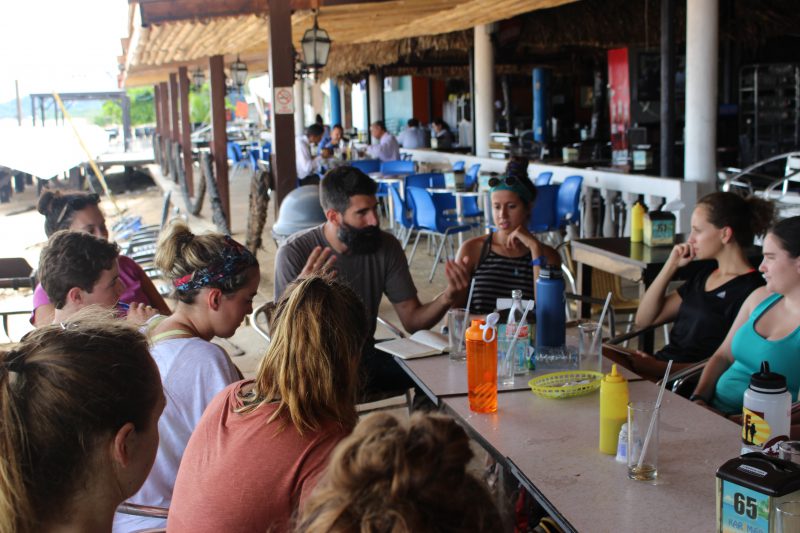 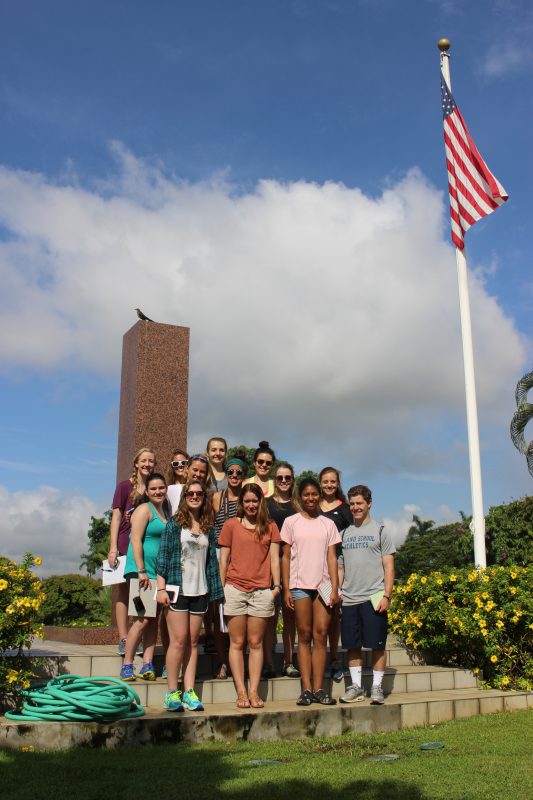 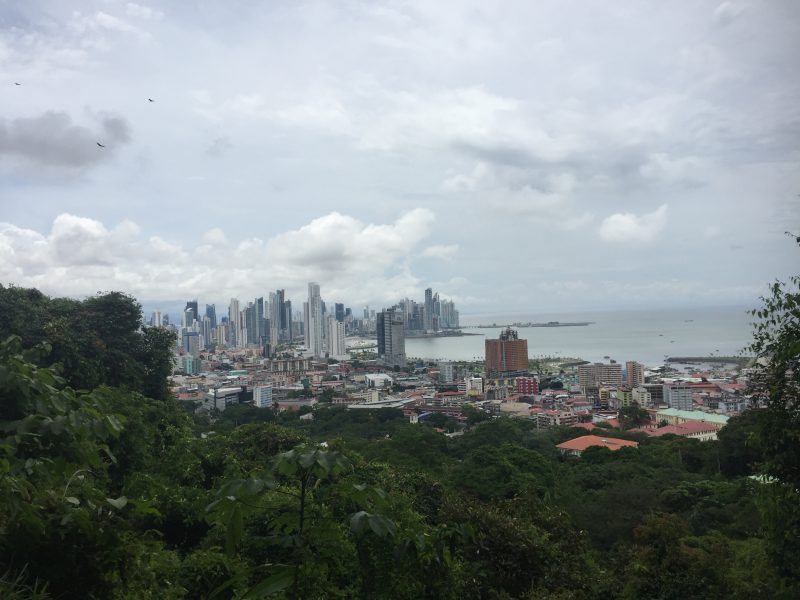 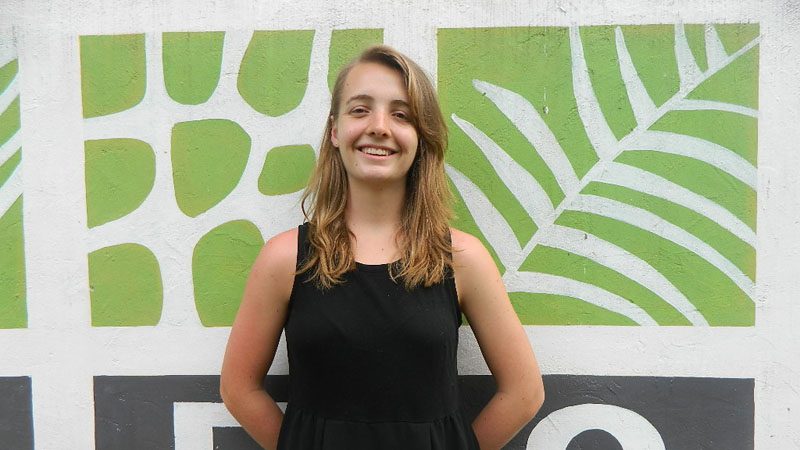