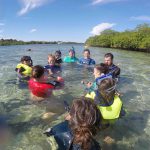 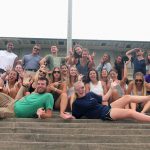 High on the walls above the rotunda pictured below, are a series of four paintings depicting scenes from the construction of the Panamá Canal. The paintings provide us all with a snapshot of the tremendous effort it took to engineer and excavate the canal. Our program begins with a focus on the Panamá Canal and its significance because this single stretch of water that connects the Atlantic to the Pacific continues to impact the world’s people and the environment. As magnificent as the Panamá Canal is, in its construction and continued world reliance for trade, both its history and its future force us to consider our relationship to it and the environmental consequences that have resulted from our dependence on it. 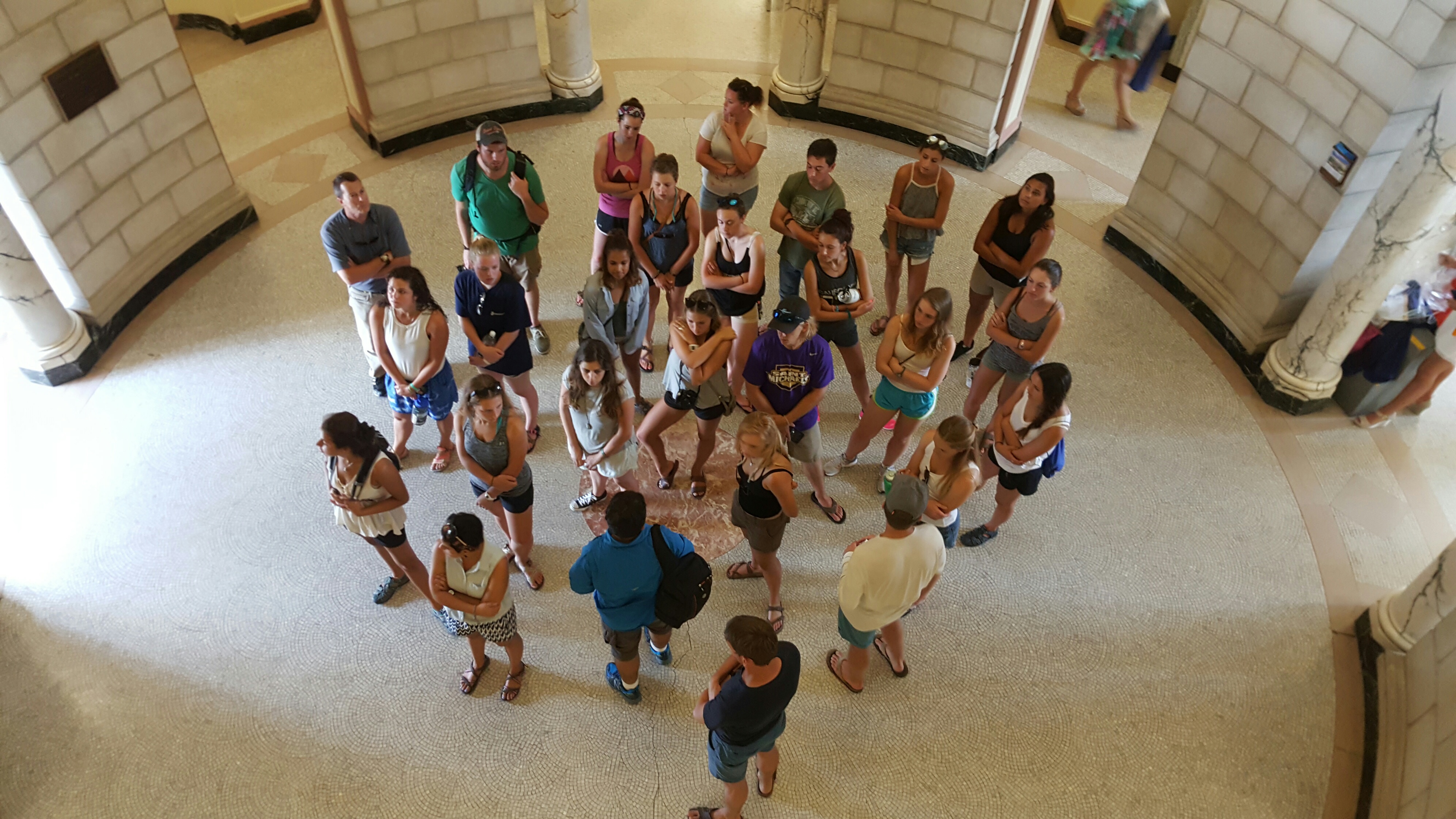 As I snapped the photo of our Fall 2016 cohort standing in the rotunda of the Panamá Canal administration building, I thought to myself, “In 100 days, these students will not be the same.” Later on in the day, I overheard a few students discussing how cool it was to see the containers floating by on ships in the canal that could be carrying products that they use every day, such as clothing or things they’ve ordered from their favorite online shopping outlet. Hearing the students come to the realization on their own that they are part of a much larger global system of trade and economics was an important first step in preparing to ready themselves for the journey upon which they were about to embark.

Though to many students, Panamá may seem worlds away from what they are accustomed to in the US, culturally, socially, environmentally and economically, the canal reminds us that we are indeed much more connected than we think. It is precisely this concept of finding connections in unlikely places from which our program takes root. For example, how do our economic decisions, such as purchasing items made in another region of the world, impact people at a local level, such as in Bocas del Toro? Through studying the Panamá Canal, its history and US-Panamánian relations, students not only receive a foundation for learning about the environment of Panamá, but also a deep understanding of how global scale relationships have major impacts on small communities such as Bocas del Toro.

Currently our students are working through understanding the cultural, social, and economic systems of Panamá whilst exploring the natural marine and terrestrial environments. Practicing both natural and social science in unison is a critically important aspect of our program. For example, in Bocas del Toro, only eight marine park rangers guard the Isla Bastimentos National Marine Park, a Marine Protected Area (MPA), approximately 33,000 acres in size. Enforcement of fishing regulations is therefore extremely difficult. Students will be challenged this semester to think about how the boundaries of the MPA, created in 1988, have had lasting and impactful effects and consequences for the people in Bocas del Toro who depend on the area as a food source. Questions that students must consider are many, for example, What is the cultural significance of fishing in Bocas? How can Bocas del Toro protect its coral reef ecosystems while at the same time supporting an economy dependent upon tourism and fishing? What are the economic benefits of an MPA in Bocas del Toro? Moreover, how has tourism impacted the use of the MPA? Finally, how did fishing practices in Panamá in the 1980s impact the design and development of the MPA? 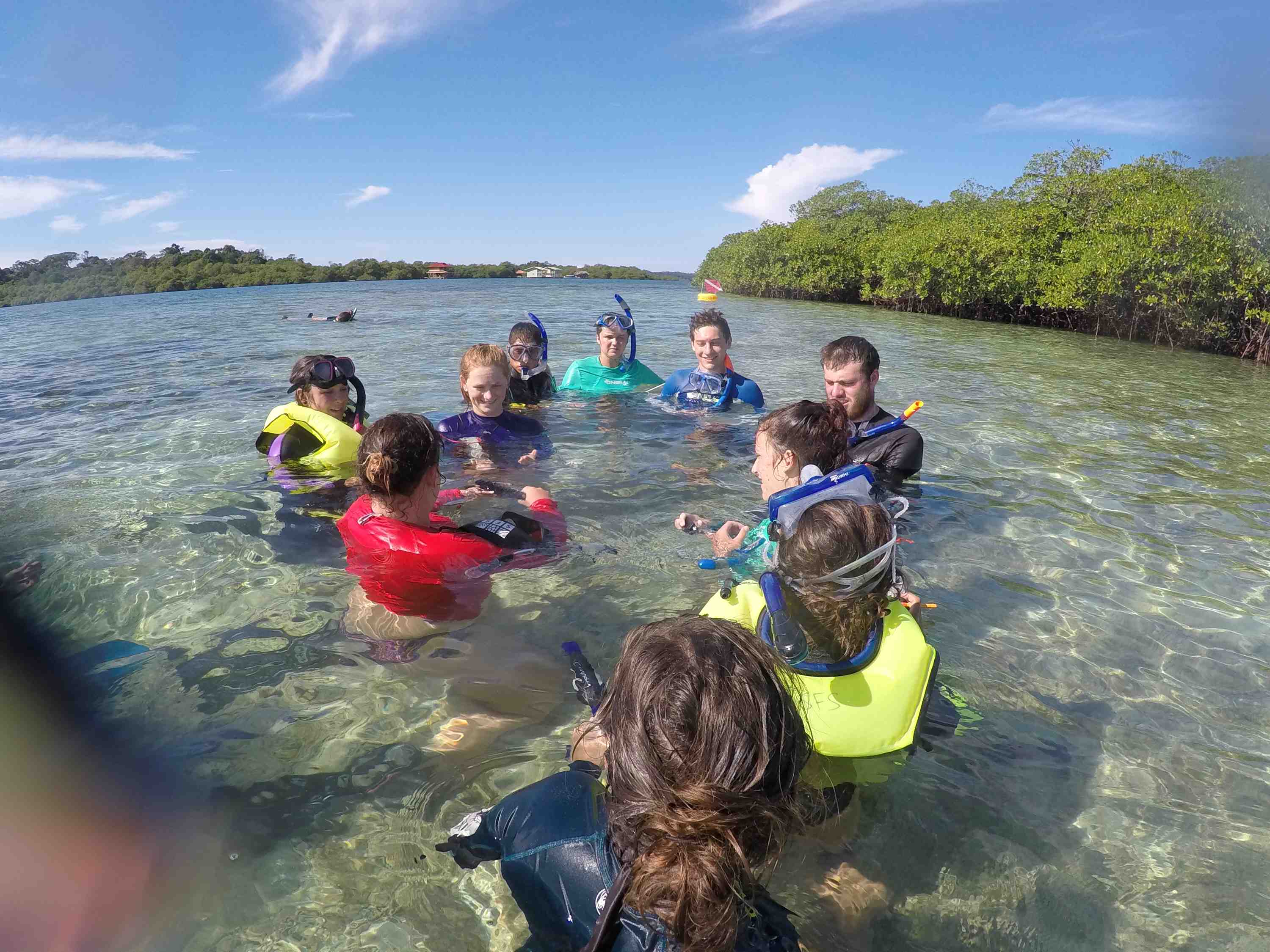 As students make their way through the TIBS curriculum, whether in the rainforest, visiting a banana or cacao farm or learning by doing in the mangroves, I hope they remember that first day in Panamá City, standing in the rotunda, staring up at the four paintings of the canal construction. Why? Because to answer the questions above regarding the MPA and many more, students must stand at the nexus between culture, economics, marine and terrestrial ecology, research and society. Additionally, they must always remember that though they are visitors here in Panamá, they are connected to Panamá in a rather intricate way. The Panamá Canal not only provided a secure trade route for commerce, but also later provided for the development of the tourism industry in Panamá, which in turn generated tourism in other areas of Panamá such as Bocas del Toro. The overuse of ecological spaces, and in particular the overfishing that occurred in the Bocas del Toro region in the 1980s to provide fish to other areas of Panama and the world via the Panama canal, resulted in the need to create a Marine Protected Area. Today, tourists and Panamanians alike now visit the MPA in Bocas del Toro with the hopes of seeing a diverse array of coral and fish species. The question remains, however, whether or not the MPA can be sufficiently managed in order to protect vulnerable habitats and species for generations to come. Everything is connected.

Through coursework, field trips, meeting new people in town, talking with local experts and exploring Bocas, there is no question that this group of very focused, inquisitive and deeply impassioned students will return home with a greater sense of how they are connected to this small nation called Panamá. The TIBS curriculum requires students to make a shift in their thought process early on in the program in order to be able to receive information and to then practice and apply it in the field. The first few weeks are by far the most challenging part of the program for many students due to making adjustments to a new environment and also actively making a shift in their approach to learning, but the growth in understanding that I am very lucky to witness is truly incredible to watch. I look forward to continuing to see how the TIBS Fall 2016 cohort handles each and every challenge that comes their way. 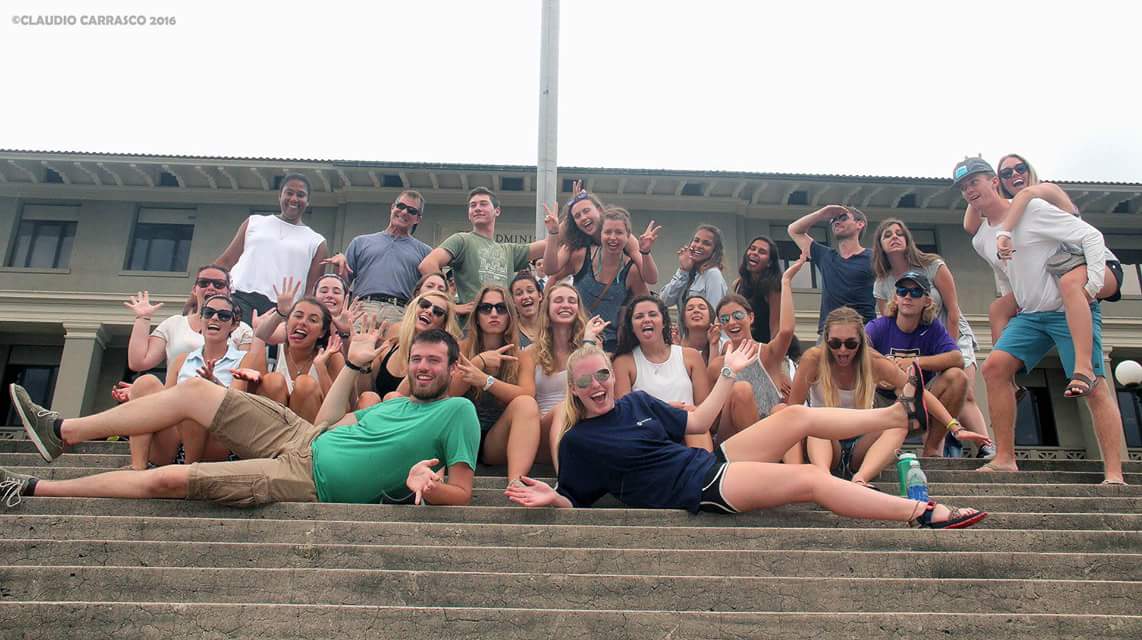 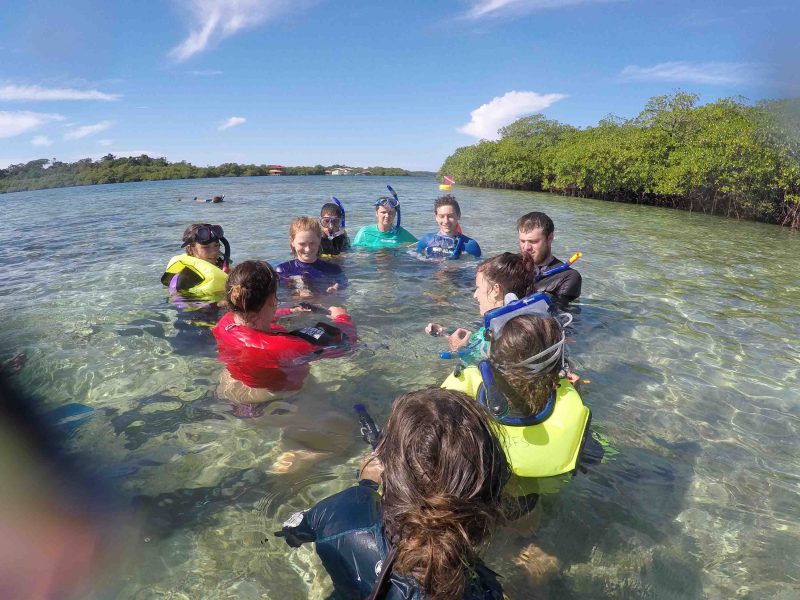 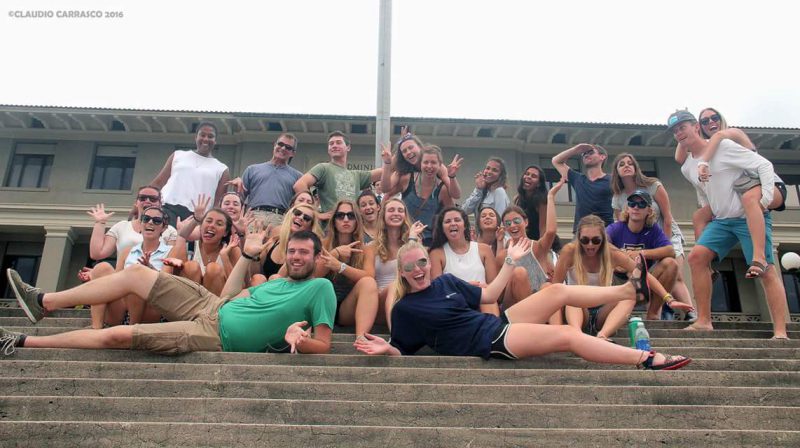