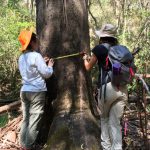 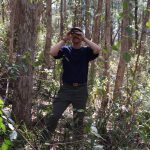 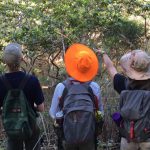 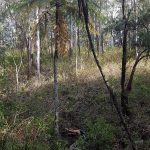 Up Close and Personal with the Yellow-Bellied Glider

With support from SFS-HQ, we developed a crowdfunding project in March 2016 to support research on methods to assess population sizes of Yellow-bellied gliders based on identifying individuals by their calls. The plan was to develop a field mini-lab that would record calls and take infrared photos from gliders. Using special software, I plan to identify call traits that can be used to identify individuals and therefore would allow the estimation of the number of animals within a family group. Knowledge on population sizes is essential to computing population trends of a species, which assists in conservation planning.

The crowdfunding campaign was successful, and many of the former CRS students who had been out in the forest observing gliders with me contributed to the success. However, it took a while to get a prototype of a sensitive sound recording device ready. Stan, the physicist who is building the device, had to overcome some challenges. The material was quickly purchased and the assemblage of the parts was not a great hurdle, but when it came to make the assembled parts working together, some unforeseen problems emerged. The program, which runs the data recording and allows the setting of a certain recording time, was running smoothly on the PC, but it had to be tweaked to run as a ‘headless’ system, i.e. no name, no monitor or keyboard, for operating in the field. It was set to save data as .wav files on an external USB stick from which they could be transferred into the analysis software.

At the beginning of October the first prototype of the recording device was ready to be tested in the field. This was close to the time of a field exercise during which I planned to collect more data on the behavior of gliders with students of the current CRS semester. Glider observations require sitting still at trees which gliders use to extract sap from. When gliders approach these feed trees and while feeding from them they emit various calls which can be recorded. 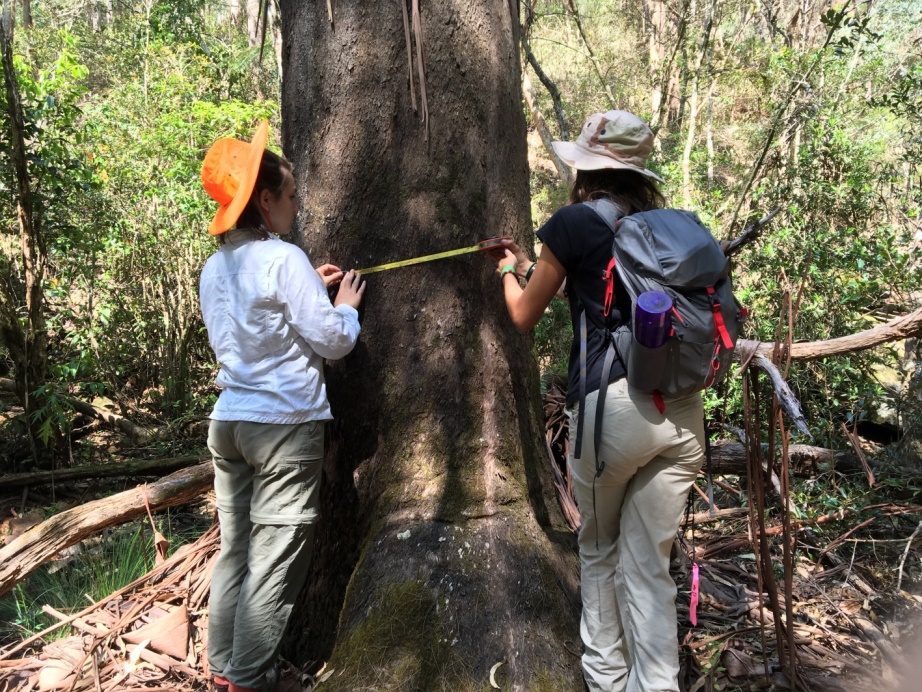 Sylvie Finn and Marley Guy measure the diameter of the Eucalyptus grandis, also known as Rose Gum. Rose Gums are the species of choice when it comes to Yellow-bellied gliders finding dens 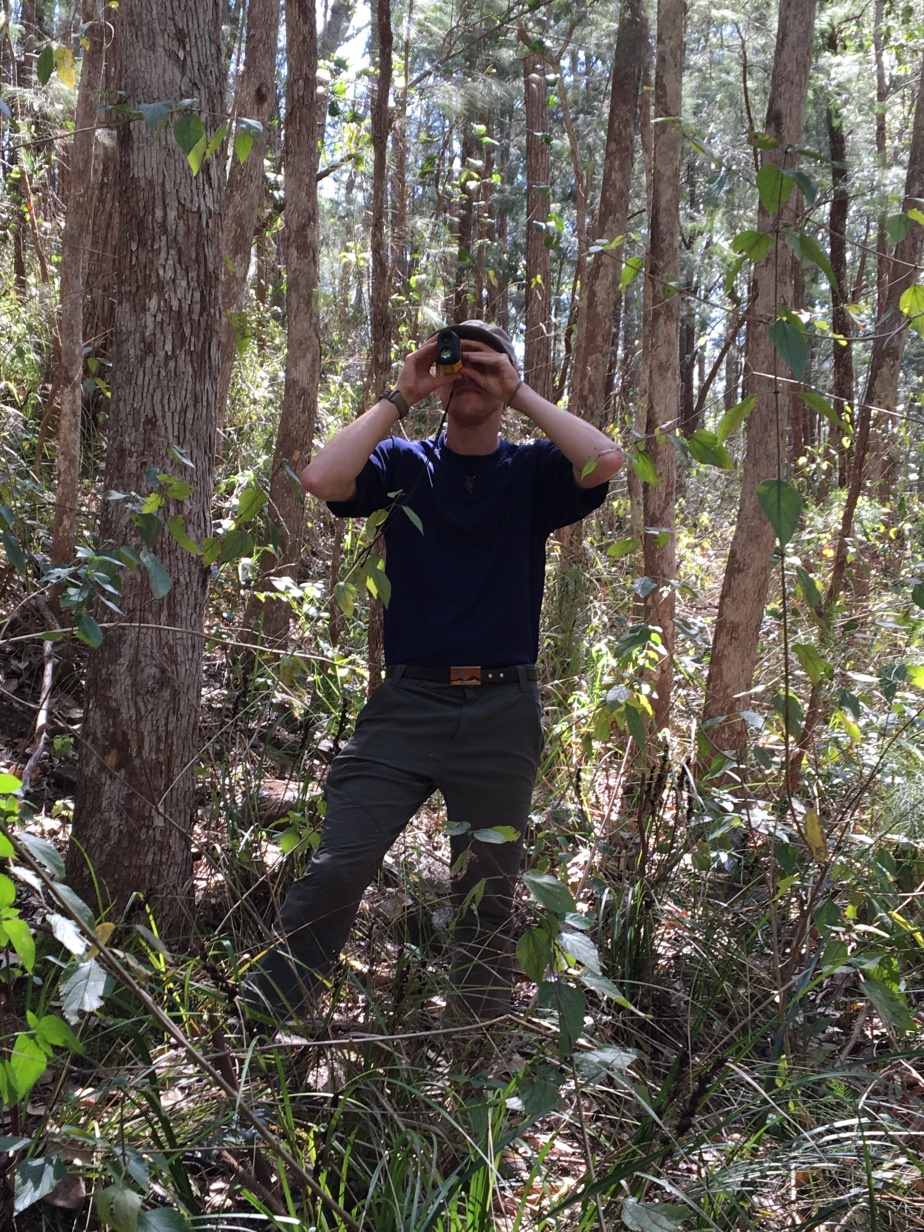 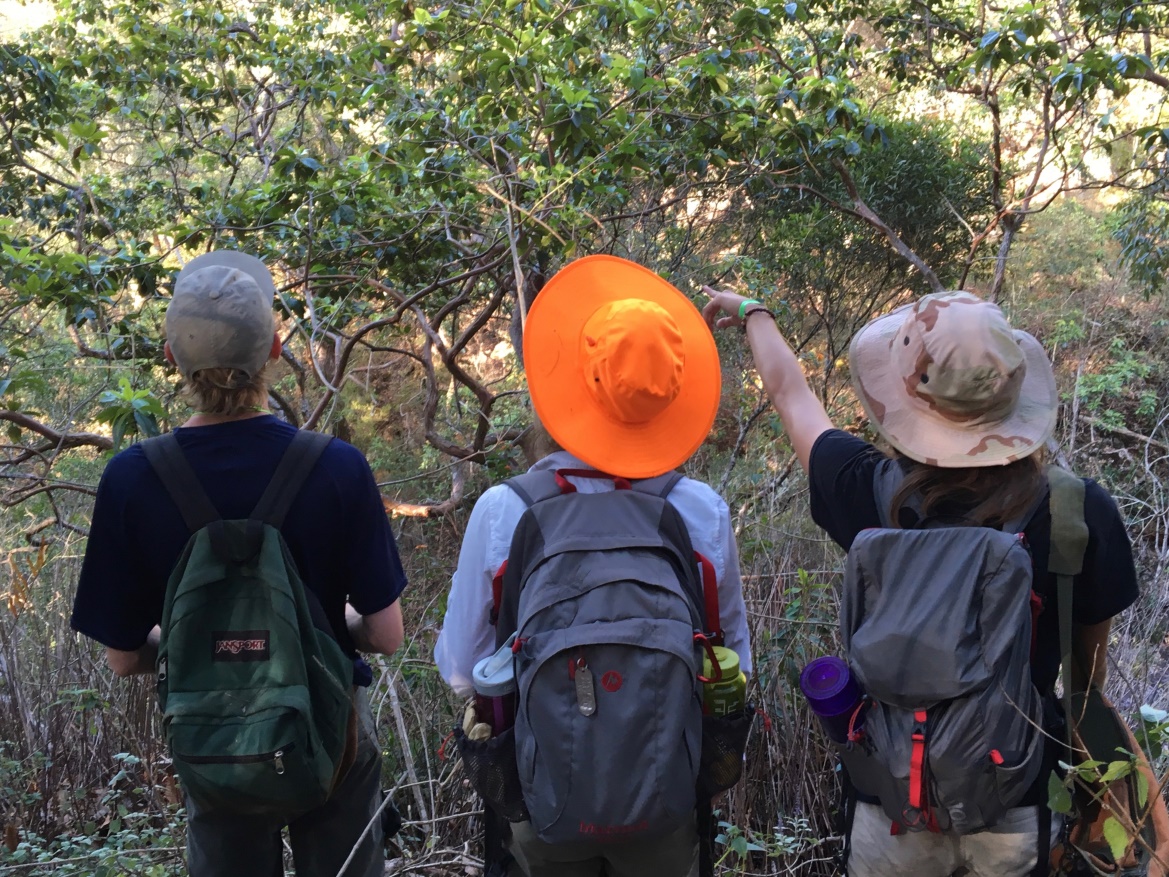 Ben, Sylvie, and Marley scope out the forest for potential glider den and feeding trees

I took the recording device into the field on the 11th of October, placed the microphone in a plastic frame and attached it to a branch of a small tree near a tree that showed signs of gliders feeding from its sap. I connected the device to a battery and started the program following the prompts. After setting the time to 120 minutes I then sat quietly at the tree together with two other students.

The observation session started at 18.30. Slowly birds became less active and quietened completely. At around 18.43 cicadas started to call. It was so loud that it was almost deafening. They all stopped at once at around 18.57. Soon after, the last cockatoos stopped calling and a beautiful quietness spread through the dark forest. We listened intently. Then, suddenly, we heard a typical glider call from the East and another one from the West. A few minutes later wee saw the silhouette of a glider against the sky and the glider landed at the tree. The animal moved down to a cut in the bark of the tree from which sap exuded and started to feed. My students and I noted the calls and the arrival of the glider.

After 30 minutes a loud call appeared near the tree and another glider arrived at the tree while calling. This animal went to a different cut and started to feed. After a while this glider moved further down to the first glider and rubbed its body against the first animal. From observations of Rupert Russell, who had observed many gliders in his life, we know that this behavior is linked with the distribution of a family odour among the members of a glider family. After this interaction the second animal moved up along the tree trunk and resumed its feeding. Both animals were feeding happily for quite a while before the second animal emitted a loud call and went further up the trunk to reach a branch from which it glided away into the forest. The observers got really excited because they now had two calls from the same individual which can be analysed for individual-specific traits.

After the two hours the recording device indicated that the data had been saved. On the next day the data were transferred onto the computer and into the sound analysis program. It was a great moment to see the sounds displayed graphically. The long period of cicada calls was clearly visible as well as several calls from Yellow-bellied gliders. I took the device out for two more nights while sitting at two other trees which were used actively by gliders to feed from. With the obtained data Stan is now able to tune the microphones and pre-amplifiers to optimize the ‘quality’ of the recording to extract as much information as possible. 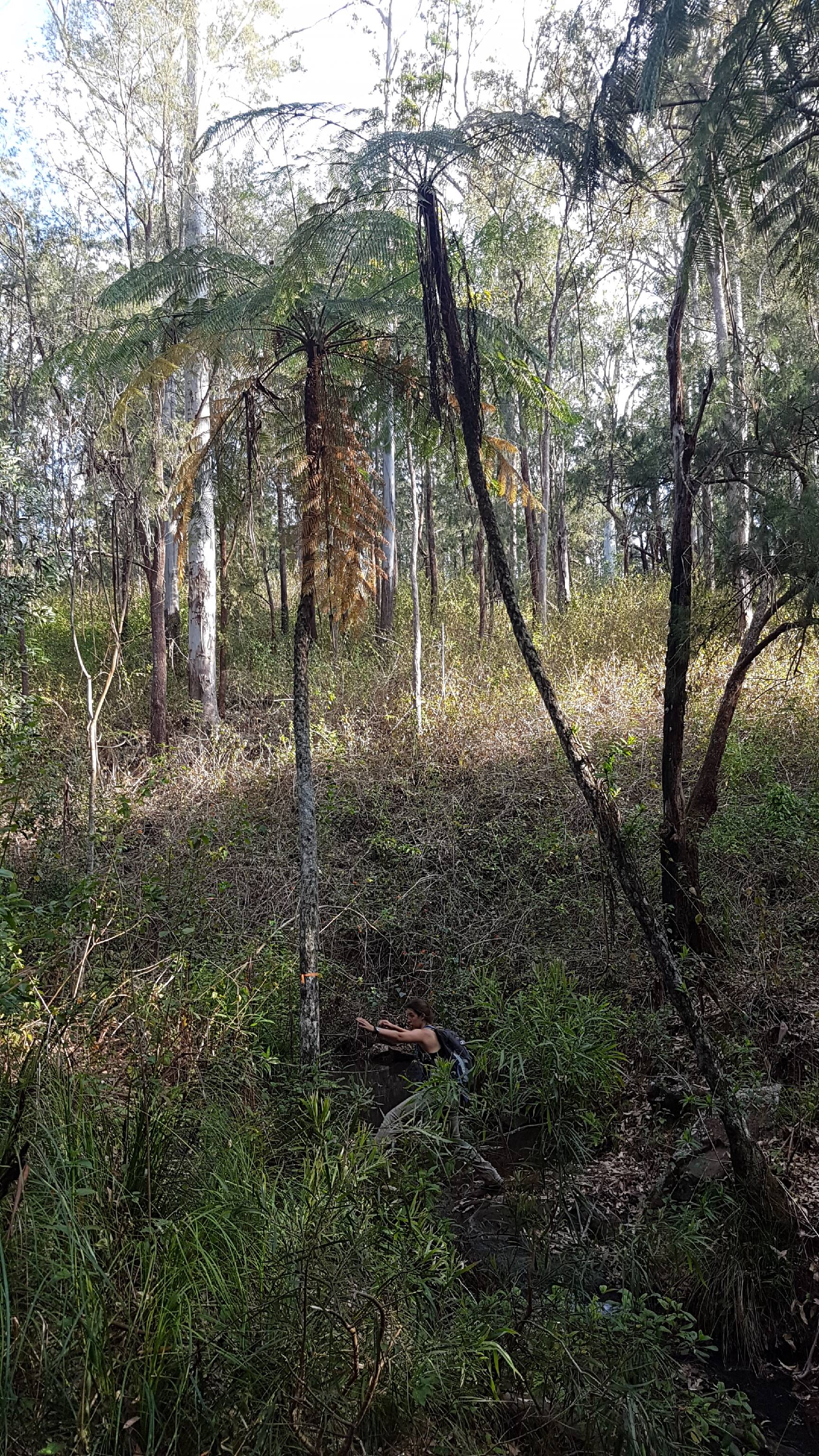 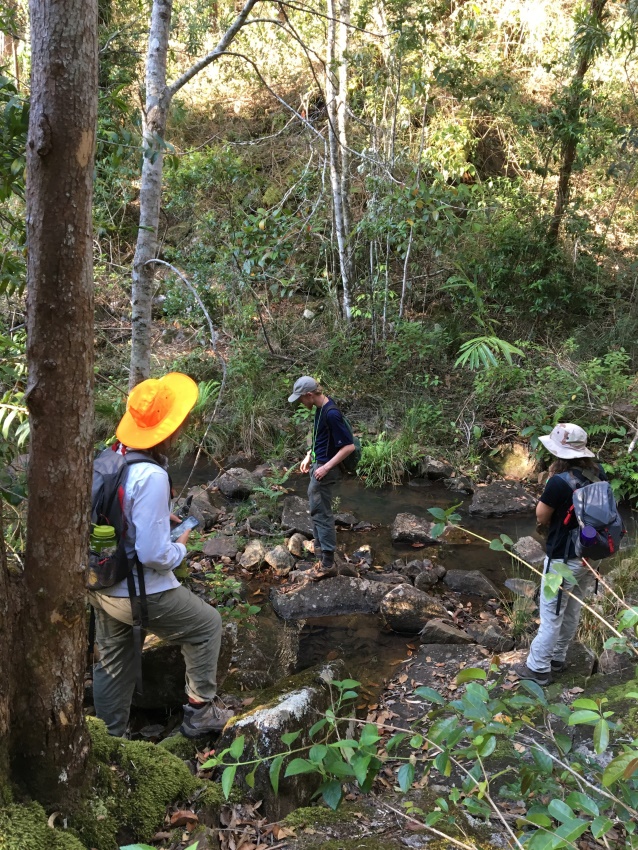 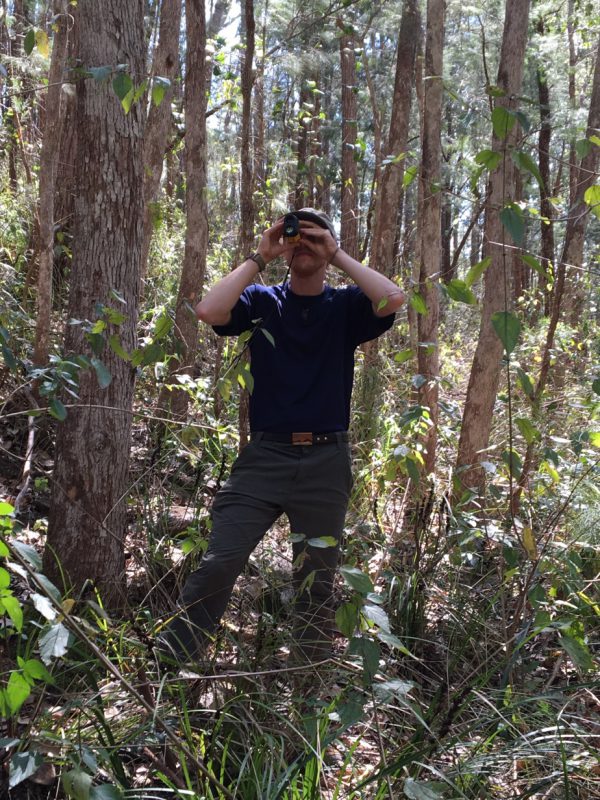 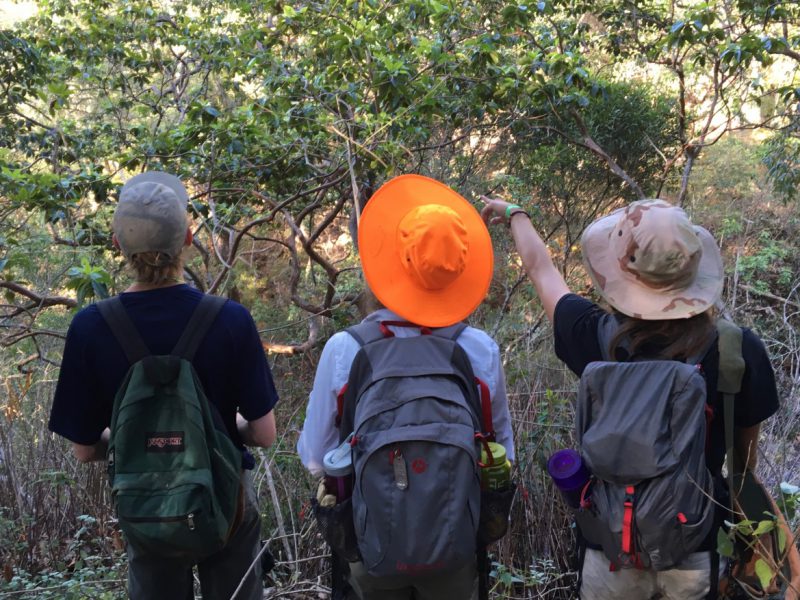 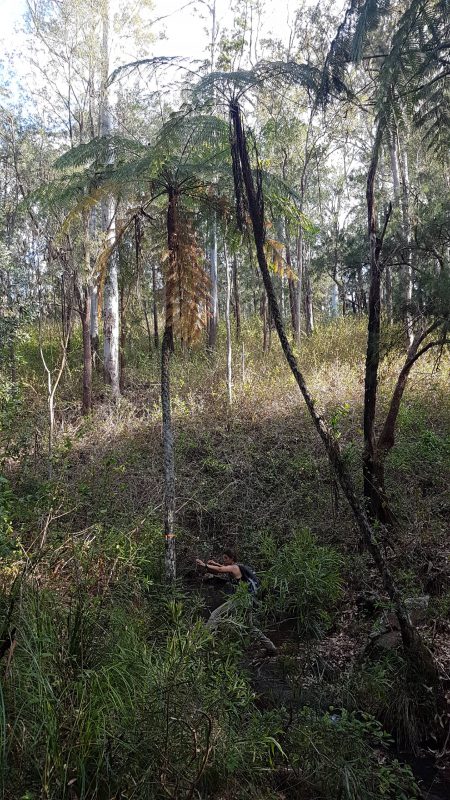