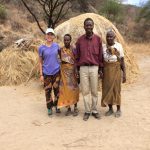 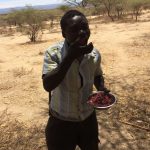 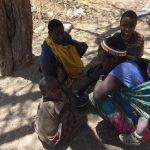 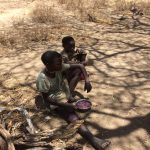 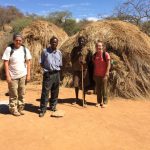 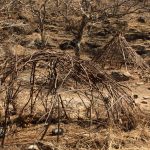 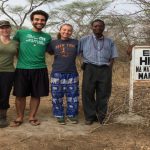 The Lifestyle Transformation of the Hadzabe

The Hadzabe are small group of hunter-gatherers who live in bands of 10-30 individuals in settlements in the Lake Eyasi basin in northern Tanzania. They represent the last remnant of the cultures that occupied East Africa before the arrival of pastoralists and Bantu agriculturalists over the past 5,000 years.

The Hadzabe speak a “click language” similar to the Khoisan languages of Southern Africa. In Tanzania, the only other group that speaks a “click language” is the Sandawe of the Kondoa district. The Hadzabe are believed to be the original people in the Lake Eyasi basin as they have been there for thousands of years and they are one of the oldest lineages of humankind on Earth.

As Hadzabe are hunter-gatherers, their mode of subsistence involves hunting animals and gathering edible plants. Their lifestyle is relatively nomadic due to their reliance upon the ability of the natural environment to provide sufficient resources in order to sustain their life. Hunting and collecting honey are men’s activities and animals are hunted with bows and arrows and spears. Women are responsible for gathering wild fruits, roots, tubers and sometimes vegetables. Everything that is hunted or harvested from the wild is shared by all people in a settlement. Usually the Hadzabe don’t cut trees to build their houses. Instead they use a few tree branches to build a frame and cover it with grasses. The resulting shelter looks like a bird’s nests at a distance. This type of natural resource exploitation is friendly to the habitat and environment and has sustained them for several thousand years.

In recent years, neighboring pastoralist and agriculturalist tribes including the Datoga, Iraqw, Nyiramba and Sukuma have encroached on the Hadzabes’ home range, thus causing natural resource degradation. These neighboring tribes have turned forests into farms, have cut down trees for building homes and livestock enclosures, and their livestock have exhausted water sources for wildlife. These activities have caused some wildlife species such as zebra, buffalo, hartebeest, eland, ostrich, lion and giraffe to flee from the area and have led to the decrease of wild fruits, vegetables, roots, tubers and even grasses for their shelters. This degradation of natural resources has limited the nomadic lifestyle of the Hadzabe.

In early November 2016, a group of students from SFS Center for Wildlife Management Studies (CWMS) – Tanzania, led by faculty member Mr. John Mwamhanga visited the Hadzabe of Yaeda Chini. The students conducted interviews with Hadzabe people and noted evidence of permanent structures in some settlements. For example, in some of the settlements the Hadzabe have stopped hunting and gathering from the wild and instead they are keeping chickens, farming corn, and have even built permanent burnt bricks houses instead of simple grass shelters. Evidently, these are coping strategies to the decrease of natural resources in their habitat and the visiting SFS team concluded that “obviously the Hadzabes’ journey of lifestyle change is in progress”. 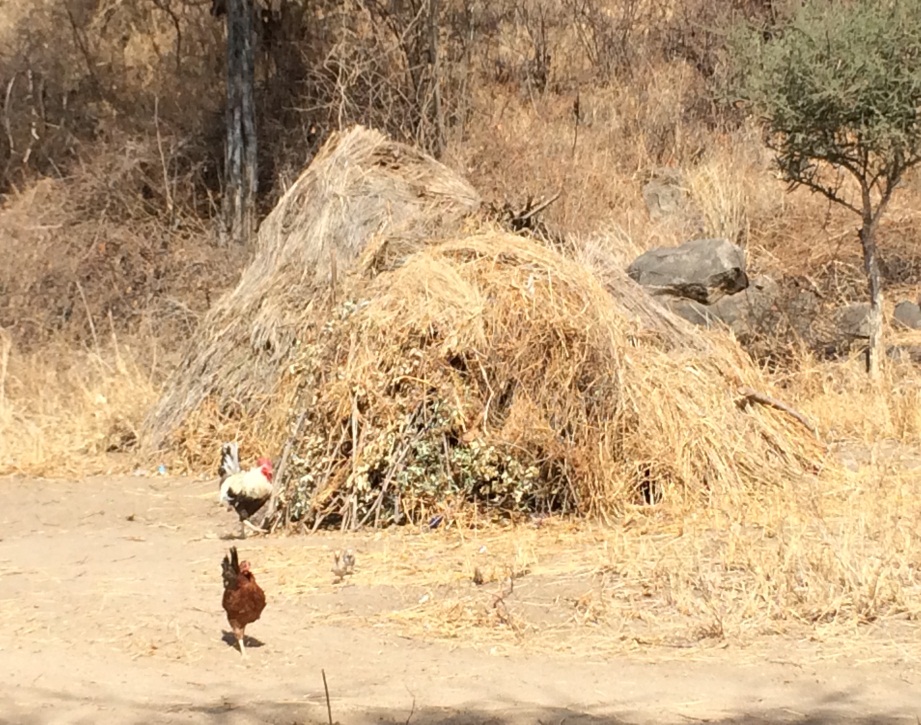 Chickens in front of a traditional Hadzabe home 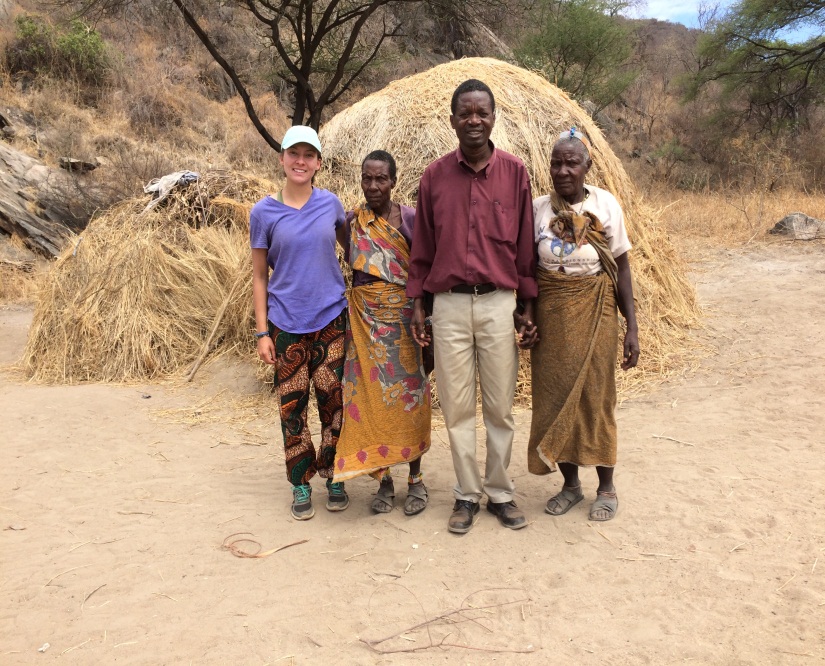 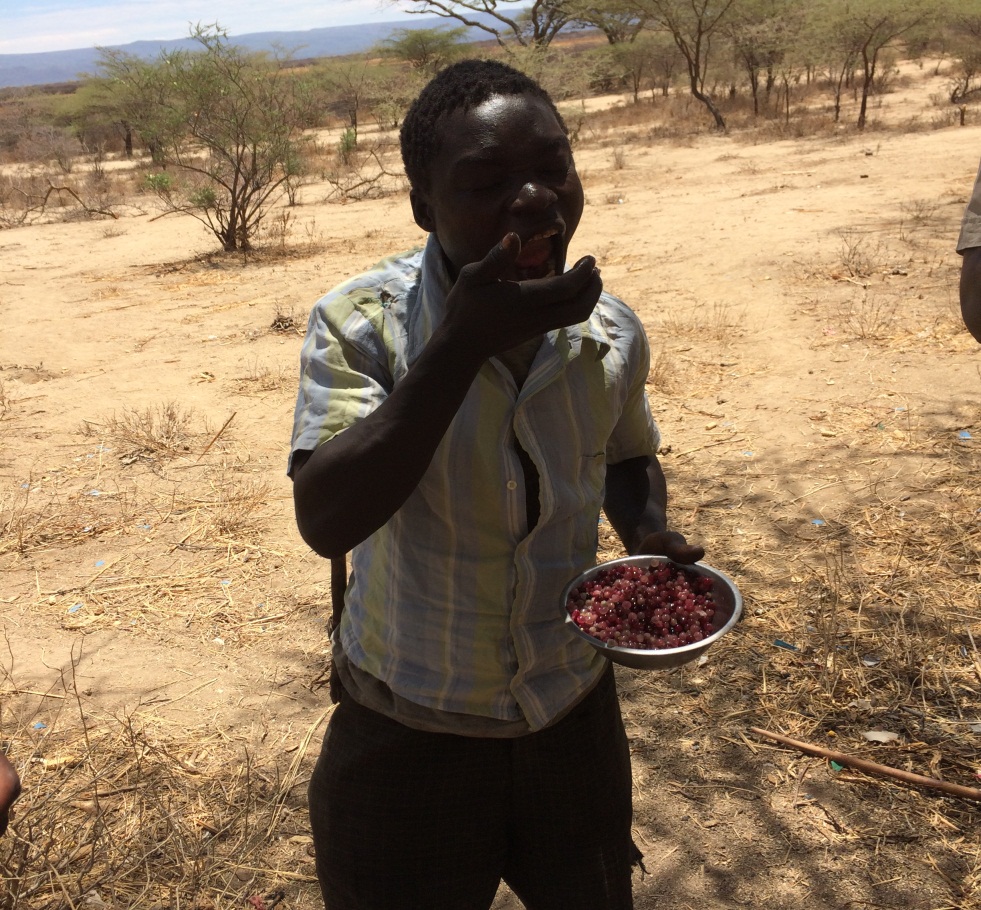 A Hadzabe man holding a bowl of fruit from Tafabe shrubs (in Hadzabe: Savadora bersica). These fruits are collected by women and are the main Hadzabe diet during this time (dry season) of the year especially when men are unsuccessful at hunting wildlife 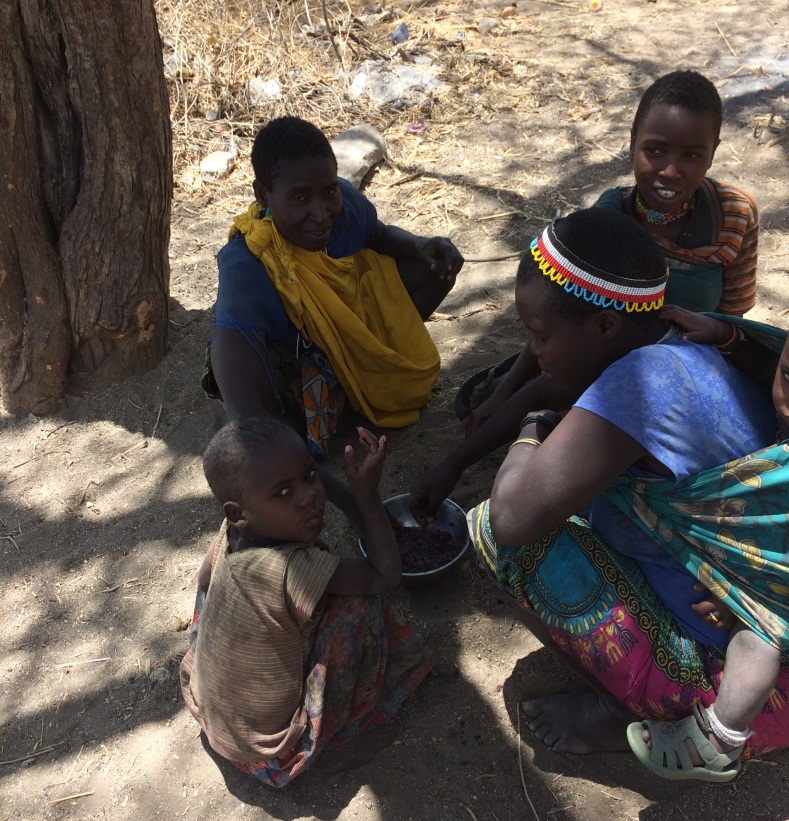 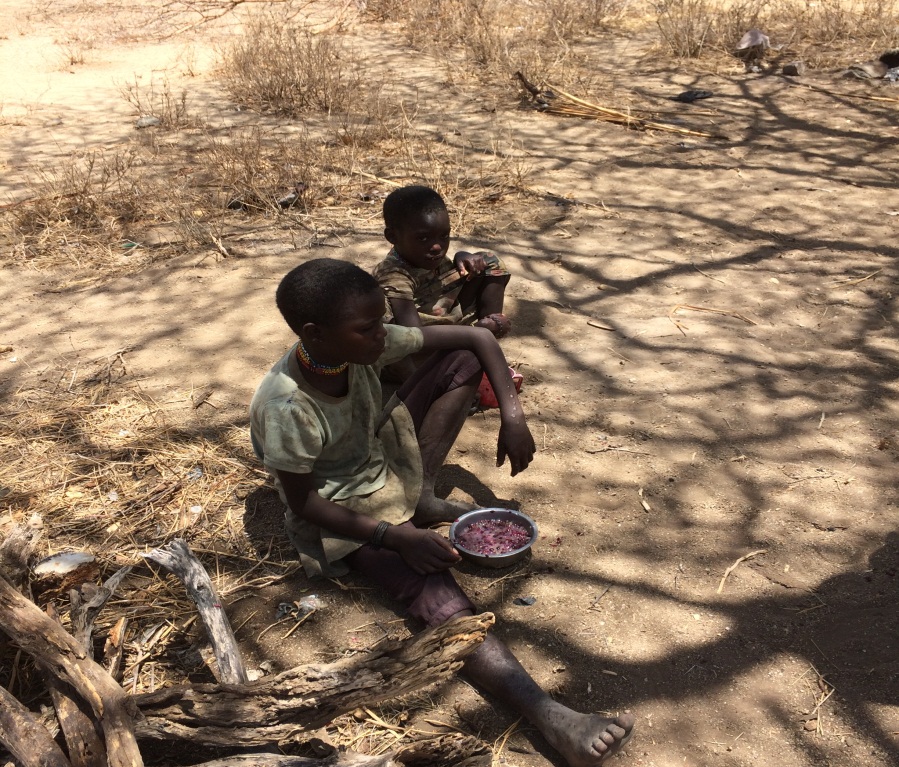 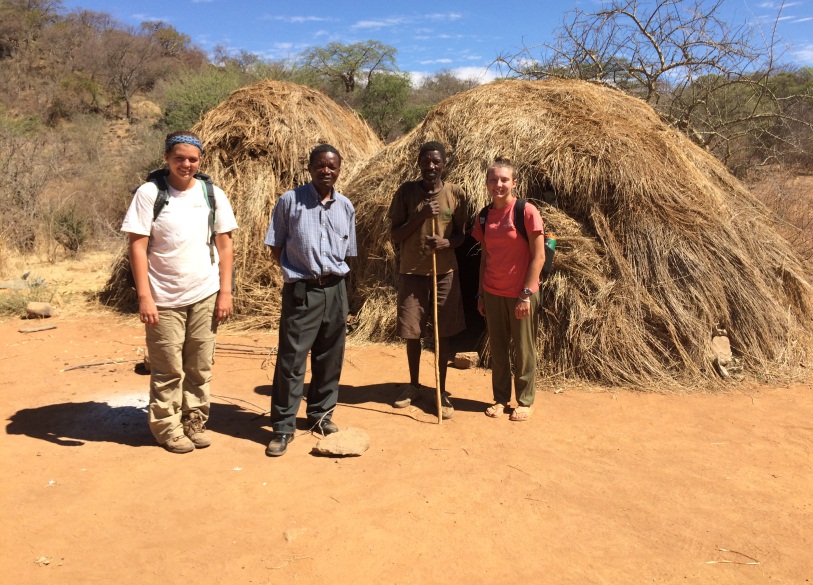 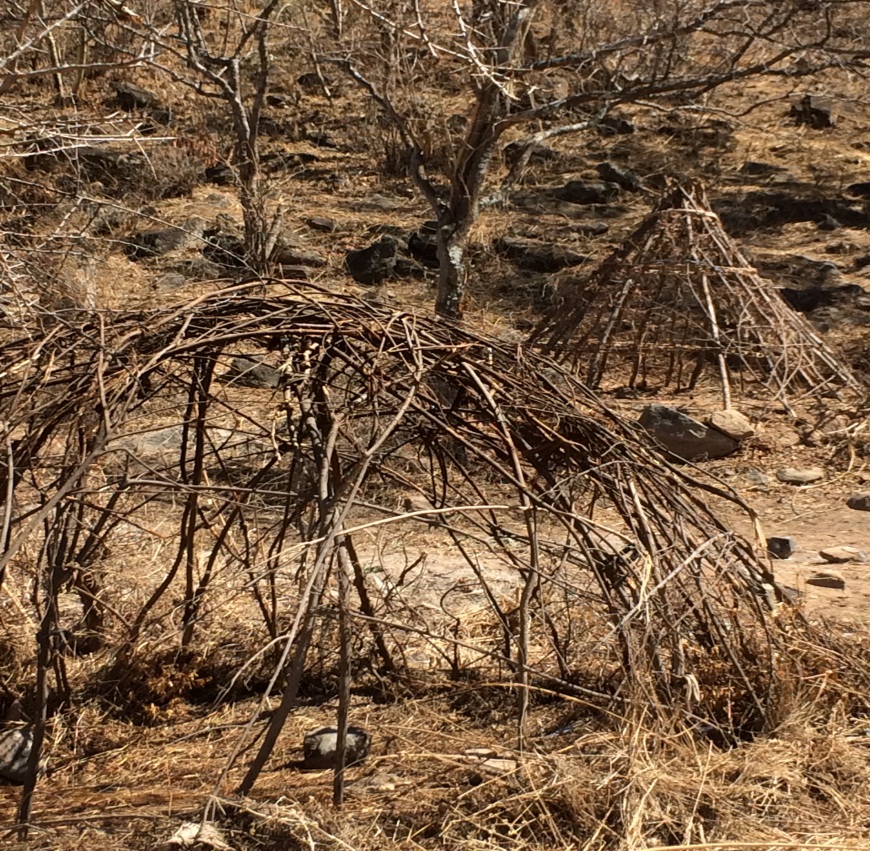 Tree branches are used to make frames of the Hadzabe shelters 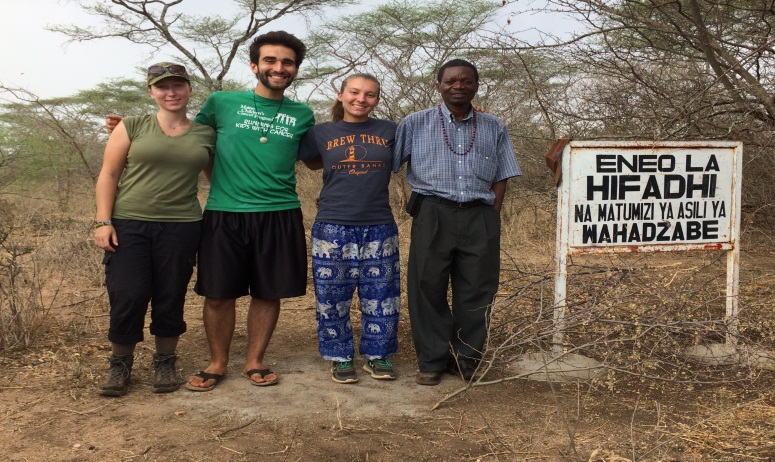 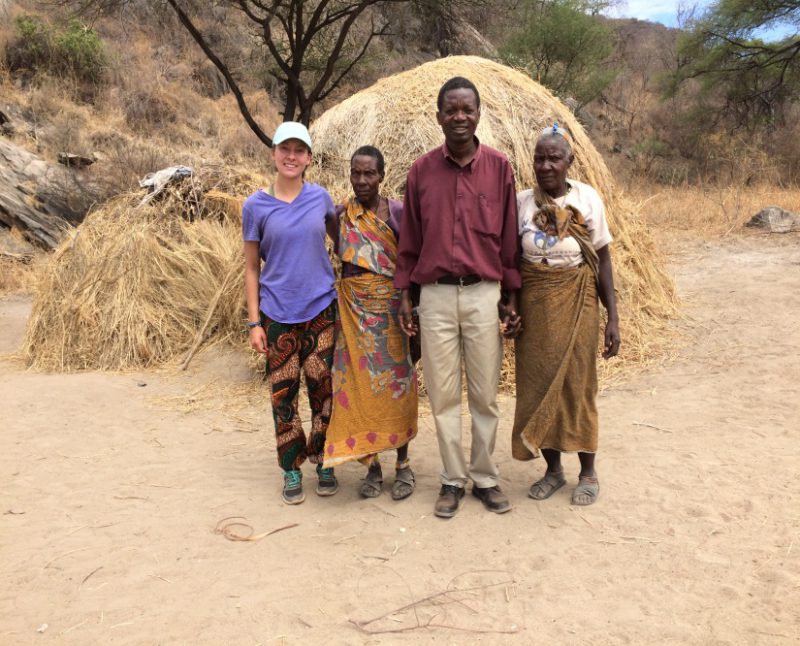 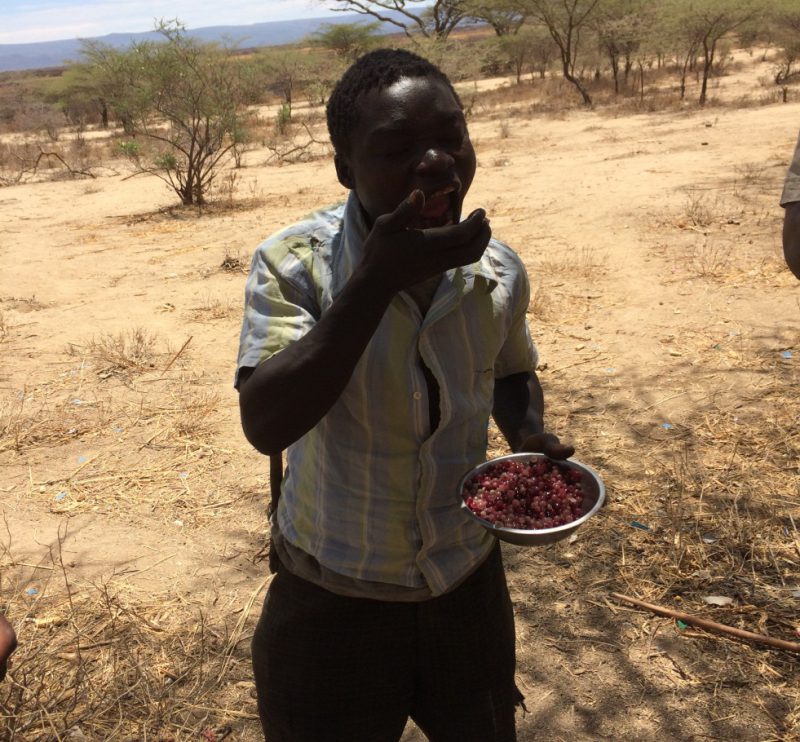 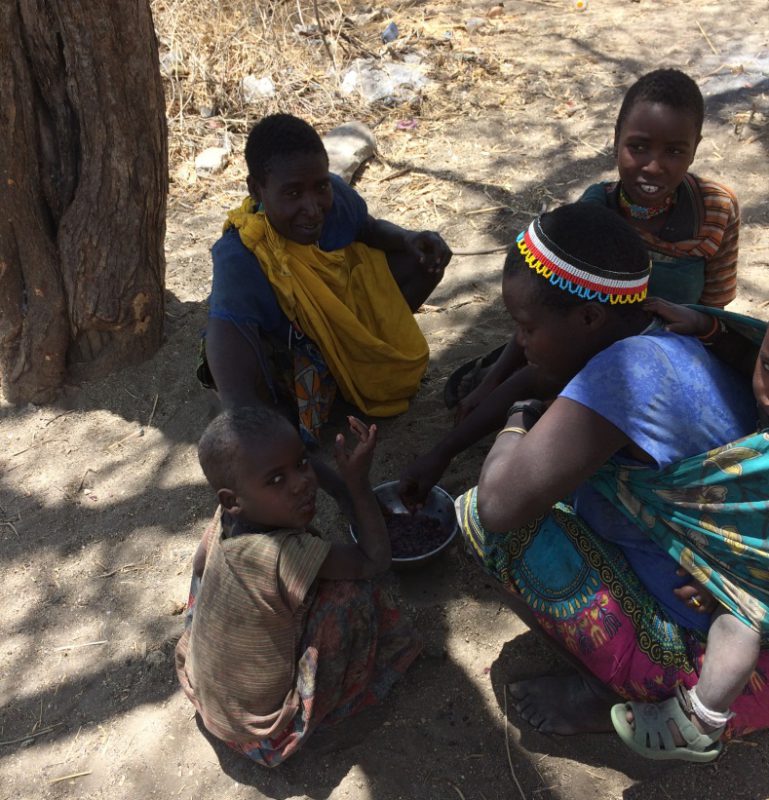 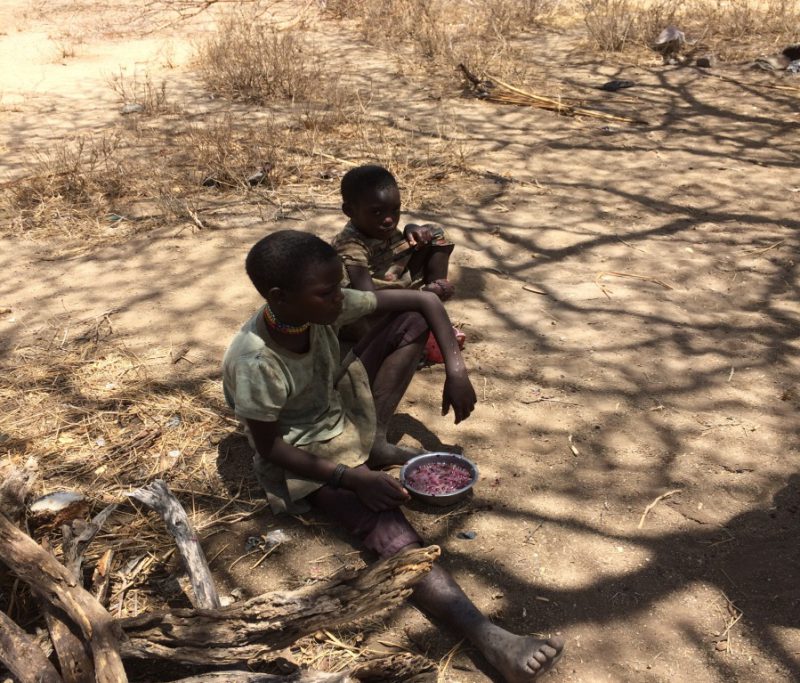 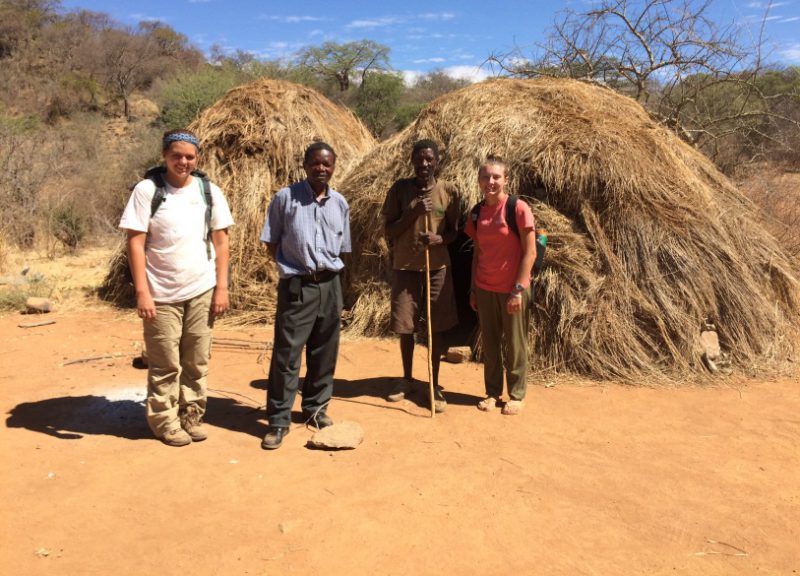 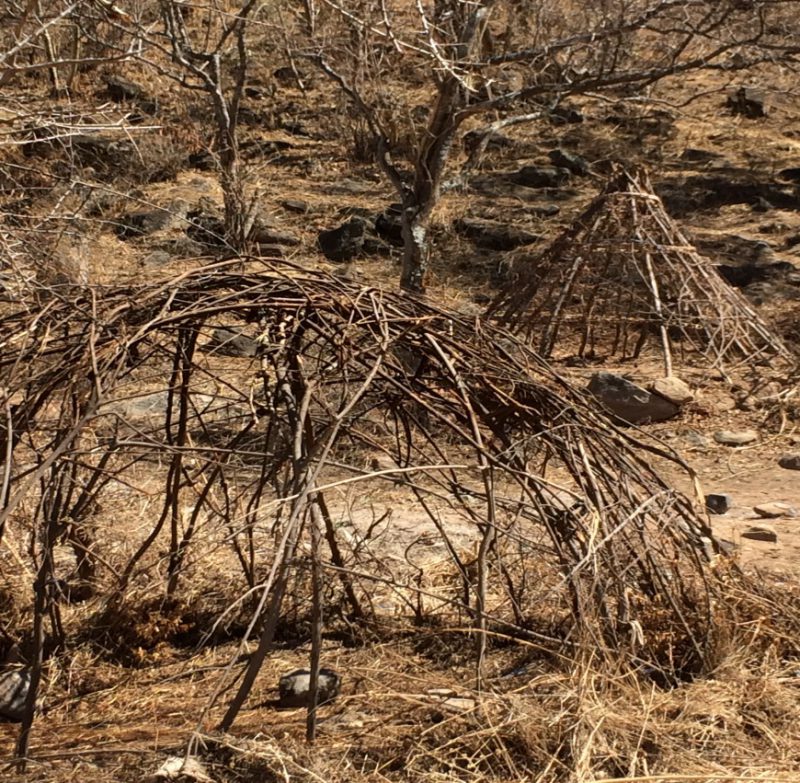