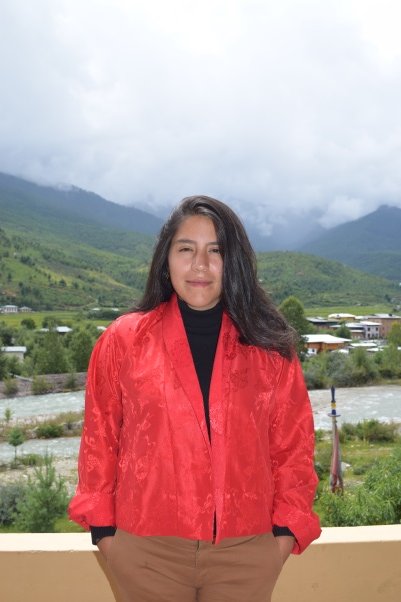 As the Fall 2017 SFS students begin to settle into their new homes around the world, we asked them to share their impressions of the experience so far. Lucía Calleja had this to say about SFS Bhutan:

Why did you choose to study abroad with SFS?
As a religion major who is very interested in environmental issues, Bhutan seemed like the perfect place to explore the interaction between these two topics; this country is renowned for developing an alternative ideology to development (Gross National Happiness) in which Buddhist ethics play a significant role in the creation of environmental policies.

What are your first impressions of the country?
Flying into the Himalayas is an extraordinary experience. With the distinctive Bhutanese style: colorful gowns, high-cheek bones and poised faces, the flight attendants already forecast the unique beauty of Bhutan. Twenty minutes before landing, an excited tourist points out the Everest through the tiny window. Following his finger, we see a massive mountain sticking through the cloud cover. A solemn, awe-stricken silence befalls our row (afterwards we learnt that that was not actually the Everest, but the effect of this God-like mountain was felt regardless). We begin the descent; below it looks like a crumpled-up piece of paper, deep green mountains in every direction. The airport is occupying the only stretch of flatland in sight. Considering the ruggedness of the terrain, it is no surprise that Bhutanese pilots are some of the most skilled in the world. Ours gently lands the plane on a too short runway. Exiting the plane I see one of the most majestic sights I have ever seen, we truly are in the roof of the world. Face to face with the mountains I had seen from above, I feel tiny. We enter an unlikely building for an airport, wooden, colorful, proudly displaying the traditional architectonic features that the Bhutanese try so hard to protect. We have entered the country of the thunder dragon, of the protected forests, of the happy people.

Whereas it’s a fact that Bhutan’s rate of protected forests (50%) is one of the highest in the world, whether its people are indeed the happiest is quite open for debate. Undergoing rapid modernization, Bhutan has faced dizzying changes in education, culture, and religion, every bulwark of their claim of uniqueness and happiness.

In terms of education, I was surprised to learn that everyone -and I do mean everyone- speaks fluent English. This is because in the 60’s the visionary 3rd King installed a modern system of mass education in which English was the language of instruction. The Bhutanese have taken so well to this new development that Dzongkha, the national language, has taken a second place to English in terms of cultural innovation, administration, and business developments.

Accompanying this linguistic change has come a cultural change that the government has tried hard to keep at bay: the Bhutanese youth are embracing western modernity with an unparalleled gusto. Surrounded by denim-wearing, Game of Thrones watching, Derrida-reading, dreadlocked youth, I feel like I haven’t left Portland. So many of Bhutan’s youth would be more at home in a hipster American bar than in this postmodern Shangrila.

In addition to cultural extinction, rapid modernization has led to some disintegration of the social fabric, which in turn has led to growing numbers of drug users. Drug addiction has become such a problem in Bhutan that throughout the country, community events are held in which the free-growing Marihuana plants are uprooted and destroyed by enthusiastic volunteers.

One thing that remains undeniable despite the modernization of Bhutan’s youth is the strength of this people’s religious devotion. This became evident to us during our first week in Bhutan when we visited the Buddha Dordenma Statue, a 160 feet tall Buddha statue overlooking a scenic valley. Under its shadow, hundreds of people gather to listen to his teachings. This gathering was part of a recurring event during which, for three months, devotees–mostly older and rural, sit down from 5 in the morning to 7 in the afternoon to listen to a renowned master recite Buddha’s teachings in an extinct language.

Similarly to their religious devotion, the Bhutanese devotion for their monarchs also took me off guard. Everywhere you go, the beautiful and benevolent faces of the King and Queen look down at you from the walls, from the only billboards in the streets, from photos glued to windows in buses, taxis, stores, and houses, from trinkets in tourist shops, from buttons pinned to people’s chests. I’ve seen their faces so much that my initial shock at the fervor of their subjects’ devotion has given way to a natural feeling of understanding, how could it be otherwise?

What are your first impressions of the field station?
Tiny, picturesque, surrounded by mountains and flanked by a river, our field station is an Instagram dream. We have very comfortable rooms, airy and sunlit, with extra fluffy bedding, and private bathrooms complete with water heaters and roomy bathtubs. Apparently, our chef used to work at one of the fanciest hotels in Thimpu, the capital, so we are served truly fantastic food everyday. To top it all off, there is a hyper-friendly cat that visits us from time to time, meowing loudly until someone sits down to pet him.

What do you think the biggest challenge will be for you this semester both academically and culturally?
Academically, I am nervous about not being able to adapt to SFS’s learning environment as I am not used to lecture-based classes, taking exams or being evaluated with letter grades.

As a non-American, I have two cultural challenges ahead of me: the first is living in extremely close quarters with people of a different culture than mine. The second, adjusting to Bhutanese culture, is of less concern to me as the only Bhutanese people who we interact with regularly are two of our professors and the staff at the Center. Indeed, the lecture given to us yesterday by the Police Chief reinforced the message underlying this program: “restrict yourselves from getting involved with local people” (literal quote). In that sense, the real challenge for me will be to be able to make friends with Bhutanese people.

What are you looking forward to the most about the semester?
Once the program is over, I’m excited to be able to look back at all I learned, both intellectually and interpersonally.

Give three words that best describe how you are feeling right now.
Excited, claustrophobic, challenged.