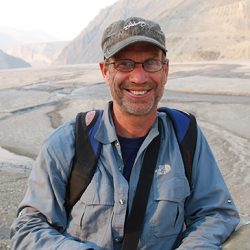 By: Robert E. Beazley, Ph.D. - Lecturer in Land Use, Natural Resources, and Conservation

From Paro to Bumthang: Cheese, Takin, and Bees

Bumthang is a name you here often at the Bhutan SFS Center in Paro. It is where the SFS Bhutan program first started and home to our partner institution the Ugyen Wangchuck Institute for Conservation and Environmental Research (UWICER), a governmental research and training institute. This fall, it was one of our first major field trips outside our home base in the Paro Valley. Approximately 200 miles/313 km west of Paro, it was a trip we all had been looking forward to after the many stories we had heard about it from staff and intern Patton Smalls who had been an SFS student while the Center was still in Bumthang. But 200 miles is a deceiving number – that is as the crow flies! It would be much longer if the mountains were flattened to equal elevation as you can see from the elevation graph. 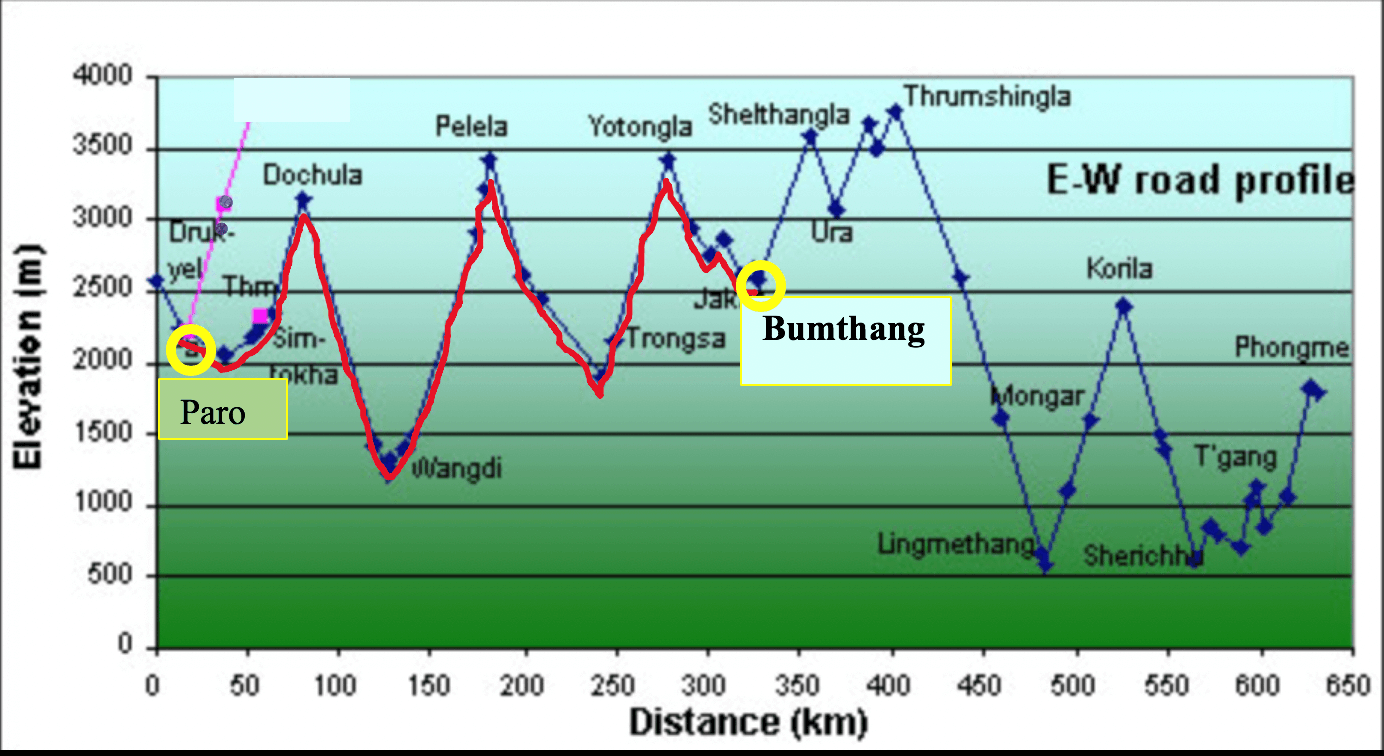 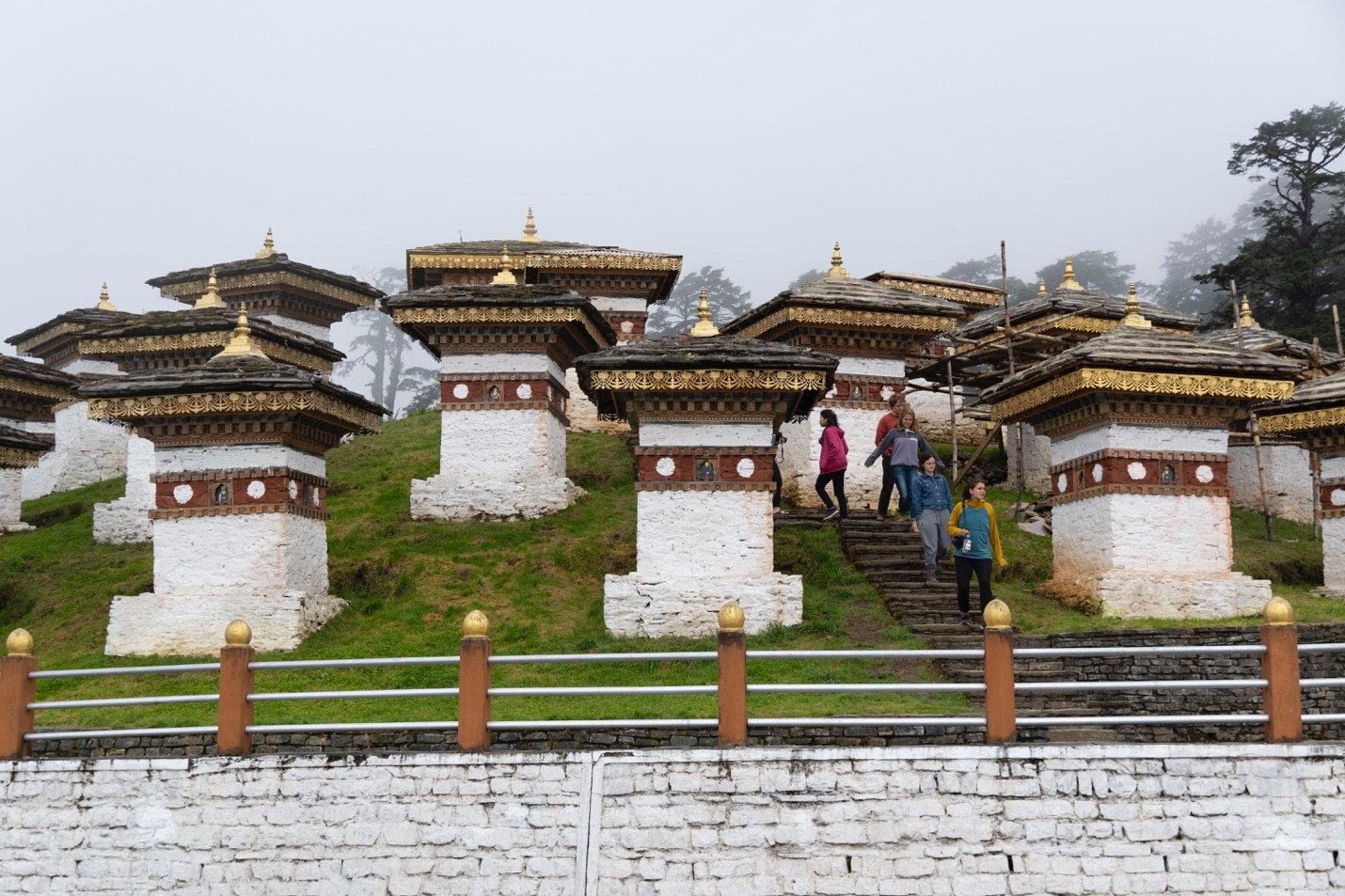 At the top of Dochula Pass, we stopped to take in the amazing view of the valleys below as well as the 108 Buddhist chortens in honor of the Bhutanese soldiers who gave their lives defending Bhutan in 2003-2004 against the Assam separatists who were illegally occupying a part of southern Bhutan.

On the way down from the pass we saw monkeys in the trees which, with the help of our resident mountain ecologist, Dr. Purna Chettri, we identified as golden langurs, an endangered species considered sacred by many Himalayan peoples. As we descended to Wangdi the temperature rose and by the time we reached our lunch stop in Bajo, many of us were tempted to take a dip in the Puna Tsang Chhu river running by. Following lunch, we drove up to the Pelela pass at 3,423m/11,230ft which marks the western border of Jigme Singye Wangchuck National Park and is the gateway to Bumthang and central Bhutan. On a clear day some of Bhutan’s highest peaks can be seen from Pelela including Mount Jhumolhari (7314m/23996ft), Mount Jichu Drake (6989m/22,930ft) and Mount Kang Bum (6526m/21,410ft).

We then descended to the Chendebji Primary School our campsite for the night. 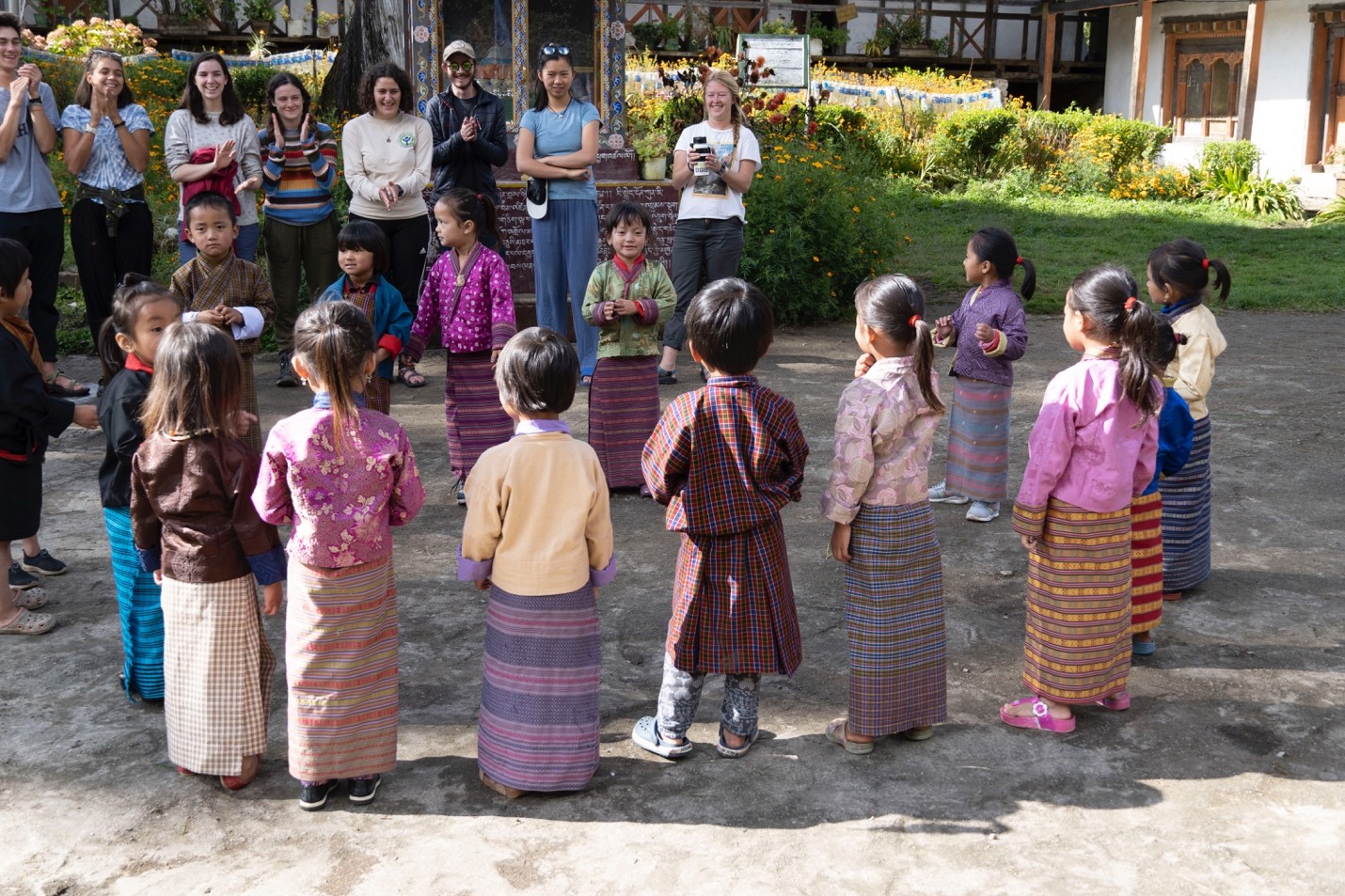 In the morning we were pleasantly surprised when students of the primary school started to arrive dressed in the traditional Bhutanese gho for boys and kira for girls. Morning assembly was held outside just above our campsite and the principle invited us to attend. The children did their morning recitations expertly which included several Bhutanese songs just for us.

Descending again to Trongsa we were greeted by one of the most impressive and the largest dzong (fortress) in Bhutan, the Trongsa Dzong. Overlooking the Mangde Chuu river the Trongsa Dzong has a commanding view of the surrounding valleys with obvious strategic advantages. Dzongs in Bhutan serve both religious and administrative functions. The Trongsa Dzong is home to 200 monks as well as the administrative headquarters of the Trongsa District government and is on the tentative list of Bhutan UNESCO World Heritage Sites. 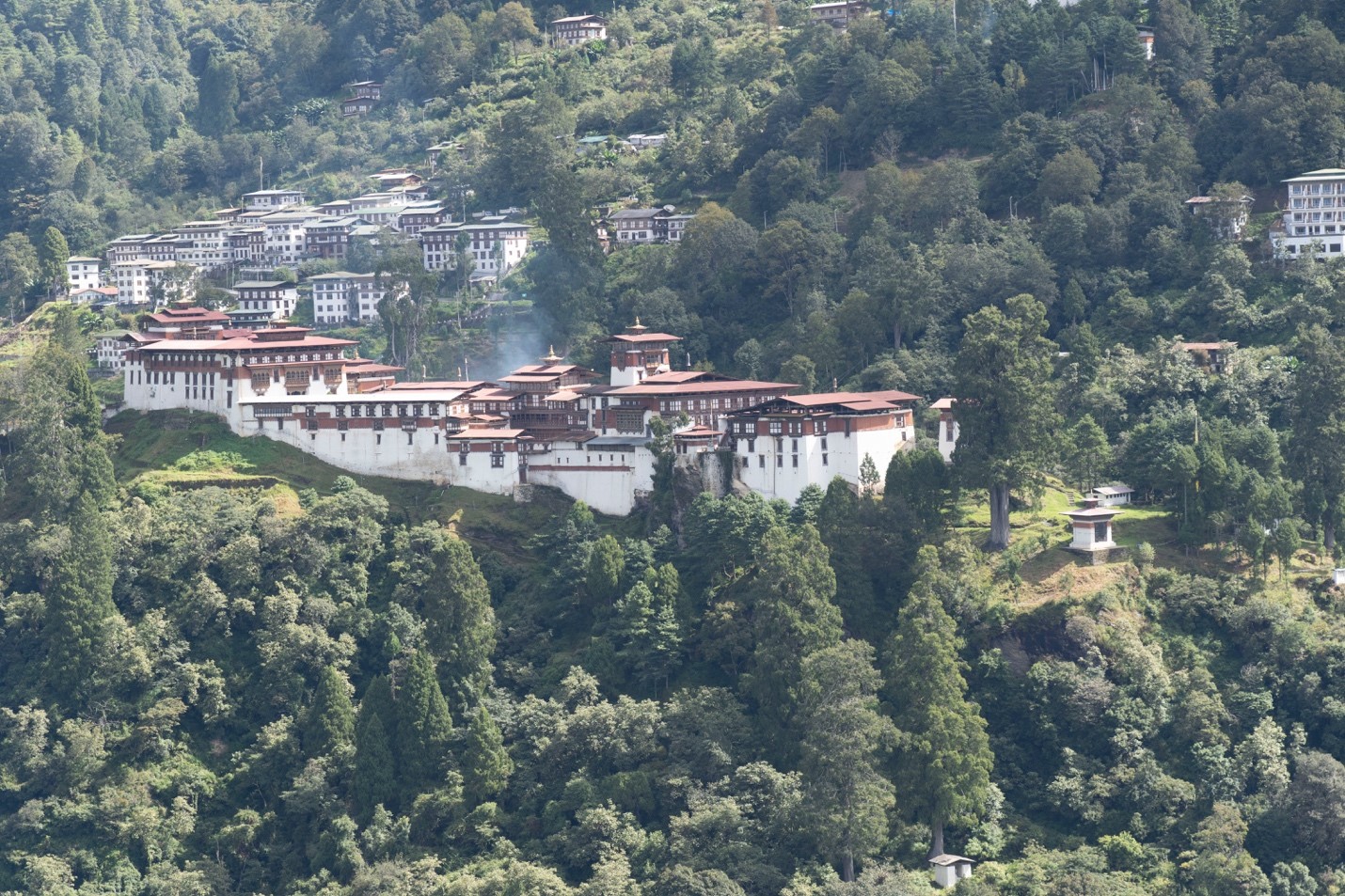 From Trongsa we again climbed the winding road to Yutongla pass (3,400m/11,155ft). Enveloped in clouds with no view, we pushed on in anticipation of the beautiful Bumthang valley that awaited us below. As we emerged from the clouds we were greeted with an expansive series of valleys. Bumthang District consists of four mountain valleys – Ura, Chumey, Tang and Choekhor (Bumthang). The word Bumthang translates as “beautiful field” which very accurately describes this part of central Bhutan. Upon reaching our temporary residence at the Ugyen Wangchuck Institute for Conservation and Environmental Research (UWICER) I could feel the students’ excitement at finally reaching this treasured valley. They were ready to head out on the trails and explore. 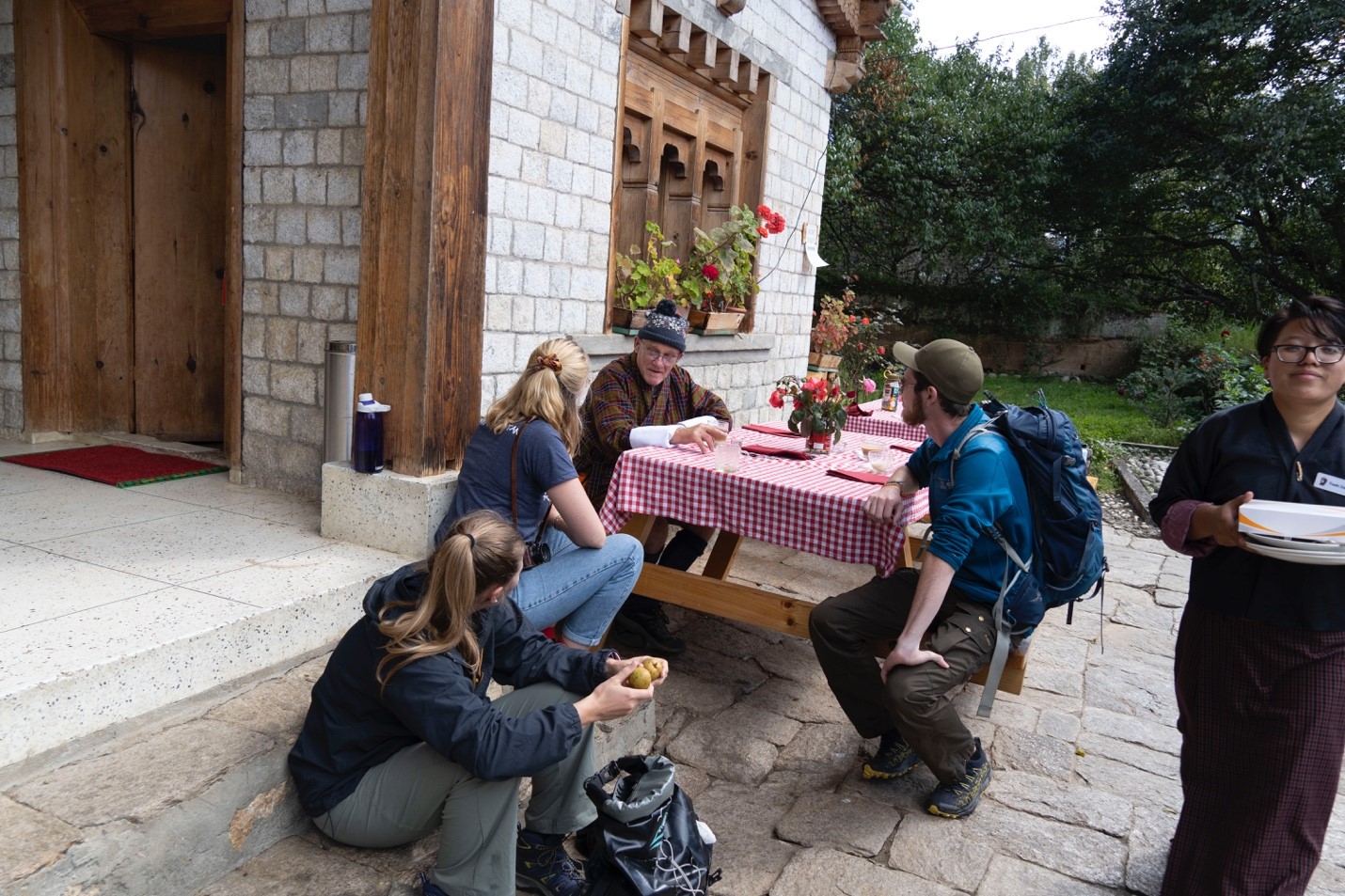 During our four day stay in Bumthang we did a lot of exploring. Lunch at the famous Swiss Guest House brought a welcome surprise when the owner, Fritz Maurer, gave us a talk on development in Bhutan and about his life in the “Land of the Thunder Dragon” for the last 51 years. “When I came to Bhutan in 1969, I was first looking for milk, that was my duty, and then for honey, that was my hobby.” Fritz was influential in Bhutanese agriculture in many ways over the years. Although Bhutan did have giant bees (Apis dorsata) a species common in parts of Asia, they are difficult to domesticate, preferring rock ledges for their hives, hence their name “rock bee”. Fritz decided to import another local bee which had become scarce in Bhutan, the honeybee known as Apis cerana. Over time other farmers in Bumthang became interested in beekeeping because, unlike other agricultural products, it requires very little land and a relatively small investment. Before heading to visit one of the beekeepers, we made a quick side trip to Fritz’s cheese factory to sample his different varieties which we had gotten a taste of during lunch. 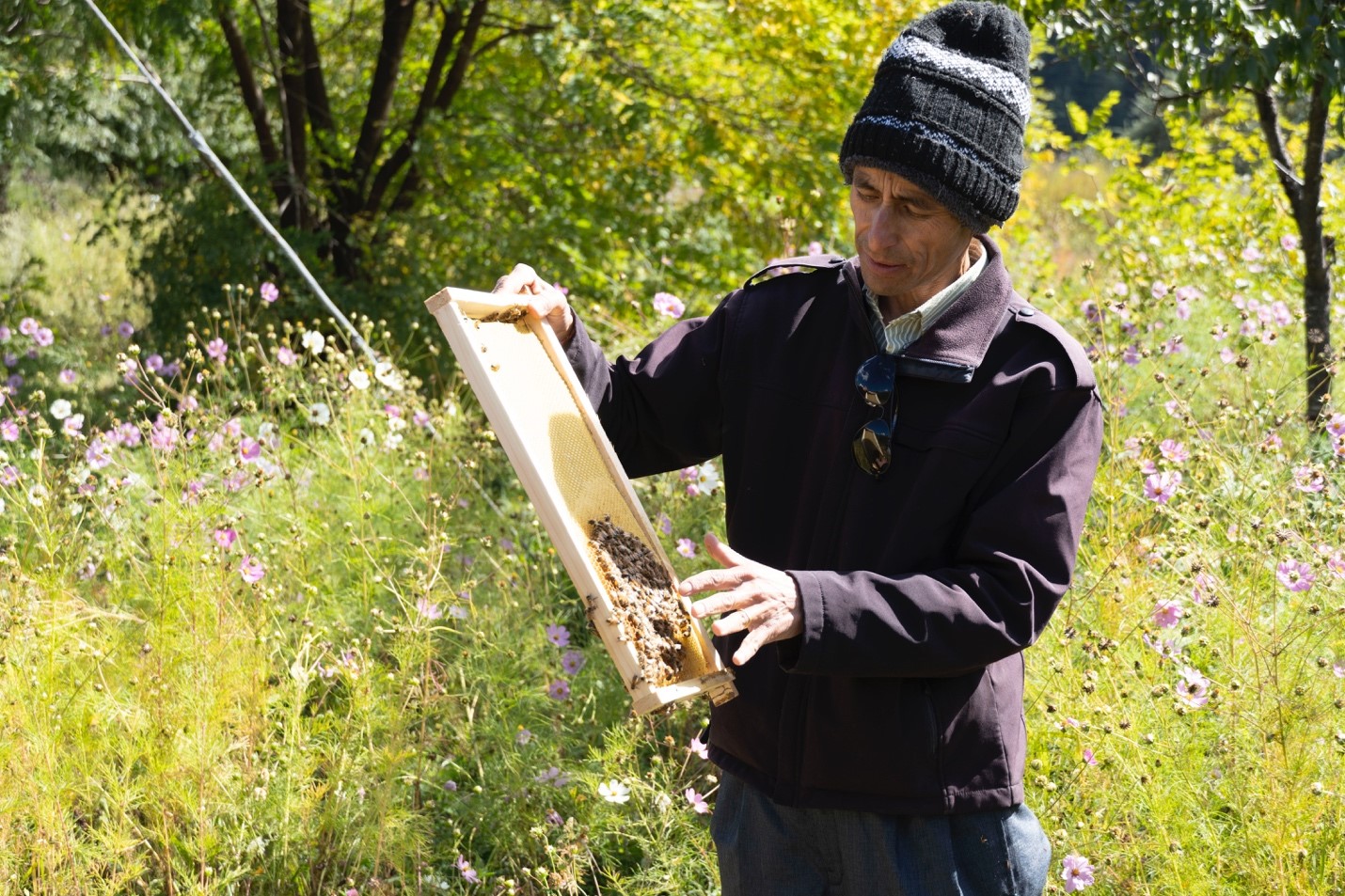 Beekeeper at the Bumthang Beekeepers’ Cooperative

The beehives were not far from the Swiss Guest House and upon arrival we were given a field talk about beekeeping by a member of the Bumthang Beekeepers’ Cooperative. We learned that another advantage of beekeeping is that you can harvest the honey three times a year and that the demand is so great they have trouble keeping up with it. In addition, the by-products such as royal jelly, pollen, wax, and propolis are also in demand. We followed him inside to the processing area where we sampled his honey and all eagerly bought jars. 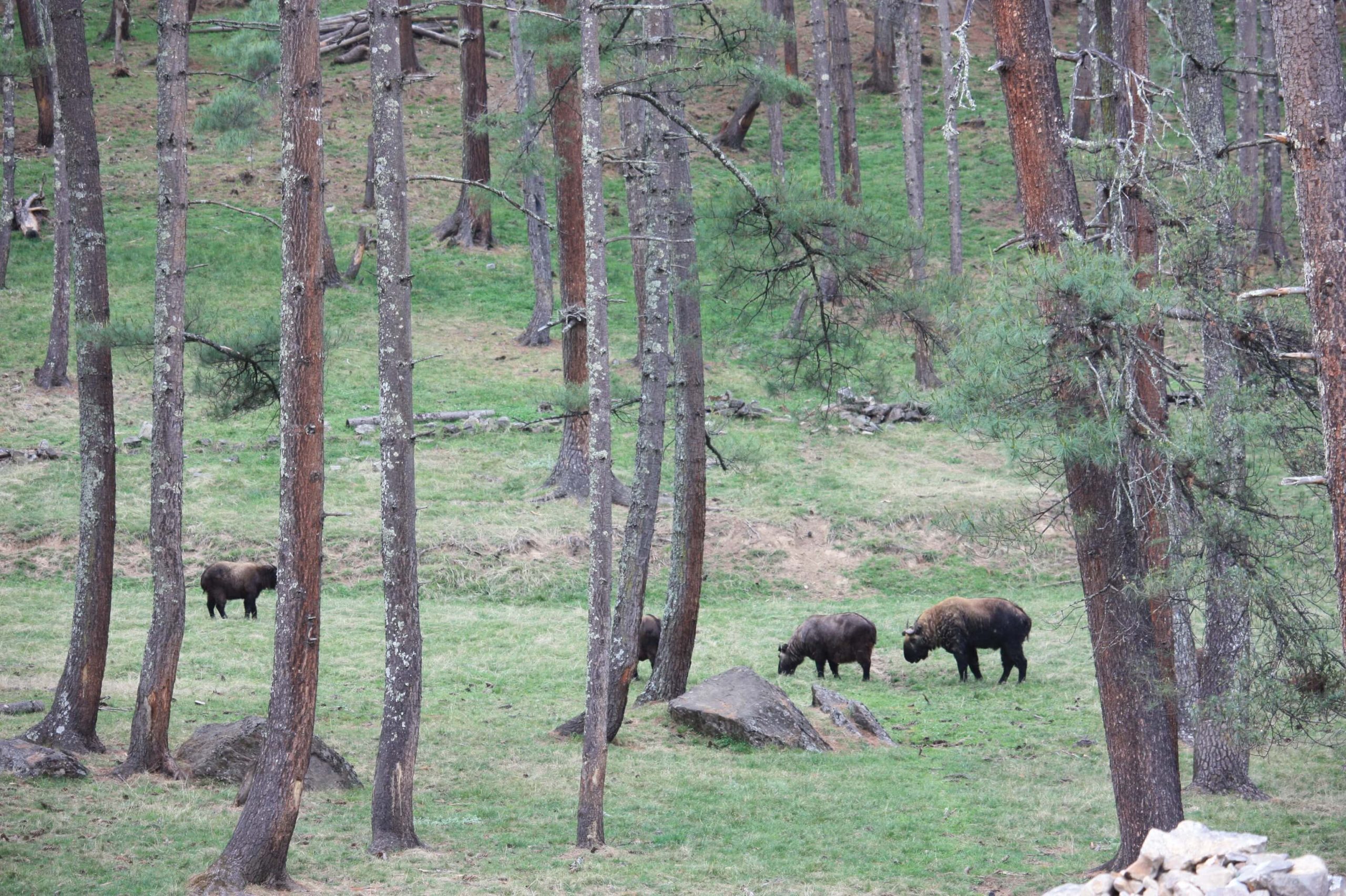 Back at UWICER we attended a lecture by Dr. Tiger Sangay, the leading expert on Bhutan’s national animal the Bhutan takin (Budorcas taxicolor whitei). Bhutan takin are endemic to Bhutan and are categorized as Vulnerable by the IUCN Red List of Threatened Species, with a population of about 500–700 animals in Bhutan. They are totally protected in Bhutan under Schedule I of the Forest and Nature Conservation Act of 1995. Takin are a very distinct looking animal with a thick and short muscular neck, small horns, and a large snout. They live at altitudes ranging from 1500–5550m, migrating seasonally to find suitable habitat and forage. The Bhutan takin is embedded in Bhutanese mythology. According to the myth, the famous Bhutanese Buddhist saint, Drukpa Kunley (1455–1529), was asked to perform a miracle by some villagers. He agreed on the condition that he be fed a whole cow and a whole goat. After consuming both animals, except for their bones, he took the head of the goat and putting it on the skeleton of the cow, he uttered some magic words. The animal jumped up and ran to the meadows to feed. 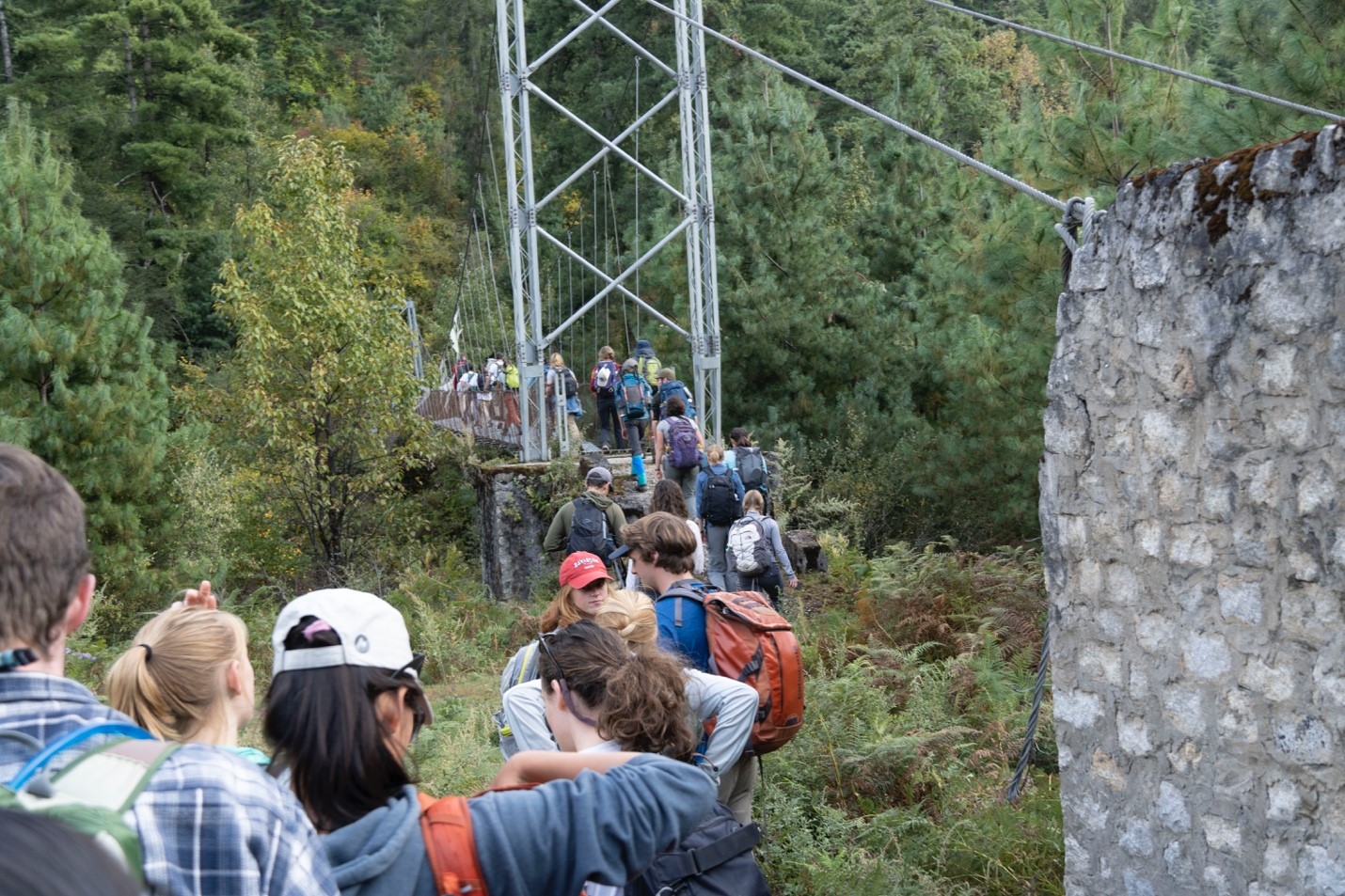 Hiking to the ruins of Daphram Dzong

No field trip is complete without some trekking to explore the mountain forests and rivers. With horses to carry our tents, food, and cooking supplies we headed out crossing the fast-flowing river along an easy trail that took us through forests and meadows, where our Bhutanese birding and wild edibles expert Rinchin, foraged for edible mushrooms. Arriving early at our campsite we had time to explore the ruins of Daphram Dzong, a short walk up the hill above us.

Daphram Dzong in one of Bhutan’s most important archaeological sites and was part of a three-year excavation in which Dr. Kuenga Wangmo (SFS’ lecturer in Political and Socioeconomic Dimensions of Environment) participated. Radiocarbon dating suggests it was built in the second half of the 16th century. It is thought to have been built by the ruler of the valley at that time, Chokhor Deba.

The next day students and staff continued trekking over a pass and down to a community campground at Kizom. 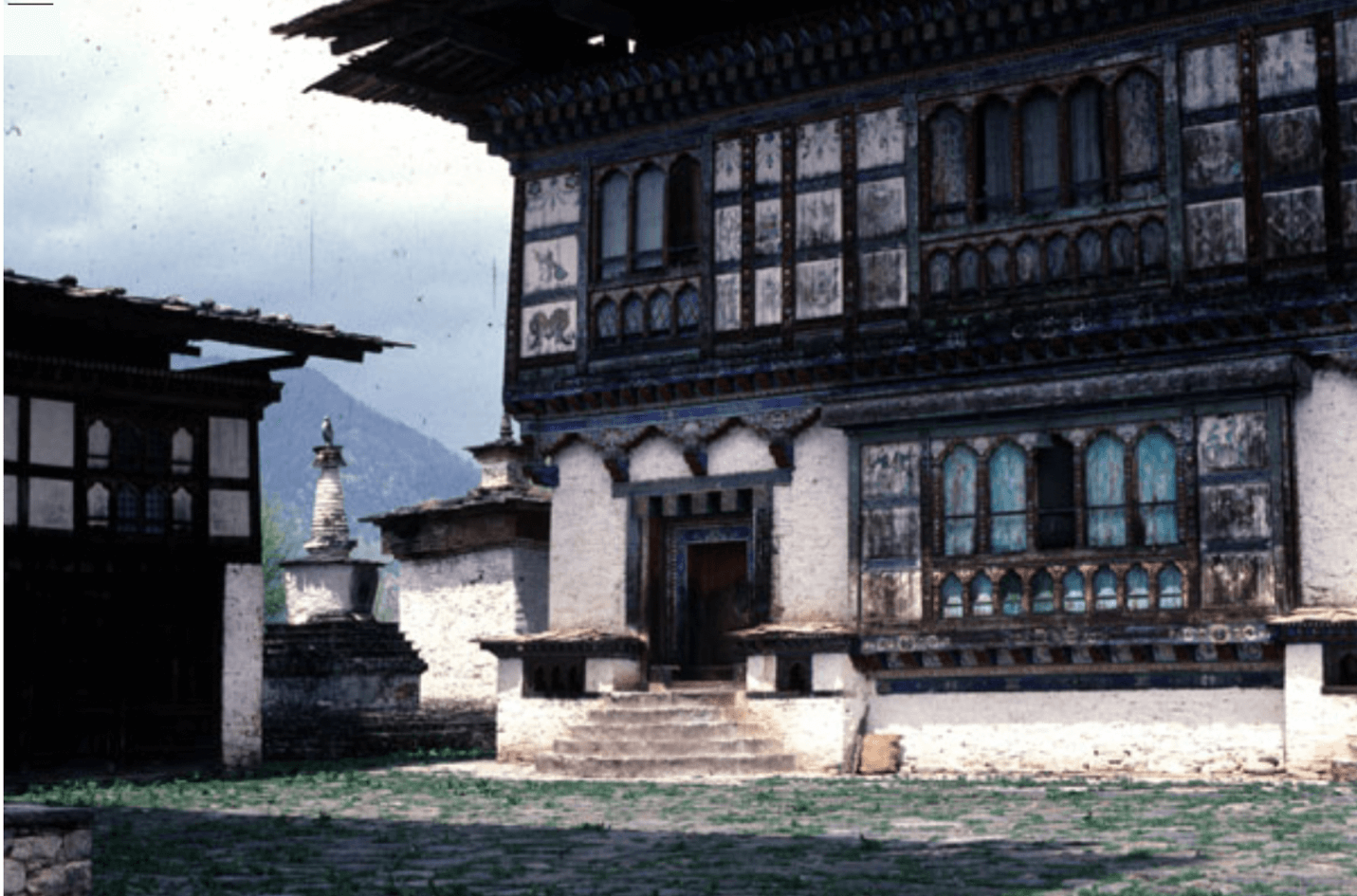 Our final visit was to the Ogyen Choling Palace and Museum. Ogyen Choling is steeped in Bhutanese history having been visited in the 14th century by several very celebrated Buddhist masters from the Nyingmapa School of Tibetan Buddhism. The museum is fascinating with well-preserved hand-made textiles, household implements, and even ancient swords, shields, and muskets.

On our way back to Paro we stopped again at the Chendebji Primary School where we had camped on the way from Paro to Wangdi our first night. It was a pleasure to see the school children again and watch them do their morning rituals. We were touched by their enthusiasm for their country and respect for its beauty and natural resources. It is something we had grown to appreciate also everywhere we had gone on our trip to Bumthang. it was a good reminder of how fortunate we were to be studying in the Kingdom of Bhutan.