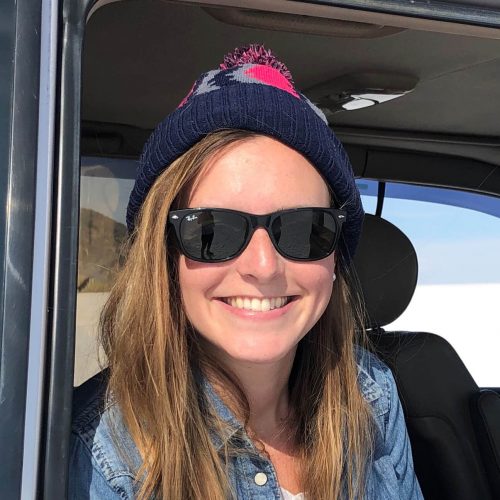 After a rigorous semester of learning as much as they can about science and how it can relate to the harsh Patagonian landscape, our students have seized the opportunity to study this region more in-depth. With the guidance and direction of our faculty, the students spent the last week in the field, collecting data and asking questions about all that they have learned. SFS Chile’s directed research was partially based out of Torres del Paine National Park, oft considered the eighth wonder of the world, and partially out of the beautiful Patagonia Bagual, an old sheep estancia that now serves as a tourism destination and research station. Both places are dotted with native forests and guanacos, framed under a backdrop of awe-inspiring mountains. However similar, they differ in their exposure to tourists, and they served very different roles for each research group and project. 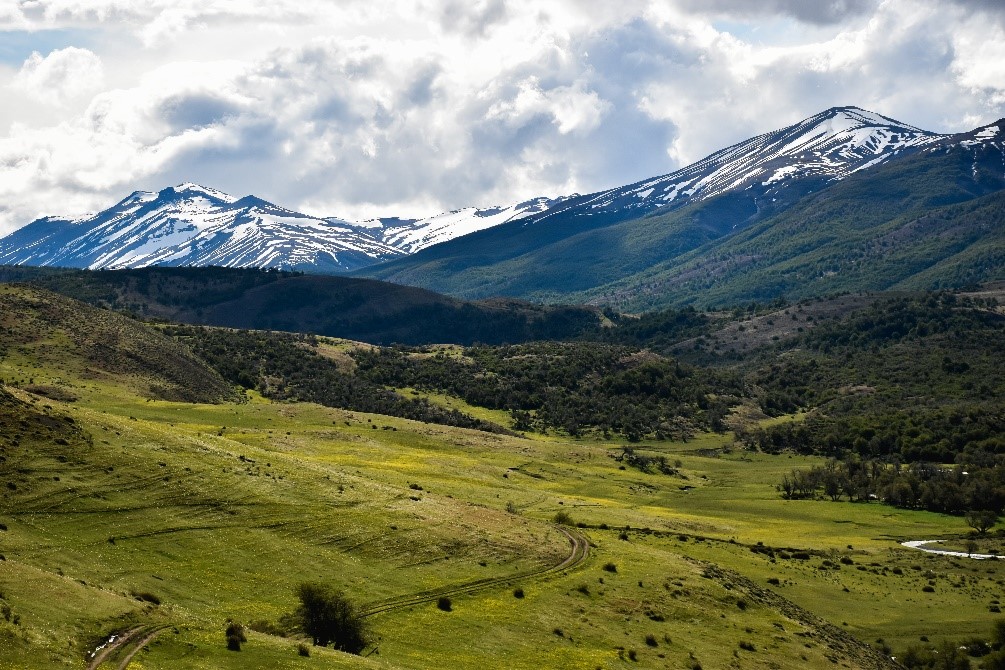 Patagonia Bagual, a hidden valley away from the bustle of the National Park. Photo courtesy of Jenny Thompson

Dr. Shaw Lacy (Lecturer for Patagonian Ecology) started two new projects at Patagonia Bagual; one studying macroinvertebrate biodiversity in streams, the other focusing on the growth of two Nothofagus species of trees. The macroinvertebrate study involved fishing waders, tall nets, and some sediment-disturbing-dances in the collection process, all at the banks of picturesque streams speckled with hundreds of dandelions under the some of the sunniest skies we’ve seen so far. After two long days at over 15 sites across two different tributaries of a stream, the students had collected hundreds of insects and other invertebrates from the rivers. Now, their data analysis involves mapping the distances between each site and how that correlates with the relationships between the populations found at each place, plus determining the impacts of ecosystem type on stream biodiversity. 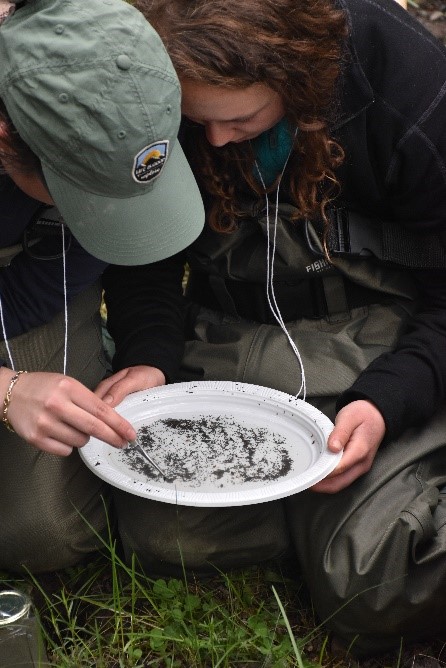 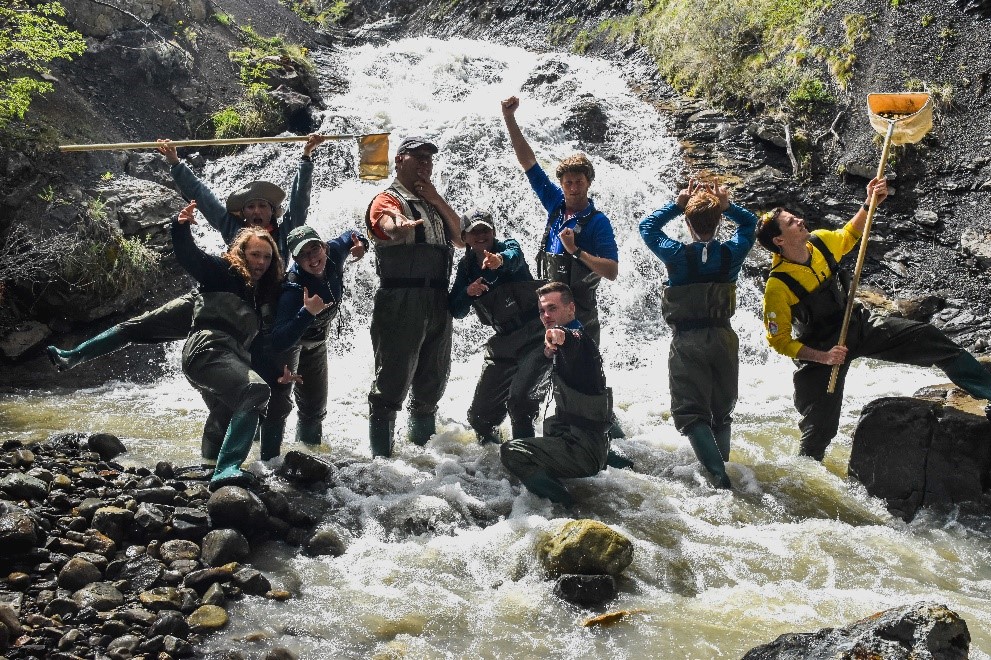 Team “Tree-bug”, under the mentorship of Dr. Shaw Lacy, sorts through their findings and celebrates reaching the waterfall, aka the end of the collection day! Photos courtesy of Jenny Thompson

Dr. Lacy’s other project had students deep (okay, not that deep) into the native forests of Patagonia, measuring an assortment of variables for Lenga and Ñirre trees, both species of the Nothofagus genus. Fun fact about this genus—it’s literally translated in Latin to “Not a fagus” which is the genus for the beech tree we are all familiar with in North America. Early explorers originally thought these Patagonian trees were beech trees and upon realizing they were mistaken, changed the name from “beech” to “not a beech.” The stands of these trees in Patagonia Bagual are some of the oldest we know of. They grow extremely slowly due to the harsh Patagonian climate, so the ravaging human caused forest fires in the past few decades have done quite a number on the native forests, and. As a result, our students were very interested in calculating the growth curves for the trees, based on measurements of girth, height, and age (based on tree cores collected by Dr. Zielinski’s group). This data will be useful in estimating how long these trees take to recover after a burn, hopefully enabling for more effective reforestation efforts in the National Park. 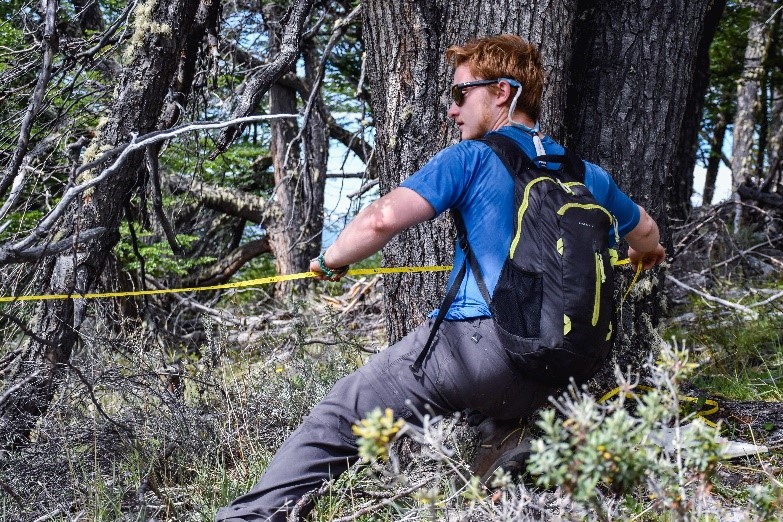 Dr. Greg Zielinski (Lecturer for Earth Systems & Climate Science) started a new dendrochronology project at Patagonia Bagual, where students used tree borers to extract 5mm wide cores from trees in the local native ecosystem. This allowed them to see the tree’s rings, indicating the age of the tree and so much more. Based on the widths of the rings, students can extrapolate the kind of weather the tree experienced during that season, and other metrics can allow us to use these cores as a proxy for climate records dating back nearly a hundred years. When compared with known climate data in the area, the process becomes more accurate and useful when investigating climate change, its impacts on the trees, and the characteristics of the trees themselves. The students put in hard work extracting numerous cores, even to the point of sore shoulders, and protected the delicate trays ever so carefully.

With some last minute changes, as traditionally occurs in fieldwork, Dr. Zielinski and students started another project concerning glacial till—rocks and sediments left behind by ancient glaciers—and using those sediments to reconstruct characteristics about the glacier that left them. This had two of our students climbing up huge piles of rocky depositions and collecting samples while taking observations about the types of material that had been deposited. This even included tasting the rocks in order to get a feel of the texture! 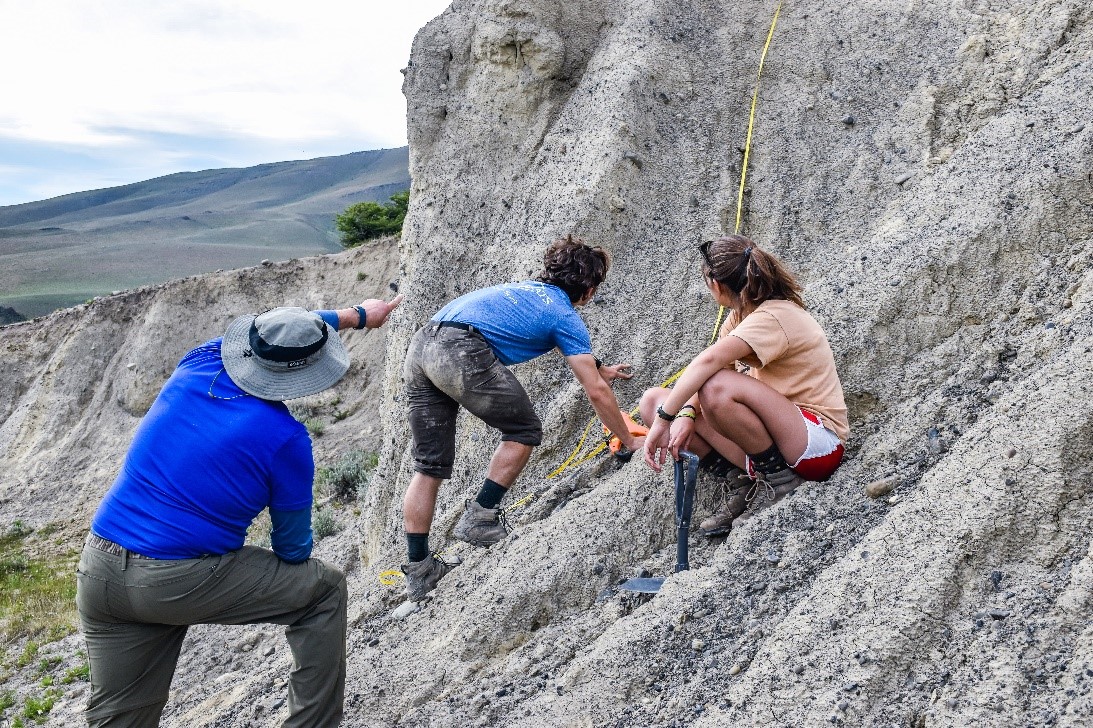 Dr. Greg Zielinski works with Guiseppe Inglima and Phoebe Murray to interpret the gradients present in the glacial till. Photo courtesy of Jenny Thompson

The last project Dr. Zielinski is overseeing was not in Patagonia Bagual, but rather in Torres del Paine, looking at the vulnerability of different trails to geological degradation processes such as erosion. Fittingly, when this student arrived at the park with the other professors’ group, the trails had been completely flooded by recent rains, appearing more like streams if anything. While inconvenient for the tourists and hikers, and at times even for our students collecting data, this showed that this trail was extremely vulnerable, and validated the student’s hypothesis right off the bat. She spent the next few days collecting data along one of the more popular trails, despite the wetness of it, and came home with lots of data to work with.

Also within the boundaries of Torres del Paine National Park, Dr. Katherine Goodall and Dr. Elliott Oakley (Lecturers in Political and Social Conservation) started a series of projects all investigating trail erosion. This park is frequented by thousands to tourists each year, especially during the Patagonia summer months November to February. As the park management struggles to balance the need for income from tourism and the trails that support it, this study will map the occurrence of erosion and trail branching events, vegetation diversity along trails, as well as examine hiker awareness of trail signs that aim to prevent degradation. Students had the opportunity to practice different research methods such as mapping, vegetation sampling, measurement of trail measurement, and interviews or surveys. By working in conjunction with CONAF, the National Park Service in Chile, SFS has the opportunity to evolve into a long-term trail monitoring effort for the park. This project is quite rigorous, with students walking double the 11km of the trail in order to collect data. Students returned each day to camp with sun kissed cheeks, pleasantly exhausted, and eagerly awaiting the beans, rice, and brownies at dinner. 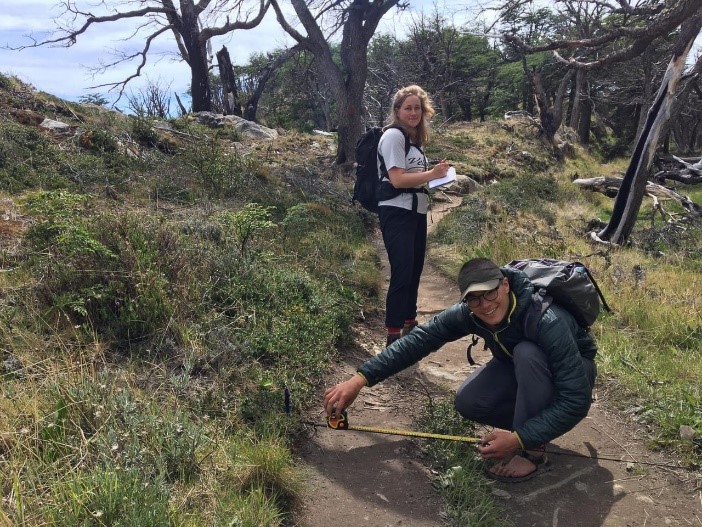 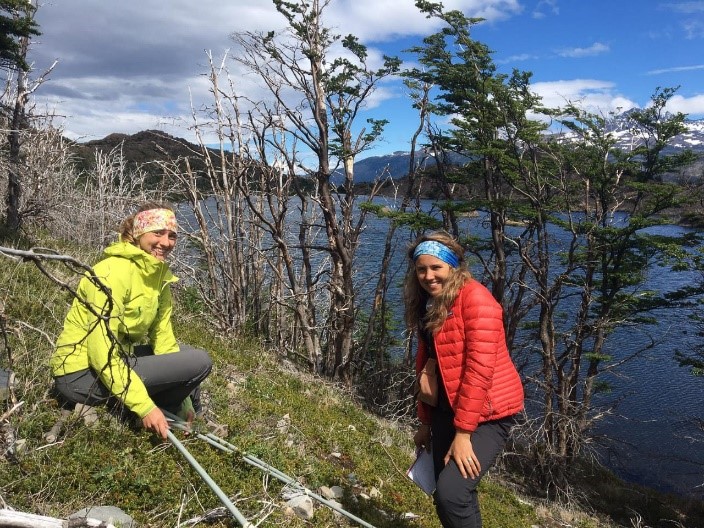 Directed Research is many students’ favorite part of the semester, where they get to put all the science and field research techniques they have learned over the past two months into practice. Plus, the increase in free time and freedom can be a welcome break after a very structured semester. One group hiked up a little mountain to camp and watch sunrise—something that would have been much more difficult to do on one of our traditional trips. The results from DR will be shared both within SFS at a scientific presentation and to the Puerto Natales community. We look forward to seeing what they discover. 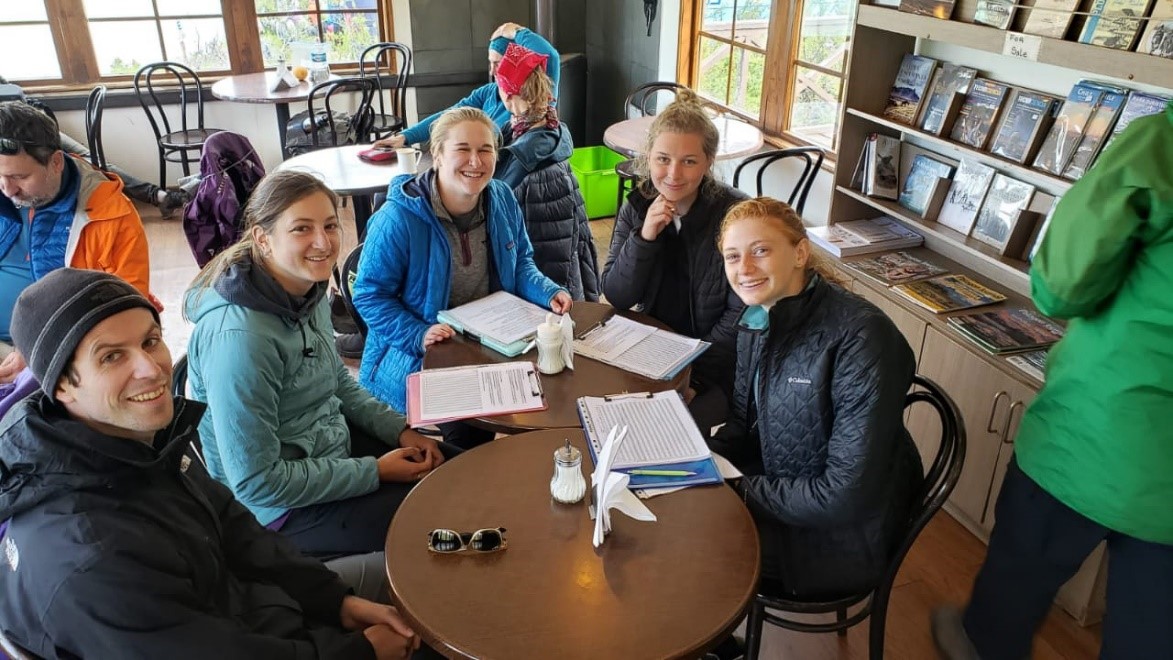 At the same time, Directed Research is its own challenge in comparison to the routine of academics here at SFS; students have had long days under the sun, camping in the rain, hiking through uneven terrain, and meticulously analyzing their data. However, the enthusiasm to carry out scientific methods for real life studies reminds students why they originally traveled all the way to the bottom of the world; little by little, students study land and life intimately while developing their own research skills. It requires constant communication, flexibility, and endurance. One could dedicate a whole semester, a year even, to complete the project that students undertake in the course of a month. Nevertheless, the stories and triumph from completing such a project demonstrates the passion and determination of these students to further understand climate studies and create change against global warming in Patagonia and their own communities. We look forward to sharing the results with our community partners and CONAF, fostering new studies on climate change in Patagonia. 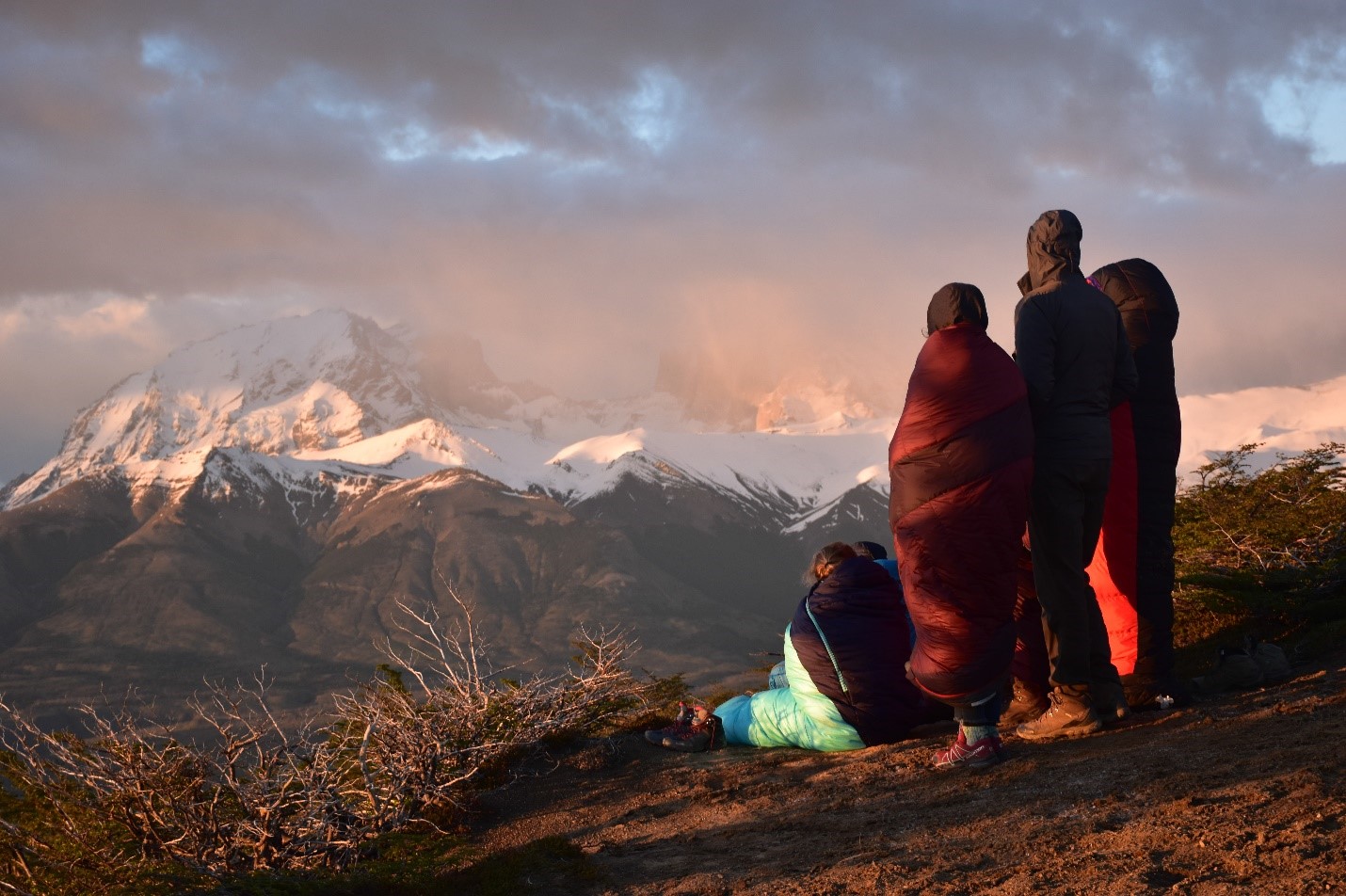 Students, snuggled up in their sleeping bags, at sunrise over the famous towers of Paine (a little hidden in the clouds). Photo courtesy of Jenny Thompson