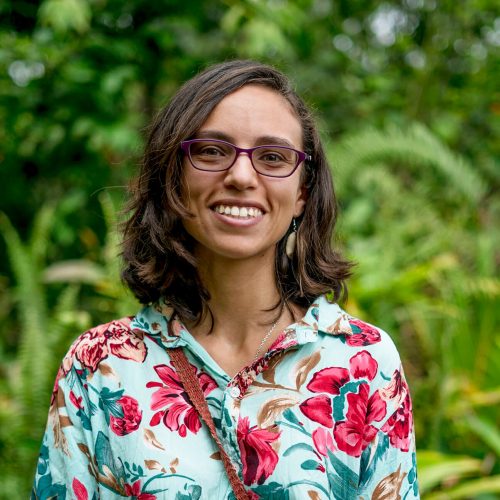 Recently, we traveled with our students on an extended excursion to the Sucusari River. This excursion marks our fifth semester visiting this area to explore medicinal plants, see mature forests from the heights, experience community-based conservation and learn from members of the village of Sucusari about their livelihoods and the issues that they face. 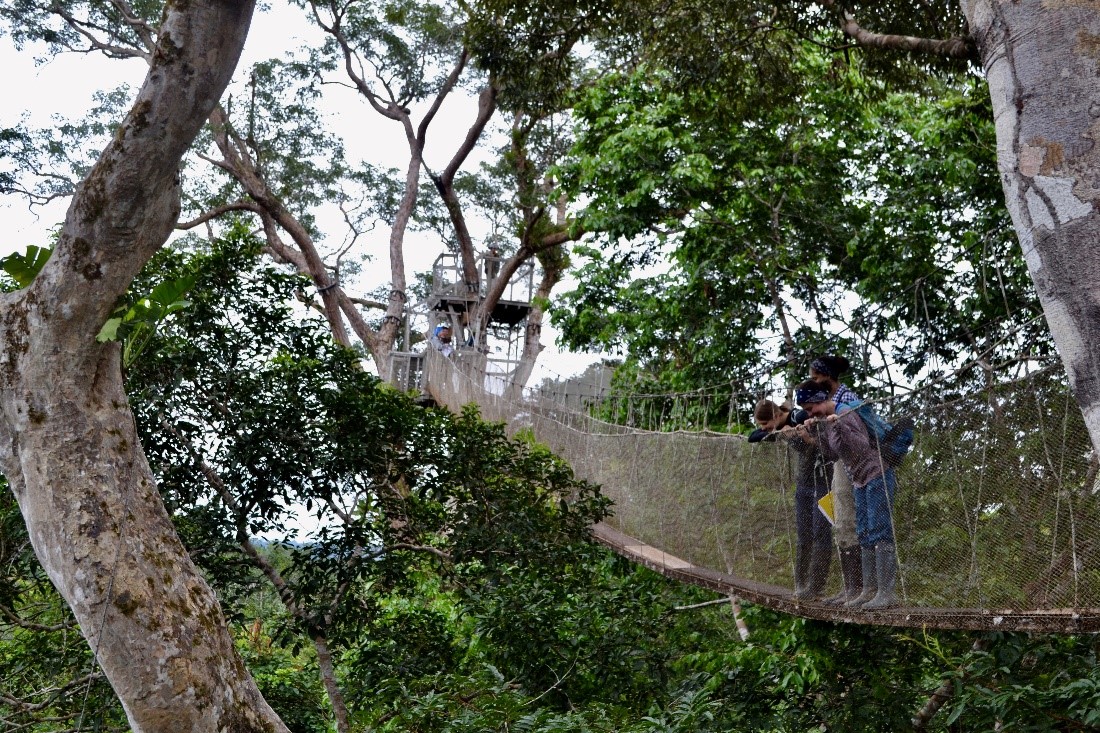 The visit to Sucusari offers students a wonderful opportunity to explore and experience several important themes that we had only up to now talked about in our classes. Starting shortly after our departure from Iquitos, we went for the first time on the mighty Amazon River, a fertile and sediment laden river (white-water river) that we discussed in our tropical ecology class on river types. On our arrival to ExplorNapo lodge, we received Sebastian Rios Ochoa, a local Maijuna elder, who taught us about the original language of the local Maijuna Peoples (Maijiki), its current endangered state, and his work for its preservation. Later, we had a field lecture on plant defenses against herbivory, which was enriched by our visit with Don Guillermo and Don Desiderio, medicine men who tend to the ReNu medicinal plant garden in ExplorNapo. They taught us about the variety of medicinal uses of native plants, several of which exploit plants’ chemical defenses for treating parasites and disease. 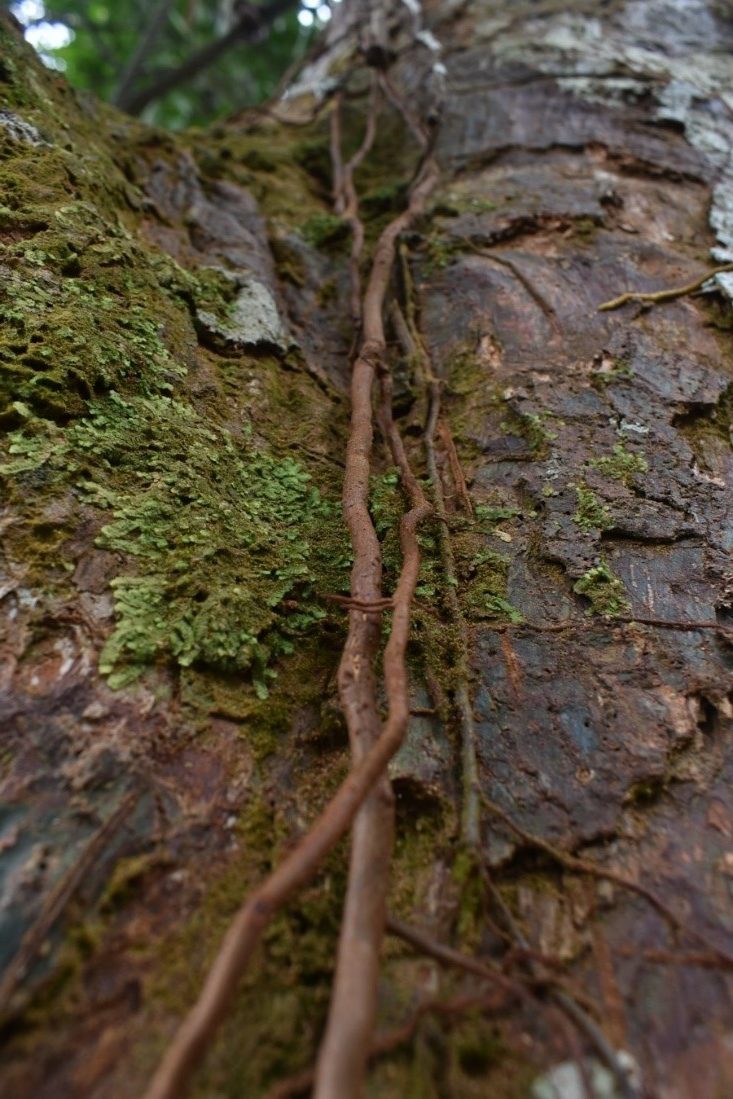 Life on top of life!

Our evening was filled with unexpected animal sightings around the lodge! In the late afternoon, we had a spectacular view of around 30 common squirrel monkeys (Samiri macrodon) that patrol these areas for food and refuge at night. Then, right before bedtime, a porcupine, an Amazonian opossum and an unidentified squirrel made an appearance just outside our rooms. 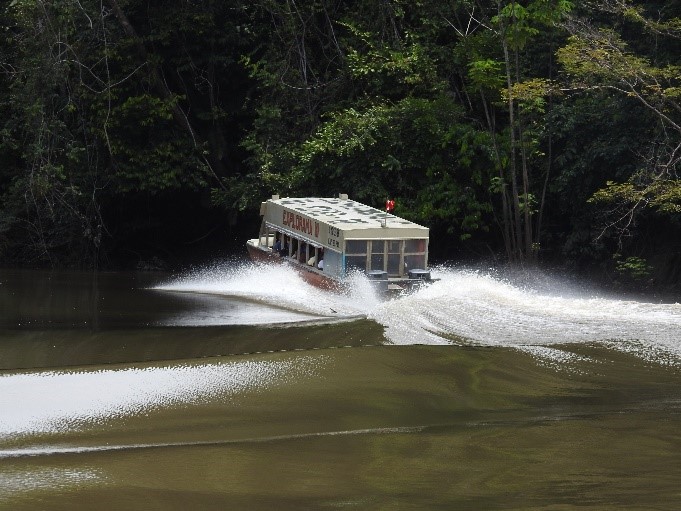 The boat on the way to Sucusari 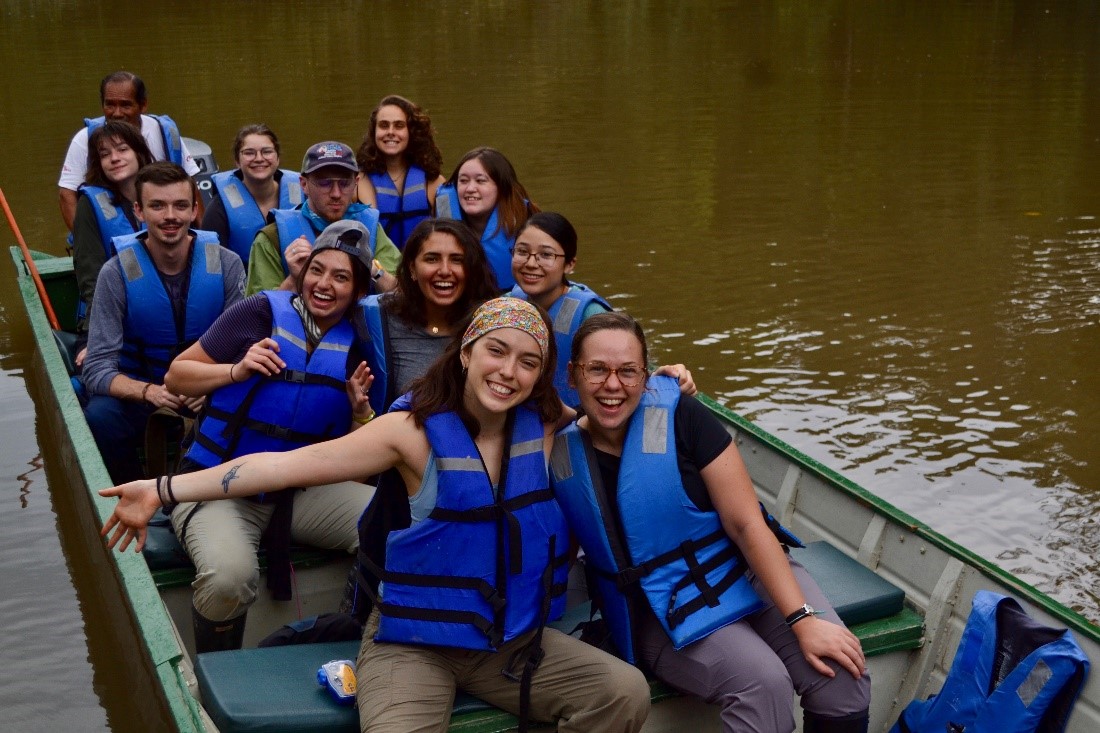 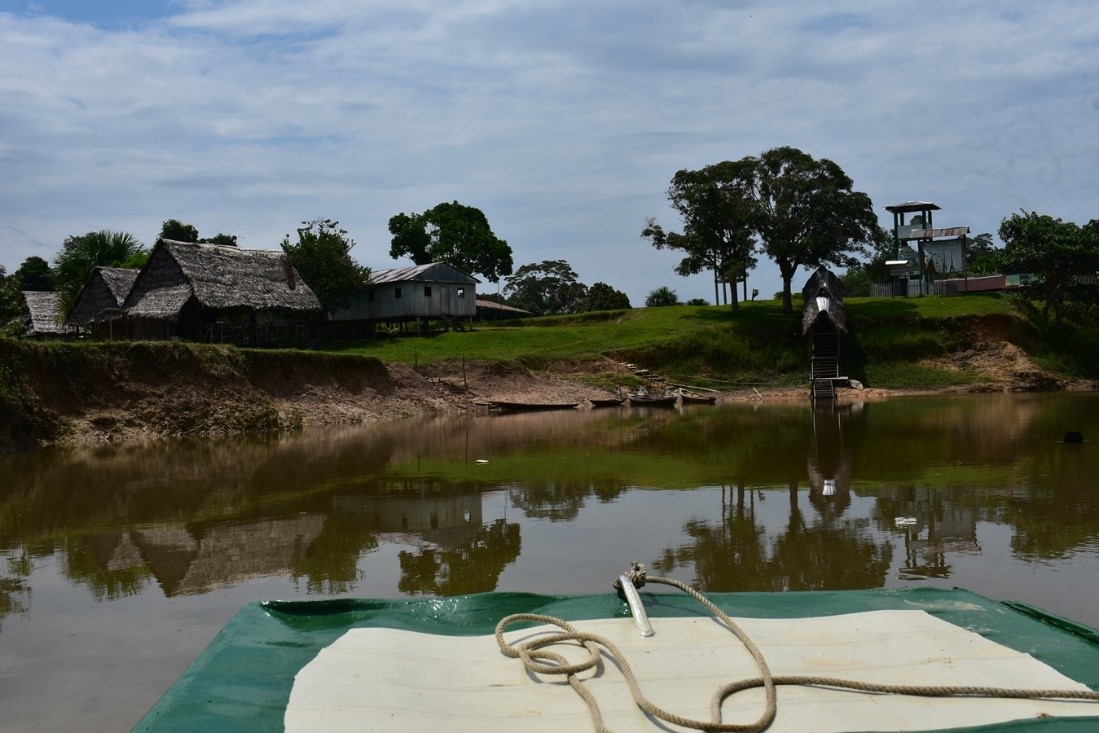 The boat arrives at Sucusari

The next day we visited the local community of Sucusari, a local Maijuna community that welcomes students and other visitors to learn about their livelihoods and culture. In the morning, community members taught us about their agriculture and hunting practices. Don Jairo and Doña Marina led us through a tour of their farm plots (chacras) and showed us how cassava is planted and harvested, as well as how they manage the rotation of planting and fallow cycles on the land. As a bonus, we were also able to see a barbasco plant (Lonchocarpus sp.), another plant with chemical defenses which they and other farmers in the Amazon have traditionally used to manage agricultural pests. 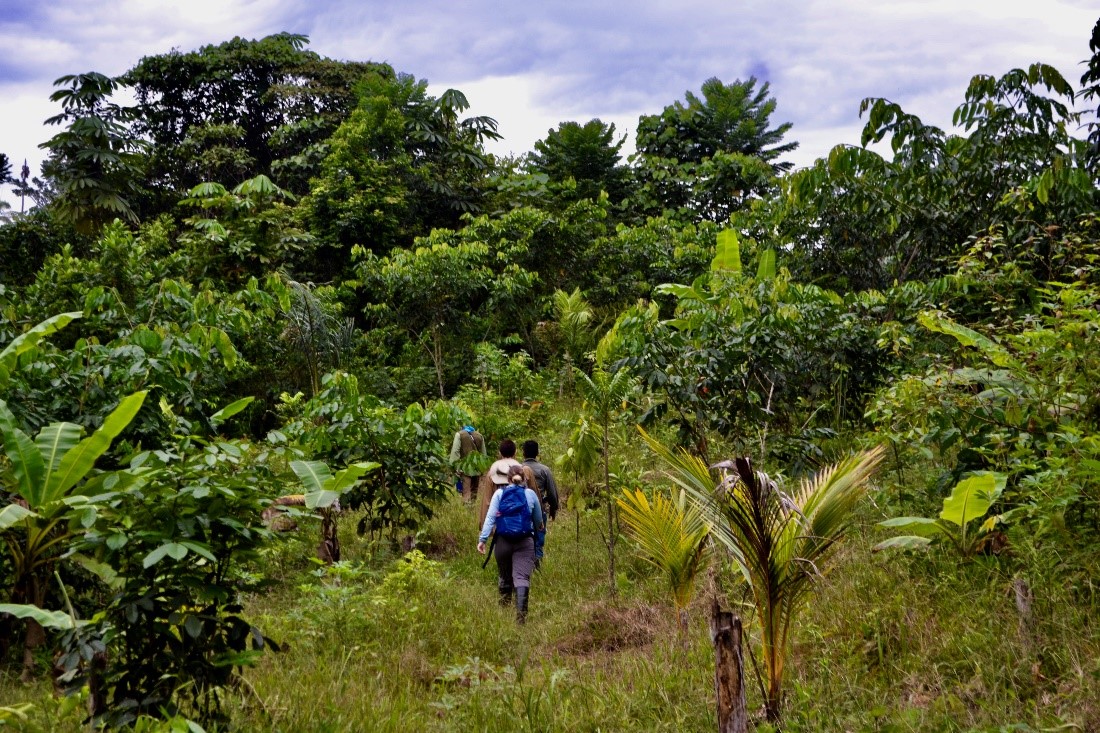 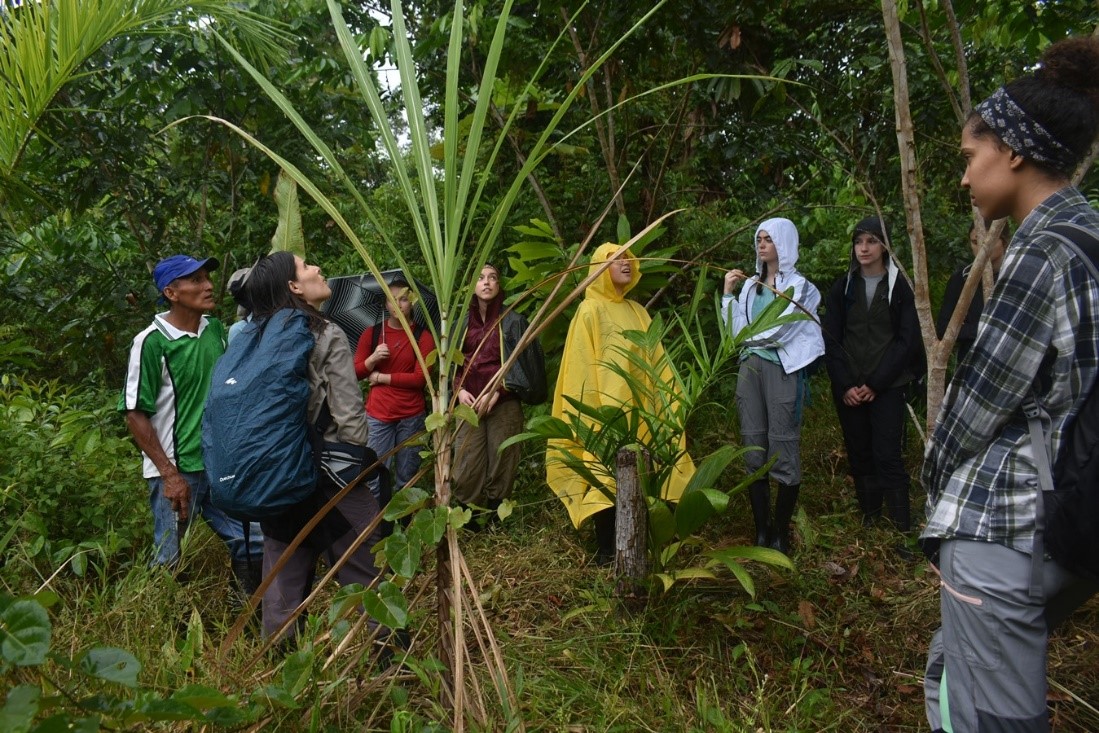 Getting a lesson on agricultural practices in the Amazon 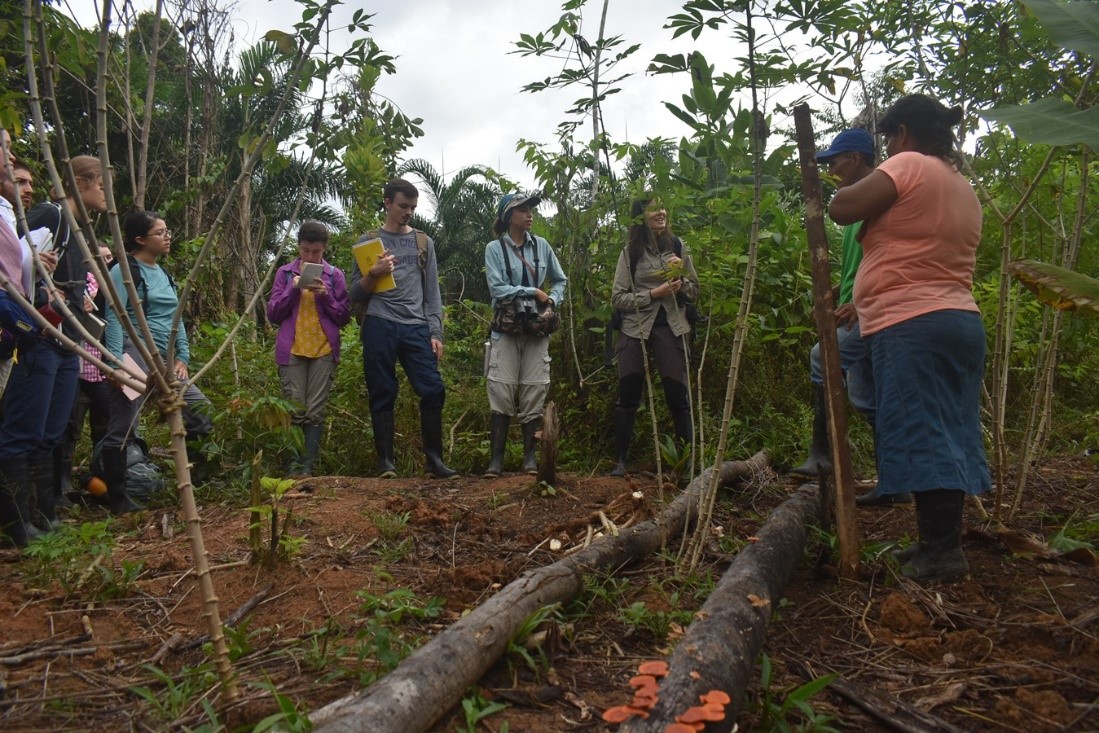 Learning about the process of growing yuca, an Amazonian staple, from start to finish

Later on, Don Victorino and Don Jorge, two very eloquent members of the community, led our visit to a nearby collpa (clay lick), a hotspot of animal activity, and explained their hunting practices to us as well as how the community agreed on setting rules and hunting quotas that allow for the conservation of wild animals while still providing them with food. Certainly, it was interesting to see that these rules, set independently by the community, were later supported by a camera trap project led by Dr. Mark Bowler. Hence, observing the close relationship, dependency and respect of the community with nature was an example of some concepts developed in our conservation science class about the conceptual shift from a conservation approach only based on expert opinions to one that also considers participatory co-management of protected areas. 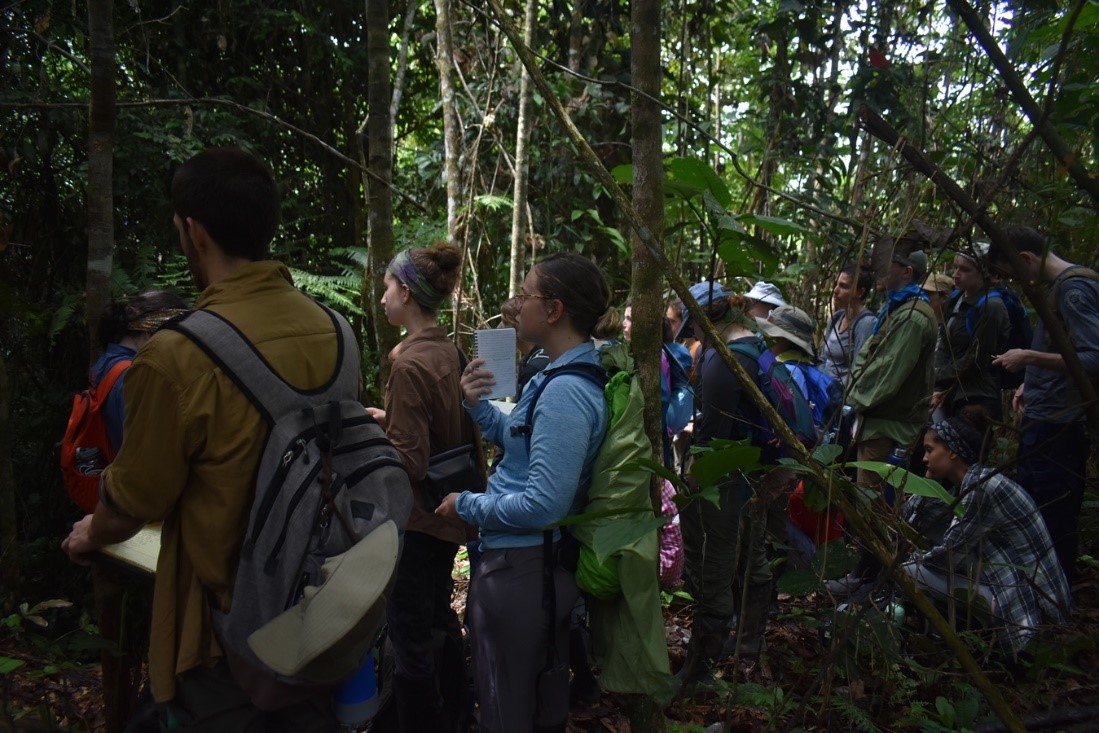 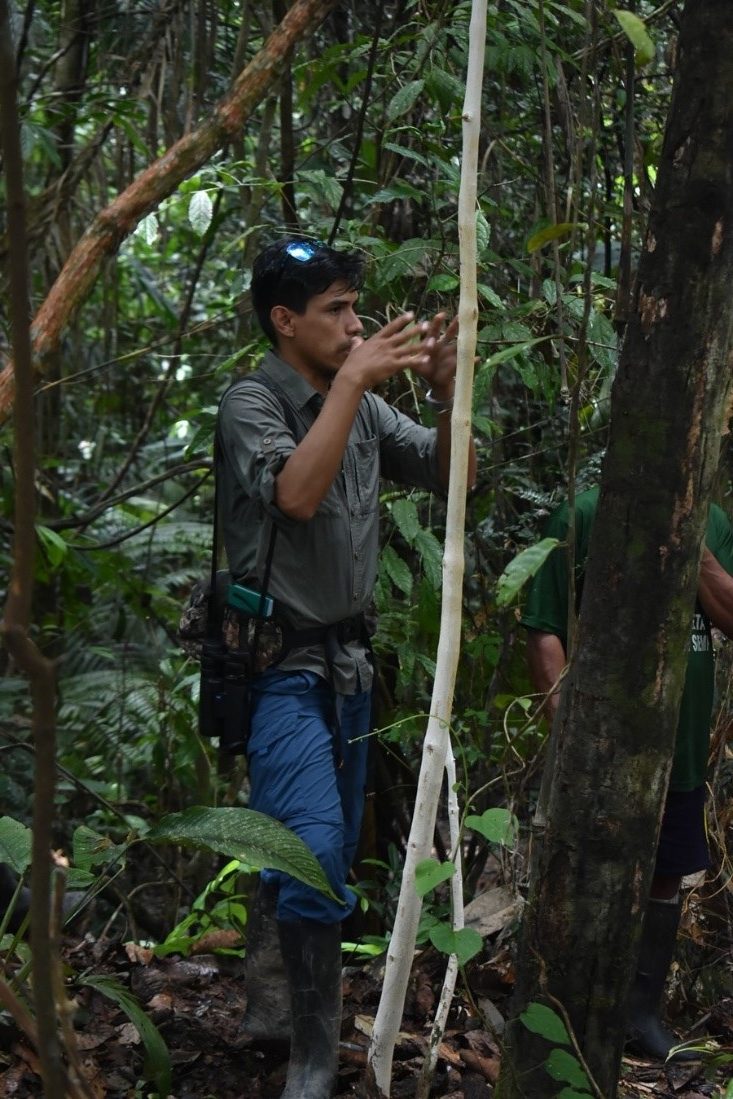 In the afternoon we were able to learn more about the history of the Maijuna Peoples and discover their cosmovision and traditions. We first visited a small and charming museum that offered us a trip back in time from the pre-Columbian lifestyle of Maijuna Peoples until their current situation, reviewing the most important historical milestones of the last centuries. After that, guided by some local artisans, we got to practice working with chambira palm (Astrocaryum chambira), from which a very versatile plant fiber can be obtained and used to create all kind of objects: from fishing nets to jewelry, but also plates and decorative animals. That same day, as part of our political ecology class, we also had the opportunity to interview different members of the community, including Maijuna leaders, very experienced hunters and farmers and chambira artisans. This allowed us to get to know more about their daily lives, their hopes for the future and the threats that they are facing. 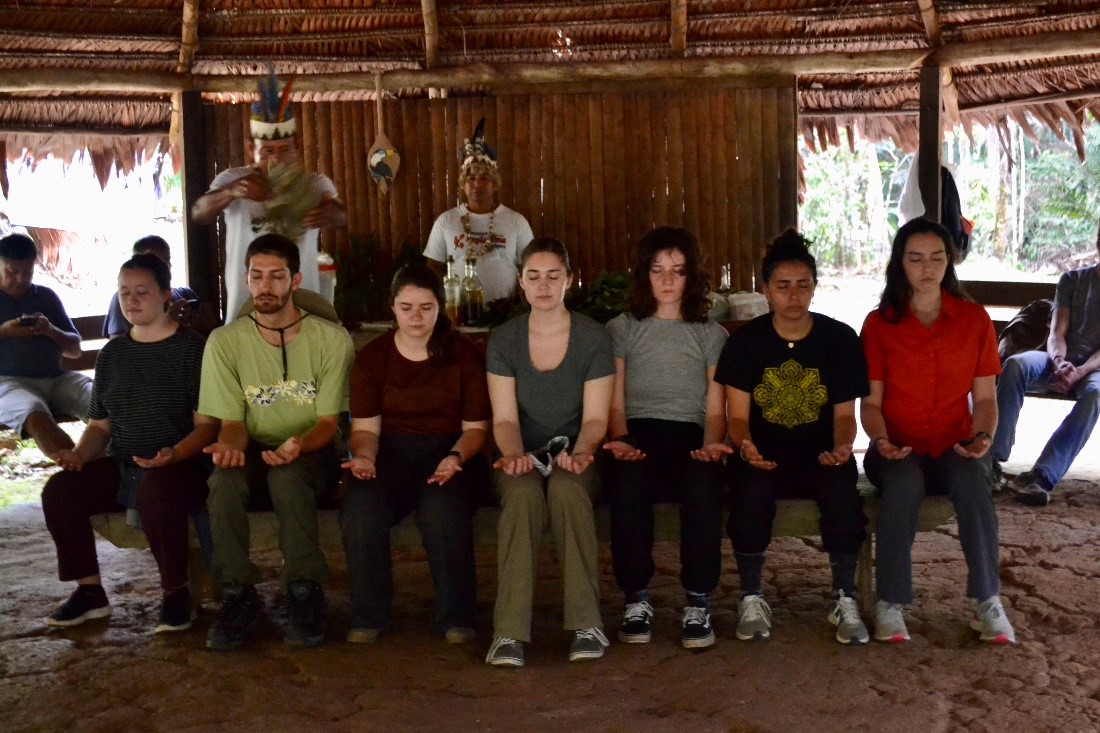 Finally, the following day we ended our visit with an activity at the ACEER Canopy Walkway, a mammoth series of bridges build into the canopy of a mature lowland rainforest. Climbing 37 m above the forest floor, we traveled vertically through the forest to get an epiphyte and birds perspective on their environment. Some of us were even joined by a mixed flock of birds during our visit! 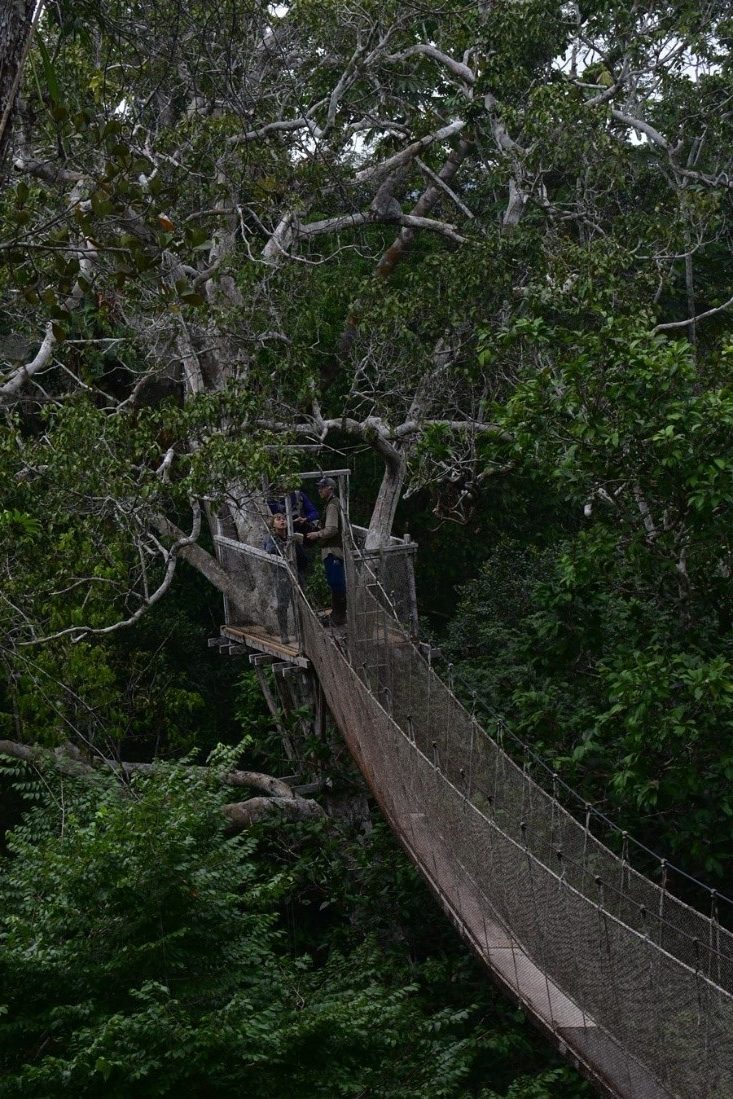 Several birds were observed from the ACEER Canopy Walkway. 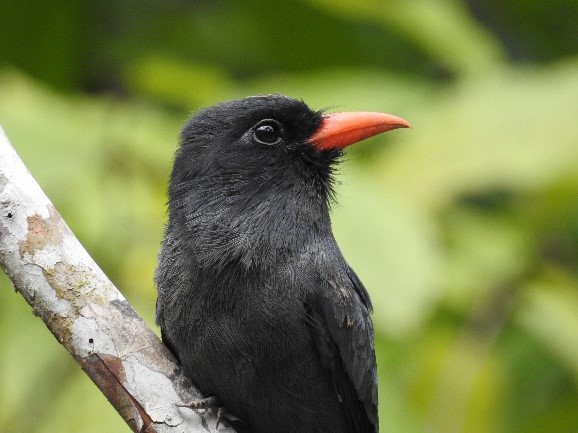 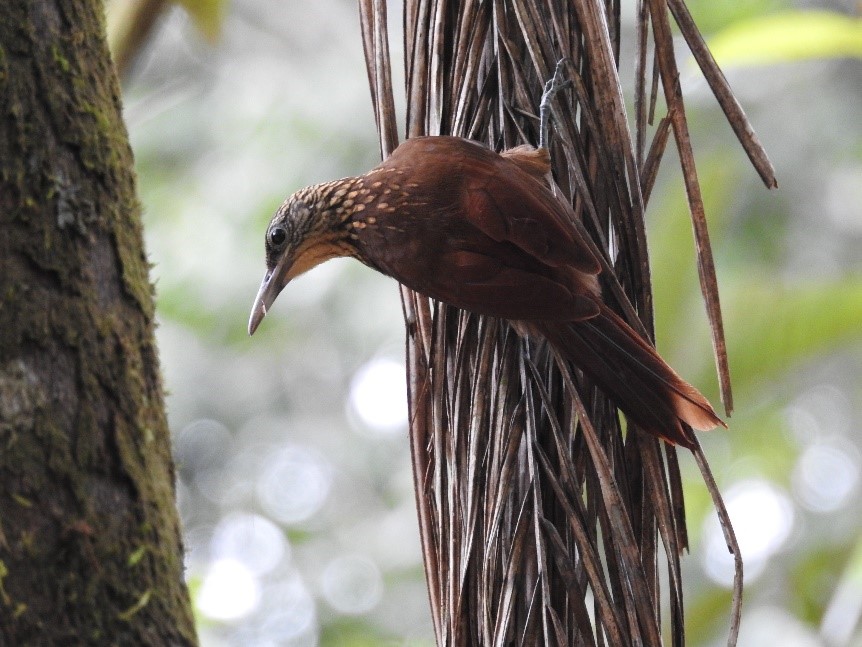 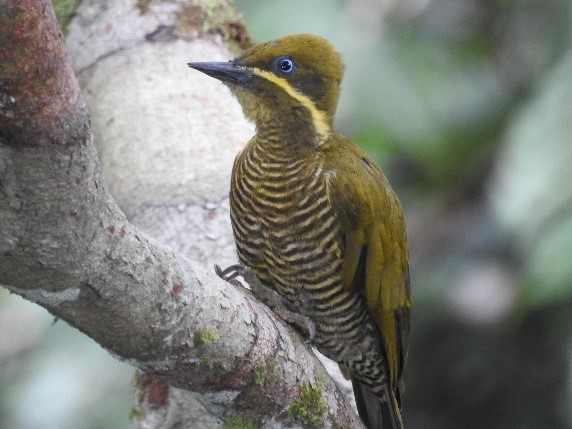 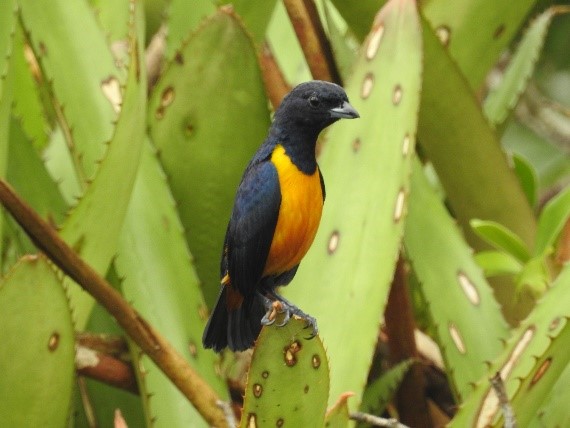 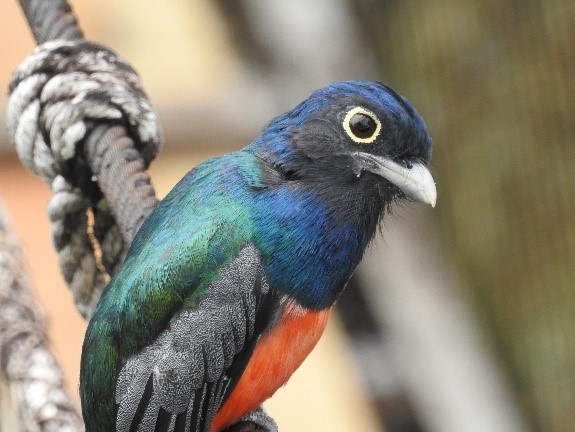 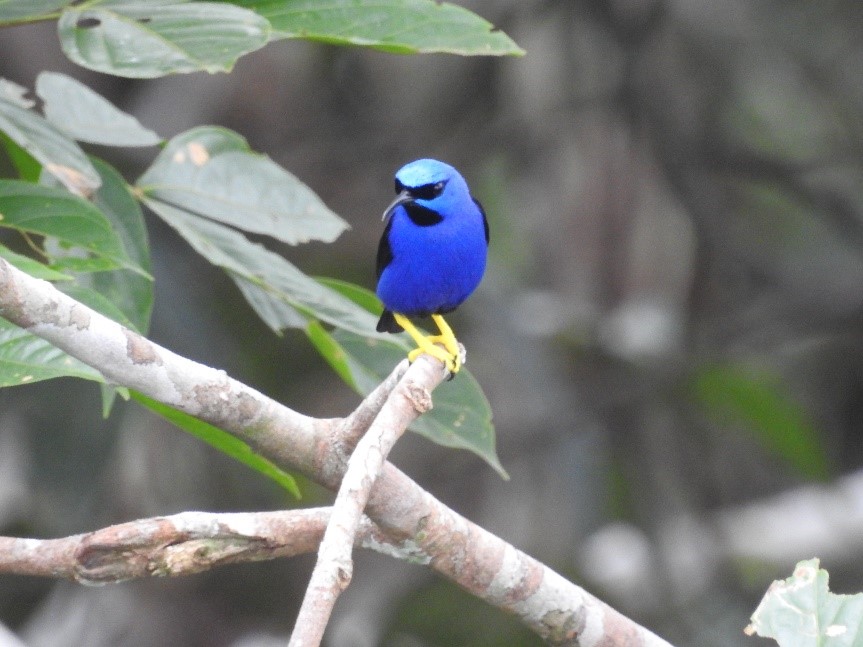