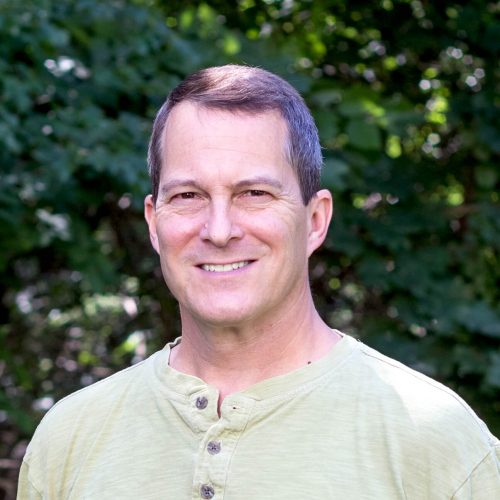 As part of our Student Research Spotlight, we are shining the light on two students who went to Cambodia to study the impacts of climate change on a village on the Tonle Sap Lake. Curious what they discovered? Read a synopsis of their research below! 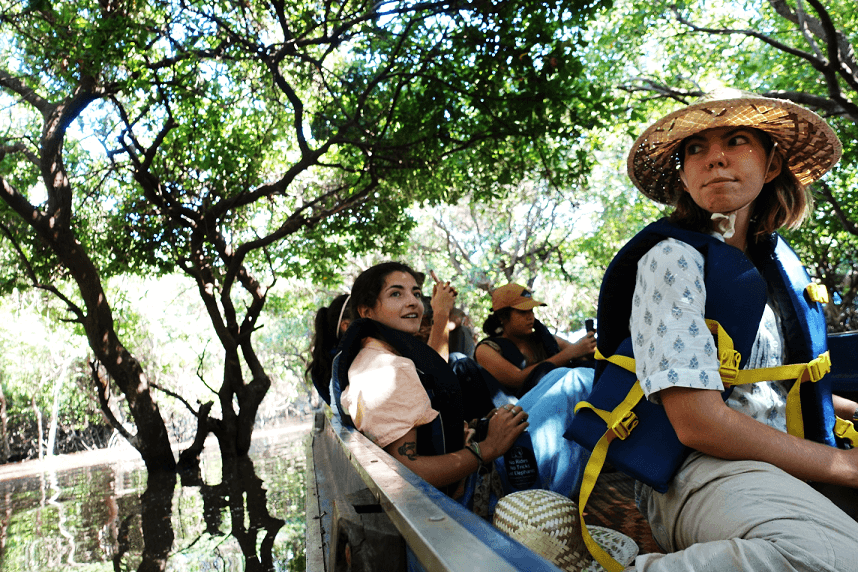 The Environmental Concern: Cambodia is highly vulnerable to climate change, ranking eighth out of 193 countries in the 2014 Climate Change Vulnerability Index. The country’s vulnerability stems from a high frequency of, and sensitivity to, climate hazards such as flooding. Ninety percent of the country’s population is dependent on depleting natural resources and live in rural areas that may be flood prone. There also lacks strong governmental support of vulnerable people in the country.

Fisheries are of particular concern. Eighty percent of Cambodia’s protein comes from fish and many livelihoods depend on resources from the country’s freshwater systems. Climate change and human development are degrading water quality and reducing fish populations, and these impacts are expected to rise over time. The Tonle Sap Lake is one of the world’s most productive inland fisheries and accounts for sixty-seven percent of Cambodia’s fishing industry. The Tonle Sap not only provides fish protein and supports livelihoods, but it is also ingrained in Cambodian culture. However, the Lake’s economic, ecological and cultural value is threatened, making it a critical area in which to study climate vulnerability.

This study aimed to assess the vulnerability of a Tonle Sap Lake community using three indicators: 1) the level of exposure to climate events and impacts; 2) the degree of sensitivity of fishing livelihoods and fish populations to climate change; and 3) the adaptive capacity of those who are dependent on fishing livelihoods.

The Methods: The study took place in the village of Prek Sromoach in Siem Reap Province, Cambodia. Investigating climate change vulnerability is particularly relevant to people here due to their reliance on fish and other freshwater resources. This village has also experienced flooding and other environmental challenges in the past that have harmed their livelihoods.

SFS students developed a bottom-up methodology to assess community vulnerability to climate change through a livelihoods lens. With the assistance of an interpreter, students conducted one-hour semi-structured interviews with 30 households in the village. Interviewees included key informants such as the village chief and community fishery leaders. 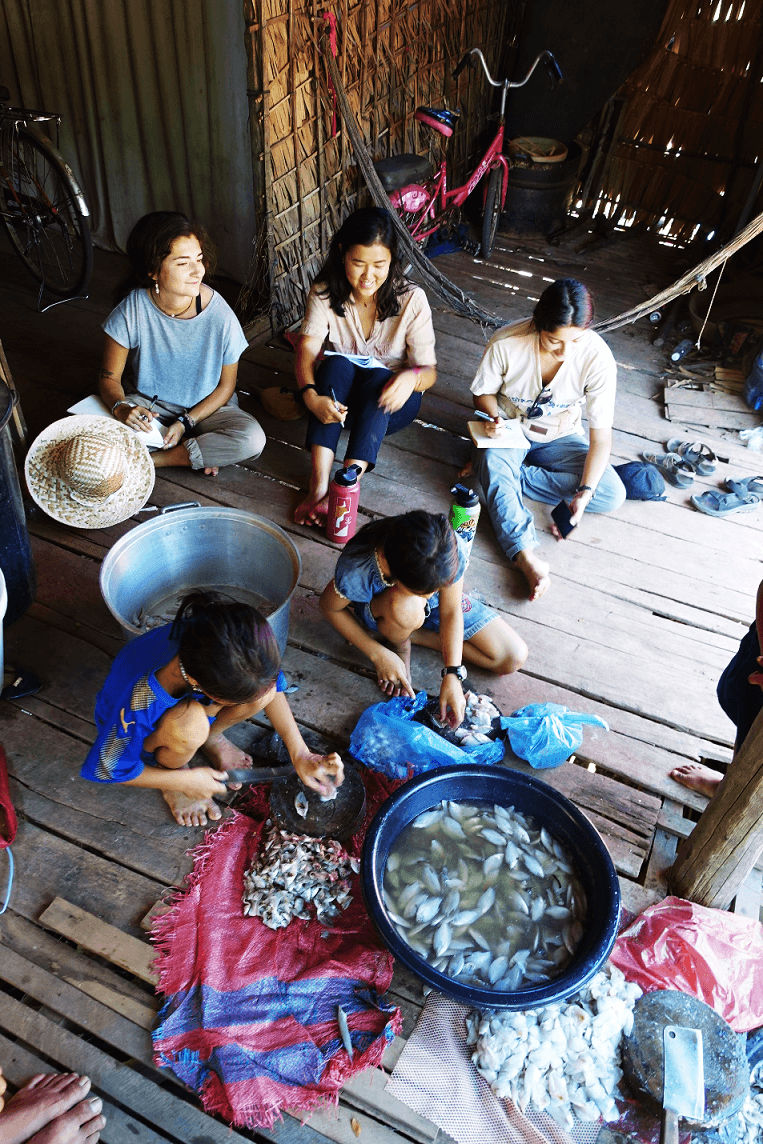 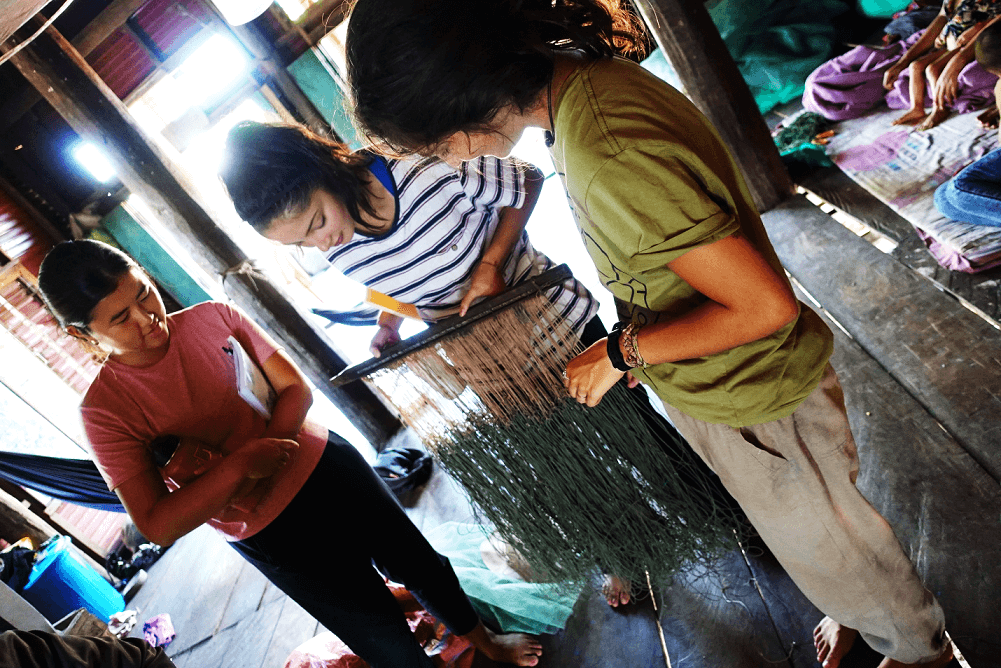 Learning about traditional fishing gear on the Tonle Sap Lake

The Results: Most villagers noticed that rainy season arrived later than usual in 2019 and that water levels in the Tonle Sap receded more quickly than in previous years. Ninety-two percent of interviewees also noted a significant decline in fish populations and daily catch. Climate change, hydropower development, deforestation, and illegal fishing are likely to exacerbate the pressure on fishing livelihoods. These results are consistent with academic studies on the lake’s fish stocks and indicate that Prek Sromoach demonstrates a high degree of sensitivity to climate change.

The Impact: The lack of livelihood options may have worrying implications related to the community’s limited capacity to expand their skill sets to seek out new jobs in the village and elsewhere. Several respondents said they migrated seasonally to take up jobs in the construction and industrial sector in Cambodia or Thailand, however, many respondents lacked the financial means to switch livelihoods or to migrate for work. The adaptive capacity of the village to climate change therefore appears to be somewhat low.

These results indicate that Prek Sromoach is highly vulnerable to climate change. This study contributes to a consensus among researchers that Tonle Sap Lake communities may be disproportionately subject to the adverse impacts of climate change. 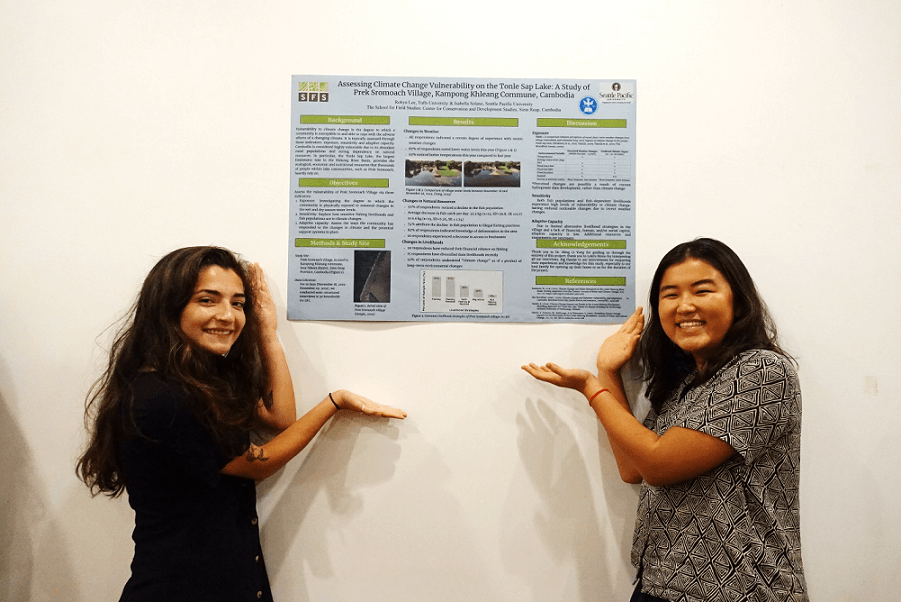 Bella (left) and Robyn (right) and their poster presentation at community night!