Hunt for the Red-Eyed Tree Frog

For now, the red-eyed tree frog remained elusive. But there was always tomorrow night…

As someone who has always sought out the opportunity to get my hands dirty over being in the classroom, I knew almost immediately upon exploring study abroad options that SFS was the program for me. Our first field trip of the semester, about nine days after we arrived in Costa Rica, couldn’t arrive soon enough. As with most days here, we began early in the morning, departing from the center in Atenas for an hour and a half or so bus ride to Braulio Carrillo National Park. Here, we spent several hours hiking through the forest and learning a great deal from our professors about tropical forest dynamics and the flora and fauna in our immediate vicinity. Highlights included observing large flocks of tanagers flying about the canopy and troops of howler and white-faced capuchin monkeys!

After the hike and lunch in the field, we boarded the bus again and headed to the Manú Center, where we would be spending the next couple of days. Admittedly, this was the portion of the trip I was most looking forward to. As the son of a herpetologist, I’ve always been immensely passionate about reptiles and amphibians, and in the briefing for the trip our Tropical Ecology professor Victor promised we would be observing lots of these at Manú, especially during the two night hikes that were planned. Most notably, Victor mentioned that red-eyed tree frogs are common in the Manú area, and I could barely contain my excitement. I’ve always considered red-eyed tree frogs to be one of the most beautiful species in the world, and for me the chance to see them in the wild is at the very top of my bucket list. Having visited Costa Rica once before several years ago, I spent a great deal of time looking at every chance possible, but this was during the dry season and they were ultimately nowhere to be found. I’d returned this semester with a renewed determination to encounter a red-eyed tree frog in the wild and I simply refused to be denied this time around.

Our first afternoon in Manú was spent exploring the grounds and playing pool and ping pong in the game room. This was lots of fun, yet in the back of my mind there was a constant anticipation for darkness to arrive and bring out the frogs in full force. Finally, once dinner was over, it was time to head out, and we donned our headlamps and rubber boots in preparation for anything and everything the rainforest might throw at us. The plan for tonight was to split into two groups: one would start off looking for frogs with Victor and Kenneth, our guide at the center and someone who I’m convinced possesses a supernatural ability for locating herps. The other group would go with our Natural Resource Management professor Milena and SFSCR program assistant Mapache, an expert in all things bats, to check mist nets that they had set before dark (check out Mapache’s recent blog post for lots of fascinating bat information).

I, of course, started off in the herp group. With eyes peeled and headlamps constantly scanning, we scoured the forest around the center. It quickly became clear that there were a lot of frogs around; the sound of clunky rubber boots shuffling along the forest floor was punctuated by shouts of “I found one!” and “Over here!”, followed by an immediate identification by Victor and notes being scribbled into waterproof notebooks. The highlight of the night came when Kenneth located several crowned tree frogs in the understory. This beautiful species is quite rare and exists only in fragmented populations throughout a few Central American countries. Victor made sure to emphasize that we were extremely fortunate to be able to observe them. Eventually, it came time to switch groups and look at bats with Milena and Mapache. Although I was thrilled with all that we had seen in just a relatively short period, I couldn’t help but feel slightly disappointed that there had been no red-eyed tree frog sightings. At the end of the night when we all reconvened, I immediately checked whether the other group had seen any, but they had no such luck either. For now, the red-eyed tree frog remained elusive. But there was always tomorrow night… 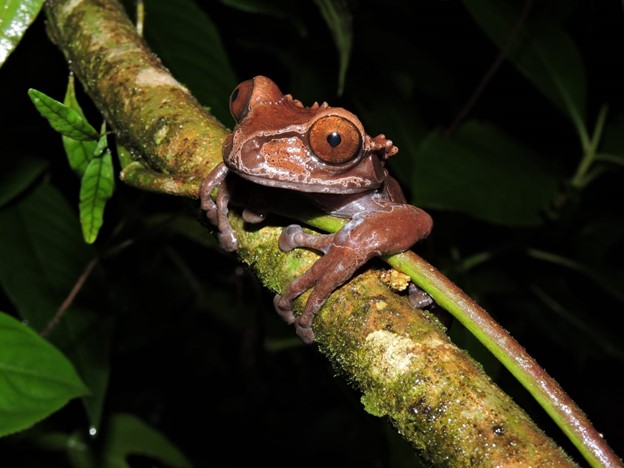 Our next day involved several hours of hiking among the trails around Manú and observing more species of plants, herps, and bats. We also had more relaxation time after lunch, the majority of which was spent in a refreshing swimming hole formed by a dam on the stream running by the center – a much welcome treat after the heat of the earlier hike. Just as we did the day prior, once dinner was over we equipped ourselves with recharged headlamps and rubber boots and headed for the forest. However, this time, almost immediately after we left, it started to rain. Hard.

Soon after, Victor said that due to the intensity of the rain, it might not be worth it to stay out any longer. A sense of desperation began to creep over me; this was our last good chance for a red-eyed tree frog sighting and suddenly it might be over before it even began. Victor consulted with Kenneth and, spurred by the group’s collective desire for a red-eyed tree frog, they hatched a plan: we would walk a short distance to a nearby pond. By now, the rain had become torrential and was pelting us in sheets. I soon gave up trying to make out where we were going and just followed the bobbing headlamps of those in front of me. At this point, our boots and raincoats were holding in about as much water as they were keeping out, but I hardly noticed. I was simply too focused on looking for any sign of a frog. Suddenly, the line in front of me came to an abrupt stop. And it was for the best possible reason: Kenneth (who else?) had spotted it–a red-eyed tree frog! 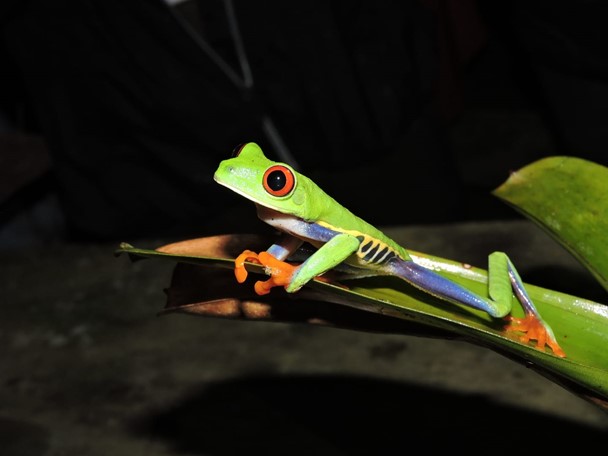 That night, after drying off and getting settled into bed, with the sound of the rain on the tin roof of our cabin luring me to sleep, I reflected on what had been an amazing, strange, and illuminating time at Manú. In our nighttime expeditions, we had had no trouble finding a number of rare crowned tree frogs that even some seasoned herpetologists have never had the fortune of encountering. And yet, the red-eyed tree frog, perhaps Costa Rica’s ultimate poster child and a widespread species, had proven exceptionally difficult to find and nearly eluded us completely. What a strange phenomenon! More than anything else, to me this experience served to reinforce just how important it is that we continue to study the natural world and seek to understand it to the best of our ability. Nature, no matter how much we make it fit neatly into our classifications and principles, is ultimately unpredictable. I find a particular beauty in this uncertainty, but also a reminder that one of humanity’s most pressing challenges must be the love, protection, and restoration of our natural spaces.

It’s been almost a month and a half since our time at Manú and, looking back, I can honestly say what a fantastic introduction it was to what so far has been a wonderful semester abroad in Costa Rica. Pura Vida!

Curious to learn a bit more about the SFS Costa Rica Center? Click here to read about why we’re based there, our environmental research focus, how we connect and support the local community, and even take a tour of the Center.