Directed Research in the TCI

Being a Waterfront Assistant at the Center for Marine Resource Studies is a rewarding experience, especially during Directed Research! We assist faculty and students, both in the field and in the lab, while they carry out different research projects on South Caicos. This semester, we have three research groups: one studying marine debris, one assessing diver impact on South Caicos reefs, and one conducting a behavioral analysis of Octopus insularis and Octopus briareus. Read on for a glimpse of the cool work students are doing here in the TCI!

Anthropogenic marine debris are classified as man-made waste products that directly and indirectly end up on beaches and in oceans. While rubber, glass, metal, and other artificial materials contribute to anthropogenic marine debris, plastic is the largest contributor because it never completely degrades. Instead, plastics break down into smaller and smaller pieces that drift in the water column or become deposited on beaches, becoming persistent microplastics that are less than 5mm in size. These microplastics are ingested by marine organisms where they can accumulate up the food web, with humans as the final consumer. Marine debris is a global issue, evident by the five garbage patches caught up in oceanic gyres (i.e., the Great Pacific Garbage Patch). However, small islands, such as South Caicos, are also known hotspots for anthropogenic marine debris. South Caicos has strong storms and eastern trade winds that bring in trash from the sea. Additionally, the lack of resources to manage or recycle waste products adds to the amount garage on South Caicos beaches.

Students in this research group, led by Dr. Kassandra Dudek and Waterfront Assistant Julia Locke, collect marine debris at various locations on South Caicos to analyze differences in both the composition and the source of the debris found on leeward and windward beaches. While also collecting microplastics visible to the human eye, the students will visit several locations twice to calculate accumulation rates to analyze how fast marine debris amasses. Their ultimate goal is to formulate solutions for the local government on how to further manage marine debris brought in by ocean currents and produced on the island. 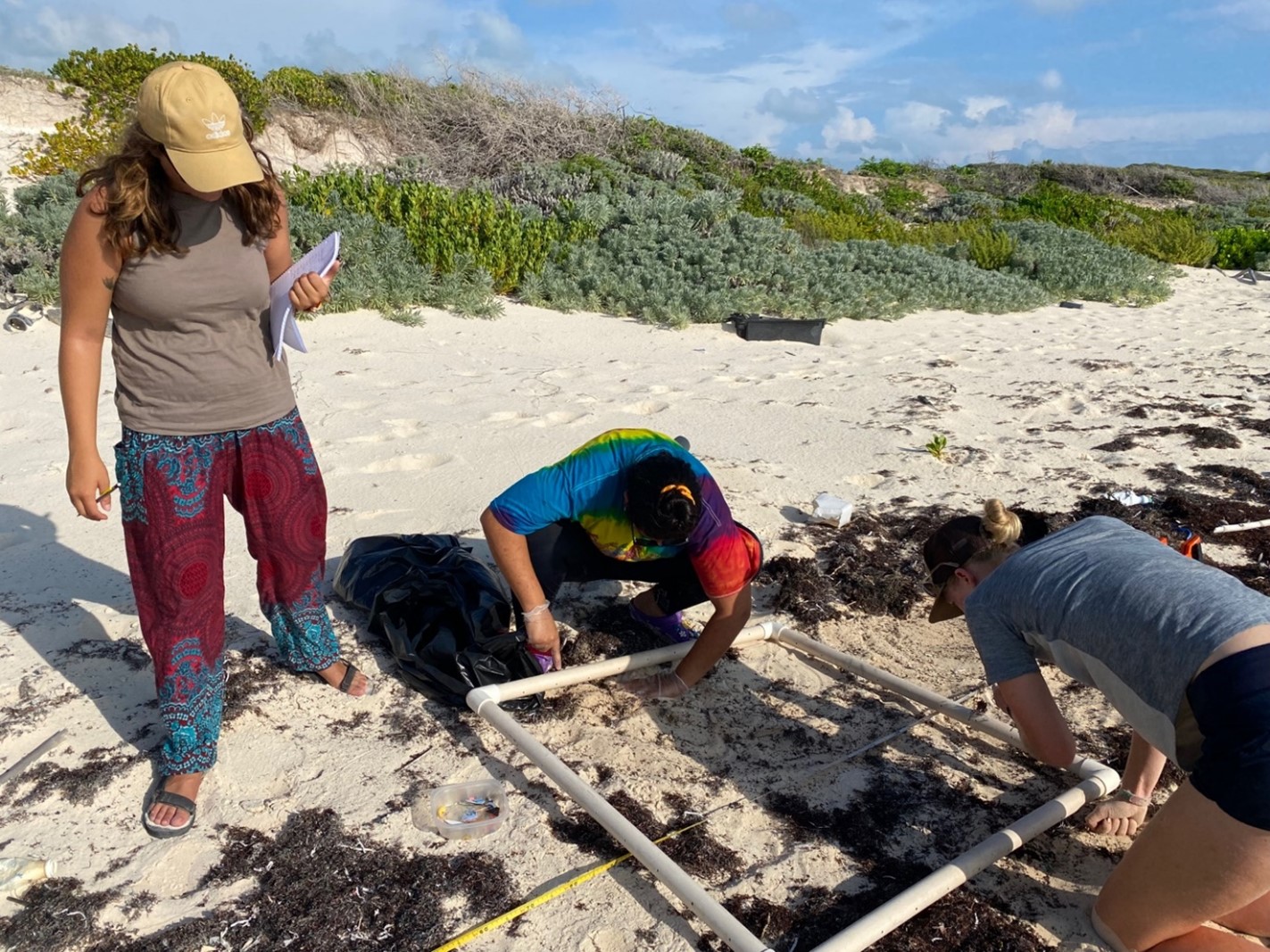 Students search for microplastics within a quadrat along their transect. Photo by Julia Locke.

Octopuses can be difficult to find due to their unique ability to camouflage by changing color and texture to blend in with their surroundings, but if you know their feeding patterns or where their dens are located, you can more easily observe their behavior. Led by Dr. Caitlin E. O’Brien and aided by Waterfront Assistant Sydney O’Brien (no relation), students have begun to investigate two species which are common here on South Caicos.

The first, Octopus insularis, uses large crevices in rocky substrate as dens. These can be easily distinguished from other holes by a pile of shells outside (“middens”, which are their discarded meals) and allow easy observation of the octopus living inside. Students have been collecting data on activity budgets using an Octopus Monitoring Gadget (OMG), a camera inside of a waterproof (and octopus-proof) housing, placed outside of dens to film behavior for 24-hour periods. Students will then analyze this footage to determine how this species spends its time, whether feeding, resting, or performing other behaviors.

A second frequently seen octopus, Octopus briareus, cannot be investigated with the same methods, as their dens are difficult to locate and the entrances are too small to allow the animals to be observed. Since this species is a nocturnal feeder, students have been searching for them while snorkeling and diving in shallow rocky regions at night. Students are filming the foraging behavior of this species and will later analyze the footage to determine if there is any correlation between color patterns, behavior, and substrate. Both projects provide students with the unique opportunity to study species about which little is known. The baseline information about behavior and ecology gathered in this project will contribute to our general understanding of octopus biology, with broader implications for fisheries management, ethology, and even robotics. 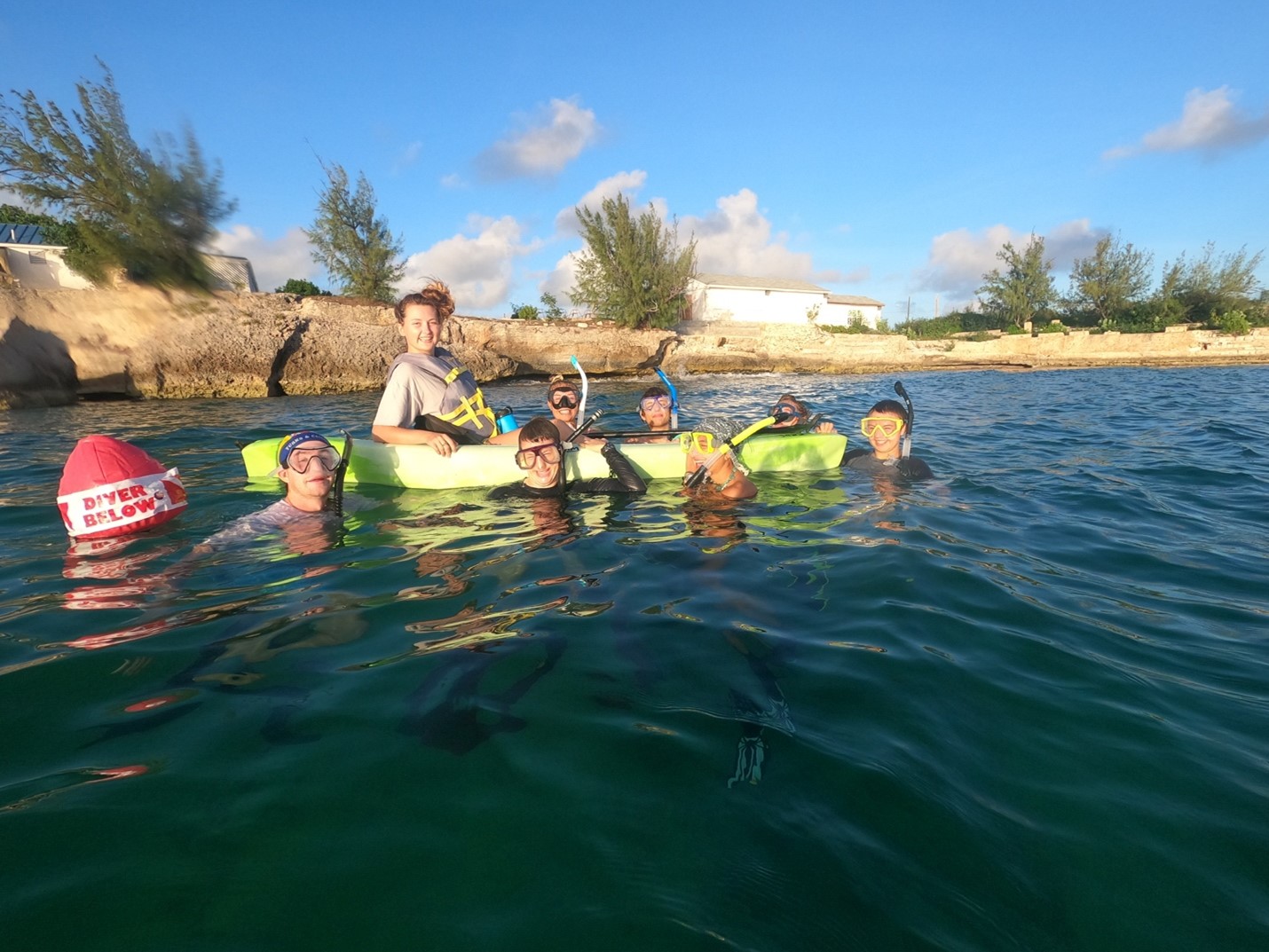 The octopus research DR group out on a swim-zone snorkel. Photo by Tanner Reugg. 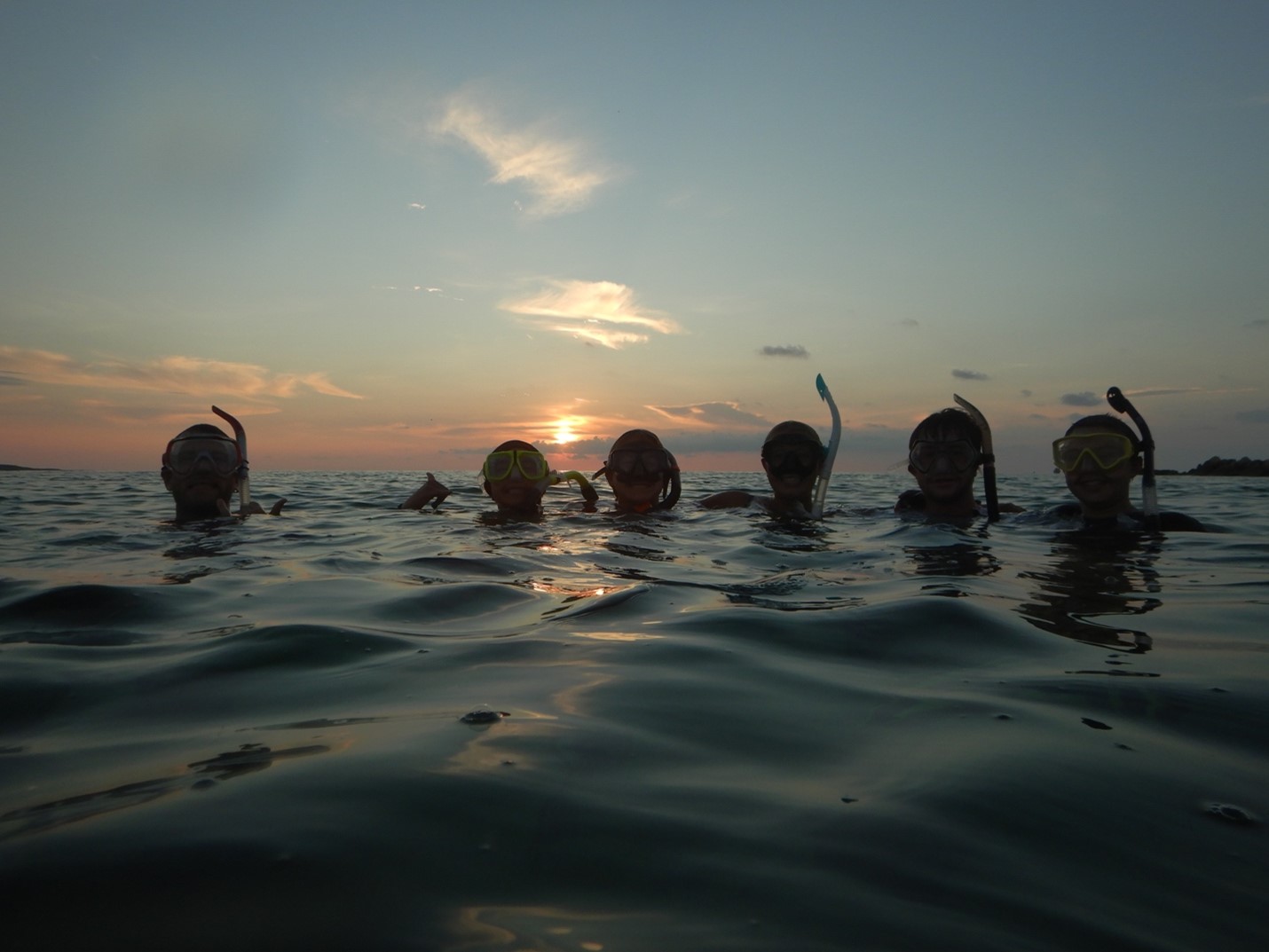 The group getting ready for a night snorkel to look for octopus. Photo by Caitlin O’Brien.

With an increase in tourism to the Turks and Caicos Islands, the number of divers entering our waters are higher than ever. Therefore, a group of students, led by faculty member Courtney Pickett and Waterfront Assistant Skylar Wuelfing, are looking to create a baseline study investigating the overall health of the reefs through looking at damage caused by divers. Not all impacts are intentional – sometimes divers accidentally cause breakages through hand holding, fin touches, and dangling gear.

We are looking to investigate now as a new diving company has moved to South Caicos and is expanding the number of dive sites as well as increasing the number of divers enjoying the reefs. Because this development is just beginning, we have the ideal conditions to allow ourselves the most accurate data. Over time, we plan to determine whether there is a relationship between the health and diversity of corals at a dive site and the number of divers there.

Past studies have indicated that a reef has a carrying capacity, or the number of divers that can visit that site annually before the reef begins to degrade. Through analyzing dive logs from the School for Field Studies, alongside dive logs from a local dive resort, we anticipate that the reefs on South Caicos will see over three times the purported carrying capacity in one year.

Our goal is to create a baseline of four different sites: two recently created sites and two previously established sites that have seen high levels of diving. By doing so we can compare reef conditions and help inform best management practices as the reefs are seeing more divers. With the addition of divers to South Caicos, it is increasingly important to monitor diver impact to maintain the integrity of the reef for the fisher community and the continuation of tourism. 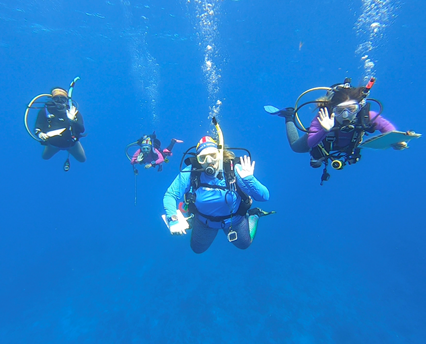 Students on a research dive at the Grotto. Photo by Skylar Wuelfing.

Curious to learn a bit more about the SFS Turks and Caicos Islands Center? Click here to read about why we’re based there, our environmental research focus, how we connect and support the local community, and even take a tour of the Center.