It was amazing how the Maasai herders were able to integrate with the wildlife with ease as they watered their livestock in the swamps of Amboseli National Park.

The much-anticipated field excursion of the Spring 2022 semester began with four days of camping and academic sessions in Amboseli National Park, and the students were super excited for this experiential learning experience. The expedition began with a one-hour drive from the Center to Amboseli gate, and upon arrival, students met enthusiastic Maasai women selling diverse ornamented beads and other items usually sold to tourists. This gave students an opportunity to gauge their prowess of the Swahili language, and, surprisingly, some students got fairly good prices for numerous items they bought.

The first academic activity of the first day in the park was a field lecture on the use of biosphere reserve to conserve biodiversity and linkage to communities’ socio-economic wellbeing. Students also learnt about other key aspects of the park, especially its ecological health and ability to support viable wildlife populations, in particular the high population of elephants found in the larger ecosystem. On arrival at the campsite, students came face to face with a group of habituated yellow baboons, which almost went on a rampage, grabbing anything that seemed edible. Some of the baboons were mating and a notable moment was when an alpha male baboon was aggressively fighting off other young males. All this gave students an opportunity to observe and learn some aspects of yellow baboon behavior. 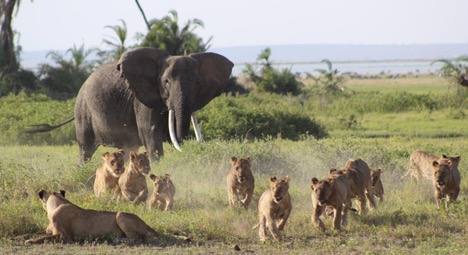 Amboseli is a completely spectacular sight and has best view Mt. Kilimanjaro, which is a free-standing mountain. It is home to a diverse assemblage of species of birds, mammalian wildlife herbivores, large carnivores, and all of the wild animals you can imagine. The park is warmer than the Kimana area where SFS-Kenya Centre is located. The first day’s game drive was done in the late afternoon and was full of fun. Due to the generally flat and open landscape, students were able to see a lot of wildlife, including lots of lions. Students also spotted hyena and other wild animals which they had not seen in their field trips in Kimana wildlife Sanctuary. Our first encounter with a fully mature, manned male lion happened when one slowly crossed the road in front of the SFS and tour vehicles, and was spectacular. It was huge, fearless and seemed not to mind the many vehicles and tourists that had stopped around it; and the majestic walk revealed its title “King of the African Jungle”. 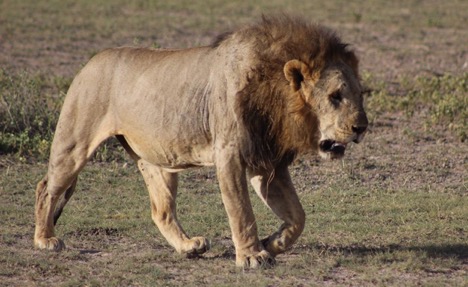 The second day game drive was very enriching and students saw many lions, spotted hyenas, and jackals. It was amazing how the Maasai herders were able to integrate with wildlife with ease as they watered their livestock in the swamps of Amboseli national Park. Avian biota was equally rich and diverse, and the flamingos were uncountable. Almost at the end of the game drive, we saw a huge python along the lake road that had just swallowed prey.

On our last day of the expedition, there was an optional early morning game drive, which gave students an opportunity to see sunrise and some of the nocturnal wildlife species. Amboseli expedition was a taster for the globally known Maasai Mara and everyone was, “Twende-Mara” (Let’s go Mara)!!!!
_______

Curious to learn a bit more about the SFS Kenya Center? Click here to read about why we’re based there, our environmental research focus, how we connect and support the local community, and even take a tour of the Center.