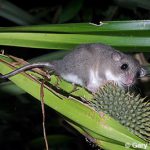 Just a few days since our Wet Semester group of students arrived and already several have seen a snake. Our common tree snakes are particularly active at present, moving speedily among the branches, and this is the species that has been glimpsed along our walking tracks. These guys mostly eat frogs and reptiles but another reasonably common species on the Centre for Rainforest Studies’ (CRS) property, the carpet python prefers furry prey.  Their diet is known to include a range of mostly terrestrial mammals including commonly observed mice, rats and bandicoots.  Recently however, a publication by a former SFS intern and associates, based on research conducted from the CRS property, has revealed a very cryptic rainforest rodent among a carpet python’s prey items. 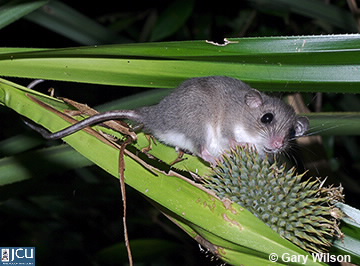 In a paper in Australian Mammalogy published this month, Jennifer Fill, a former SFS intern, and her colleagues report on a tree mouse or prehensile-tailed rat (Pogonomys sp.) found in the stomach contents of a road-killed carpet python.  The tree mouse is a cryptic rainforest species endemic to north-east Queensland and was not recorded until 1974 when a domestic cat brought one into the lodge at Lake Barrine, just a few kilometres from CRS.  Very little is known of its biology due to the difficulty of trapping live specimens; probably because it forages at night in the rainforest canopy.  The tree mouse found in the carpet python stomach was identified from a hair sample extracted from the stomach contents.  This highlights the importance of indirect survey methods, such as hairs identified from scats or stomach contents, in confirming the presence, and sometimes the population density, of species that are difficult to detect via other survey methods.

Indirect survey methods are something this semester’s students will be hearing plenty about as they learn about some of our special arboreal mammals and issues to do with their conservation. Under Associate Professor Sigrid Heise-Pavlov’s experienced eye, students will be determining the presence of yellow-bellied gliders from the cuts they make on trees as they feed on sap and some will continue working on the challenge to distinguish Lumholtz’s tree-kangaroo scat from the scat of other arboreal marsupials; a challenge that includes extracting and identifying hair.