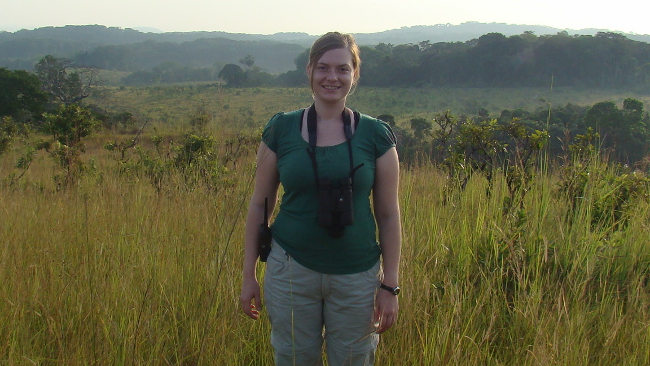 One day, as a student with SFS in Kenya, we had a guest lecture from a researcher at the Amboseli Trust for Elephants, which runs one of the longest studies of wild elephants in the world. Every elephant in the population is known, and we decided to test the researcher. An elephant happened to be in the distance, and she was able to look through her binoculars and identify the specific female out of about 1,200 elephants who made their home in Amboseli at the time. I was fascinated as she told us all about elephant behavior, biology, and conservation, and I was amazed by how intelligent and behaviorally complex these animals were.

When I went on to graduate school at the University of Missouri, I was not absolutely set on studying elephants at first, but I kept coming back to them because I found them so interesting. In the end, I chose to study African forest elephants, a distinct species from the African savanna elephants in Kenya. This species is understudied, when compared to savanna elephants, and many questions remain about their basic biology. In addition, African forest elephants are under severe threat by poachers seeking ivory. I wanted my research to have an impact on conservation, and I felt that if I could gather more information on this species, we would be better equipped to protect them in the future.

My dissertation research focused on understanding the social structure of African forest elephants using satellite telemetry, network models, and non-invasive genetic sampling from dung. I conducted field research at Lopé National Park in Gabon during two four-month periods to collect association data on forest elephants. I had to individually identify elephants, and ensure that they were correctly identified by comparing photographs of individuals against one another. This required a lot of time and attention to detail!

The primary way that I investigated sociality is through network models. Forest elephants are typically difficult to see because they live in dense forested habitats. The groups that they are observed in tend to be small; only about three individuals including calves and sub-adults, who are not independent from their mothers yet. However, there are some larger groups, and it’s possible that forest elephants maintain relationships with other individuals, but it is difficult to see all group members because they may be hidden in nearby forested vegetation.

Lopé National Park has some savanna habitats mixed in with forested habitat, making it a forest-savanna mosaic with more possibilities of observation. I searched for elephants in the park by vehicle, and when I saw individuals or groups, I stopped and took as many photos as possible. The goal was to identify each individual elephant and keep track of which elephants were associated with one another. Elephants are identified using a combination of features such as tears in their ear, tusk shape and size, ear shape, ear vein patterns, and tailbrush shape. Over time, I gathered all of the associations of the individuals and using network models, and I was able to look at the long-term patterns of elephant groupings.

So far, I have found that individual associations are larger than what is observed in those smaller groups, and that elephants are not always found with the same individuals. However, I have not found extensive connections throughout the population, meaning that many individuals never associate with each other. This differs a lot from savanna elephants, which tend to be much more connected within the larger population.

In December, I graduated with my Ph.D. I am now a postdoctoral research fellow at the University of Missouri. My days are divided between teaching and research. I am a lecturer for mammalogy and the curator of the Bird and Mammal Museum at the university. I spend a lot of my time working on writing manuscripts for publication both from my dissertation research on forest elephants and my current research on disease ecology in raccoons.

I have learned a great deal about elephants during my graduate school journey, but I have also come to understand how to pursue a career in science. I have realized that it takes perseverance and passion. There will be bumps in the road, and it takes a lot of dedication to pursue and finish your project. You have to be genuinely interested and passionate about what you study. To obtain your Ph.D., you may spend over five years focusing on single questions in a single species or ecosystem, and in order to succeed, you have to maintain excitement and curiosity about your system. My recommendation would be to choose your subject wisely!