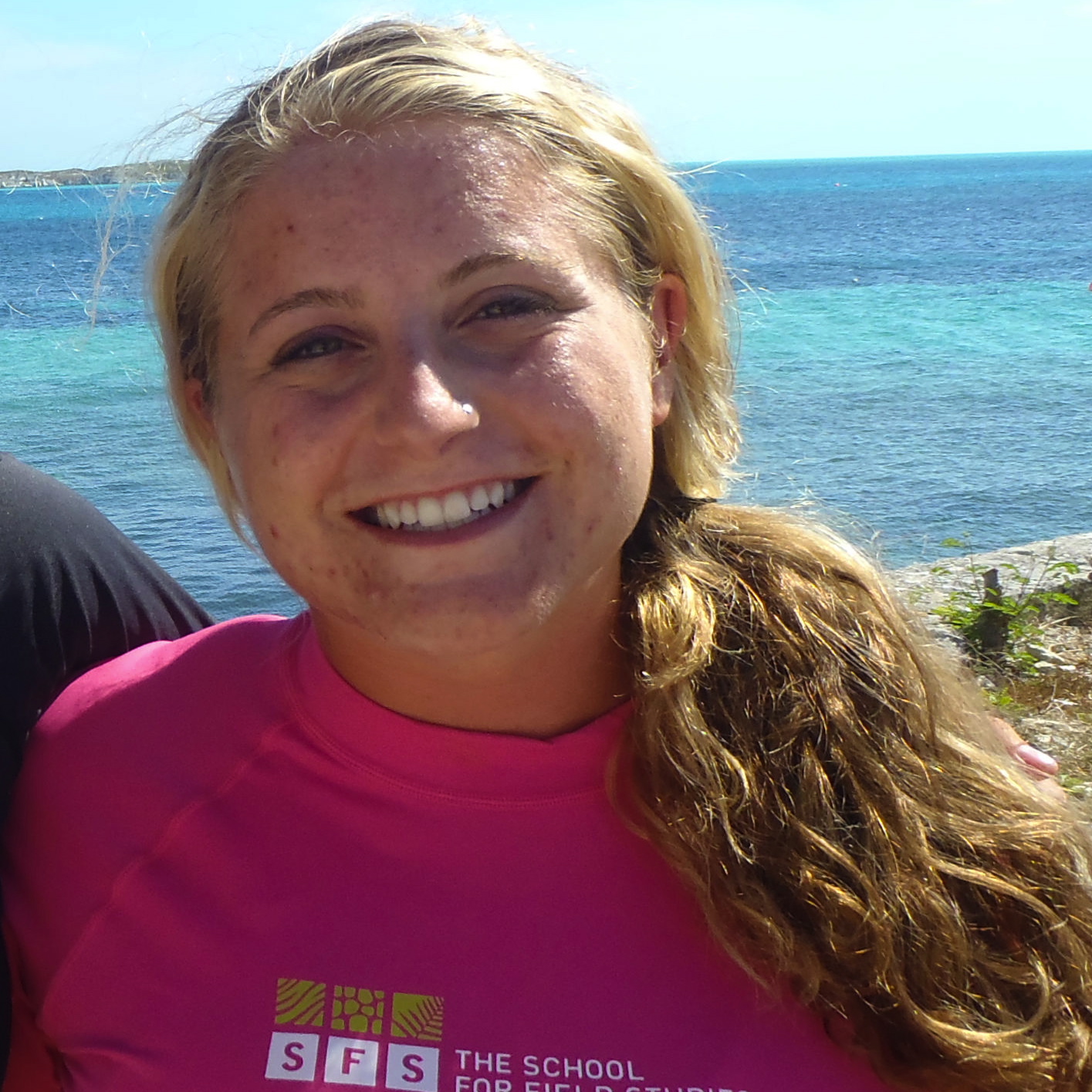 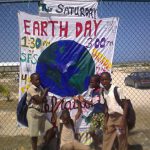 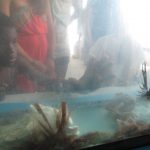 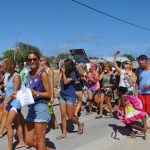 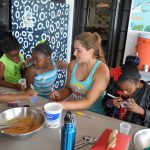 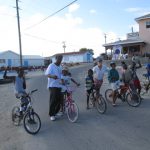 South Caicos may have never before seen an Earth Day celebration quite like the one we pulled off this past Saturday. The event was the accumulation of three weeks of hard work and planning by Kimbrough, the Student Affairs Manager, and a member of the Soroptomist women’s service organization named Beggitta. It was decided that Beggitta would supply the DJ, microphone, and the bouncy castle on the day of the event, while the Center for Marine Resource Studies (CMRS) would market the event as well as facilitate the day’s fun activities. 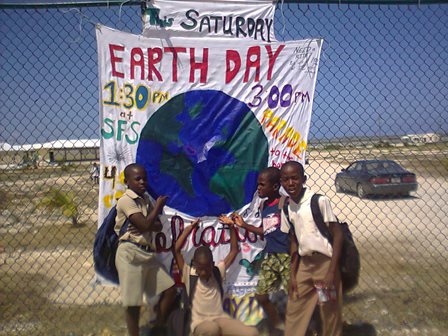 On the day of the event, the work began early for the students and staff at CMRS — setting fish traps and catching creatures while snorkeling. These organisms were featured at the special Earth Day-oriented Community Outreach. This week’s outreach had a station for a biology-based board game, edible seagrass beds, and hermit crab races, in addition to our weekly swim lessons and games. Our “Earth Squad” used this time to prepare for the parade downtown where we would continue the fun and games. The group created sashes to lead the parade and popped popcorn for the 45+ youth that were present. 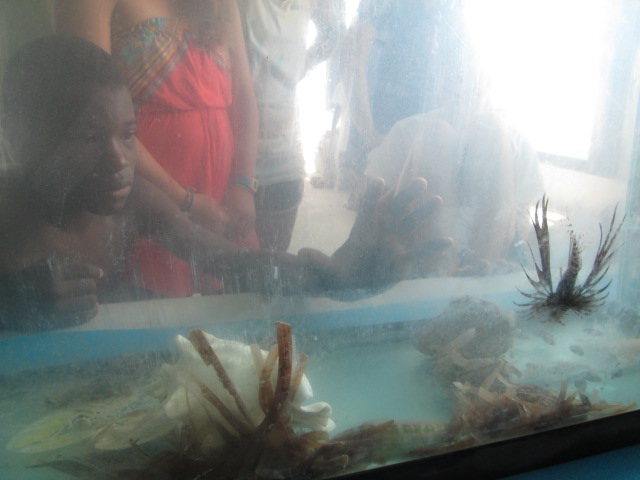 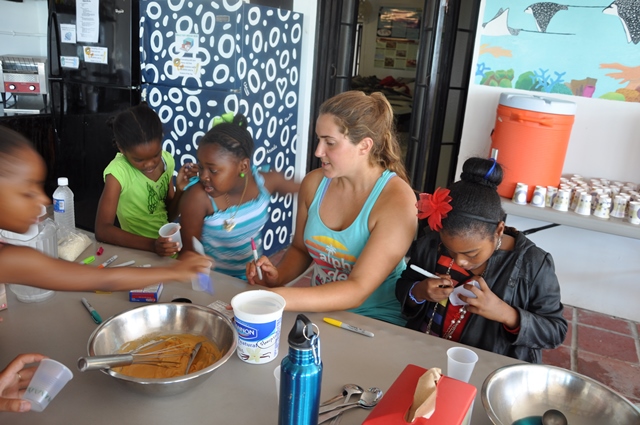 At the end of the Earth Day Community Outreach, we gathered outside to begin the parade. We had been told that the brass band from the local school was going to lead the parade downtown… but we were all surprised when the only 18-wheeler flatbed truck on South Caicos pulled into the CMRS driveway to carry the band and lead the parade. The band members ecstatically climbed onto the truck and warmed up their instruments while the crowd grew behind them. SFS students, staff, and children of all ages eagerly waited for the band to begin. The music began and the smiles were out as we all began to march along the road to downtown. Everyone was cheering and bystanders were waving as we marched and danced down the road. 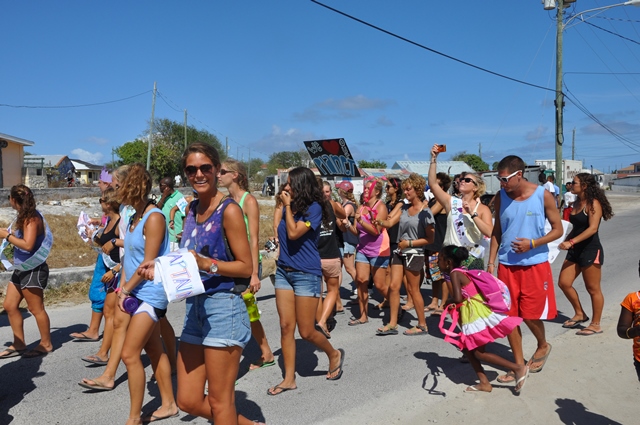 Once the parade ended, we kept the fun and energy going. The DJ had great music playing and one of our SFS students emcee Maddie led the events on microphone. The CMRS students ran skipping, jump rope, bicycle, and frozen t-shirt competitions. When not competing, the kids enjoyed tie dying, face painting, and jumping on the bouncy castle.  Even one of the local dogs, Fluffy, joined in on the bouncy castle party! As the day winded down, it was obvious that a fantastic time was had by all! Kids collected their goodies and prizes while the CMRS students happily cleaned up knowing that the celebration was a success. “It was awesome to see the hard work turn into such a big outpouring of support. My smile during the parade was so big my face hurt,” said a proud Kimbrough.

The most fulfilling part of the day was watching everyone head home with smiles on their faces and excitement in their eyes. I don’t think anyone could believe that Earth Day would have been celebrated so magnificently. It turned out to be such an exciting day full of education, hands-on learning, community togetherness, and, most importantly, fun! 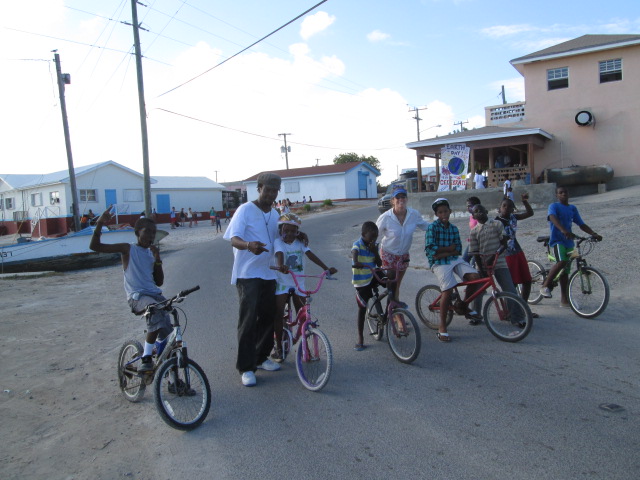