The second summer session is now in full gear. Much of the time has been spent learning field techniques. The adventures started with a visit in Lake Manyara National Park. In two days, student did independent studies on field ecology. Studies ranged from termite architecture to studying elephant behavior. At the same time, students learned how to undertake wildlife census. Students will later analyse the data that feeds into long term monitoring program for the park. Lake Manyara National Park is wonderland for nature lovers, as it offers unparalleled diversity of habitat and landscape. In the park, students saw hippopotamus, gazelles, elephants, lions, and the elusive leopards.

Students have also been learning a host of techniques that can applied in social research. We are lucky for the school to be set within a culturally-rich area. Our neighbors are the Maasai people, who are famed for having maintained their culture which is generally in harmony with nature. In the Maasai homesteads, students learned how to conduct interviews among the local people.

After an introductory class on plants sampling, student were ready for a field survey. We did a survey on the state of the grasslands outside lake Manyara National Par, and students are now able to identify the common grasses and trees here. In order to tune their tracking and nature interpretation skills, students have been studying tracks and dung for various wildlife species to know which the animals use the area outside the parks. We were also able detect a number of traps and snares used by bush meat poachers. 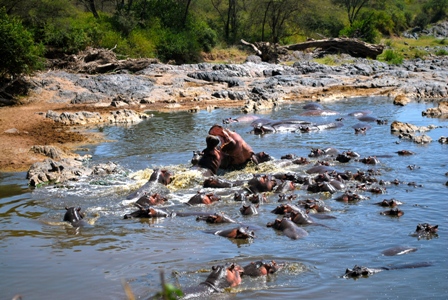