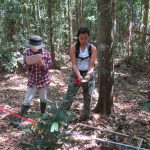 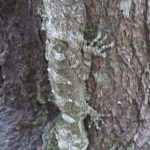 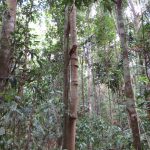 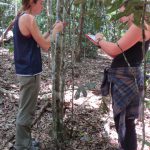 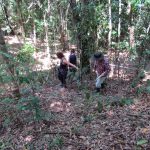 How Do Secondary Forests Develop Over Time?

Many people are familiar with the rapid loss and degradation of tropical rainforest over the last few decades in places like the Amazon, the Congo Basin, and Southeast Asia. Chief among the drivers of this forest loss are logging (both legal and illegal), clearing for palm oil plantations, clearing for large-scale agriculture and cattle grazing, clearing for subsistence agriculture, mining, and the lack of effective government regulation of such activities (and, in many countries, systemic corruption of both the government and the public service).

Perhaps less well known is the fact that many of these processes have already been played out in parts of the Wet Tropics bioregion of northeastern Australia – giving us an opportunity to study how tropical rainforests respond to such dramatic landscape-scale transformations in the long term and perhaps a “look into the future” for the tropics as a whole. 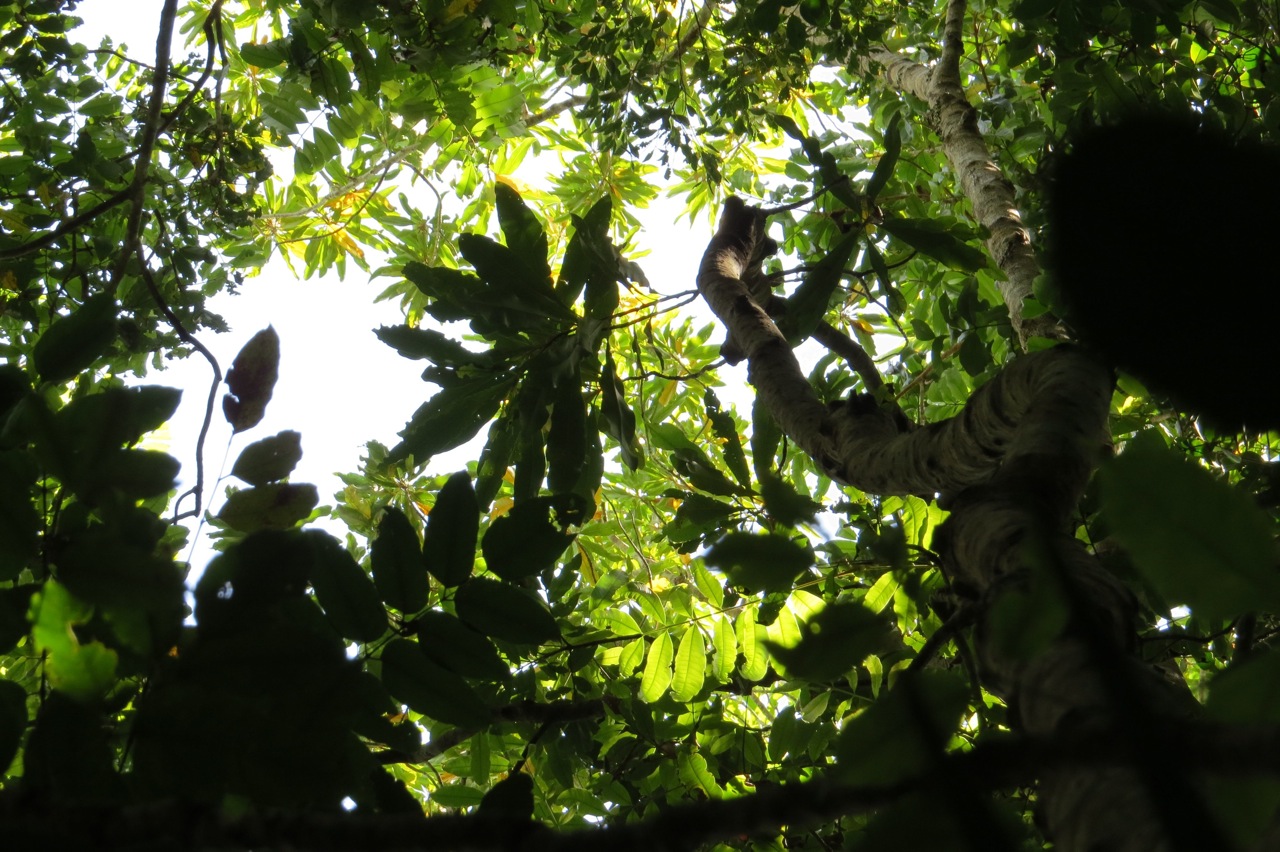 On the Atherton Tablelands, an area with relatively gentle topography and relatively fertile soils, which is also an important centre of species endemism within the Wet Tropics bioregion, logging and clearing for agriculture began in the late 1800s and were largely complete by the 1960s, although these activities continued until the declaration of the Wet Tropics World Heritage Area in 1988. As of 2000, 78% of the rainforest on the Atherton Tablelands had been cleared and much of the remaining rainforest was severely fragmented. Of the land that was cleared (~76,000 ha), approximately three quarters (~59,000 ha) had become severely degraded by the 1970s, and much of the rest of the cleared land had experienced a sharp decline in agricultural productivity, even with the use of green revolution technologies such as commercial fertilisers and pesticides.

Some of the most severely degraded (or otherwise unprofitable) lands on the Atherton Tableland have been abandoned at different times over the last century. On at least some of these lands, rainforest species have managed to establish and new, “secondary” forests have begun to develop. These forests are called “secondary forests” to distinguish them from the original “primary” rainforests that once occupied the landscape. The difference between primary and secondary rainforests, however, is more than a merely semantic one. Secondary forests often lack many of the species found in primary rainforest and, as a result, are usually poorer in the provision of the sorts of ecological goods and services that are delivered by primary rainforest (e.g., timber species, non-timber forest products, carbon sequestration, control of hydrological flows and water “storage” within the landscape, nutrient cycling and the maintenance of soil structure and fertility, etc.).

Many of the studies of secondary rainforests, however, have been performed in relatively young forests, and we do not yet know how – or even if – these forests will eventually return to the species composition (and ecological structure and function) of the original primary rainforests. Studies in the Amazon Basin and in the rainforests of the African continent, where human agricultural civilisations have a long history, have provided tantalising hints that secondary forests may be able to recover the richness and function of primary rainforests… after periods of 500–1000 years or more. There are, unfortunately, few studies spanning the gap between young (<30 years) and very old (>>500 years) secondary forests, largely because few such forests are available for study. On the Atherton Tablelands, however, we have secondary forests ranging from less than ten years old to approximately 70 years old, and thus this landscape provides one of the few opportunities to study such relatively “middle aged” secondary rainforests. 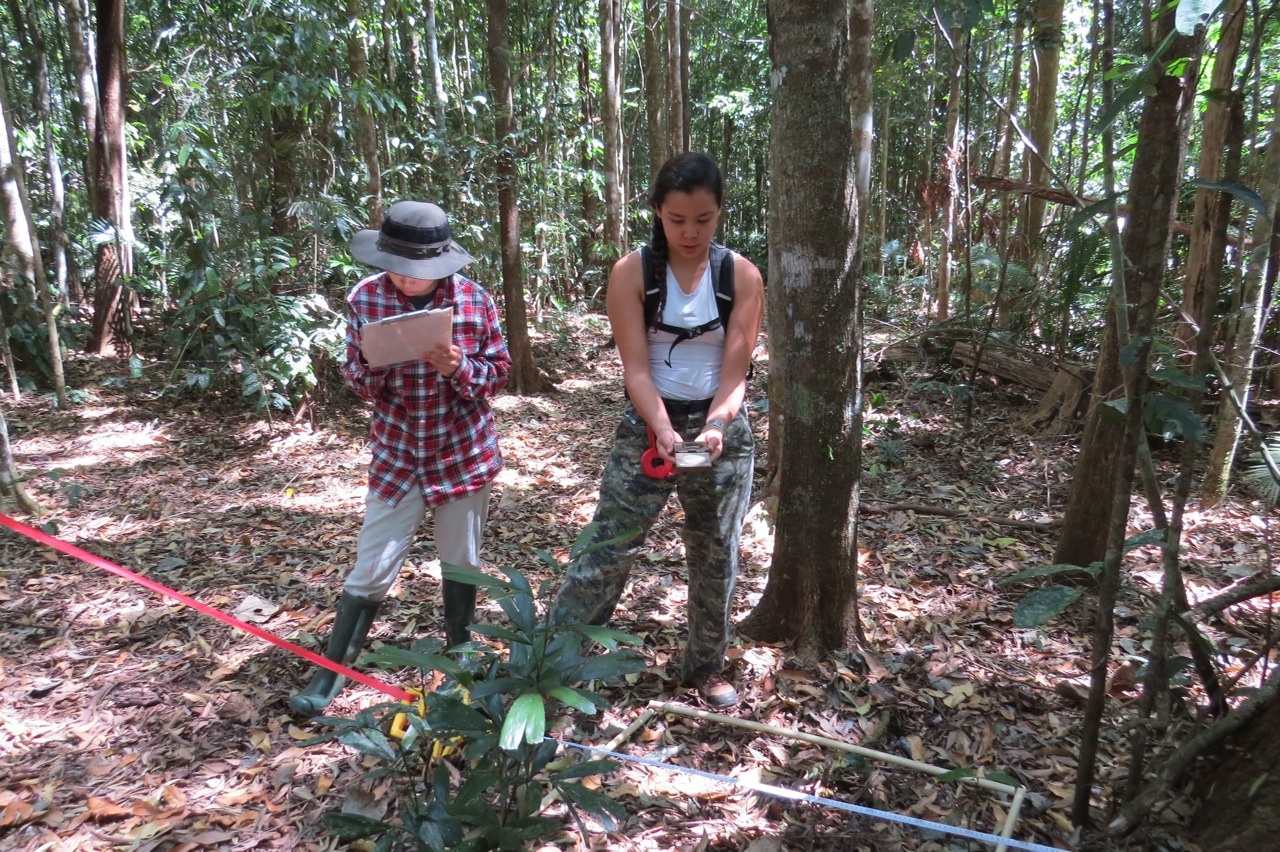 Over the last week and a half, four of our students at the Centre for Rainforest Studies in Australia have been undertaking field work to examine the processes of secondary forest development (also known as “secondary succession”) on the Atherton Tablelands. We are working in collaboration with researchers at James Cook University in Cairns to establish a chronosequence of sites across the Tablelands to allow us to study the changes that occur in secondary forests as they age. A “chronosequence” study works on the idea that you can “substitute space for time” – that is, because we are not able to study a single site over a period of 70 years or more, we instead study a large number of sites ranging in age from 0 to 70 years, in the hope that each site will have followed a similar path of secondary forest development over time and will thus present us with a picture of what an average stand of secondary forest would be doing at that age. Yes, there are some problems with this approach, but it is still the best approach we have available to us at the moment (and we intend to complement this method with others that will hopefully help us to overcome the limitations of the chronosequence approach in the future).

I think the students have enjoyed measuring the tree species composition of secondary forests of different ages on the Atherton Tablelands – they have certainly been coming up with some very interesting research questions to address in their Directed Research projects! I don’t know yet what our data will show us (why bother doing research if we already knew the answer?) but I am looking forward to seeing the results unfold – and I hope that our students will decide that it was worth dealing with all the wait-a-while thorns and cow patts in the end! 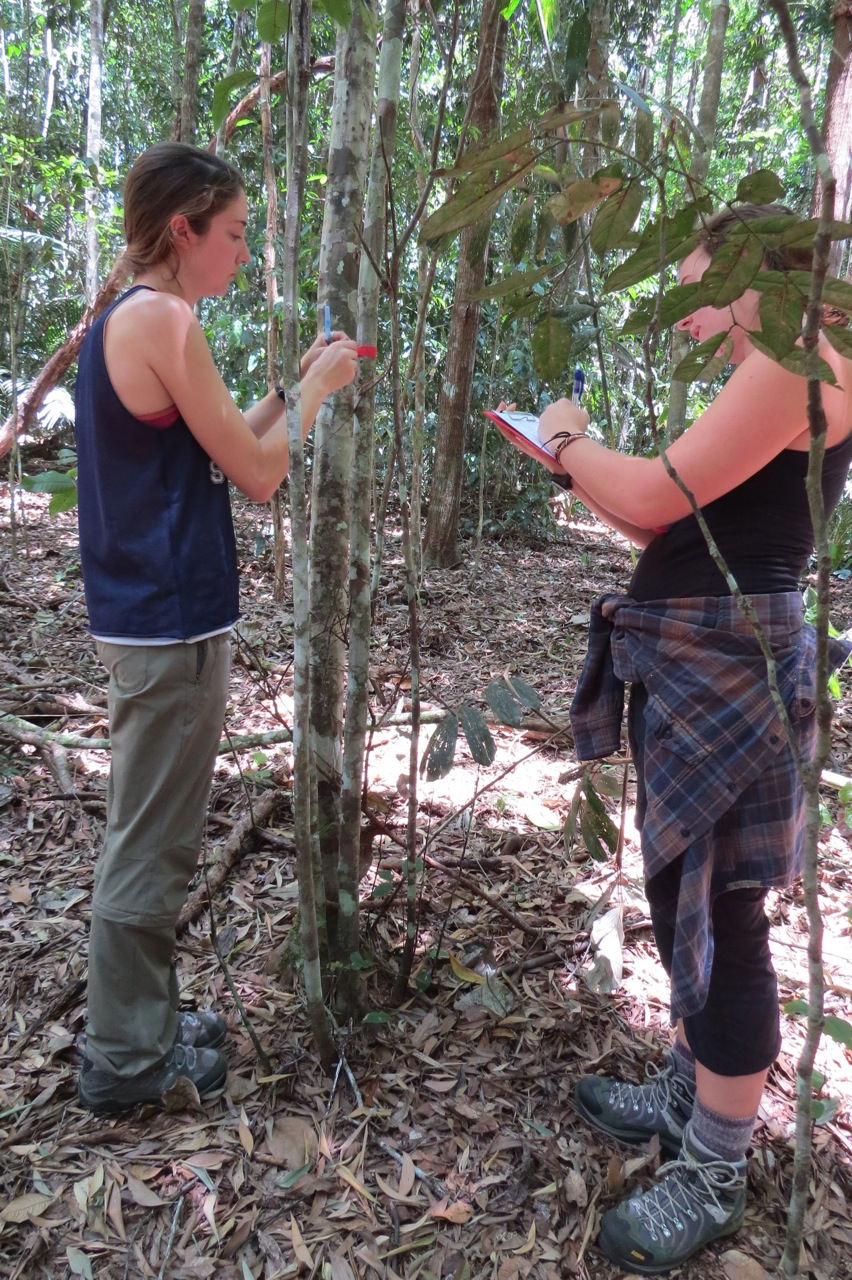 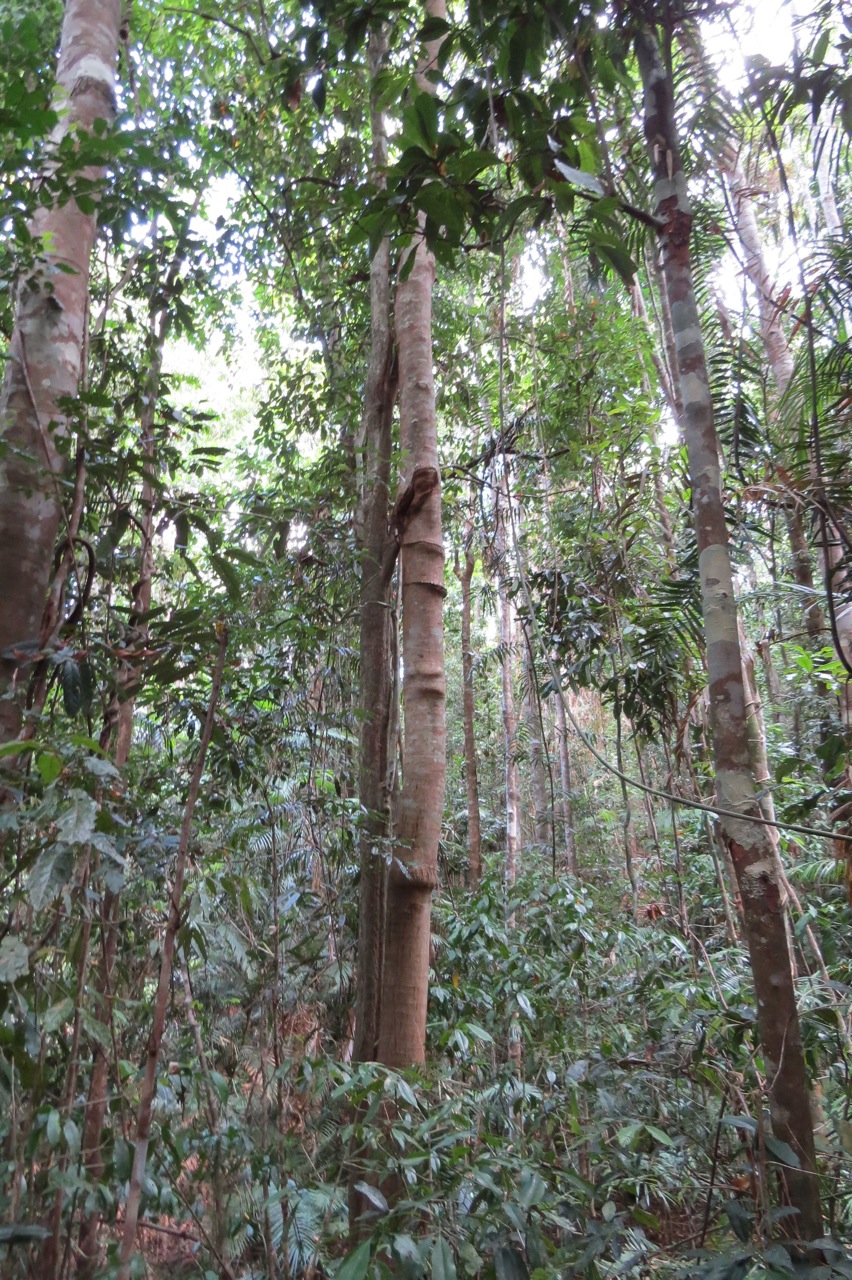 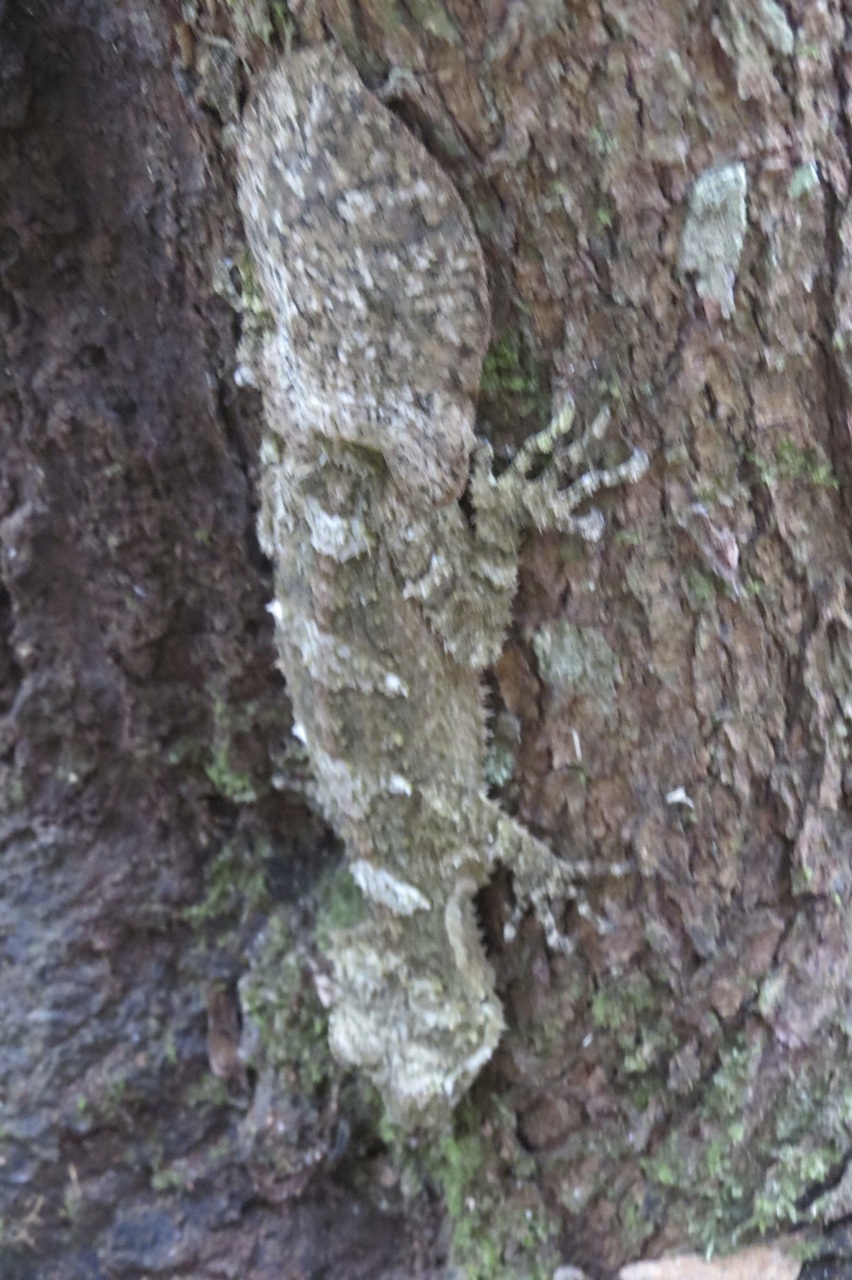 Can you spot the leaf-tailed gecko? 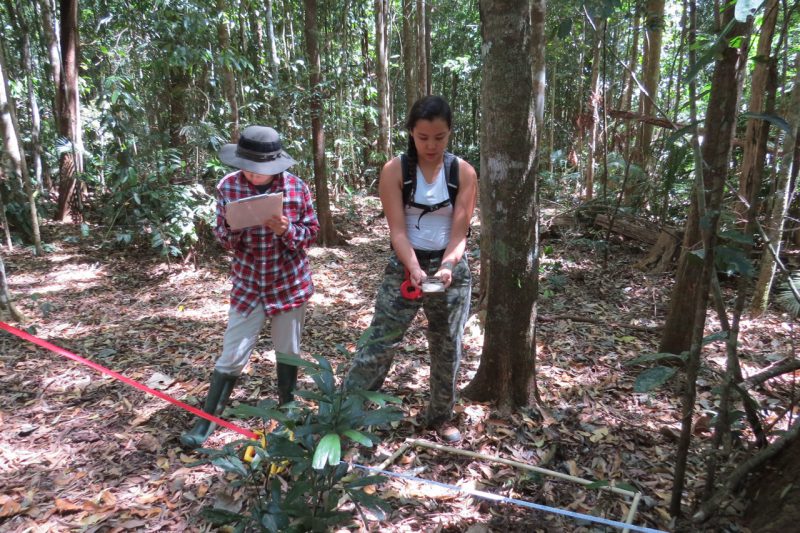 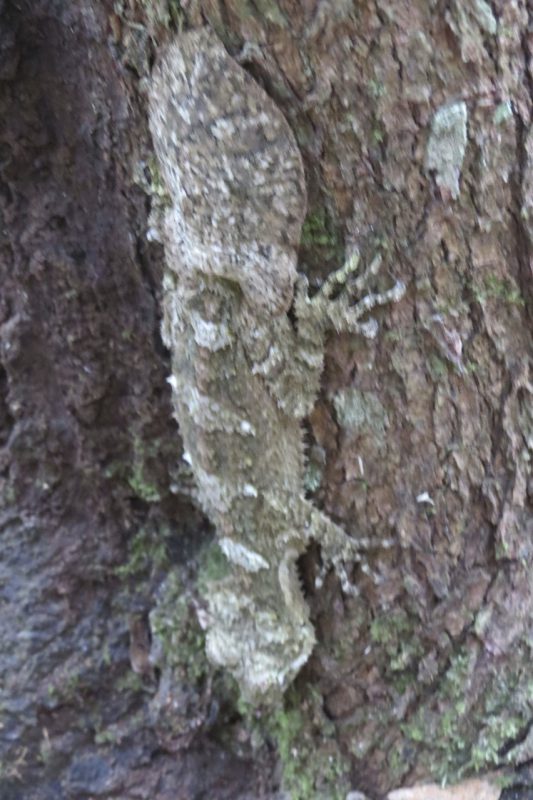 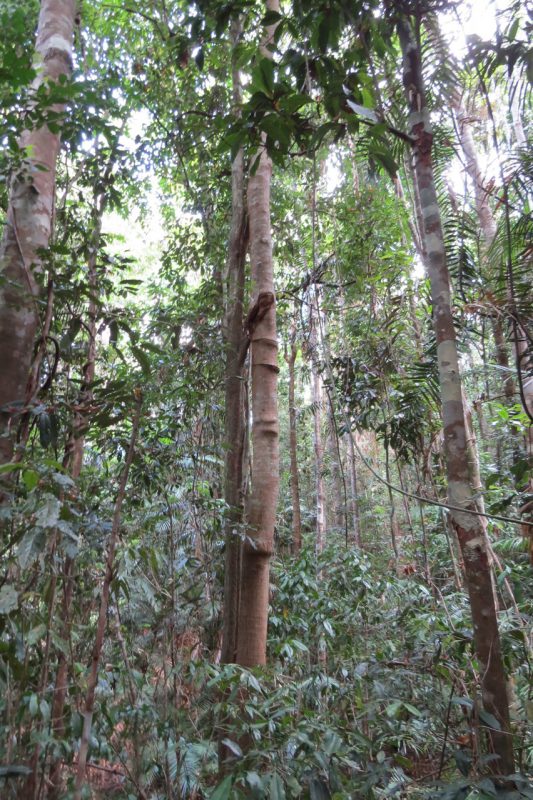 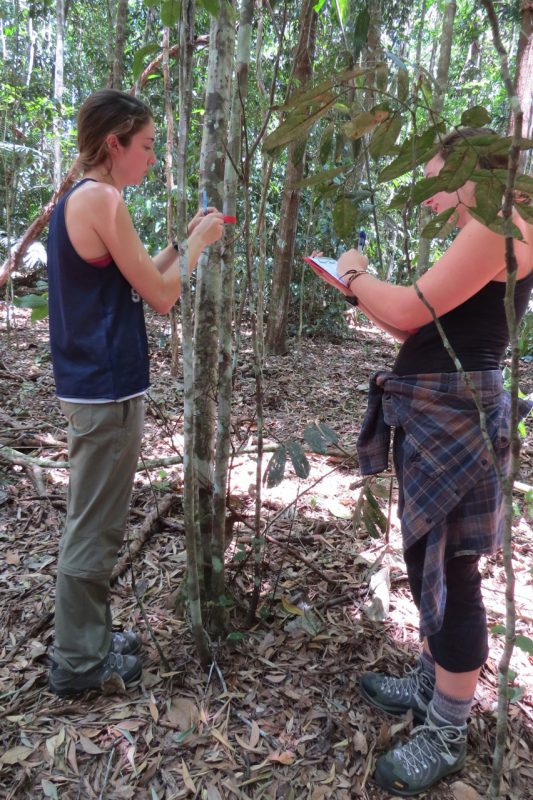 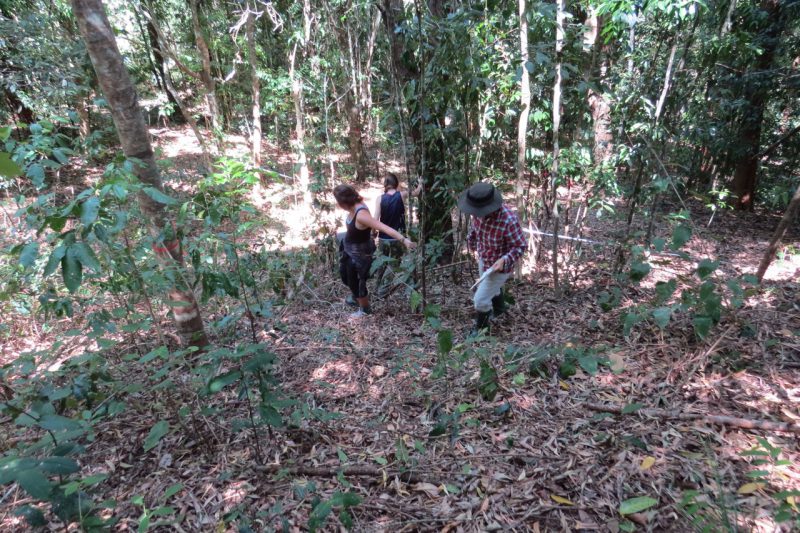