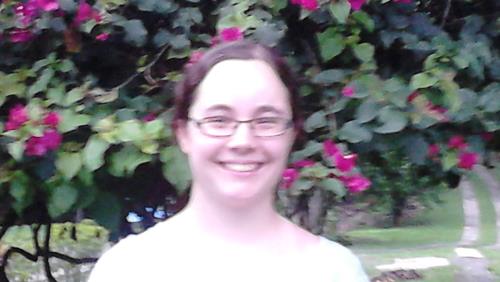 Everything in Costa Rica is Alive

Everything in Costa Rica is alive, from the tree five of us couldn’t link arms around to the speck on the floor. A café hangs sugar water in feeders to draw hummingbirds out of the forest and ends up with sixty of them, all engaged in aerial combat and collectively as loud as a small helicopter. One of them landed on my finger. It was the best moment of my life.

There are plenty of animals here at the Field Station, too. Hera, a tan dog with piercing blue eyes, cadges belly rubs while napping during the day and guards the livestock at night. Bruno, the solitary goat whose purpose here is not as precisely defined, is also incredibly friendly, with a snowy white coat and gold eyes. There’s Clara, the milk cow with a shy newborn calf and three ducklings up by the guard house, the fluffiest. They’re separated from the several dozen ducks and chickens with no personality besides the feathered caps on the top off their heads, attended by a truly terrifying goose. There’s also the gigantic flying cockroach we found beneath the couch that we intend to tame and train to carry our backpacks.

For meals we eat in the dining hall, breakfast early enough to watch the sunrise break across the mountains. This particular dinner, I was sitting across from Morgan, the intern, discussing how cute Bruno was when happily disposing of any fallen mangos we encountered. Morgan turns, brow furrowed, and opens with “you know Bruno’s dead, right?” with no more emotion than she had remarked on burritos we now were staring at with growing horror.

We didn’t actually eat Bruno. A wandering coyote had somehow gotten through the fence the night before. Hera drove it off, her barking alerting the guards. But she got there too late, and that, as they say, was all she wrote. Here in Costa Rica, everything lives. So, everything dies. Energy moves from one animal to the next, from prey to predator and predator to soil, in the cycles that have sustained the tropical forests since time immaterial. Nevertheless, Bruno will be memorialized in our group’s mural, next to the Lorax (Summer 2013) and across from the Harry Potter crest (Summer 2014). Rest in peace, buddy.