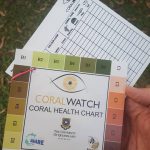 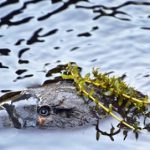 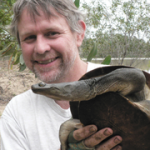 As students at the SFS Center for Rainforest Studies (CRS) look forward to their excursion to Fitzroy Island next weekend, we have been introducing the concept of citizen science. The great thing about citizen science is that not only can students contribute to environmental research during their SFS program but also later as individuals or in organisations wherever their life and career may take them. “Citizen Science” is a catch-all phrase used to describe the collection of scientific data by community volunteers. Scientists can’t be everywhere so citizen science offers researchers wider coverage, greater geographic and seasonal spread resulting in the collection of data that otherwise wouldn’t get collected. This is data that ultimately can be used to inform decision makers on how best to manage the human and natural environments.

Citizen scientists have contributed / are contributing to many research and monitoring projects worldwide such as bird atlases, shore-bird surveys, raptor counts, fungi mapping, and plant phenology to name but a few. However, not all research can make a good citizen science project. Good citizen science projects have certain characteristics in common – they are simple in design without the need for complex equipment or highly specialised identification skills on the part of volunteers. Citizen science projects also work best when they are carried out in partnership with scientific institutions, NGOs and/or management agencies who can provide overall direction and supervision while also having the specialist technical expertise that is often needed. Over the years, CRS students have been involved in some very worthwhile citizen science endeavours including community crane counts, flying fox counts, a tree-kangaroo mail-out survey and a beach stone-curlew survey.

Recently CRS has expanded its programs to include a whole of catchment / watershed view of ecosystem function and management. This approach looks at the interrelationship between geography, vegetation, water, wildlife and humans in the Wet Tropics. Implicit to this approach is the concept of “ecosystem resilience”. This is a term that is used to describe how well natural systems can cope with external negative influences such as climate change, the idea being that a healthier ecosystem is a more resilient one. In north Queensland an example of this that it is now well established is that the quality of the water coming from the land has a significant influence on the health of the Great Barrier Reef (GBR), the largest coral reef system in the world. Clearing, overgrazing, removal of riverbank vegetation, the direct addition of nutrients from intensive land use and urbanisation have all negatively impacted the “resilience” of the GBR to climate change. This decline in resilience is thought to result in the reef being more susceptible to mass bleaching events. The fourth and worst bleaching event so far happened in late 2015 / early 2016 as a result of far higher than usual water temperatures in the northern Coral Sea.

Arising out of a concern for the impact that mass coral bleaching events were having on the reef a number of research and management organisations created the citizen science project, CoralWatch. CoralWatch gets snorkelers, divers and reef walkers to systematically record changes in coral colour associated with coral bleaching. Recently the SFS Center for Rainforest Studies registered itself as a group with the CoralWatch project for the purposes of collecting systematic coral bleaching data while snorkeling at Fitzroy Island. We’ll be making a contribution to coral bleaching data while seeing first-hand how catchment and coastal management have significant downstream effects. 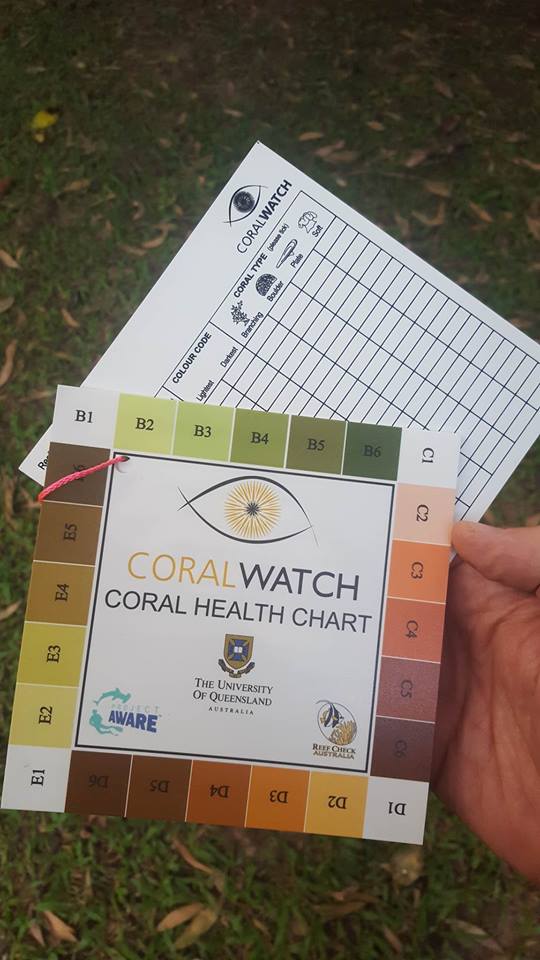 A close-up shot of the user-friendly CoralWatch Coral Health Chart that students will be using to collect data on Fitzroy Island. Photo credit: Greg Francois 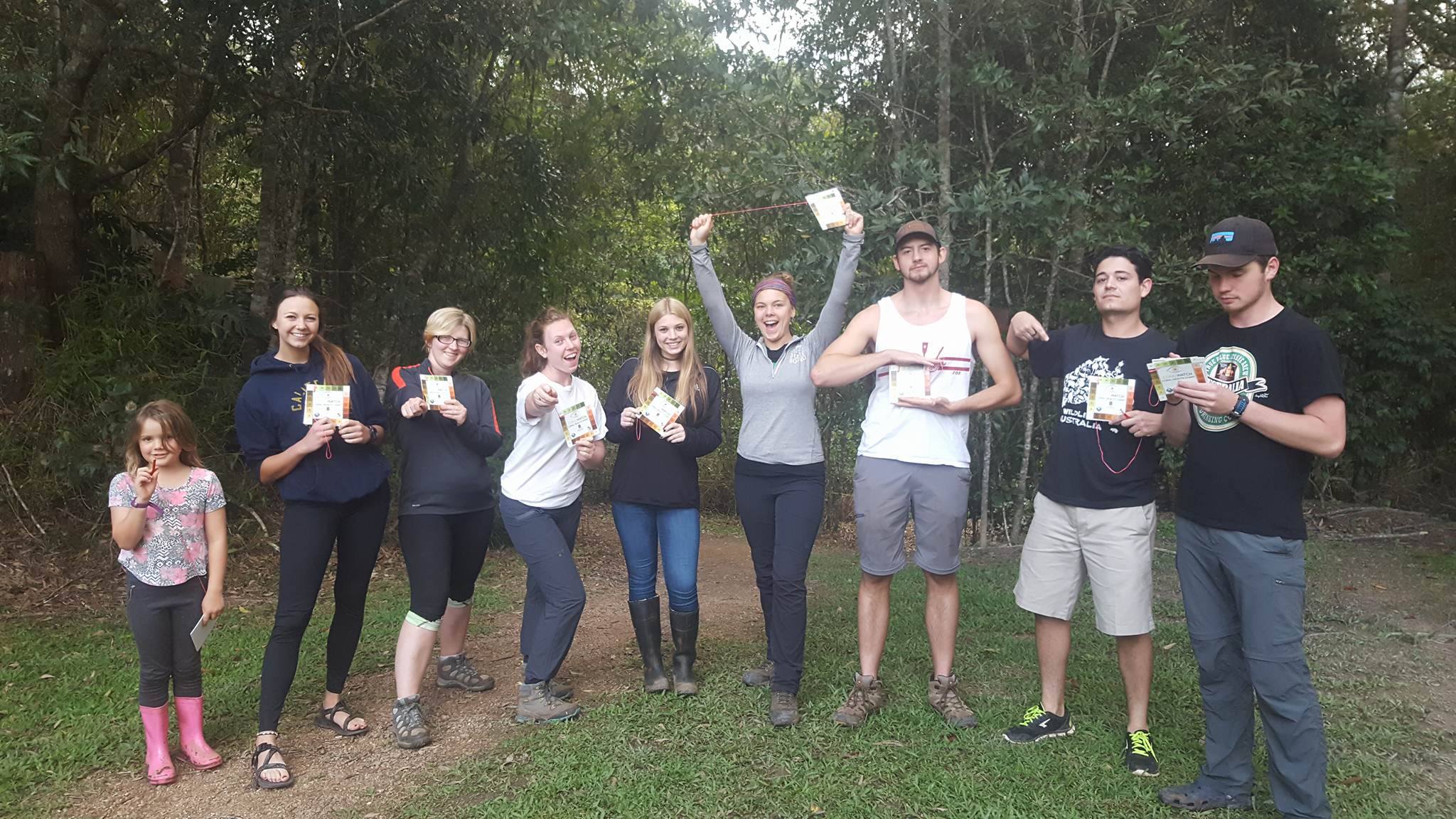 In a similar vein but on a very different project, students during the current summer course will be participating in another citizen science project. This time they’ll be counting and recording the location of platypus, very much at the top of the catchment. Platypus, of course, are one of only two types of egg laying mammal (or monotreme) in the world (the other being the spiny echidna). In the Wet Tropics, the Atherton Tablelands is known as a bit of a “hot spot” for this unique riverine animal which occurs in many waterways and dams in the region. Fears of a decline in Queensland’s platypus populations recently encouraged the conservation group Wildlife Queensland to launch only the second state-wide survey of this elusive animal. Platypus Watch involves surveyors taking to the banks of their local waterways to look for and hopefully record platypus sightings. Next week, for PlatyCount 2016, students will be up before dawn to count platypus on Peterson creek a small waterway at the very top of the Barron River which ultimately flows out on to the Great Barrier Reef.

Both CoralWatch and PlatyCount are examples of two very different citizen science projects fundamentally connected by catchment water quality. The health of Wet Tropics catchments is ultimately important to both the health of platypus and coral – two very different organisms sharing some of the same problems and both being helped by citizen science.

For more information on the Citizen Science projects that our students are contributing to, please visit:
www.coralwatch.org
www.platycount.org.au 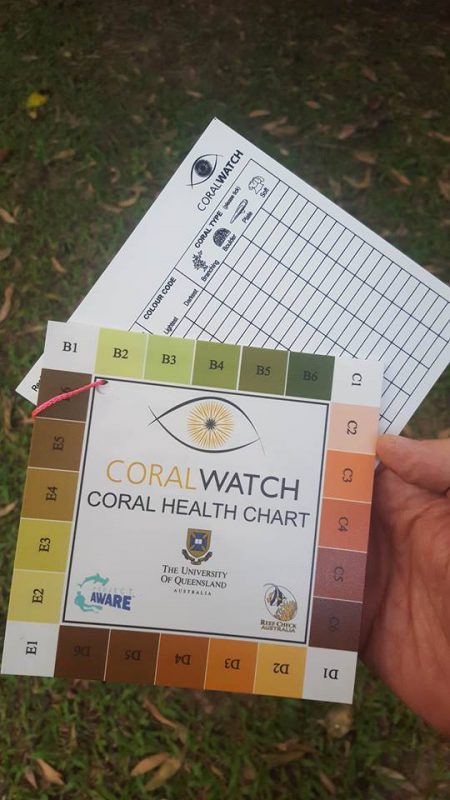 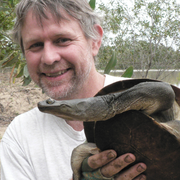