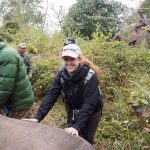 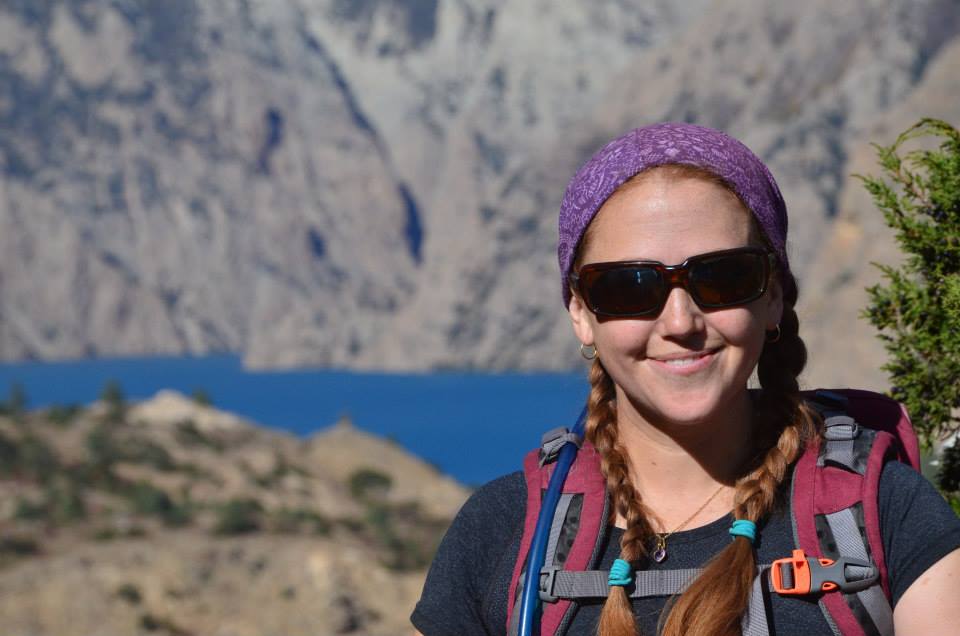 Why did you choose SFS as a study abroad program?
I wasn’t planning on studying abroad at all. I’d grown up overseas so didn’t feel I really needed the “international experience” and I was on a pre-vet track, which meant there were very few programs that offered the transferable science credits I would need to meet all the requirements. However, on the night of the study abroad fair on campus, I was hosting a prospective student and I offered to take her on a tour. When we reached the campus center, we popped into the fair for a few minutes. I will never forget turning the corner and seeing the big display with the photo of the giraffes silhouetted against the setting sun. I chatted with the SFS rep, and looked through the brochure and was immediately drawn to the Kenya program. Not only did it offer transferable science credits so I could still stay on the pre-vet track, the course description was exactly what I wanted to do with my life!

Reflecting back on your time in the program, what did you gain from your SFS experience?
SO much!!! One of the most critical things I gained was an understanding of all the different career paths open to me. I had always been passionate about conservation, but only knew two ways I could pursue it – through research (PhD route) or, if I wanted to be hands on with wildlife, as a veterinarian (although I knew the chances of actually getting to work with wildlife were minuscule). Through the program I had the chance to meet so many people working on conservation from so many different walks of life! Sure there were vets and researchers, but there were also experts working for the big donors, such as the US government or World Bank, there were folks working for International NGOs, the UN, and local groups, and even diplomats engaged in conservation work. I also learned there were so many different ways to work on conservation, whether that be through fund-raising, community engagement, policy interaction, law enforcement, or park management. When I returned to my college I started to research graduate programs that would get me where I wanted to be, and discovered there were actually a lot!

What is your most profound or lasting memory from your SFS program?
There are many striking memories, but one of the most important was of sitting up on top of a huge outcropping of rocks listening to a lecture from one of our professors. He used the whole landscape behind him as his prop – no need for maps or PowerPoint when you could just point to the feature you are talking about! That perspective helped me see how everything is interconnected, and helped lead me into my later focus on Conservation Ecology – a discipline where you try to understand the bigger picture and how everything fits together with an eye to how best to conserve your target species or ecosystem.

What advice would you give to a prospective SFS student?
GO FOR IT!! The program will challenge you and shape you, and you will never be the same again… but you will never look back!

What do you do for work?
I am a Foreign Service Officer with the United States Agency for International Development. USAID is the lead U.S. Government agency that works to end extreme global poverty and enable resilient, democratic societies to realize their potential. USAID carries out U.S. foreign policy by promoting broad-scale human progress at the same time it expands stable, free societies, creates markets and trade partners for the United States, and fosters good will abroad. USAID works in many sectors, including health, agriculture, democracy and governance, education, and environment. USAID’s environment programming covers a wide swath of issues from environmental compliance (making sure our other projects do not have negative environmental or social impacts), to urban planning, to water management, to energy production, to forestry, to climate change mitigation and adaptation, to biodiversity conservation.

As a USAID Environment Officer, I am the technical lead responsible for designing and managing programming that addresses these issues. I just left Nepal, where I was the Environment Team Leader, and am currently the Natural Resource Management and Water Team Leader for USAID/Tanzania. I lead a staff of four other technical experts in climate change, water sanitation and hygiene, community conservation, and wildlife trafficking to manage a series of activities that aim to help Tanzania better manage their natural resources, including wildlife, forests, and water to the greater benefit of the Tanzania people and the preservation of those resources for future generations. 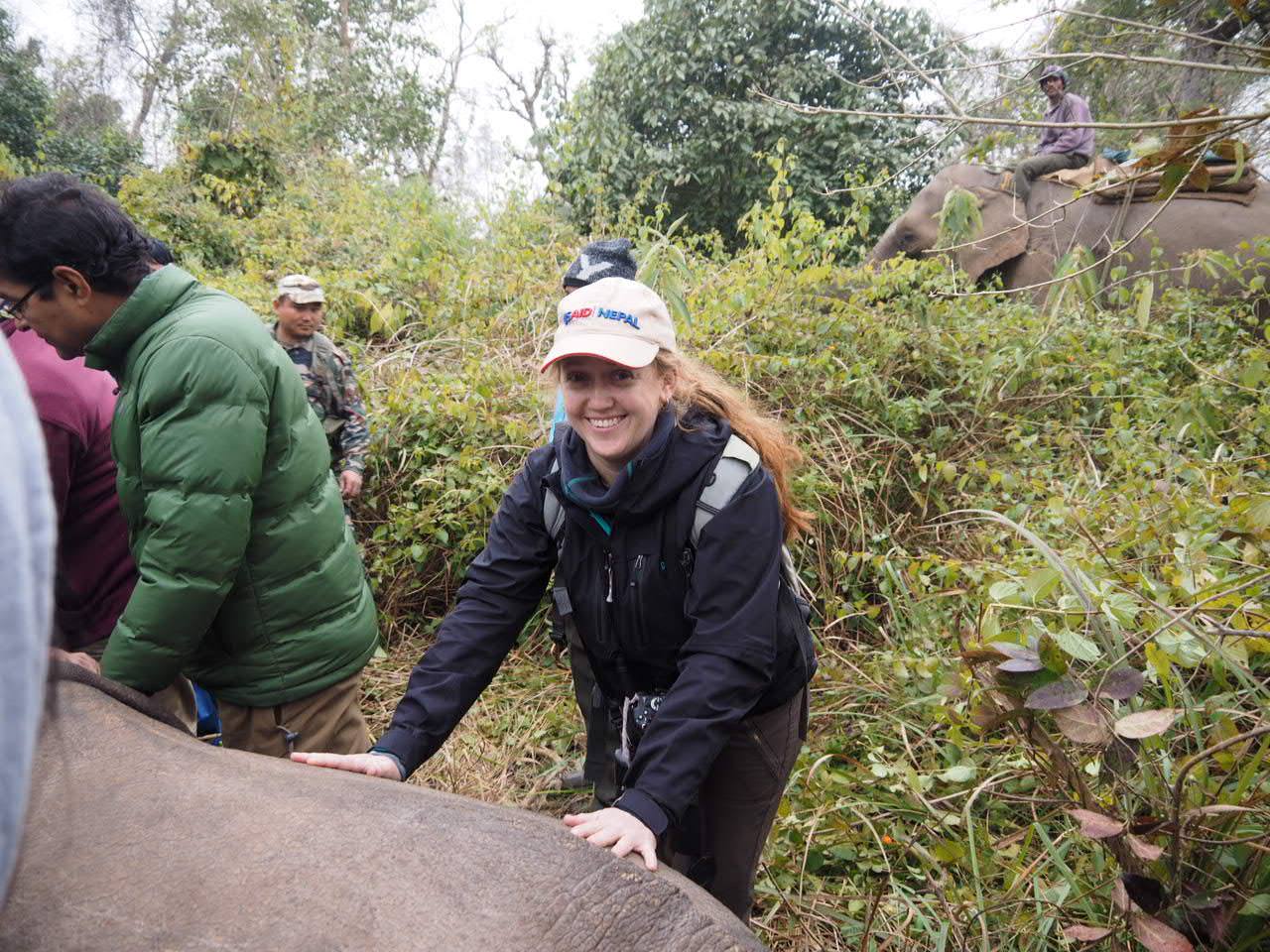 What does that actually entail on a daily basis?
Generally speaking, a lot of emailing, meetings, and report writing! As a steward of taxpayer dollars I spend a lot of my time ensuring that our money is being used efficiently and effectively, and reporting back to congress what is happening.

Of course, to do that well, I do have to get out to the field regularly to see first-hand what is happening on the ground! All the tedious meetings and hours on the computer become worth it when you are riding on the back of an elephant to see a grassland restoration project in Nepal and almost literally stumble over a tiger. Or you get to participate in an exercise to put satellite collars on Rhinos.Or you talk to a group of women in a marginalized community who are now making five times their previous annual salary through an activity that is also helping restore hundreds of hectares of forest. I also get to fund cutting-edge research, such as using DNA to track tigers, and meet with top scientists and explorers to learn what they are doing and see how we can include it in our programming.

Some people would prefer to be the researcher, or the person on the ground implementing the project, but I love having my bird’s eye view of the issues (going back to my memory of the lecture at SFS!). I have the opportunity to see the whole system, and work with local policy makers, implementers, and other donors, like other Embassies or the UN, to decide the strategic direction for conservation in the country, and potentially identify and fill important gaps. Designing the next generation of projects is probably my favorite part of the job.

Describe an interesting project you’ve worked on in your career.
In Nepal, USAID’s biggest project is called “Hariyo Ban”, which means “Green Forest” in Nepali. It covers an enormous swath of the country, including two landscapes: the Terai – the flat plains at the foot of the Himalayas where the rhinos and tigers live, and the Kali Gandaki River basin – which connects the high Himalayas to the Terai. Hariyo Ban has a budget of nearly $50 million USD ($40 million from USAID and $10 million in matching funds) over 5 years.

Climate change is an enormous problem in Nepal, where the effects are visible and tangible. Within the Kali Gandaki basin you have the dual problems of glaciers disappearing, leaving mountain communities without access to water, and increased flooding from changing Monsoon patterns in the lowlands. Compounding all this is steadily rising temperatures, driving species up stream in search of cooler climates. Unfortunately the Kali Gandaki has not been historically managed to help facilitate connectivity between protected areas, and there are lots of gaps in the forest. Also, the poorest of the poor – landless marginalized groups – are almost entirely reliant on the forest for survival, and their few other livelihoods options are extremely vulnerable to climate change.

Enter Hariyo Ban. One of the virtues of having a large project is that you can take a comprehensive look at a landscape, even one as vast as the Kali Gandaki Basin. They identified areas where there were bottlenecks to biodiversity connectivity as well as where the most vulnerable people lived. Not surprisingly most of these are the same areas! There they work with Nepali Government Officials, community forest user groups, local decision makers, and the poor themselves to find ways to regrow forest, pull people out of poverty, and improve local community access and management of forest resources. It sounds like a tall order, but they have been extremely successful!

Did your SFS experience contribute to where you ended up?
Absolutely! I didn’t have a clear understanding of what my options were for working in international conservation before Kenya. My time at SFS really opened my eyes to what I could do, and how, and led me to pursue my Masters of Environmental Management.

It also more directly led to me getting my first job with World Wildlife Fund – my on-the-ground experience in East Africa was considered a major plus to the hiring committee. After my first Washington DC based WWF contract ended I got another offer to work on the Coastal East Africa initiative, a project that covered Kenya, Tanzania and Mozambique. Again, the fact that I had lived in Kenya previously was a huge help in convincing my bosses that I was up for the job.

The WWF experiences paved the way for me to join USAID, so you could say I first stepped foot on my path to being a diplomat when I stepped off that plane in Kenya!

Are you professionally connected to other SFS folk?
Yes! At my first job at WWF, there were a number of people who had attended different SFS sessions, and I’ve also run into a few within USAID. I’m also connected to all of my SFS classmates, and they are all doing amazing things – many directly linked to their time in Kenya.

What advice do you have for other SFS alumni looking to get into your field? What do you wish someone told you?
I took a fairly straight path from SFS to where I am now. I didn’t take a break between undergrad and grad school, and my career since grad school has steadily built until here. If I could do it again, I probably wouldn’t change anything in terms of what I studied, but I might have taken a bit more time. Peace Corps would have been a fantastic option post undergrad to get more international experience, and to take a bit of a mental break from academia.

My other piece of advice is that the Masters of Environmental Management degree that I got at Duke (and there are many similar programs around the country) is really perfect for this kind of work. While you study a lot of hard science as part of the degree, the purpose is not to pursue the science yourself, but to be able to understand it and interpret it for decision and policy makers. You also, in turn, learn how to understand policy and interpret it for practitioners. This skill is extremely valuable whether you work for an NGO, a government organization, or a company, either in the US or overseas.

Note: The contents of this blog are the responsibility of Bronwyn Llewellyn and do not necessarily reflect the views of USAID or the United States Government. 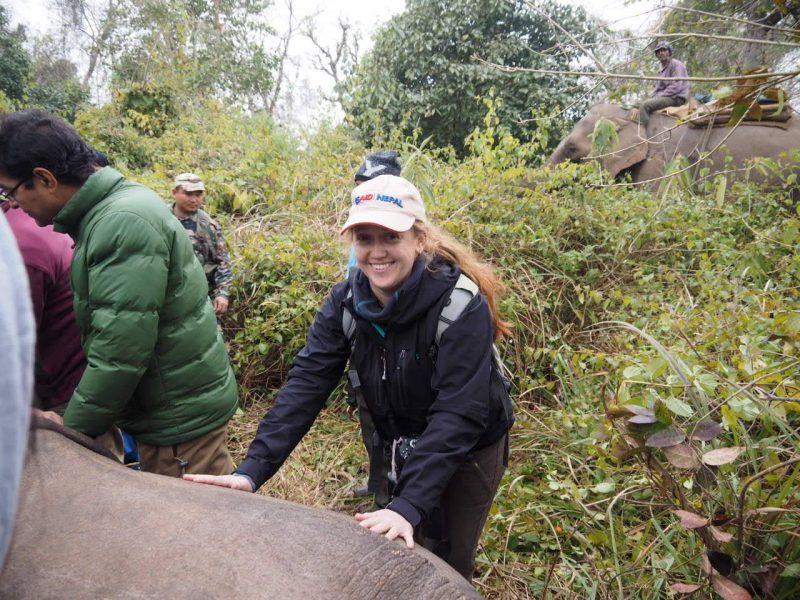