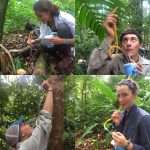 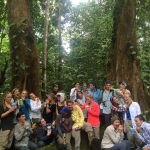 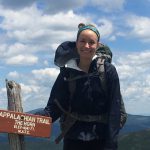 Sound Bites from the Field in Panama

Recently, SFS Panama students and staff traveled to the mainland to explore a section of rainforest. The primary mission: Collect insects. By this time in the semester, the students had already gained quite a bit of experience catching poison dart frogs with their hands for surveys of size and sex. The insect collecting, however, was not being carried out by hand, but rather with aspirators. Insect aspirators are a common tool for insect collection, and the students constructed their own aspirators a few days before using empty yogurt containers from the kitchen, two pieces of tubing and a small piece of gauze. The two pieces of tubing were pushed through the lid of the yogurt container and the gauze was taped over the end of one of the pieces of tubing inside of the container. The students were then able to place the end of the open tubing near a small insect and, by sucking on the other piece of tubing, pull the insect through the tubing and into their container.

When we arrived to the mainland, we scrambled off the boats, carried out a frog survey and took a lunch break. After lunch, Leo, our Resident Lecturer in Natural Resource Management (and insect enthusiast), assigned pairs of students to search for insects in different parts of the forest. The search teams were assigned to leaves, buttresses, and tree trunks, with one pair on aerial duty using a butterfly net. We walked down the trail until we arrived at the collection site where Leo briefed the group in the midst of the enormous buttress roots of two trees. 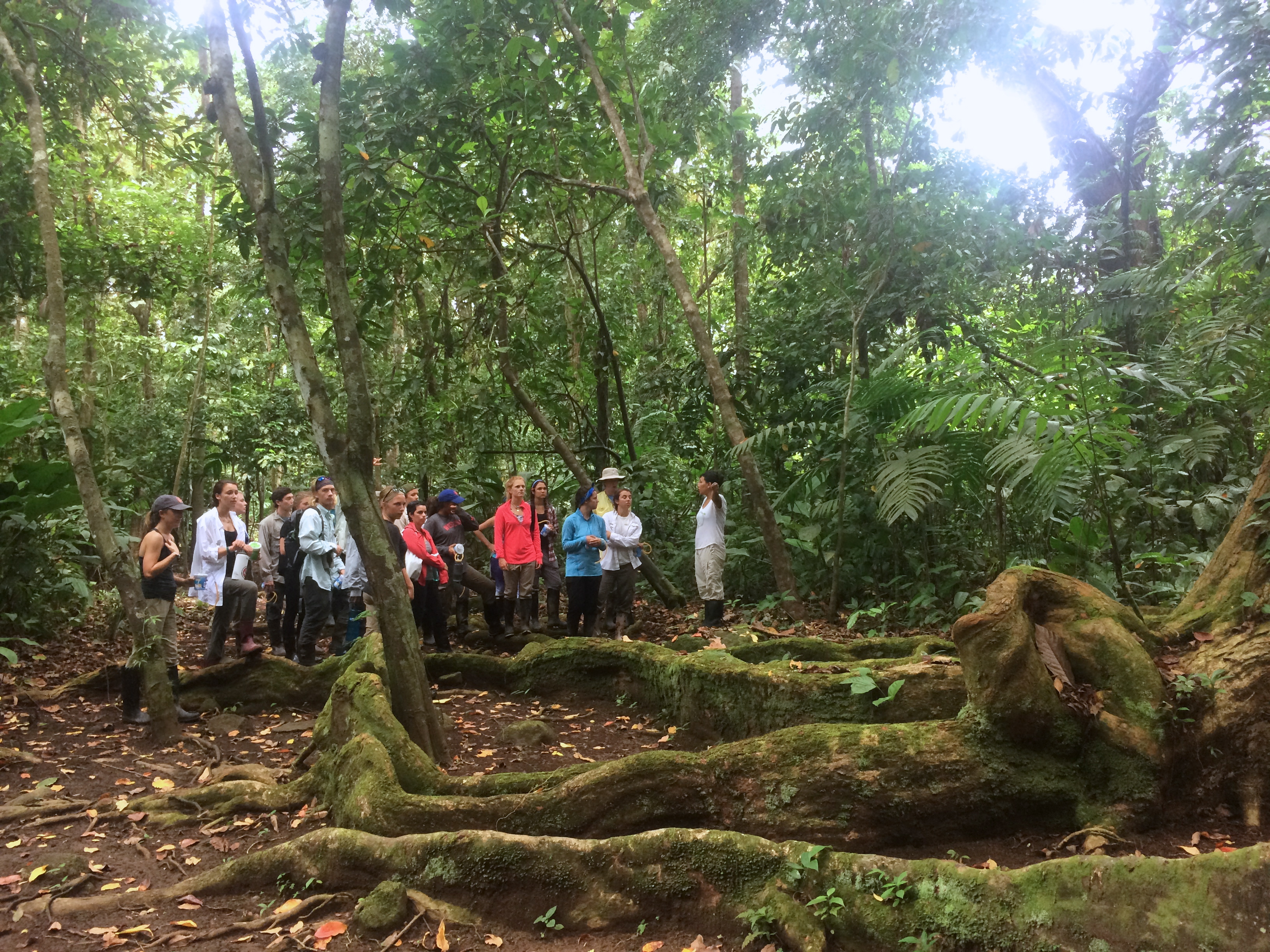 Leo answered any last questions, and, finally, it was time to aspirate! The students set out looking high and low, in cracks and crevices for any insect they could find. Initial excitement changed to resigned determination as some students realized their task was not as easy as anticipated because, in fact, insects were not lined up on the leaves and tree trunks waiting for the students to arrive. I heard a few sighs of frustration and mumblings of “we can’t find anything” before patience arrived, searches deepened and the atmosphere of the search changed. The forest soon filled with exclamations of discovery, cooperative exchanges between partners, and the occasional disappointment at the escape of a highly sought-after insect. I floated from group to group, enjoying the energy and investment that the students were bringing to the activity, along with all of the excited (and often humorous) interjections I was hearing. The following are some sound bites from the collection period:

Guys who’s doing leaves?
We are!
I have a bug for you! It’s some kind of beetle! 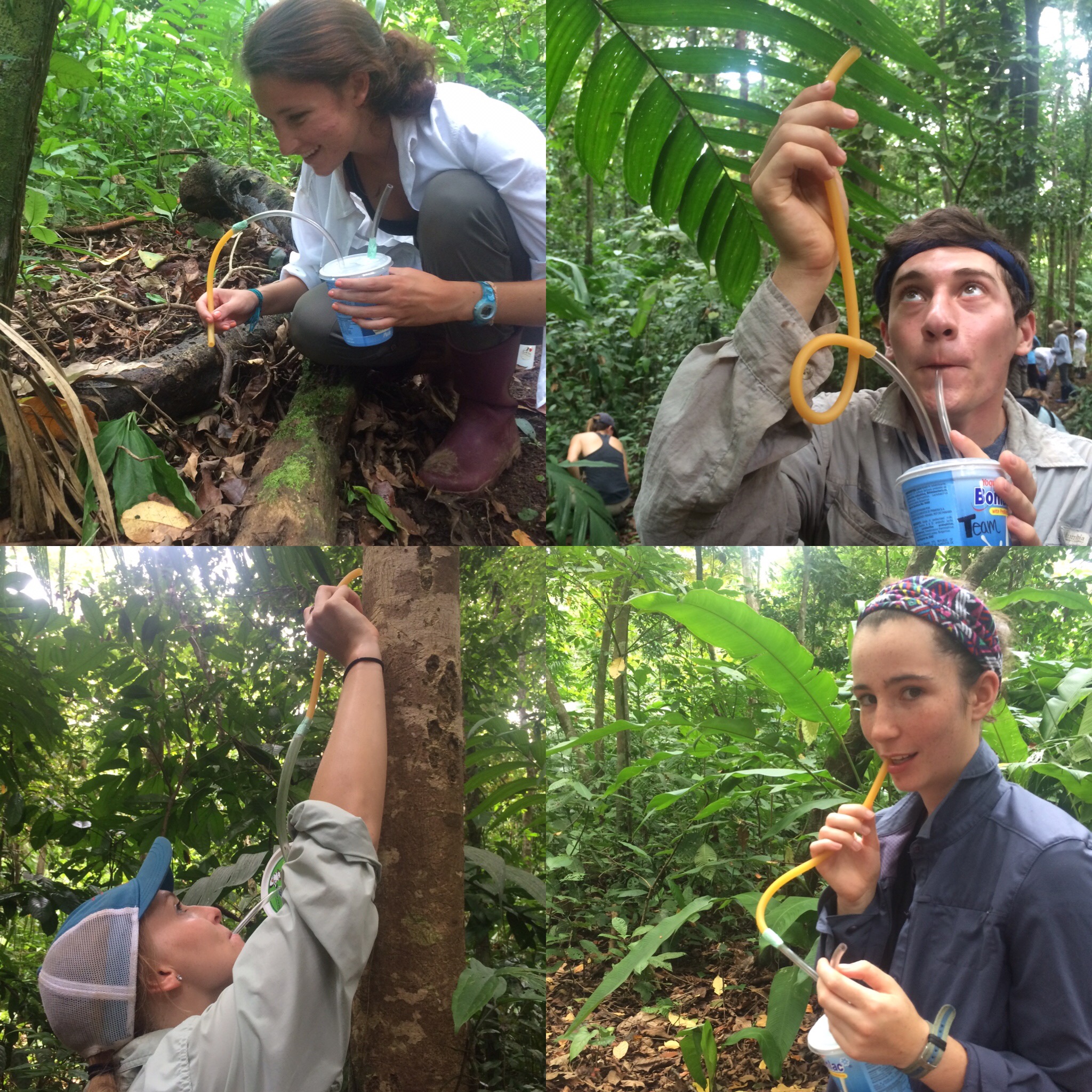 Yes! We did it! Open the aspirator!

I knew this buttress was good luck.

Meghan! Look at all the mushrooms on this tree!
(Meghan is the known mushroom enthusiast in the group)

We’re on the prowl. 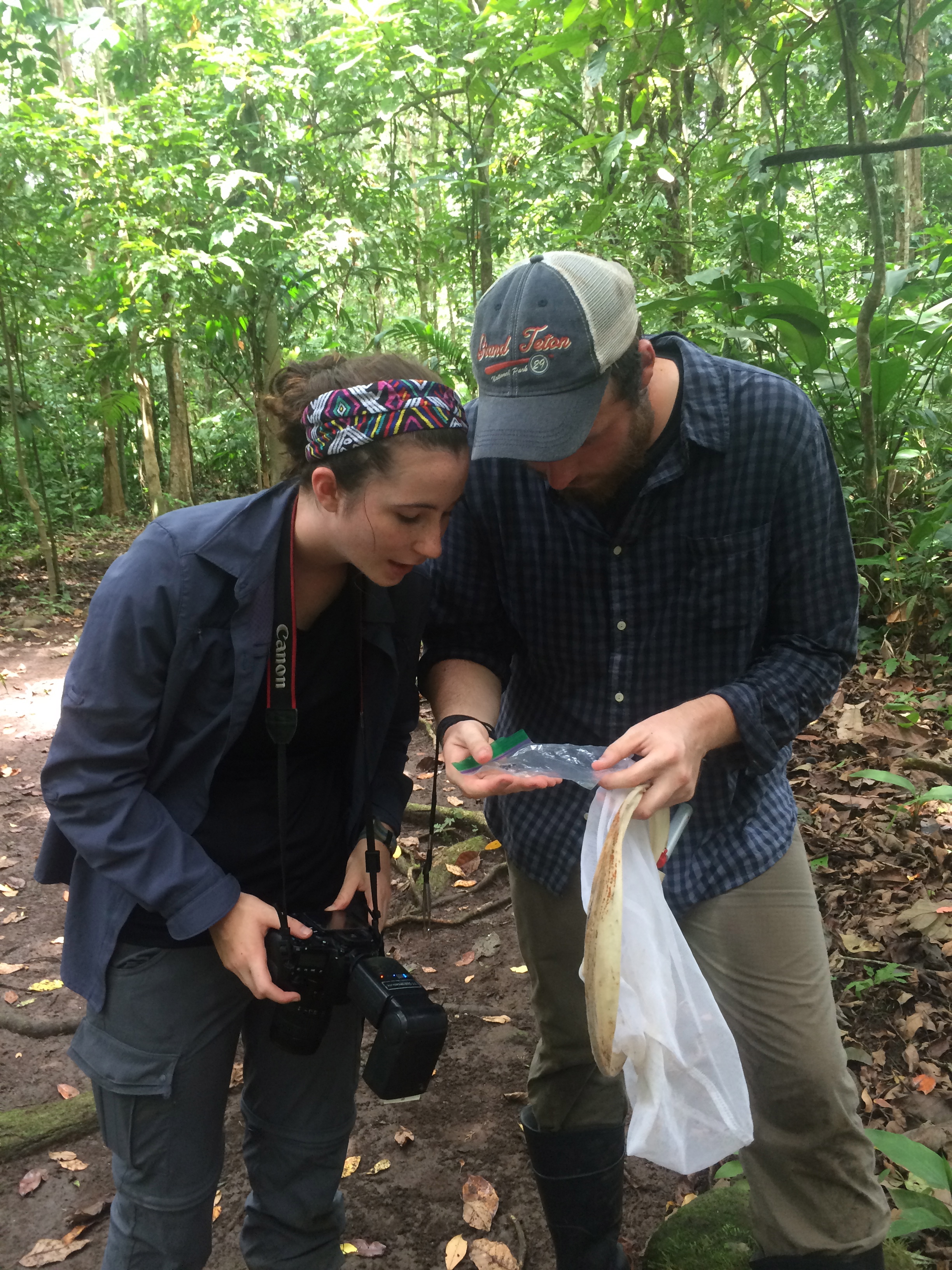 We lost him. (In reference to an insect that got away)

Here, drink some water, you’re sweating a lot.
Thanks mom. Mom points!
(A compassionate exchange between one partner pair)

Hey Leo!
Leo!
Hey Leo!
(Leo is frequently called for in the forest, usually for her assistance in identification or just because the students know that she loves to see anything that they find)

I won’t lie, I could really go for some cacao right now.
(Charlotte said as she reminisced on our trip to a cacao farm the week before, where we ate cacao fruit as we walked the grounds) 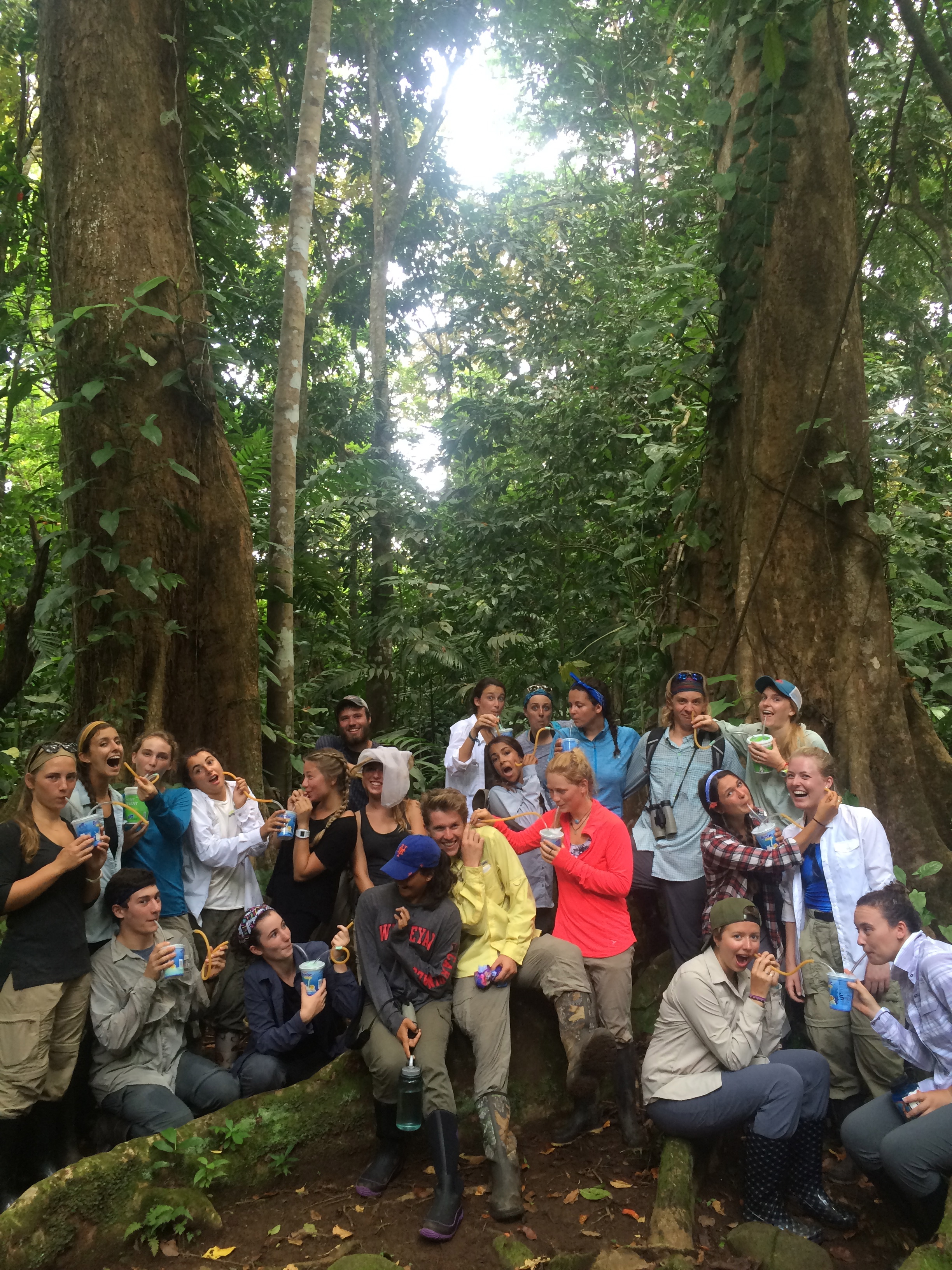 With the announcement that we had run overtime in the midst of the insect-finding frenzy, the students retreated from the buttresses and leaf litter and put away their aspirators. Since we had a bit of extra time, we continued down the trail where we encountered a variety of other sounds including:

The intermittent deafening buzz of a cicada

A pair of Starry Night Cracker butterflies (they were quiet at the moment, but males produce a cracking sounds as part of their territorial displays)

Needless to say, it was another exciting adventure into the rainforest for the SFS Panama crew. The sounds and sights left everyone feeling invigorated as we piled into the boats, grateful for the cool breeze that accompanies boat travel as we were whisked across the ocean towards the bright yellow buildings that we call home. 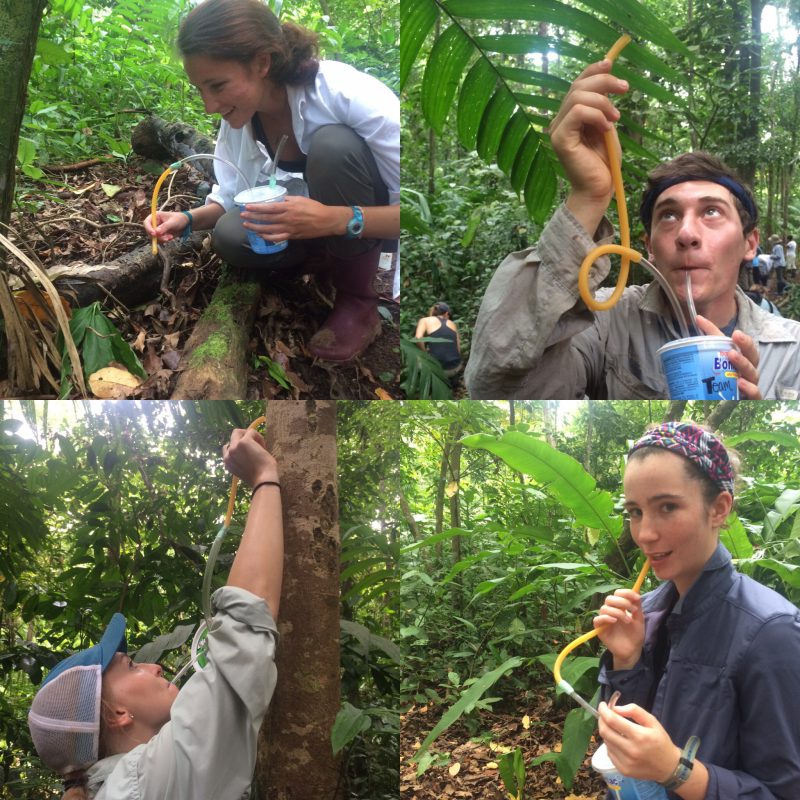 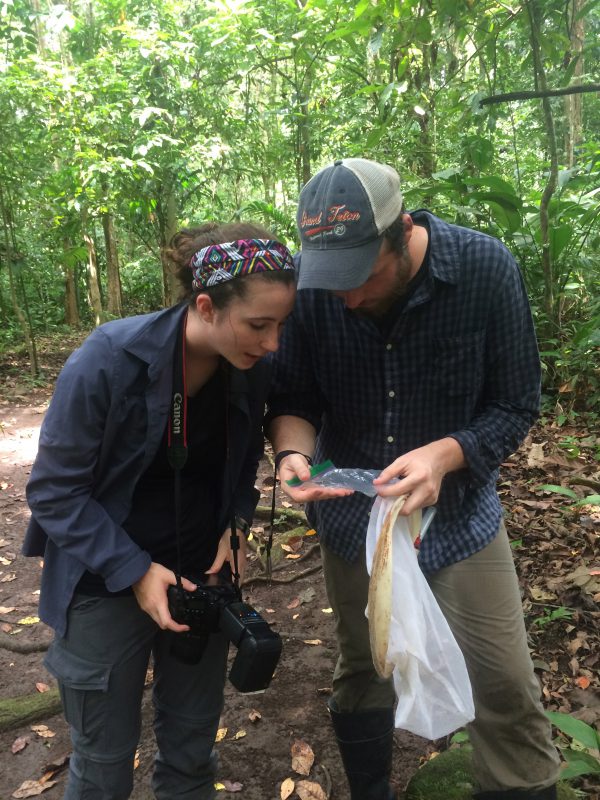 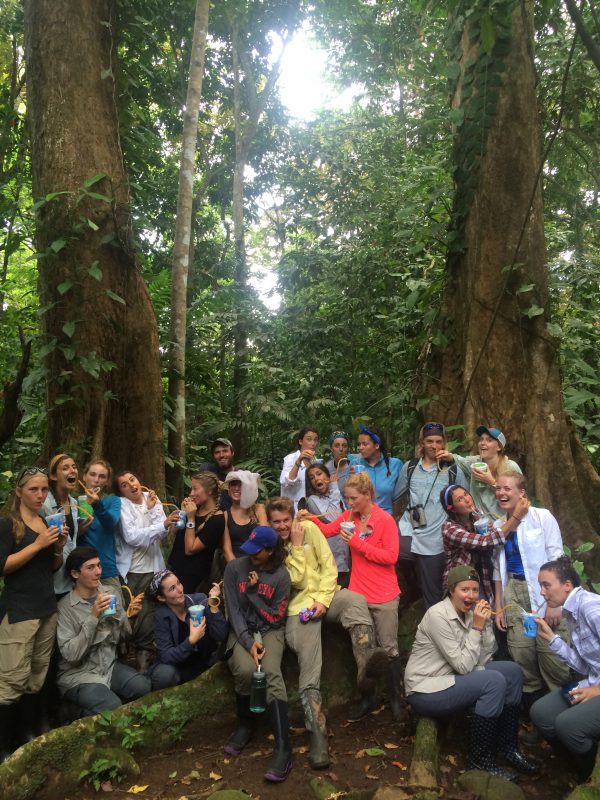 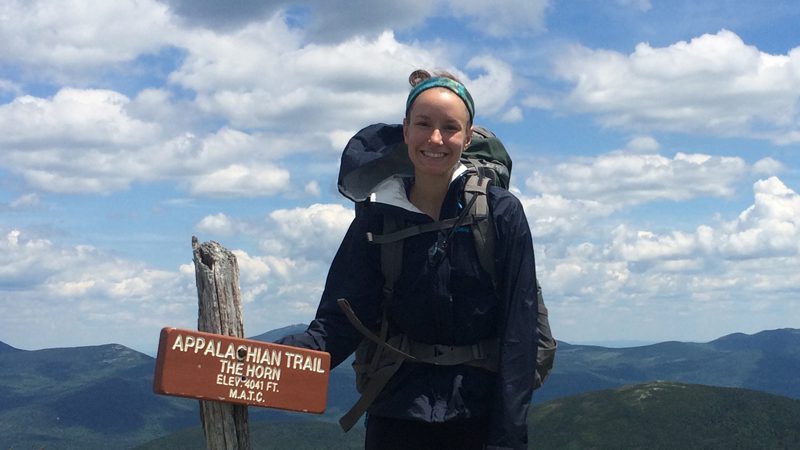