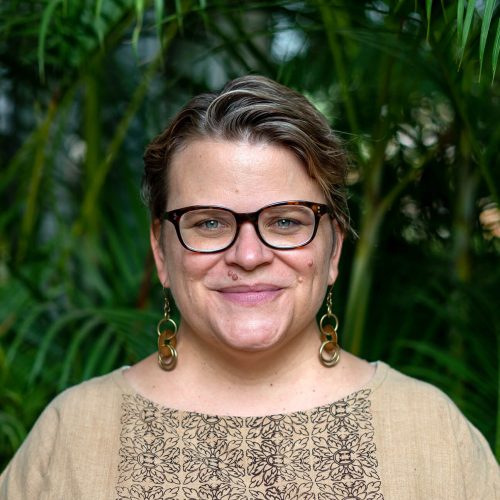 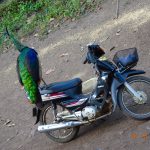 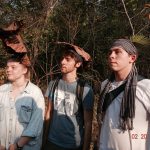 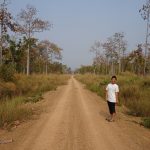 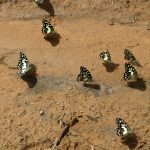 Into the Dry Wilds

The stereotypical forest ecosystem that springs to mind when many of us think of Southeast Asia is a tropical lowland evergreen rainforest. However, the northern and eastern plains of Cambodia are classified as part of the Lower Mekong Dry Forest Ecoregion, which is characterized by a mosaic of forest types. Deciduous dipterocarp forests dominate the ecoregion, scattered with mixed deciduous, semi-evergreen and bamboo forests, particularly along waterways. Between November and April, six key tree species in the deciduous dipterocarp forests shed their leaves. Some of these species are a critical source of resin, Cambodia’s most high value non-timber forest product.

Once known as the Serengeti of Asia, these plains traditionally supported a large quantity of grassland animals–predators such as tigers, leopards and dholes; ungulates such as gaur, banteng, Eld’s deer and sambar; scavengers such as critically endangered vultures and jackals; and the critical but often overlooked decomposers, the termite family. In addition, some of Cambodia’s rarest avifauna nest in this landscape: the giant ibis and the white-shouldered ibis. Since springs and rivers are scarce, waterholes locally known as tropeangs are vital for the larger species’ survival in the dry season.

Traditionally, this region of Cambodia had a low population density centered in remote villages, but in the present era, in-migration rates are high and human threats to the ecosystem are intensifying, such as logging, hunting and agricultural expansion. This February, for the first time ever, our students had the opportunity to stay in the dry forest ecosystem at a newly developed ecotourism site known as Betreed, located in a 6400 hectare community forest. Although the forest is still being gazetted at the national level, the Forestry Administration has already placed concrete boundary markers and is actively supporting community forest rangers in their efforts to patrol and prevent logging and poaching. 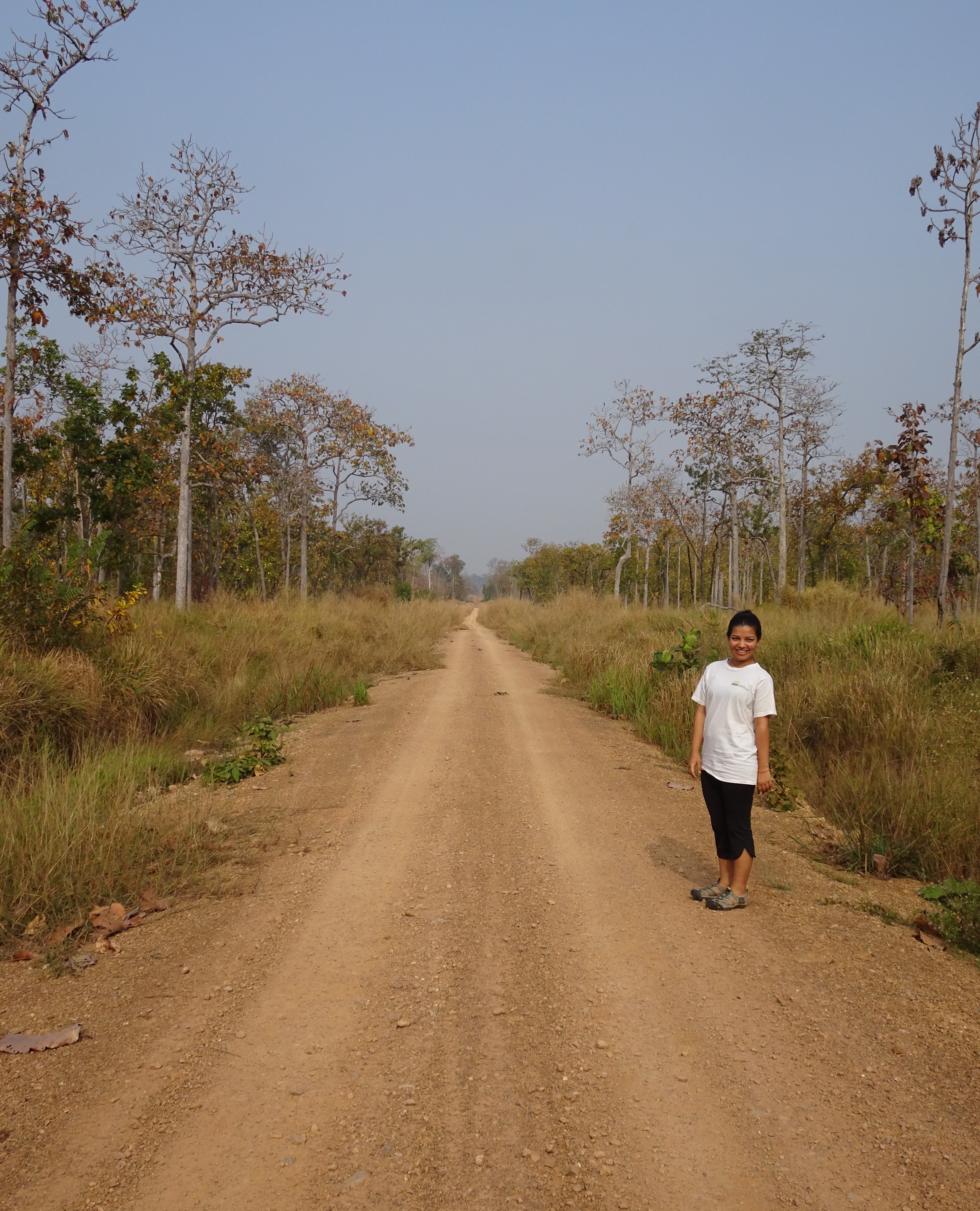 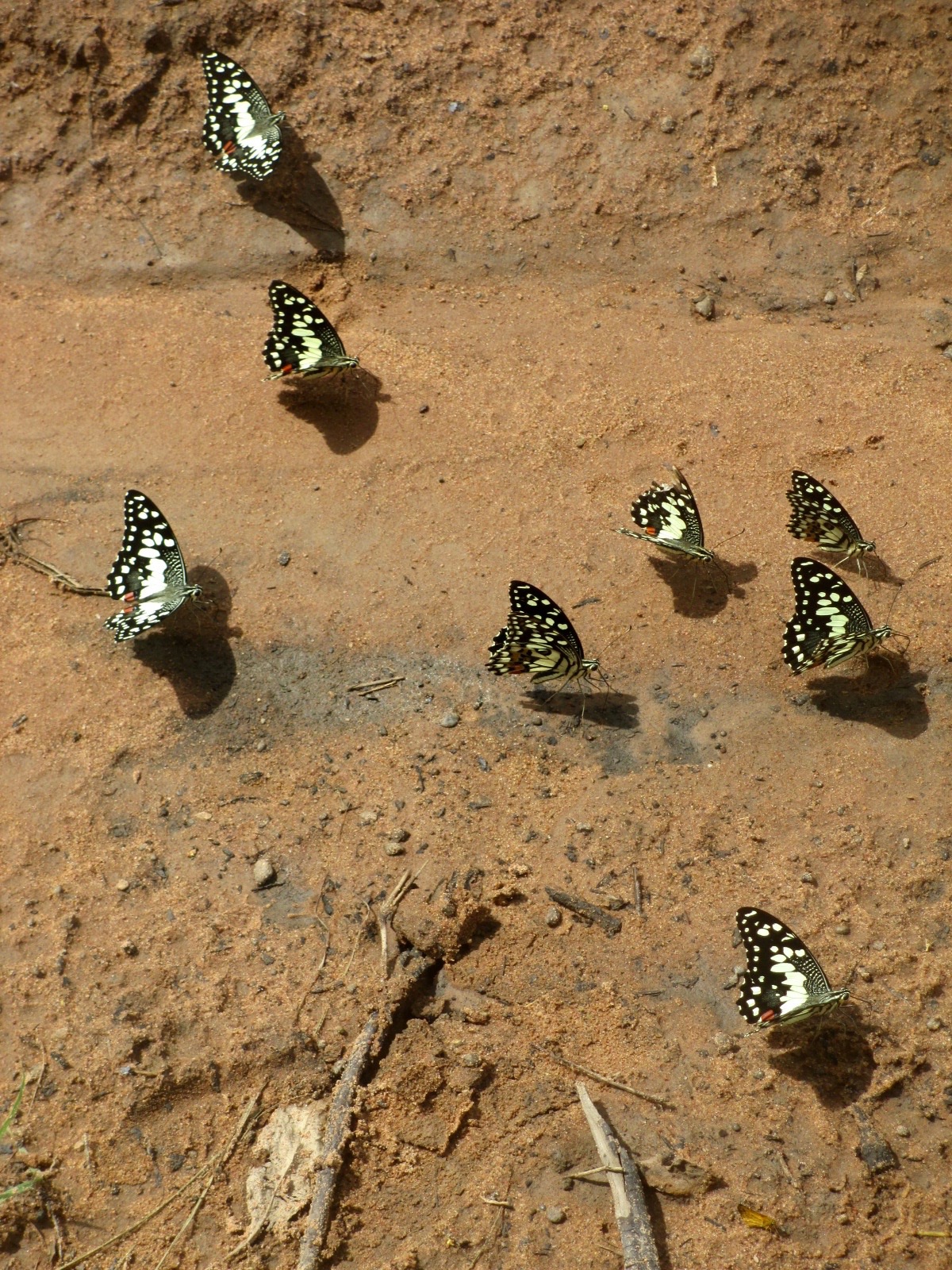 Students were able to learn about the characteristic flora and fauna of these vulnerable ecosystems while immersed in them. Class in the wild hardly feels like class. Students got to learn not only with their intellects and their pens in their hands. Instead, here is a small catalogue of other things I saw students doing with their hands–gathering the winged seeds of the dipterocarp trees; collecting fallen hornbill feathers; stroking the mottled and bruised-looking bark of the ghostly Lagerstroemia calyculata, draped in buttresses; holding sweat-seeking butterflies on the backs of their knuckles; cradling the strange hooked feet of the giant stick insect; and gently touching the pebbled back of an infant tokay gecko hunting on the leaf-strewn forest floor. 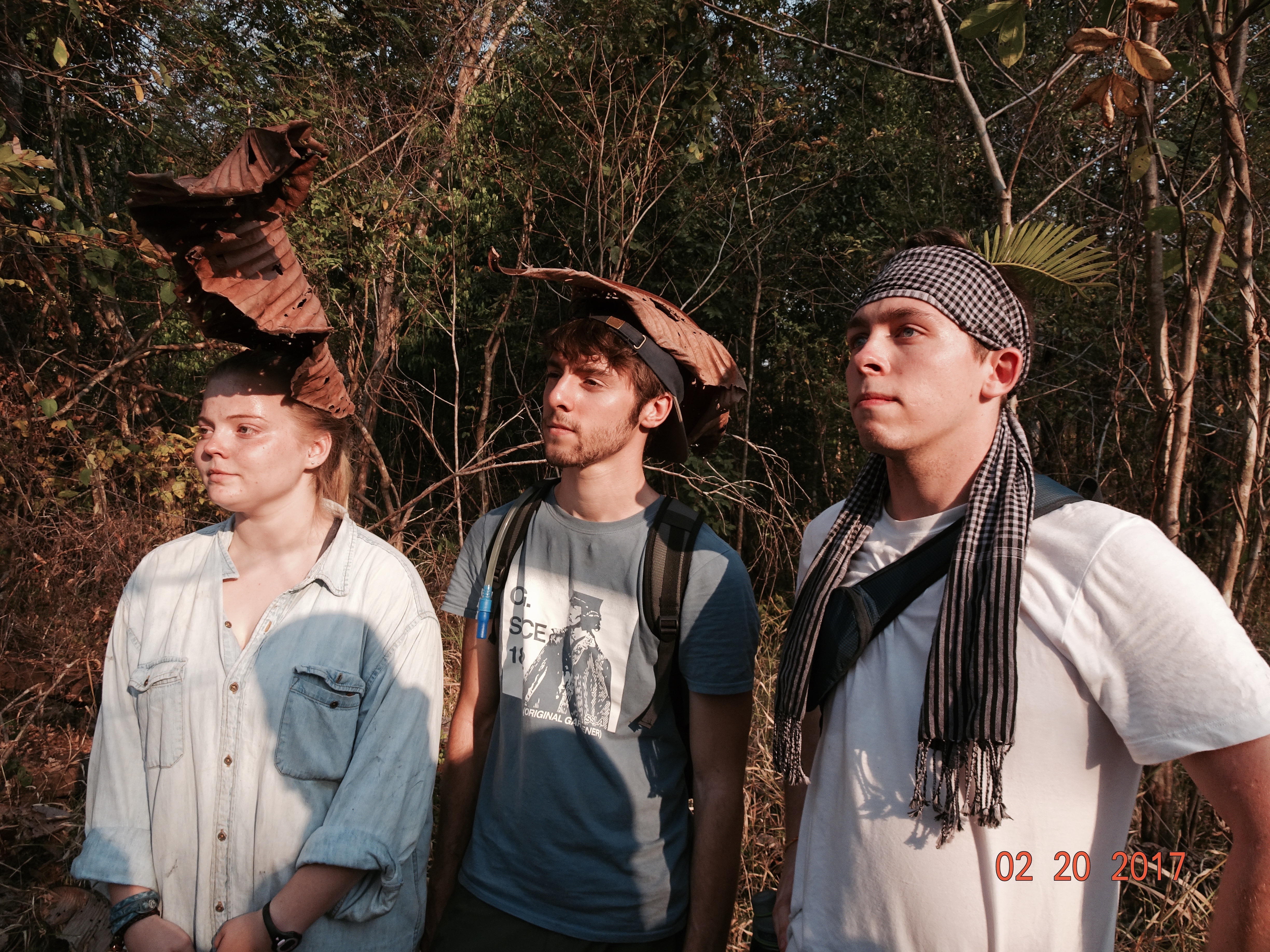 For their conservation science class, students were also in applied mode, learning to use field equipment that is key to establishing biodiversity baselines. With local rangers accompanying them, students set camera traps, small mammal traps, insect pitfall traps and hanging butterfly net traps. Later, students examined and identified the creatures caught within them.

Students also had the opportunity to interview local community forest committee members and community rangers, as well as the expatriate couple managing the ecotourism site. Current challenges and future plans for conservation, promoting environmental awareness and alternative livelihoods were vividly described for the students. The project is still in its infancy. Community benefits from ecotourism take time to grow, particularly when a project is deliberately attempting to remain small and minimize visitors’ impact on its natural surroundings. For the time being, it remains more lucrative to destroy the forest than to preserve it, and outsiders from neighboring districts and provinces continue to pose an ongoing threat to the biodiversity of the area. The animal populations are still abundant, but pressure from hunters and loggers remains very high.

One further threat to these unique ecosystems are seasonal fires, often lit by hunters seeking to flush animals. Despite the damage these fires can cause, particularly if they grow large and move across large swathes of grassland, this anthropogenic phenomenon has long been part of this ecosystem. Most of the tree species that can thrive in the dry dipterocarp ecosystem have thick fire-resistant bark, although our hosts showed us the damage even these species can retain serious damage after years of continued burning. Due to the community rangers’ diligence, the community forest near the ecotourism site had not experienced a wildfire for four years, and a number of rosewood saplings had been replanted by the local community. Semi-evergreen species were starting to rise among the deciduous trees, giving support to our hosts’ theory that if fires decreased, the forest ecosystem balance of the region would shift over time, with more semi-evergreen forest emerging and the deciduous forests shrinking to only the sandiest, most lateric soils.

Tragically, the week before our visit, a wildfire lit by poachers burned through the area and destroyed most of the young rosewood trees and the young fire-sensitive semi-evergreen species in the dry deciduous portions of the site. The mobile species of animals retreated to the semi-evergreen forest around the mountain, and were only slowly reemerging during our visit. Amidst the ash-strewn plains, cleared of grass and leaf debris, the scorched but living trunks of the deciduous specialists stood tall. In the wet season this site is lush and vibrant with green life. Yet even newly burned, desolate in its fragility, the dry deciduous forest was full of life. 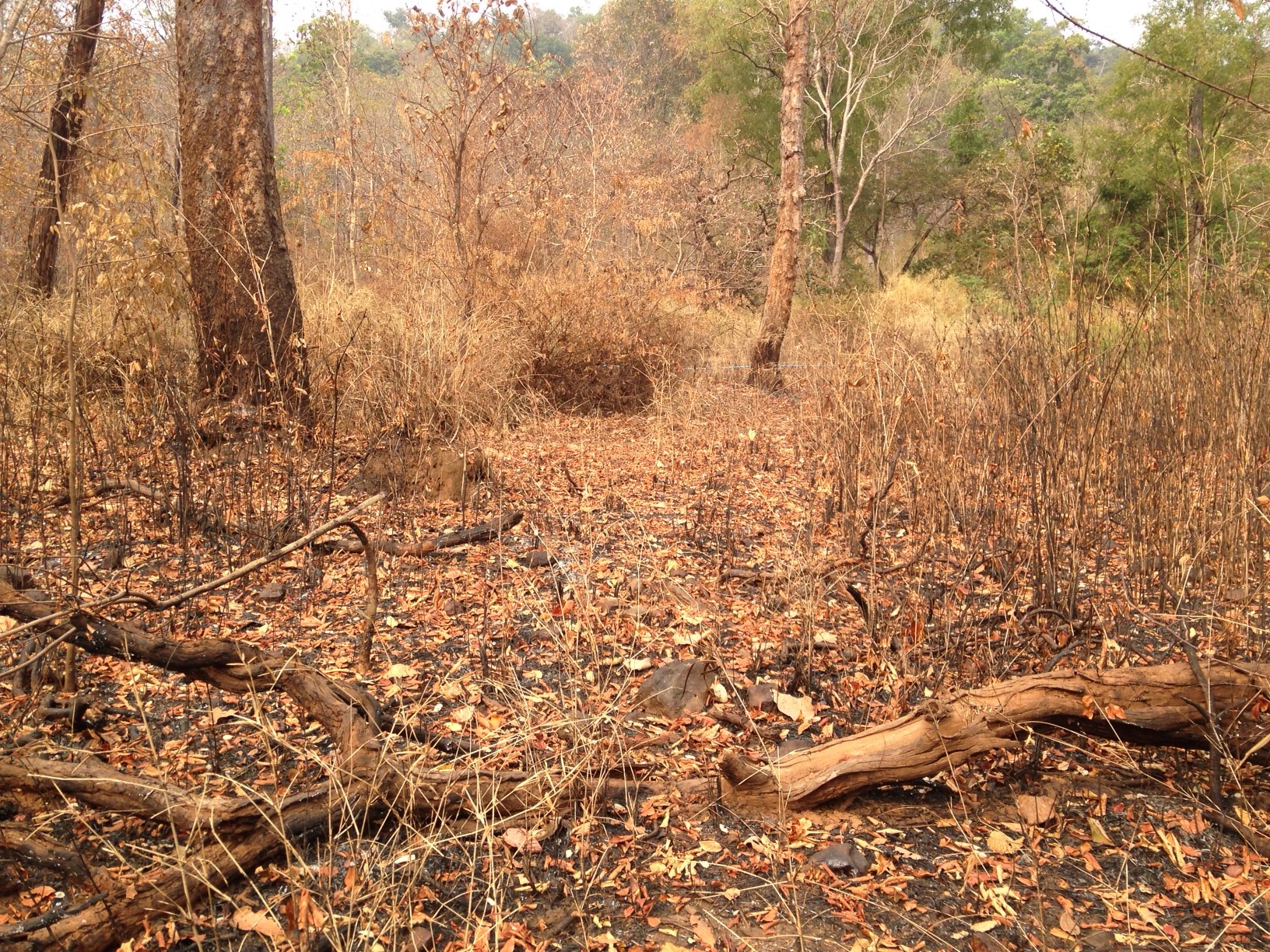 I am grateful that students were able to see some amazing new organisms–students variously saw silver langurs, a scorpion, a ferret badger, green peafowl, cycads, wild mango trees and a collared falconet, one of the world’s smallest birds of prey. But even more so, I am grateful that our students had the opportunity to engage with those who strive to protect and support the creatures of these valuable and threatened ecosystems. There is much to be learnt, and our students are eager to continue their learning journey south towards the Mekong Delta in the days to come. 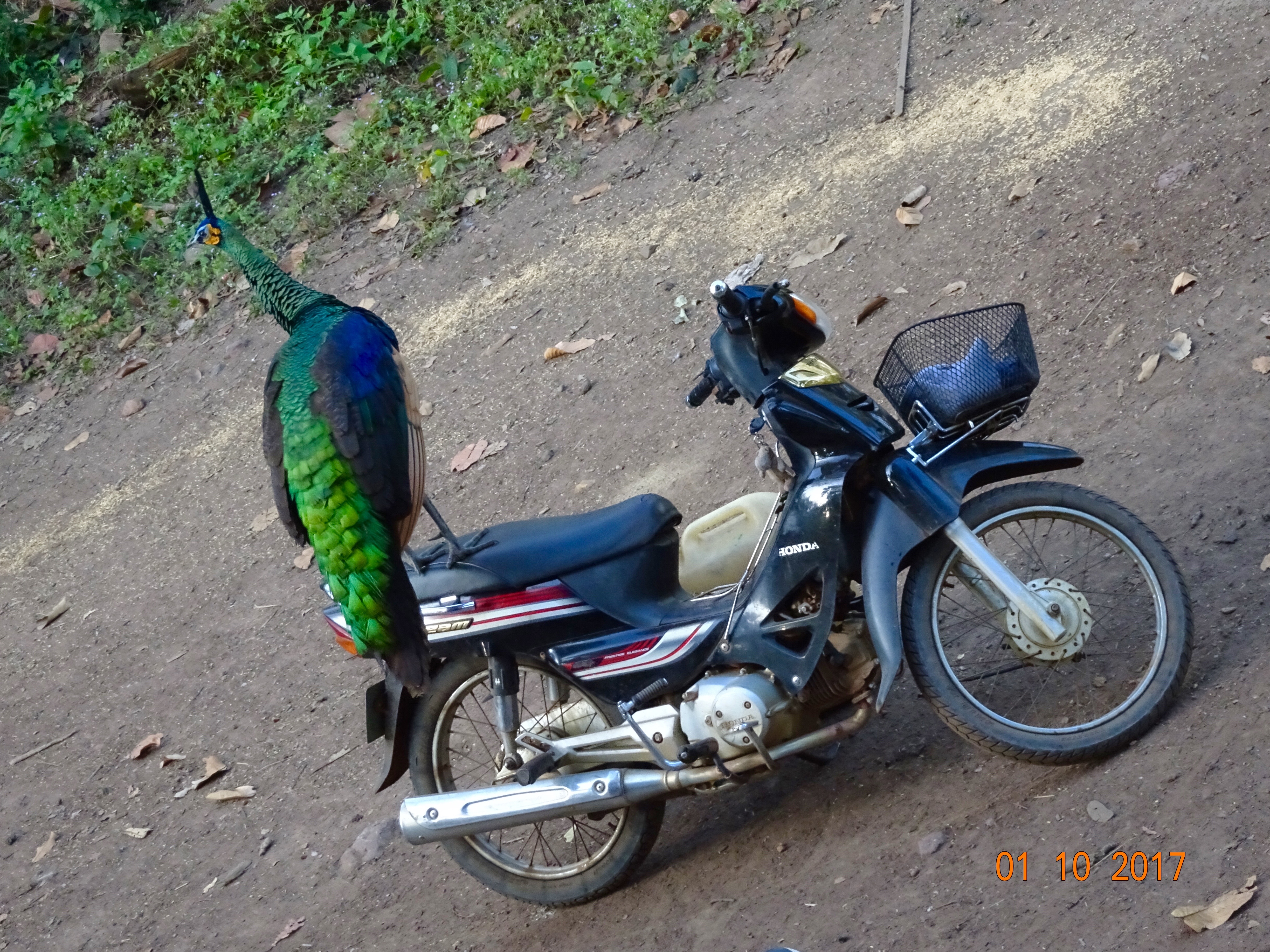 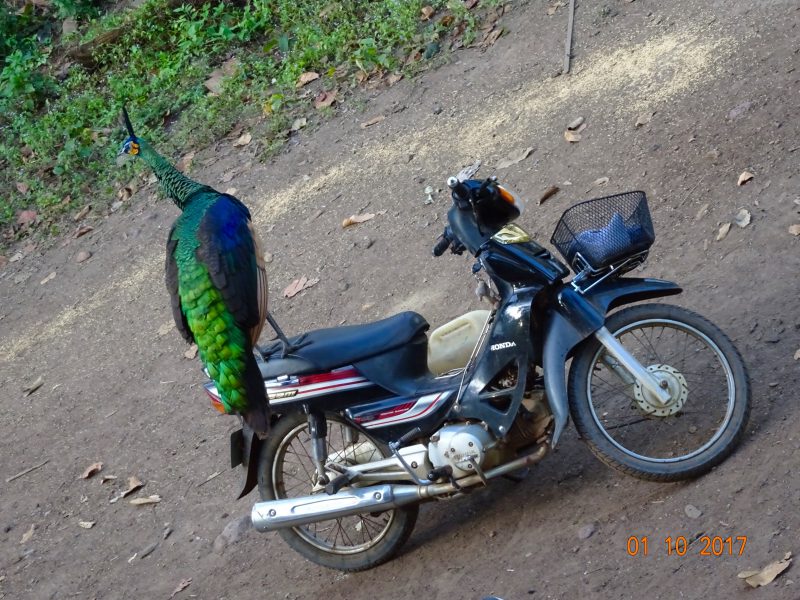 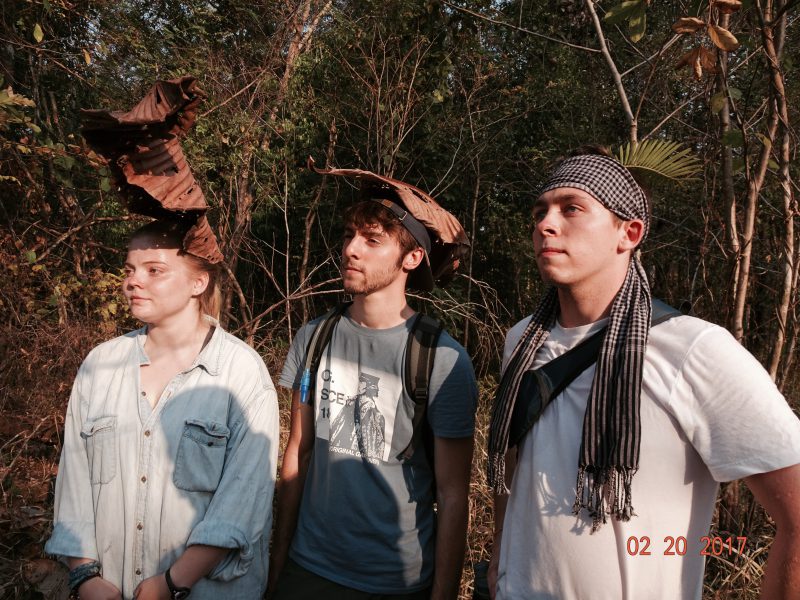 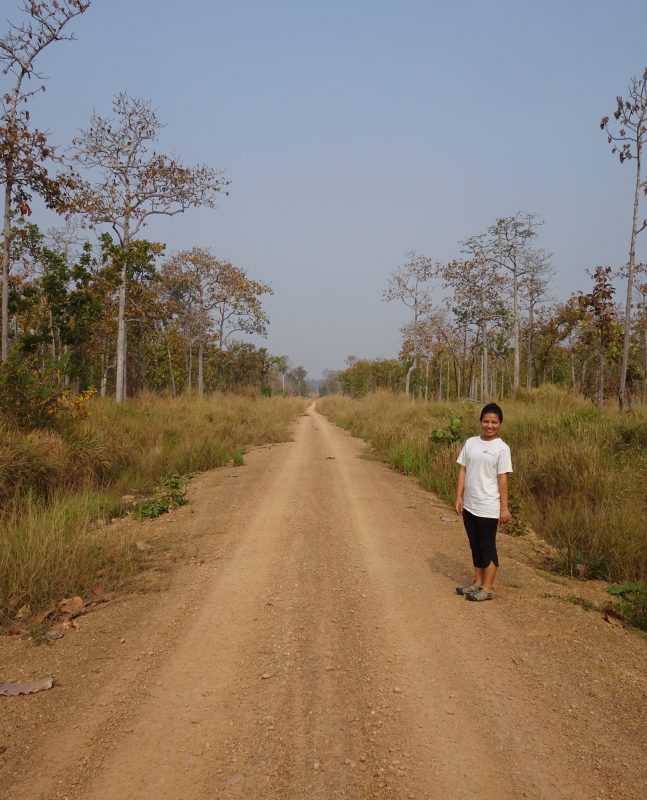 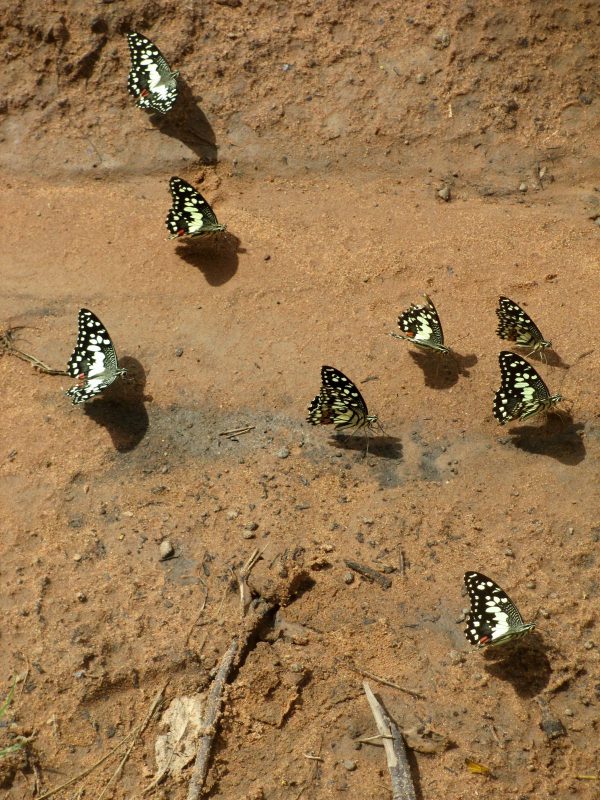