Out in the Field with the Yellow-Bellied Glider

Since 2012 the SFS Centre for Rainforest Studies (CRS) has been involved in habitat surveys and research in relation to the protection of the vulnerable northern species of the Yellow-bellied Glider (Petaurus australis) (YBG). Currently the protection of the habitat of this species relies on the enthusiasm and dedicated work of a few volunteers which makes contributions from students and faculties of CRS very valuable.

Former students of CRS have spent endless hours in glider-occupied habitats, habitats not used by gliders and habitats that were abandoned by gliders to identify essential habitat features that meet the ecological requirements of this species. This has resulted in a published research report of the ecology faculty together with former students on a preliminary study to assess habitat requirements of this species based on simple methods that can be applied in future citizen science projects (Heise-Pavlov et al. 2017).

Last week students of this semester continued with this research using refined methods to assess the suitability of an area for the yellow-bellied glider. Students learnt and utilized skills to navigate in unknown terrain using GPS and compass, to identify Eucalyptus species (from which some are essential for gliders to use a habitat), to measure vegetation features such as the height and diameter of trees, and to assess the density of invasive species, such as lantana (Lantana camara). They practised data collection in the field and the storage of the collected data in appropriate formats. Some locals assisted the students in their data collection and were impressed by the enthusiasm and dedication of the students to survey an area from which we had no knowledge about its suitability for gliders. 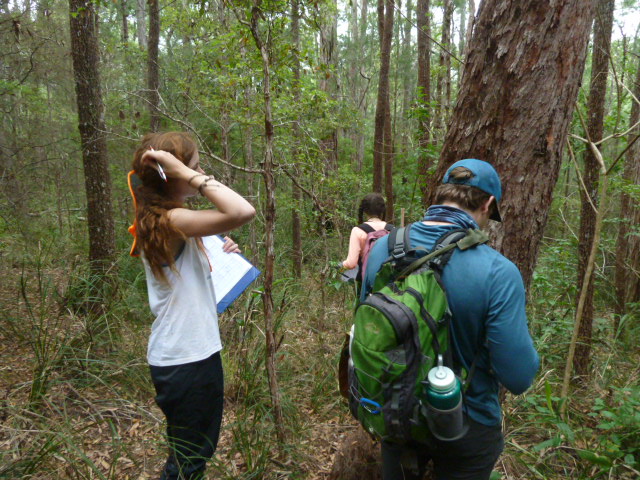 But students did not only contribute to habitat surveys for the protection of the YBG in north Queensland. In previous News from the Field I reported about a call recording device that had been built with support from a crowdfunding campaign in order to record and analyse calls from this quite vocal species with the aim to use the calls to identify individuals and thus to be able to assess population densities of this species. To record calls individual gliders have to be observed after dusk when they arrive at their feeding trees to extract sap. This is usually the time they interact by using various calls. Students helped in these observations by sitting around trees gliders were known to feed on. Beside a very thorough recording of interactions and vocalization of the observed individuals, students enjoyed seeing this unique animal.

With their enthusiasm and dedication students of this semester assisted in habitat surveys and ongoing research to protect this unique species of the Wet Tropics Bioregion of Australia. They contributed to the work of the volunteers of the Tropical Glider Group for which this group is very grateful.