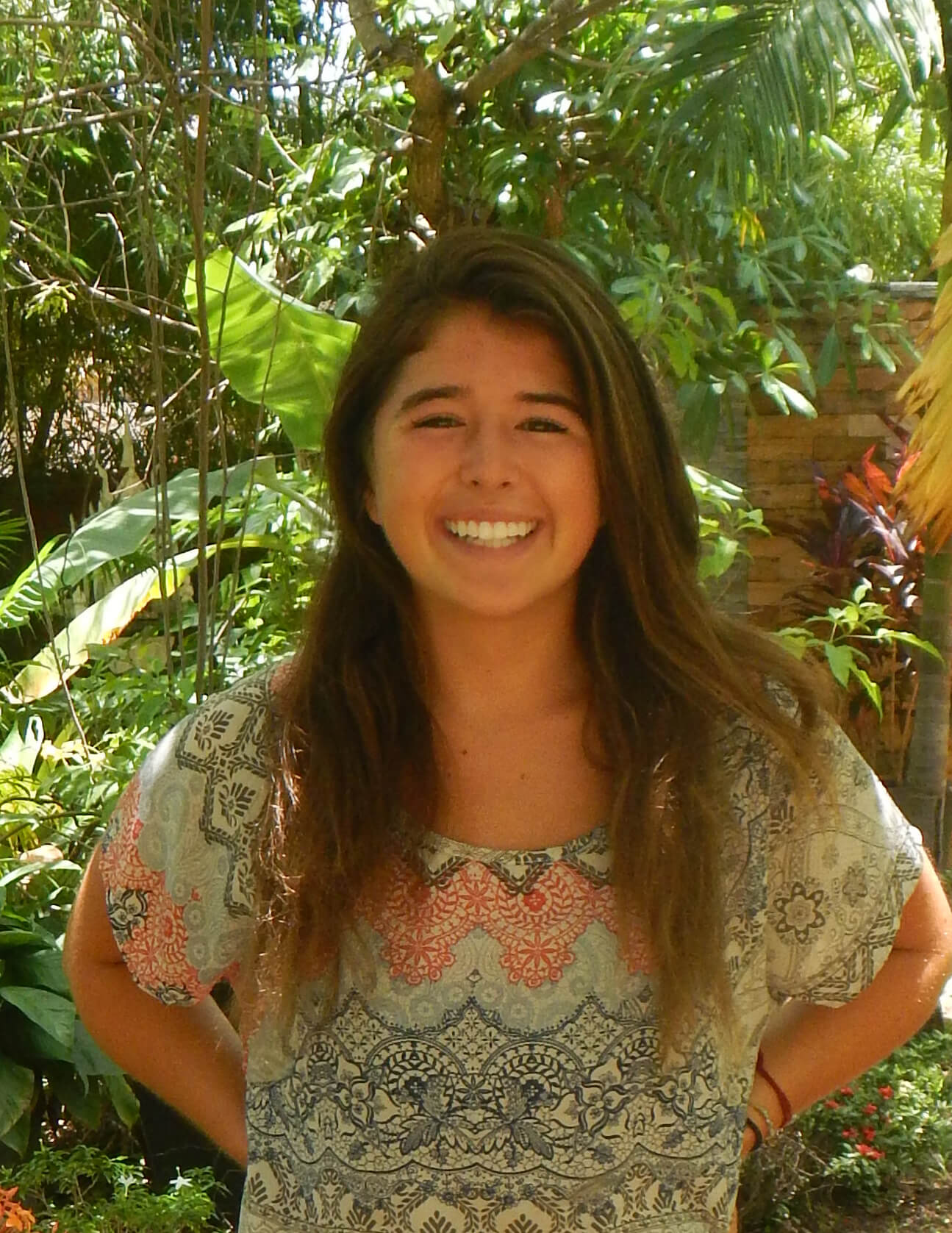 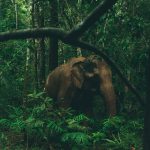 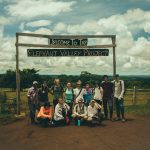 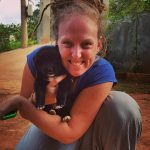 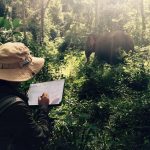 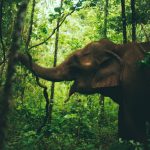 How an Elephant Sneaks Up on You 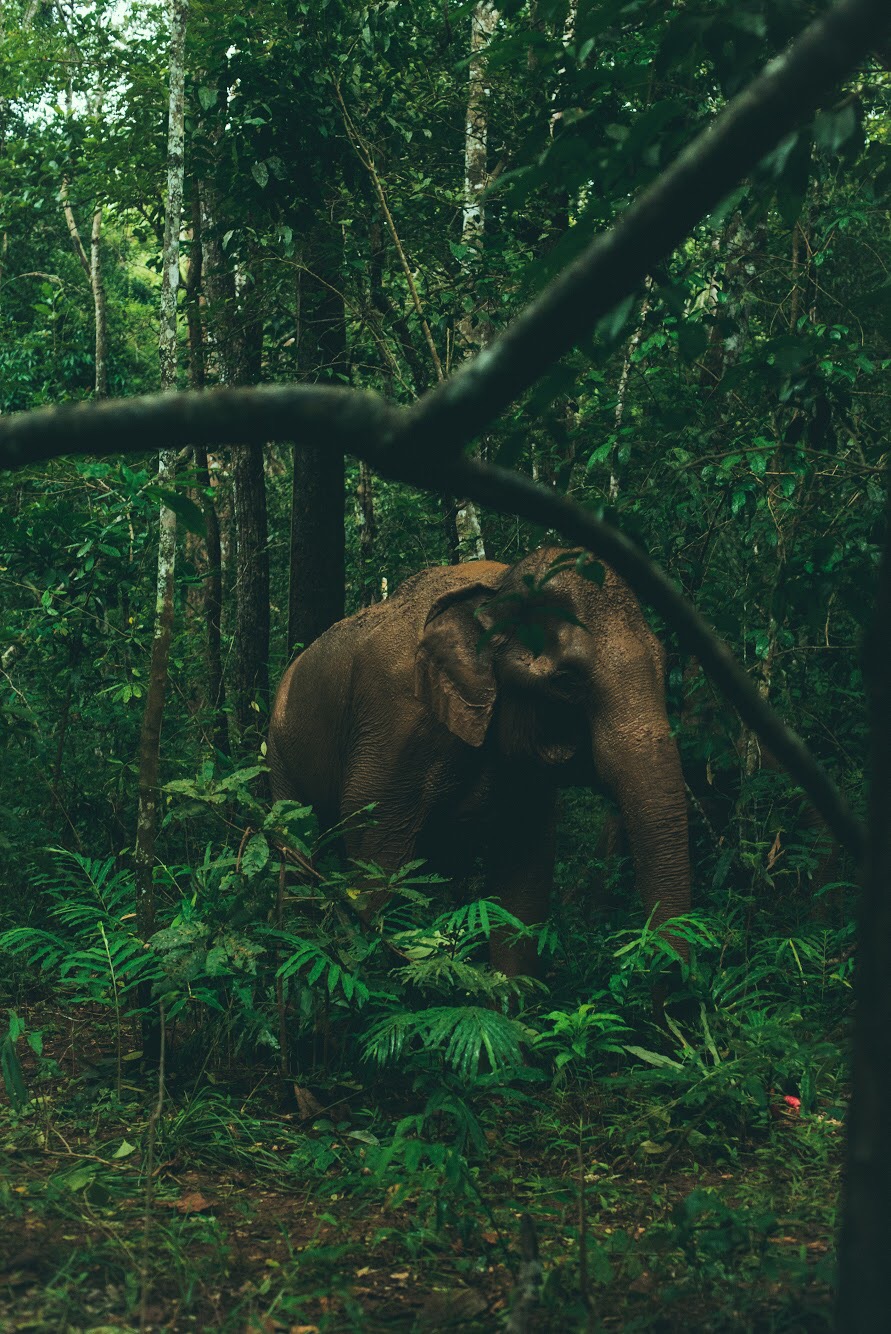 We begin every day at 7am with a fresh banana shake, cup of hot nutty-coffee that’s peculiarly distinct to Cambodia, a piece of passion fruit, and baguette with Nutella. Then we’re off in the vans, eagerly racing across the dirt roads to get to the Elephant Valley Project. Just the van ride there is an event; there’s so much to see driving through the villages and most days we get a little delayed because there’s a herd of cows or water-buffalos slowly walking through the village street, or a huge Khmer wedding being set up. We meet our guides in a safari-esque setting perched on the top of a hill. The view over the valley is incredible; the horizon line is far in the distance and everything below it looks like a sea of blue-green trees. 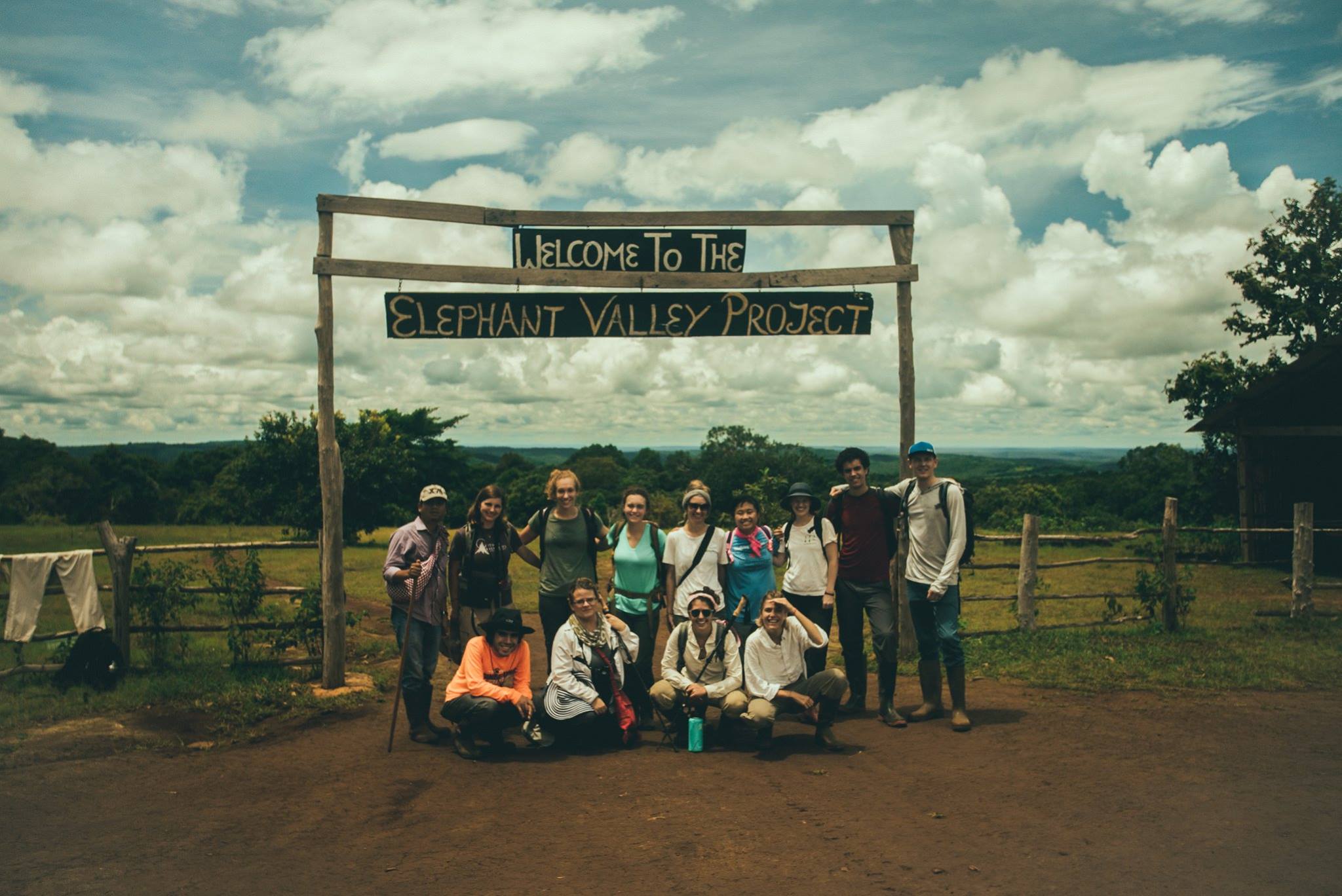 Next, we all hop in Jemma’s charming “truck-a-saurus” and hold on as we drive further out into the jungle. Jemma is the awesome manager of the Elephant Valley Project, Cambodia’s most ethically responsible elephant sanctuary where we are lucky enough to study the semi-captive elephants’ foraging behavior. When the dirt track ends and we can’t go any further in Jemma’s truck we hop out and begin our hike down into the jungle. The mahouts (indigenous Bunong men who have been passed down knowledge about how to care for elephants from generations before them) lead us down a few kilometers to where the elephants are browsing. 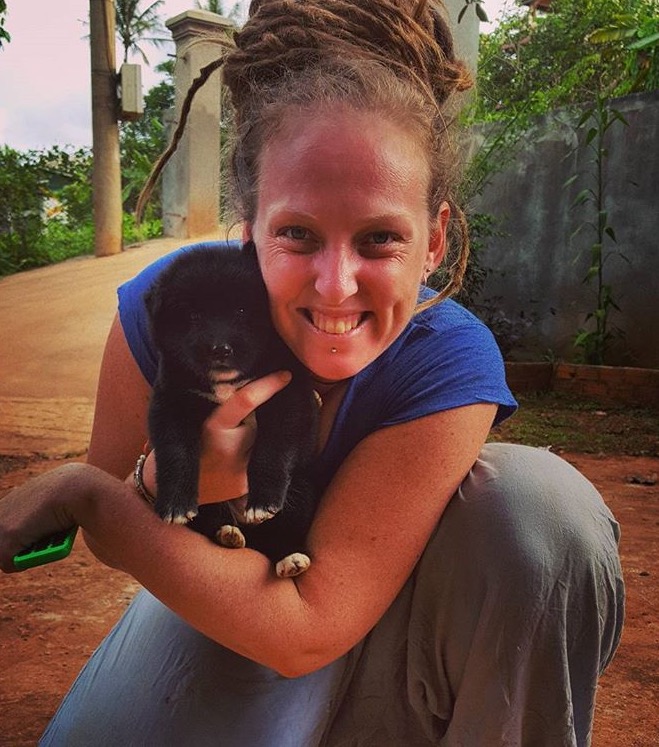 Every day it still amazes me how you won’t see anything coming, and then the wall of jungle before you will slightly shake, the delicate leaves will shiver, and then you’ll realize a huge elephant is just a few meters away from you. “How did you sneak up on us!” Jemma usually laughs. Mesmerized, I can’t help but say, “Good morning Beautiful” as the three queens of the jungle emerge. Pearl, Ning-Wan, and Mae-Nang are three of the elephants I get to observe every other morning. They used to be forced to work in logging camps or in other low-welfare conditions, but now they’re retired and live out their days peacefully foraging through the 1500 hectares of Deciduous, Evergreen, and Bamboo forests. They get a bath by their Mahouts in the Oh-Bompat River in the valley appropriately named “Heaven.” Then, as soon as they get out of the river they suck some dirt in their trunk and spray it all over their body (this is a technique called dusting that they use to protect their skin from the sun and insect bites). Then they scratch themselves against the bark of trees like the bear in the Jungle Book does. Next, their breakfast (and my research) finally begin. 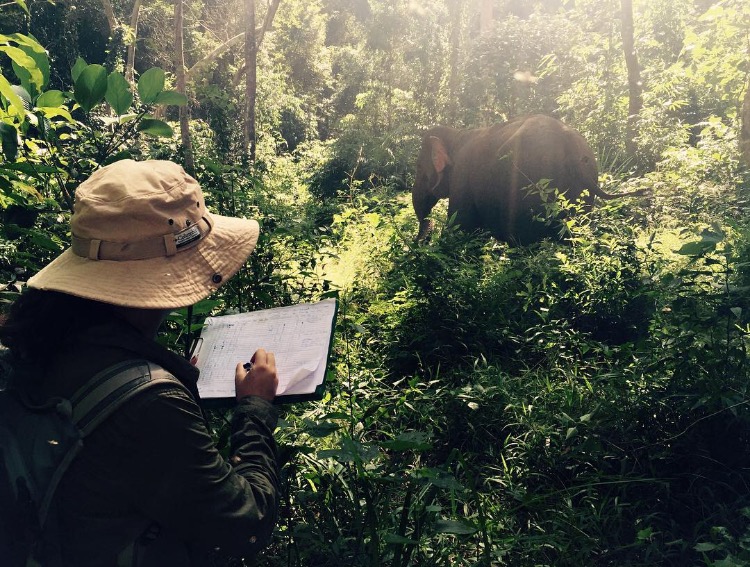 It’s an all-you-can-eat buffet breakfast in the jungle for the elephants. Vines, grass, trees bark; it’s all fair game. We follow at a safe distance behind, and at precise two minute intervals I record everything about their behavior and what habitat they’re in. As a team we methodically identify all the plant species that the elephants forage upon. This research is important because it gives insight into how formerly captive elephants adapt to a more natural environment, and the information about what species of plants the elephants target most can be used by local farmers to strategically plant what crops are around their farms and thus reduce human-elephant conflict. 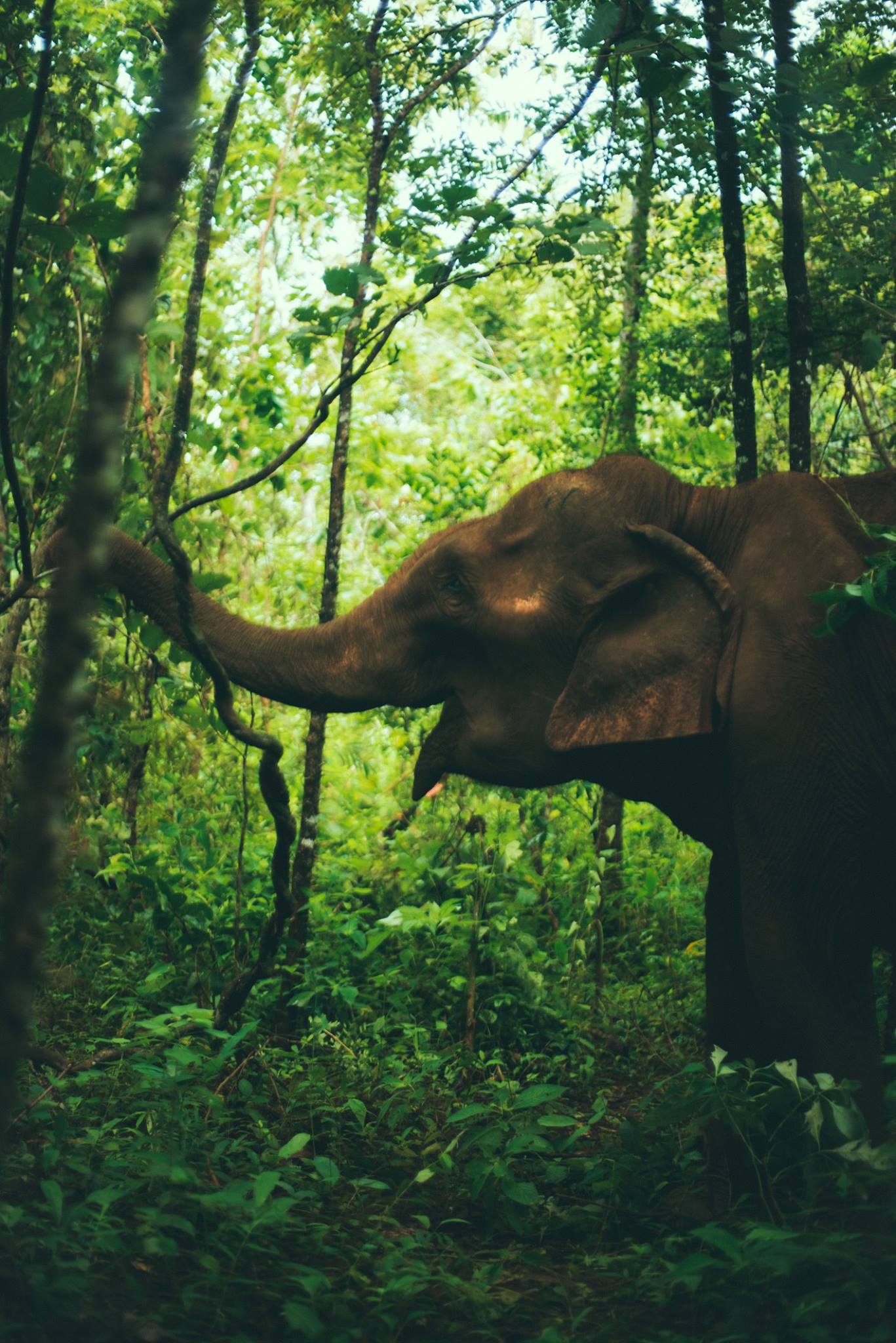 Another elephant, Easy Rider, pulling down a vine to eat. Photo courtesy of Anna Chahuneau

Elephants have to consume 10% of their body weight in food each day to maintain a healthy weight, so it’s not surprising that most of the entries on my data sheet are about the elephants feeding; however, there are exceptions. One of my favorite interactions we’ve observed was when the elephants encountered a Ruby-Eyed Pit Viper. The glint of the viper’s ruby eyes caught the elephants’ attention from the foliage and the usually docile, friendly giants transformed into a formidable terror as they stomped the ground and trumpeted violently. Pearl, the youngest elephant, began to pee just like a scared human would. The Cambodian Mahouts went up and caught the snake and threw it off into the river, but Pearl was still scared and continued to stomp the ground and whimper a high-pitched chirp. Ning-Wan, the Matriarch of the group soothingly intertwined her trunk around Pearl’s. I’m not anthropomorphizing when I say that it was an emotional gesture. My heart skipped a beat as I watched Ning-Wan reassure Pearl that it was okay, for it was so undeniable in that moment how intelligent they truly are and how much they feel. This encounter made me reflect upon how human’s intelligence is not necessarily superior to other animals, but just takes a different form. As the renowned ethologist Frans de Waal puts it, “People often assume a cognitive ladder from lower to higher forms, with our own intelligence at the top. But what if it is more like a bush, with cognition taking different forms that are often incomparable to ours?” He dares to ask, “Are we open-minded enough to acknowledge that other species have a mental life?” Animal intelligence is like the elephant that sneaks up on you in the forest; it is huge and obviously there but somehow at times we still fail to realize it’s there! It is so important that people understand that animals are our fellow creatures; that we must protect them and love them as we love ourselves in order to truly better our world. I feel so lucky that all the experiences I’ve had this semester and all that I’ve learned has empowered me to go forth and increase this understanding in my future career. 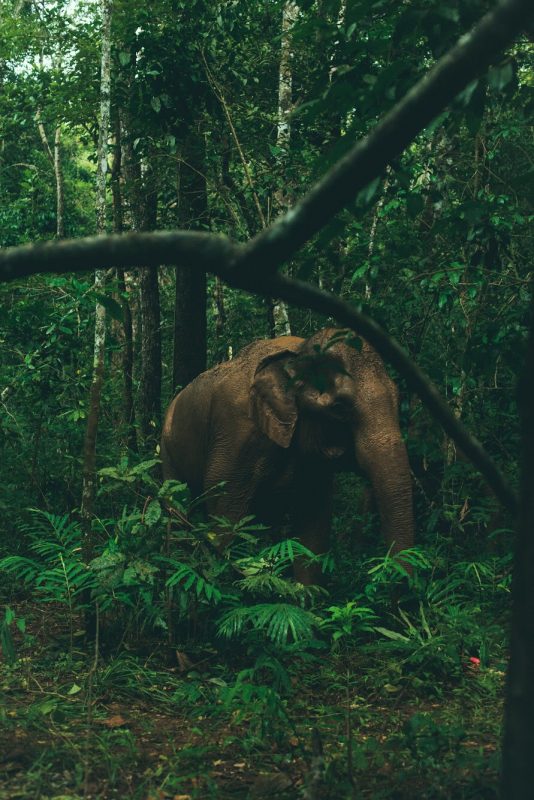 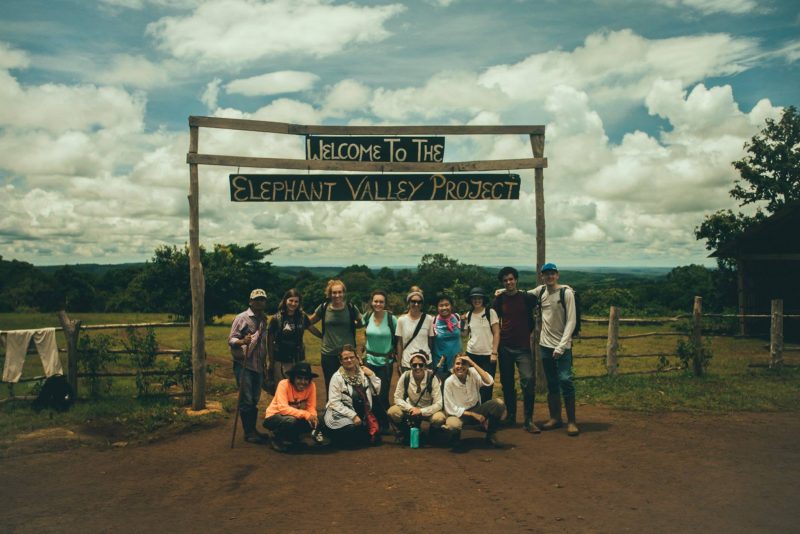 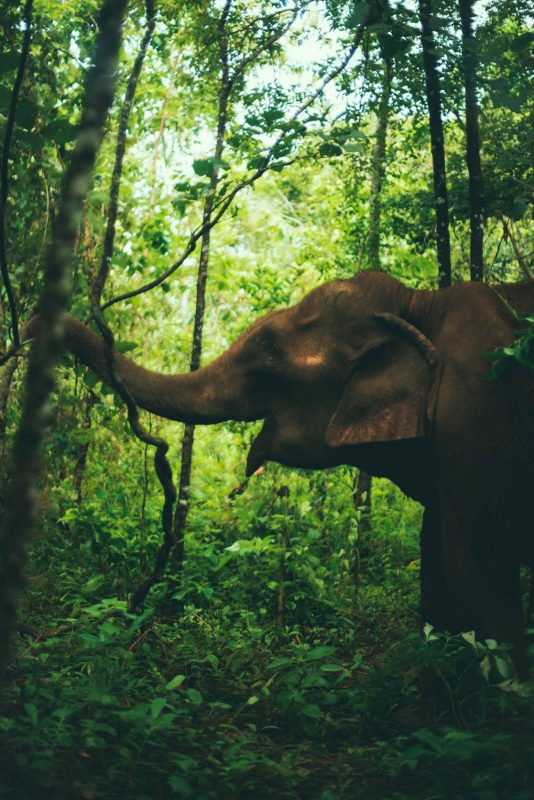