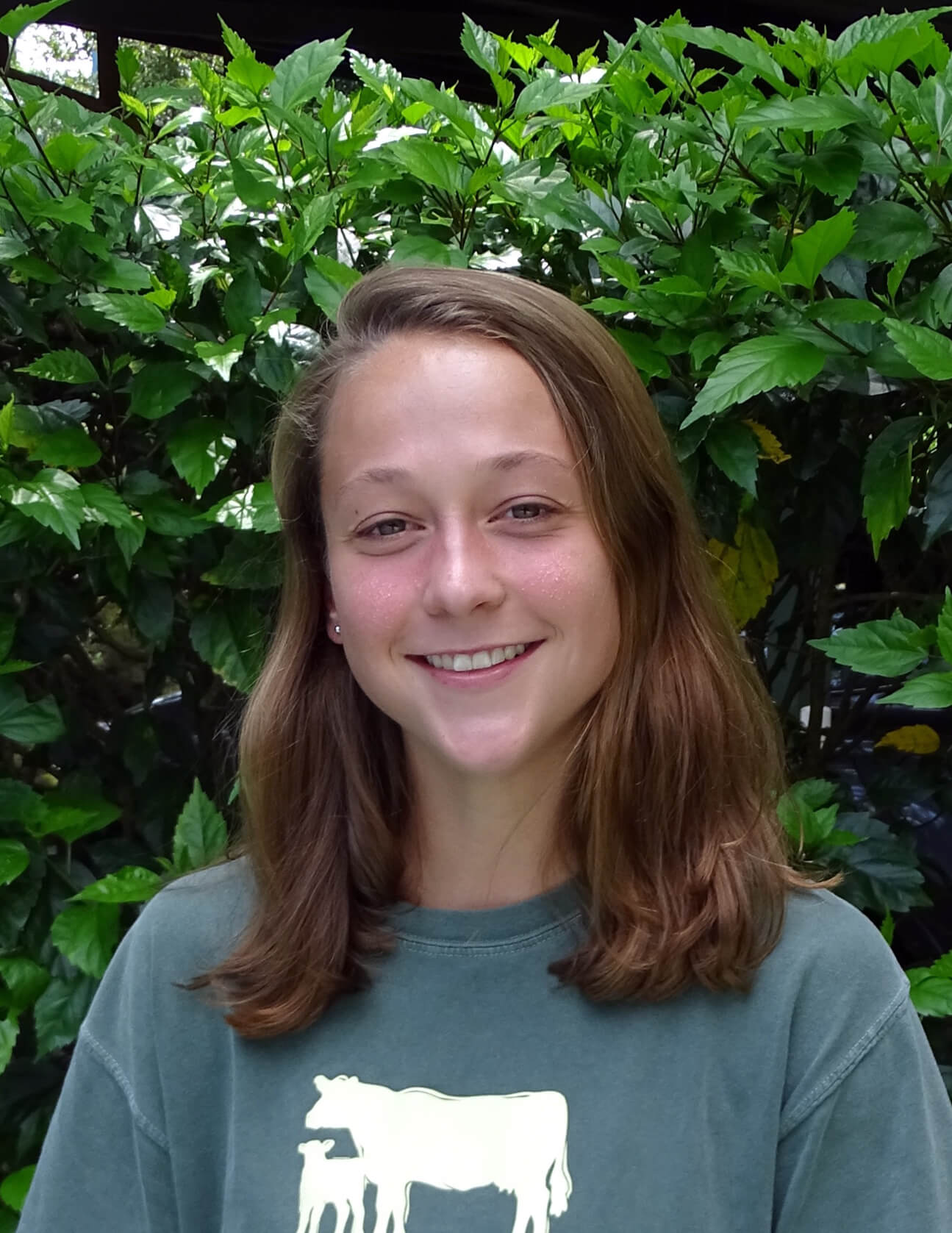 The sun blazed over our research group as we weaved our way through the rows of coffee plants, guided by the little red line on our handheld compass. Sarah held the orange measuring tape high above her head as we walked the straight line through the farm, creating the perimeter of the plot for our research. When the leaves got too thick and unsurpassable, Sarah handed off the measuring tape through the branches to Louisa, who continued until it got too dense again, at which point another team member was waiting. We continued on like this, measuring out the 100 meters little by little, passing the measuring tape off to one another, naturally switching roles of who was leading and who was doing the various tasks in an easy sort of dance.

As we seamlessly weaved through the thicket of coffee branches, we found that there was something slightly more than a thicket straight ahead. A full-grown forest, which included a dense collection of bamboo, towered over us, directly where the compass was telling us to go. We heard our professor Achim’s dismayed “oh no” from a few coffee rows away. The plots we were measuring had to be in the exact same place as they had been eight years ago (the last time Achim had collected data on this farm) so that the study would be consistent. Achim spoke with the farmer, Leo, and learned that a large portion of the farm had been infected by the coffee rust fungus, so Leo had let this area become overgrown for the past few years.

I was amazed by how easily and quickly living things grew here. In only a few years of no pruning, a full-grown forest had sprung up. In Costa Rica, you could stick a branch into the ground and in a matter of weeks it would have begun to grow into a tree, with no care or tending whatsoever (I knew this because we had done it ourselves earlier in the semester). Life was abundant and bursting at the seams, and it was beautiful. It astounded and inspired me every day that I spent in Costa Rica. This is what was worth saving on our planet, this lush green life that was striving to be.

My daydreaming was interrupted by Achim telling us we would continue onwards, straight through the thickest part of what he had now begun to refer to as “The Jungle”. This jungle was directly where the compass was instructing us to go, and just because it wasn’t expected that this farm would include a forest, didn’t mean we were allowed to exclude it from our study or go around it. We had to go straight into this mess. Overgrowth and difficulty do not stop for science. Science doesn’t let you give up or change direction when something doesn’t go according to plan. You have to continue through it in the way that you said you would go, and then report the messy things that got in your way. Our Earth is messy and unpredictable and logical all at once.

What originally appeared to be an impossible task of moving through tightly packed bamboo stands, soon became traversable because we simply made it happen, and because we did it together. The final test came when Sarah had to throw the measuring tape all the way through the bamboo grove to Achim who was waiting on the other side. A wide ditch separated the two of them, and Achim was not even visible through the dense vegetation. But with his voice, Achim guided Sarah on which direction to throw, and (after a few attempts) we were finally successful at getting the tape across the ditch and continuing on the path of our plot’s perimeter.

Looking back now, I see this moment as encompassing a few of the major lessons that I learned during my time with SFS. Not only did it show me that persevering through unexpected or difficult obstacles is crucial to life and to science, but also that community and teamwork are necessary in achieving this. It is easy to fall into the trap of thinking of science as a cold and logical entity, separate from the creativity and soulfulness of humanity. But I found that people are, in fact, at the heart of science. Science is dependent upon people, and thus it is inherently intertwined with humanity.

Along with the wealth of knowledge and practical skills I learned from our incredible professors, the most valuable part of SFS to me was the friendships and sense of community that I gained from the program. In our studies of sustainable development and agriculture in Costa Rica, I realized that so many environmental issues depend on compromise, and on working with the community to find something that benefits both their well-being and the prosperity of the Earth. This was particularly highlighted in the focus of my directed research project: agroforestry, which is a sustainable land use method that incorporates forest diversity into agriculture. Rather than heavily exploiting one corner of the earth for agriculture and preserving another, agroforestry allows people to cultivate and improve their livelihoods while simultaneously conserving biodiversity, thus benefiting both the people and the planet.

As well as being essential to large-scale environmental issues, I found community to be a vital ingredient in scientific problem solving at a smaller scale as well. Teamwork is crucial to environmental studies. Although rooted in science, environmental problem-solving depends upon cooperation and communication. It requires the creativity, teamwork, and empathy of humanity. I saw this proved again and again throughout the course of the semester. I saw the value of community as I watched tiny elementary school students planting beans and flowers in raised beds for an outreach activity we conducted at a local school. They were bursting with excitement and using all of their strength to dig holes for the new plants, passing the shovel to a peer when they were too tired to continue, and then eagerly waiting for their turn to come around again.

I heard the resonance of community when we surveyed dozens of Ticos, asking them for their perspectives on environmental issues, and listening to what they believed should be done in their communities.

I felt the power of community when my peers and I were sprawled on the couches in the common room, exchanging ideas about environmental issues that we had come to live and breathe and think about in our own time. I was amazed by the patience and civility that every single one of my classmates maintained, even in difficult conversations of different opinions. My peers taught me that upholding this mindset of community, even when controversial discussions arise, is integral to dealing with environmental issues that face our planet in the future.

I will be forever grateful for my SFS experience. It gave me 17 lifelong friends, all beautiful, strong, intelligent people. It taught me to value the importance of teamwork and communication in difficult matters, and to keep that with me in whatever hard task may be presented to me throughout my life. It reminded me to honor community at the forefront of all environmental issues. SFS taught me to trek straight through the thickest messiest parts of the jungle, and to know that there would be someone on the other side waiting to reach through and carry the measuring tape for a while when it got too hard.

Tending to our planet requires global communication and cooperation, as well as a universal mission of empathy and stewardship towards our home. This is not something that can be taught simply, but instead it is learned through living and feeling it. SFS gave me this immersive learning experience, which inspired me and planted the seed of stewardship in my heart. I am hopeful that this feeling will only grow stronger throughout my life, and will allow me to do my part in having a positive impact on our world. I am indebted to SFS for this invaluable gift.