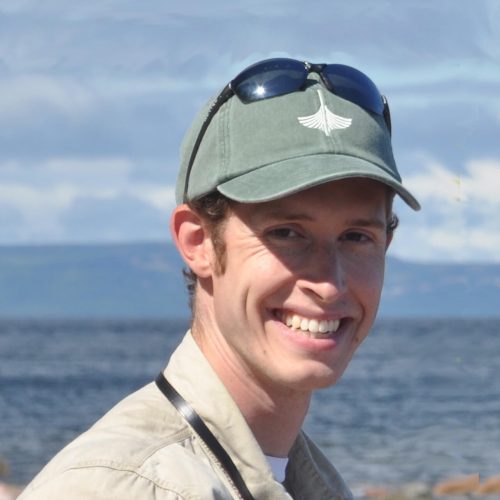 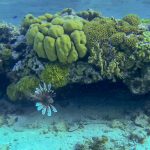 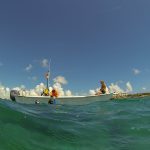 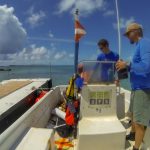 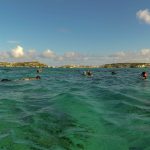 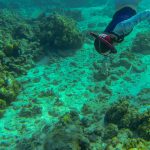 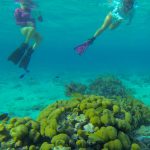 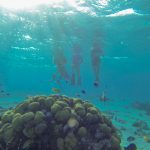 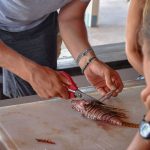 Have the Reef Lions Returned?

In the Principles of Marine Resource Management course, which I lead here at the Center for Marine Resource Studies (CMRS) in the Turks and Caicos Islands (TCI), we have been busy learning about fisheries stock assessment and sustainability this first month of the semester. And, we’ve now reached the point where we are ready to put these new skills to use! So, we are transitioning into more and more fieldwork, and everyone was excited to kick things off last week with a survey focused on one of the region’s most famous invasive predators: lionfish. 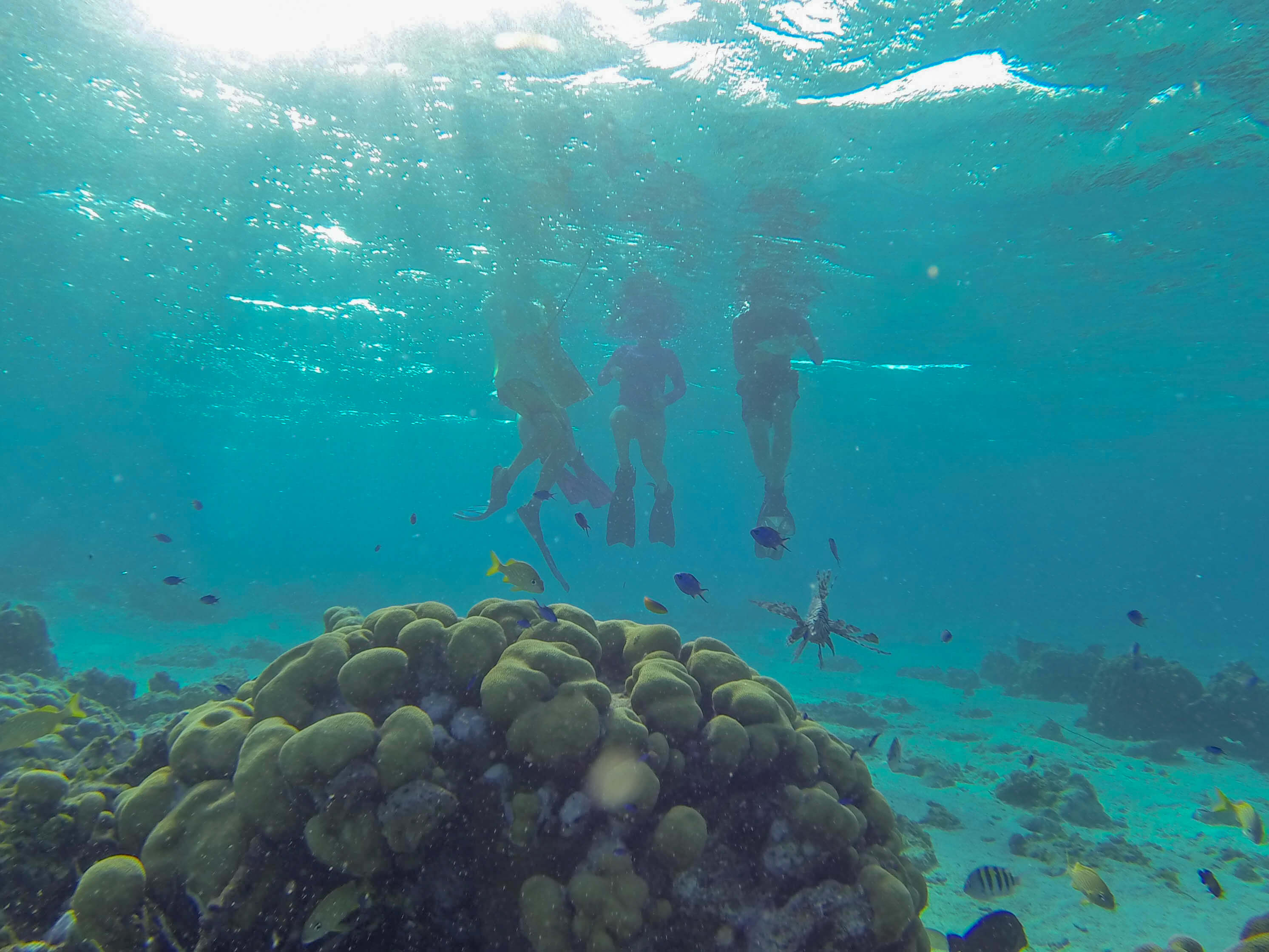 Lionfish at the reef

Aptly named, lionfish (Pterois species) are native to the Indo-Pacific region, where they prey on a variety of small fish and invertebrates, and have few natural predators. Two lionfish species (P. volitans and P. miles) became well-established in the western Atlantic in the 1990’s and early 2000’s, likely after escaping from captivity in the southeastern USA. In this region, including in TCI, they’ve slotted into a similar part of the food web as in their native range – consuming a wide variety of prey and experiencing little predation. This predation on native Caribbean fish, along with lionfish’s fast growth and reproductive rates, means they were promptly labeled an invasive species in the region (i.e., a nonnative species with harmful effects), and intensive management efforts began.

Here at the SFS-CMRS, students and staff began conducting surveys for lionfish in about 2009, and found them widely distributed in a variety of habitats. Around this time, control programs also began throughout the Caribbean and in TCI, with management agencies and conservation organizations promoting lionfish fishing and human consumption. They are, indeed, tasty! These fishing programs, and perhaps a variety of other factors, seemed to have reduced lionfish abundance on shallower reefs in many places. Our surveys near South Caicos suggested a similar trend, with fewer lionfish at shallow survey sites in recent years.

But, last year’s hurricanes may have changed this! Anecdotally, we seem to be seeing more lionfish on reefs around South Caicos than were present before the storms.

So, our team of students and staff set out last week to re-start our lionfish surveys to see whether they are once again abundant. We split into four groups, and visited two snorkel and two dive sites to count lionfish and record size, behavior, and habitat use along transects at each site. Everyone did an excellent job putting into practice, for the first time, some of the visual survey methods we recently learned, despite tidal currents and other challenges! 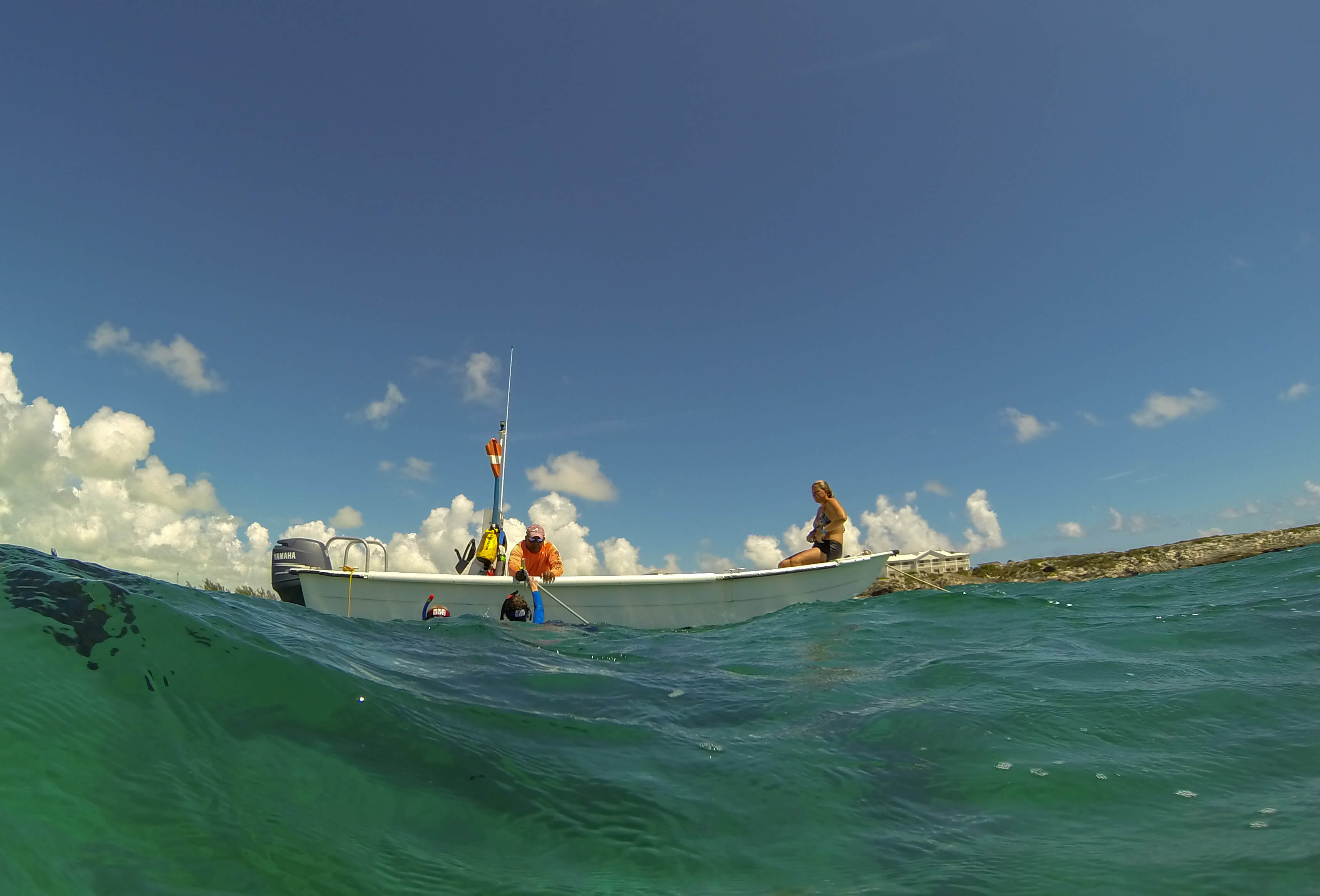 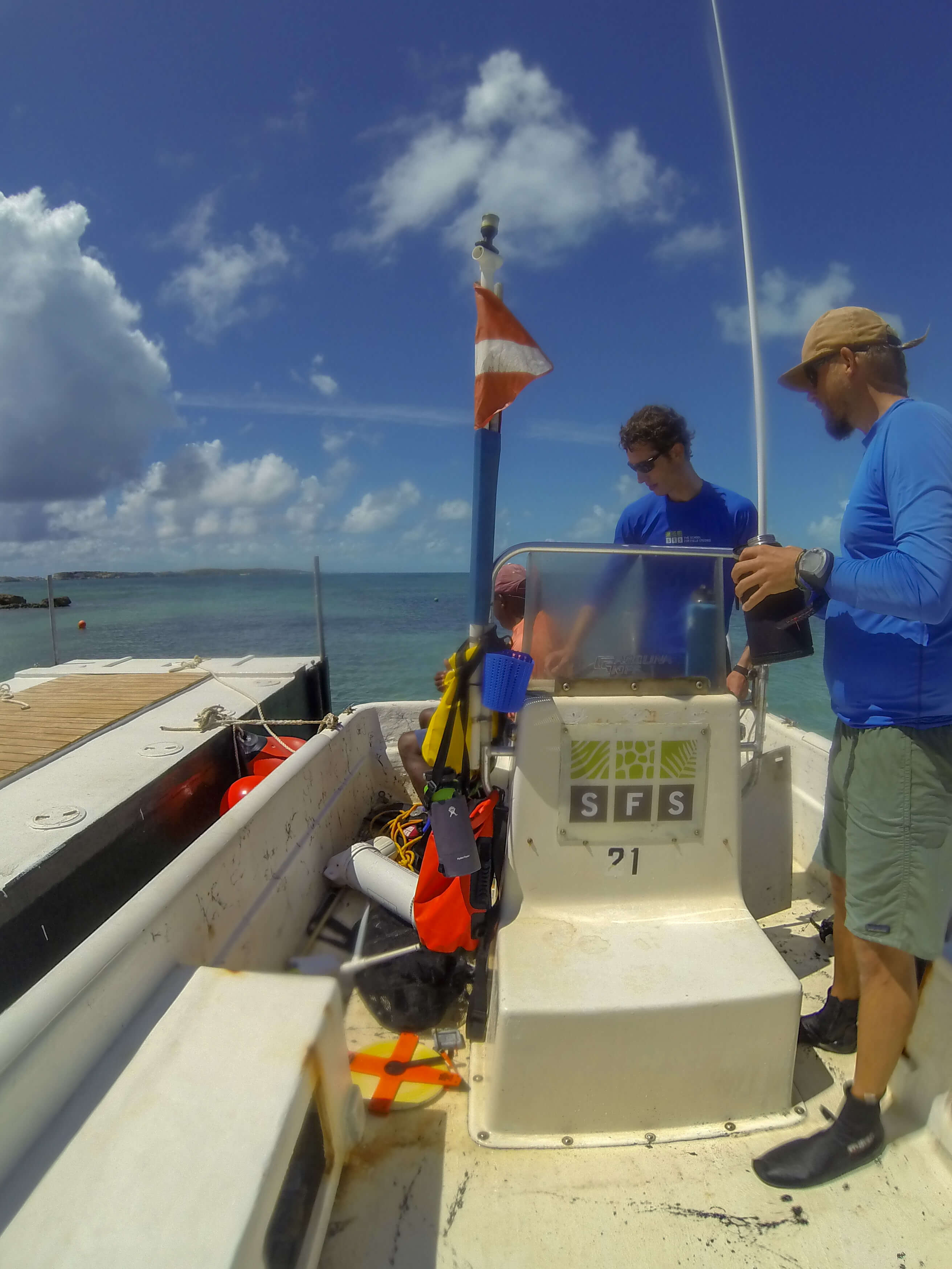 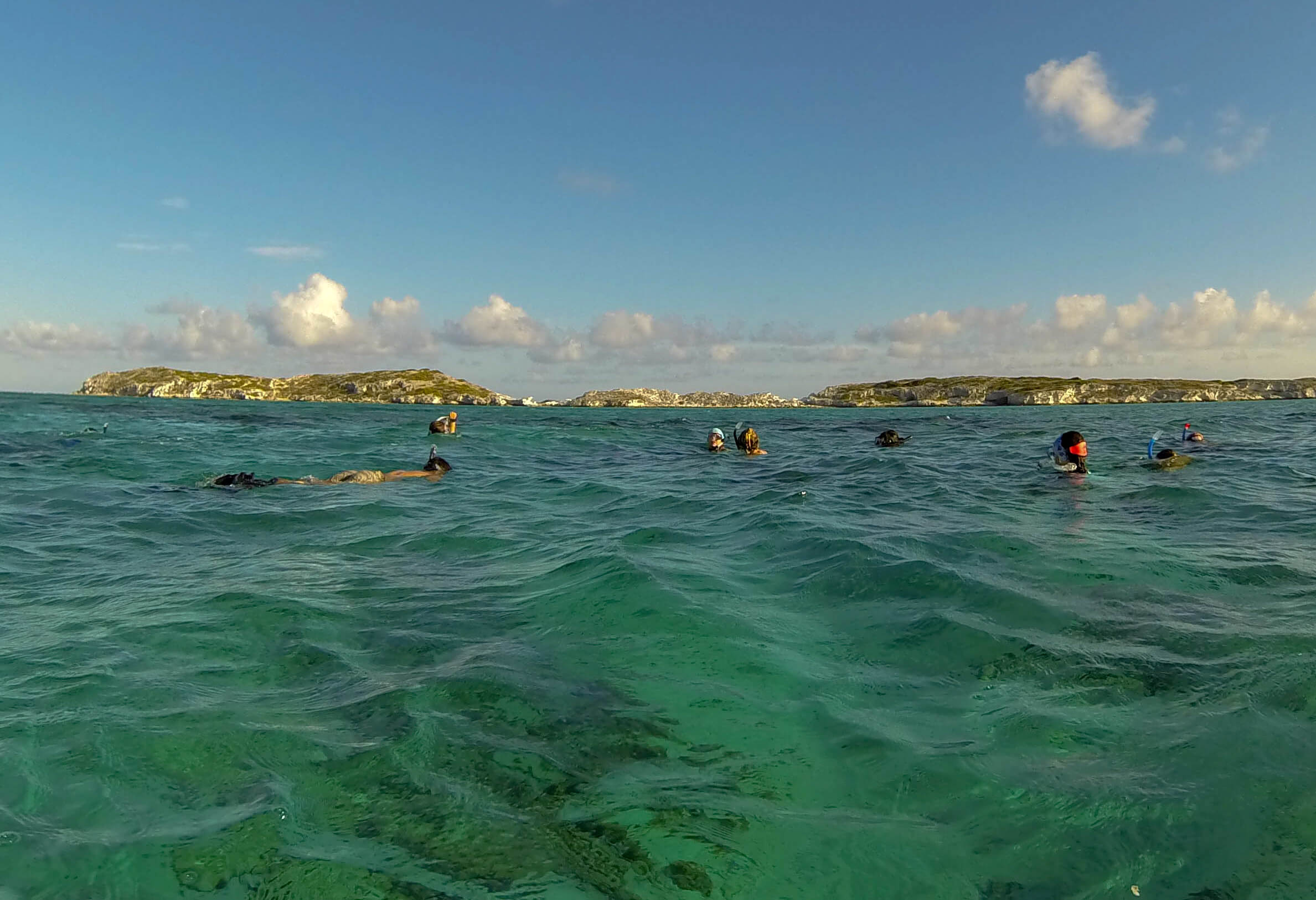 The group at Admirals Aquarium 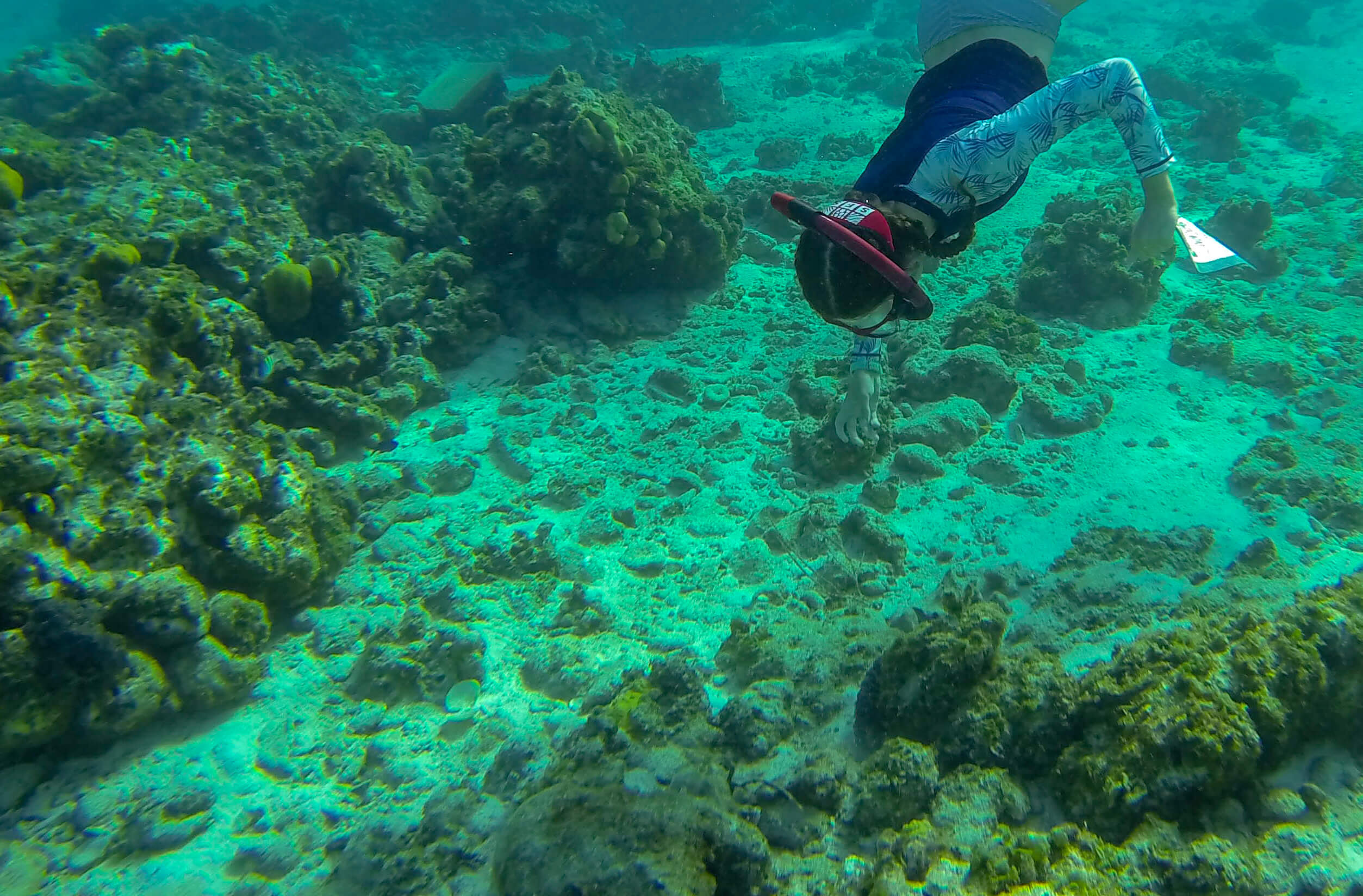 And, what did we find? Lionfish were observed at two of the four sites we visited. The observed fish were medium and larger sized individuals and were indeed at shallower depths than most fish observed in recent years (e.g., 2016, when surveys were last conducted). We were also able to dissect several lionfish caught by staff, and found a variety of small fish in their stomachs. We are now in the process of reviewing the longer-term data, and hope to conduct additional surveys over the next couple months at different sites or different times of the day. Hurricanes have had the unfortunate effect of boosting lionfish populations in some regions (Johnston and Purkis 2015; Smith et al. 2017), and it will be interesting to see whether something similar has happened here! 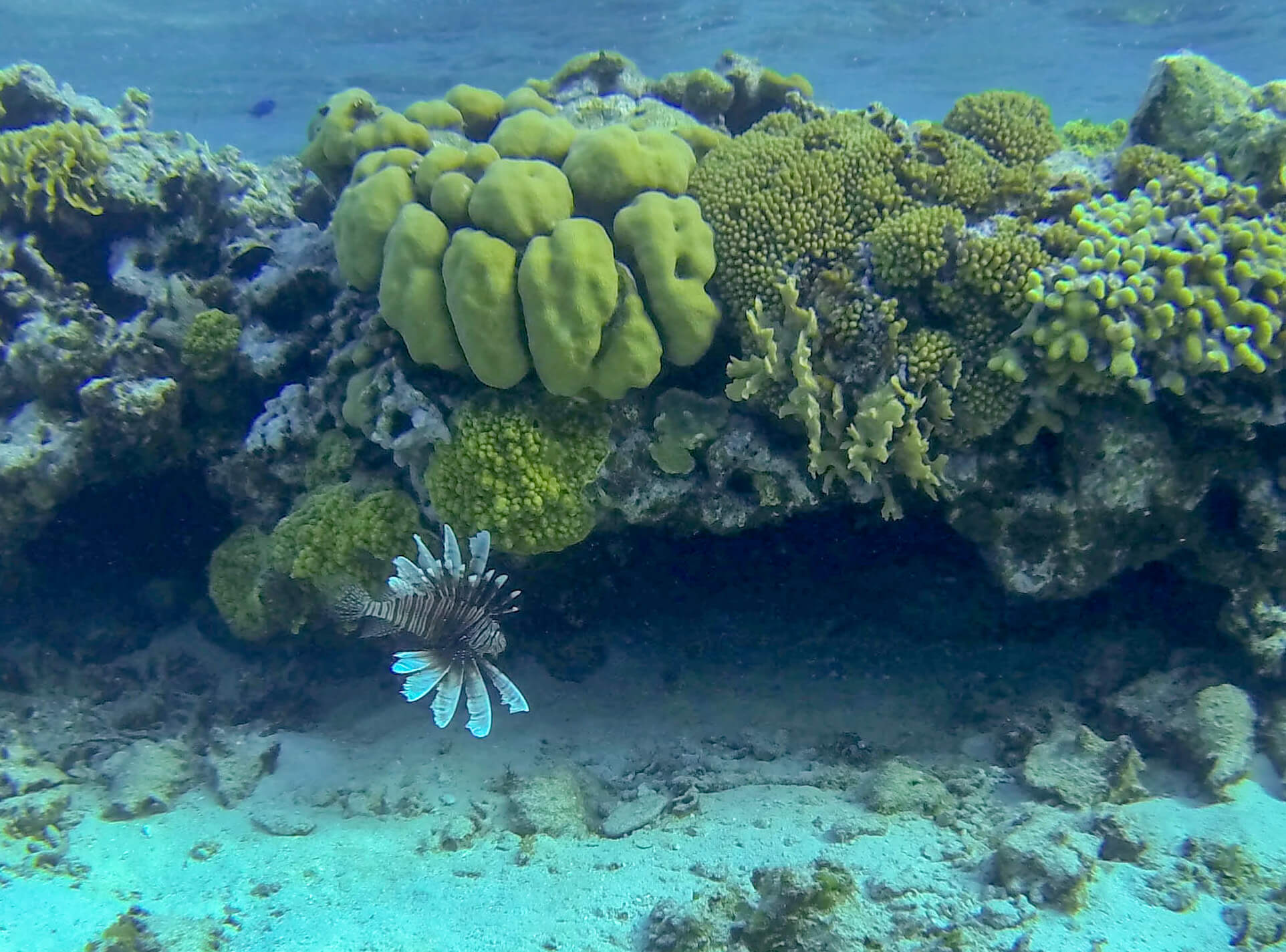 Lionfish at the reef 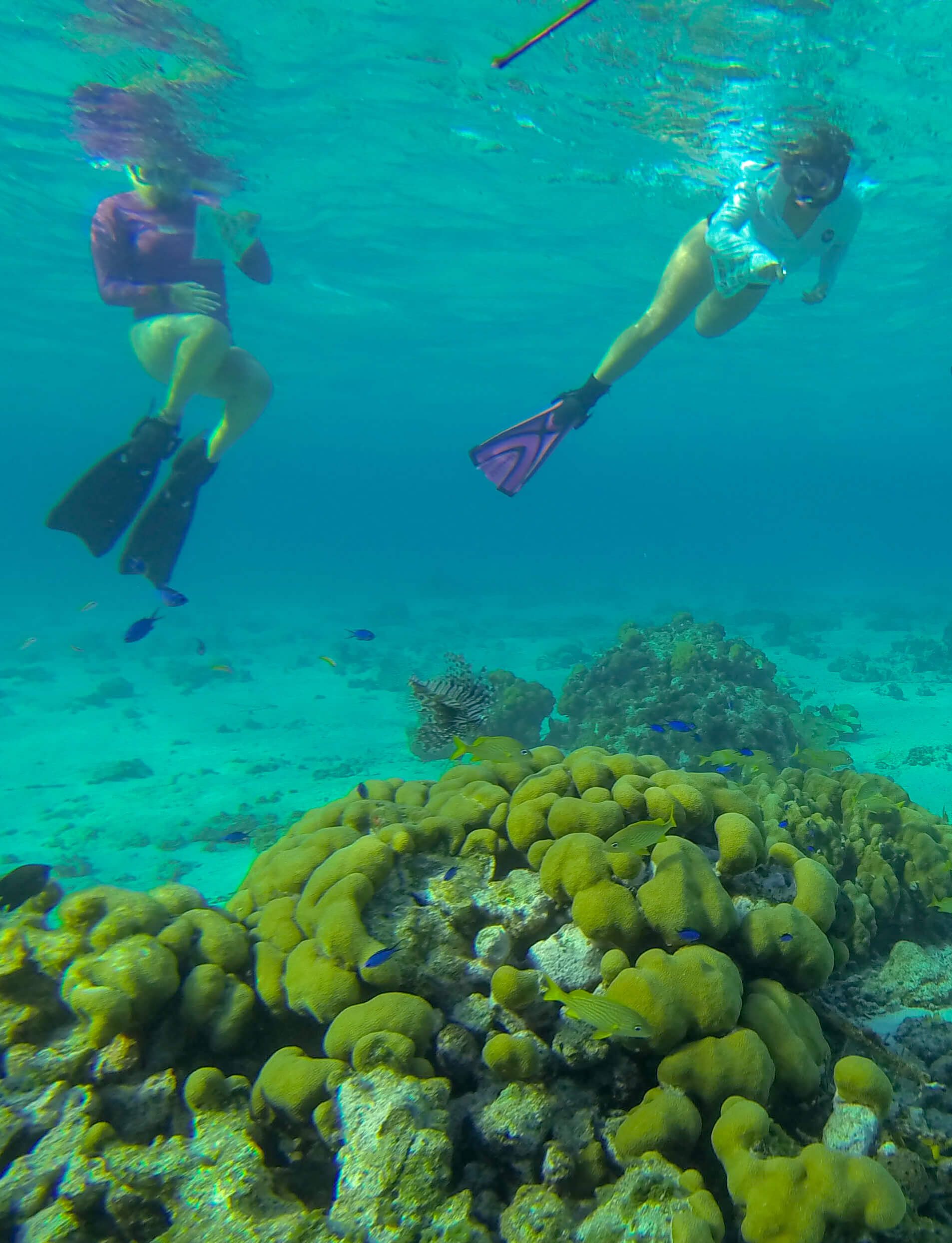 Can you find the lionfish? 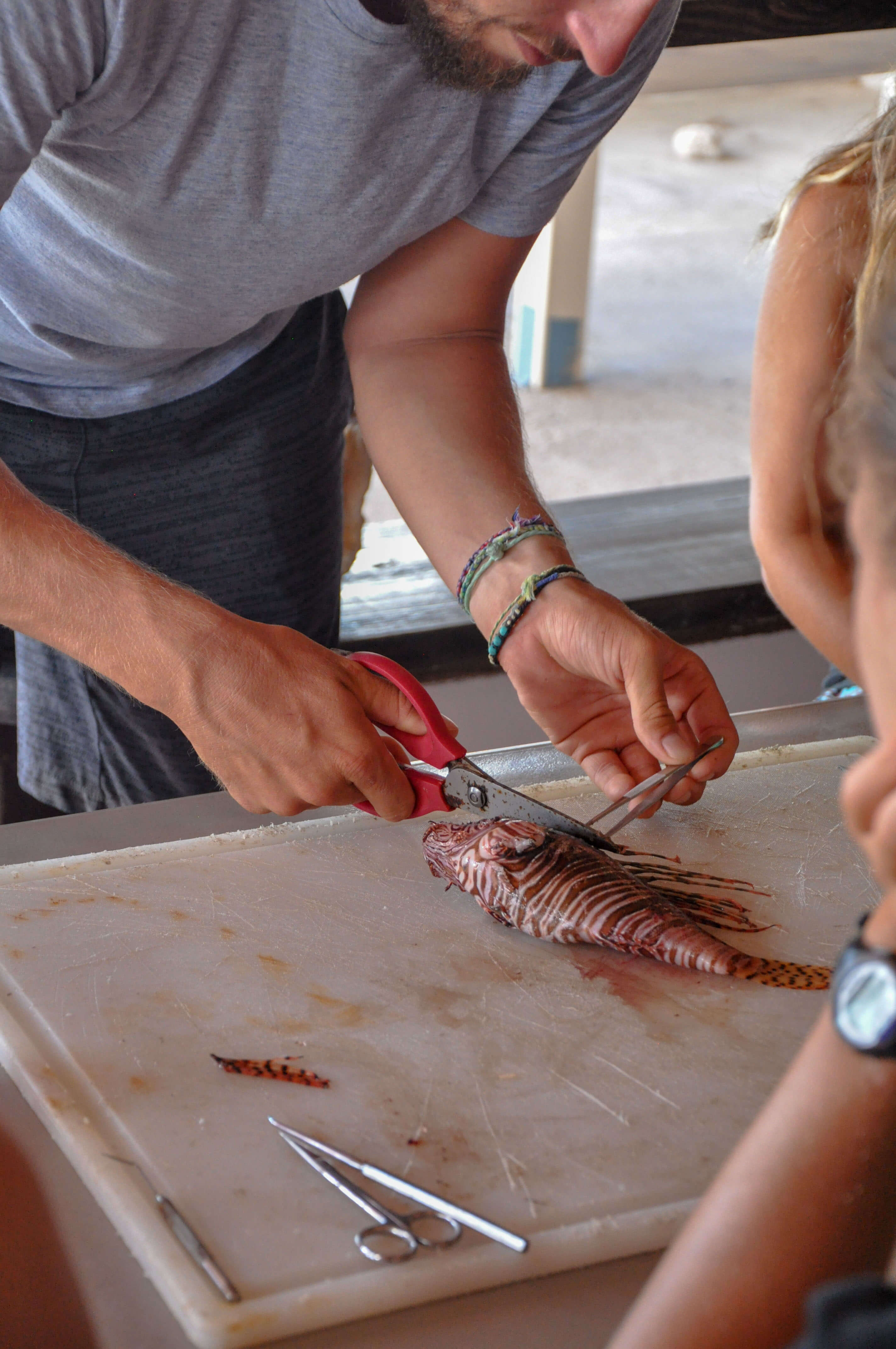 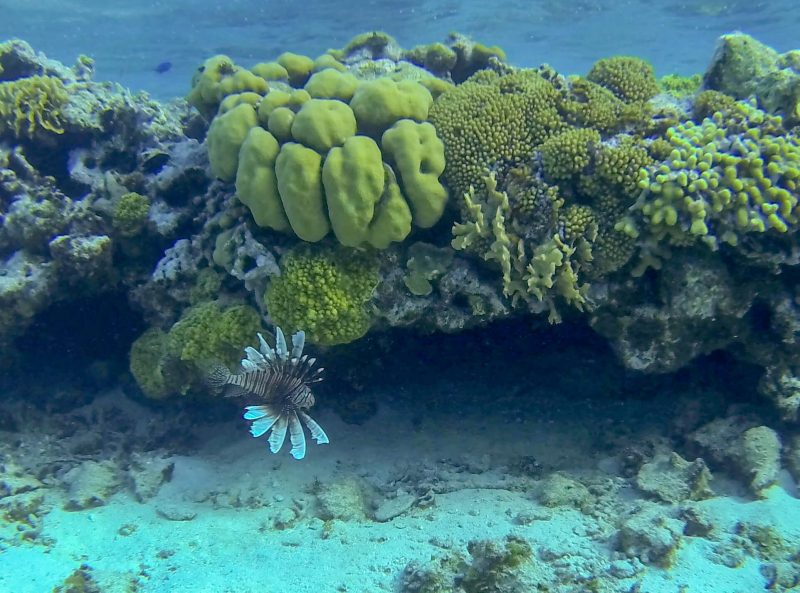 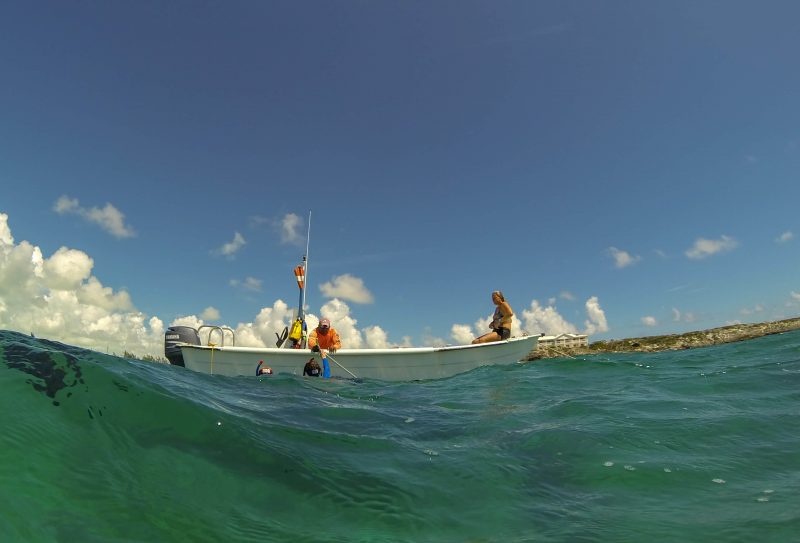 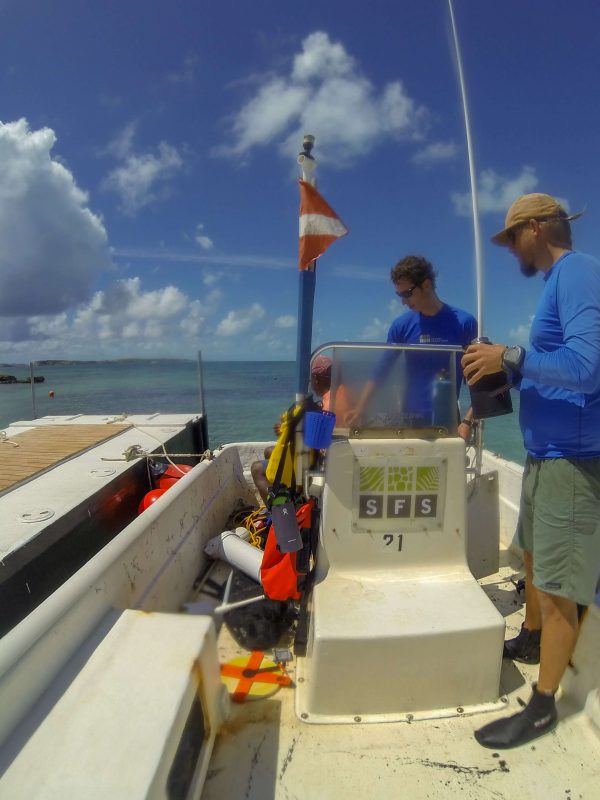 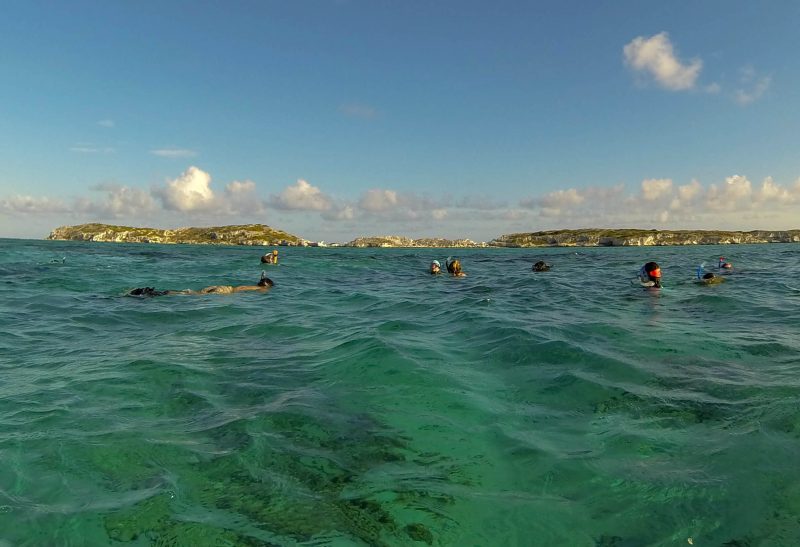 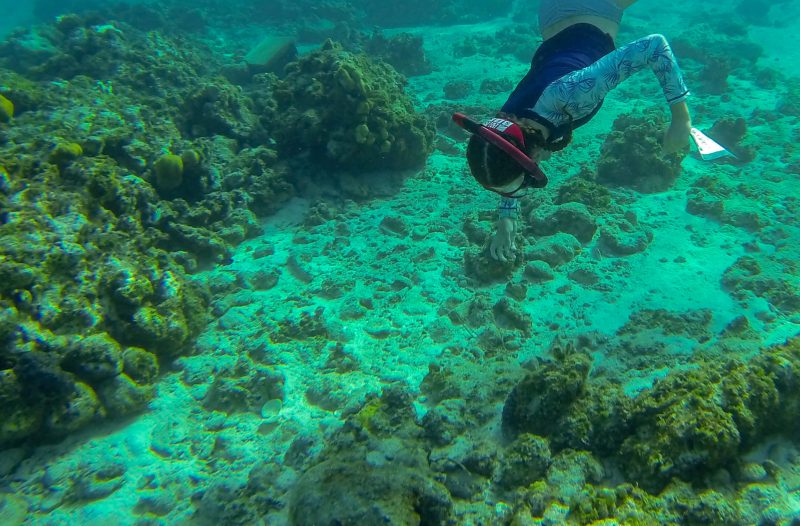 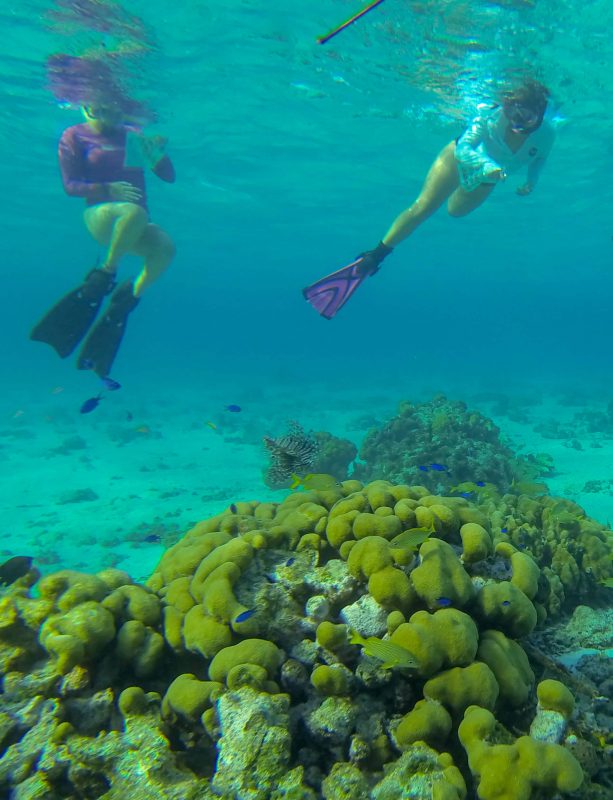 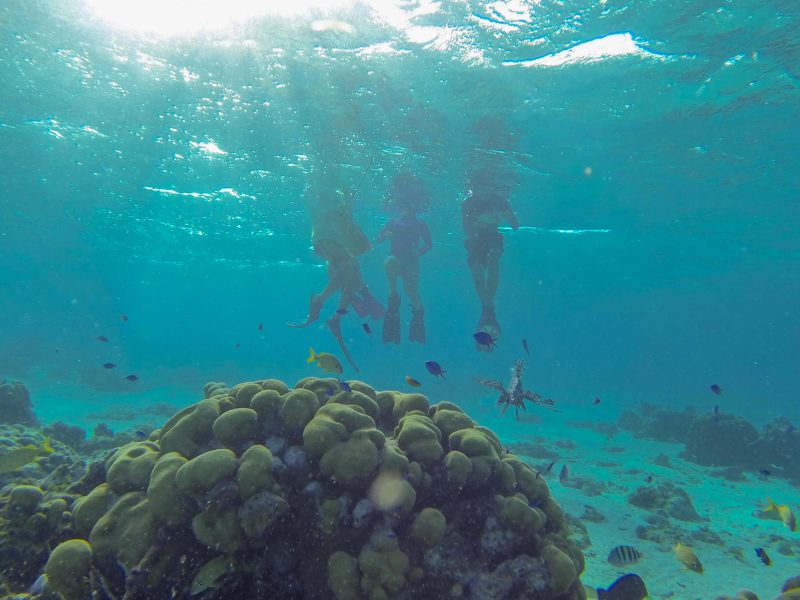 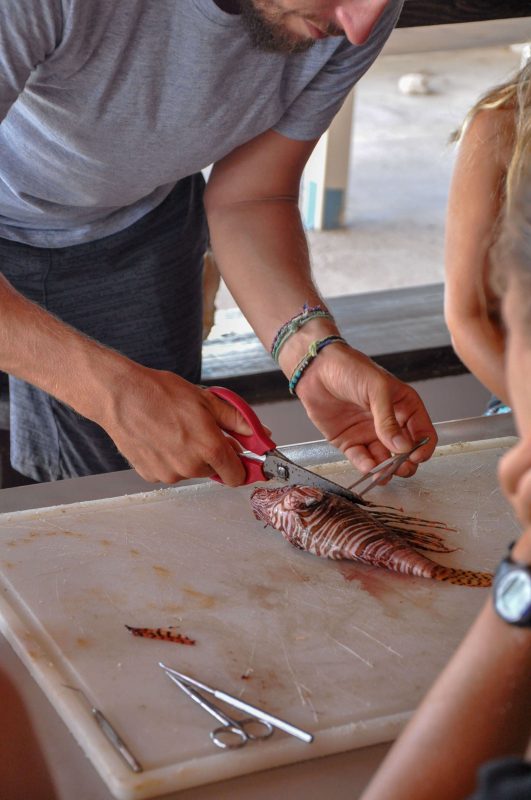