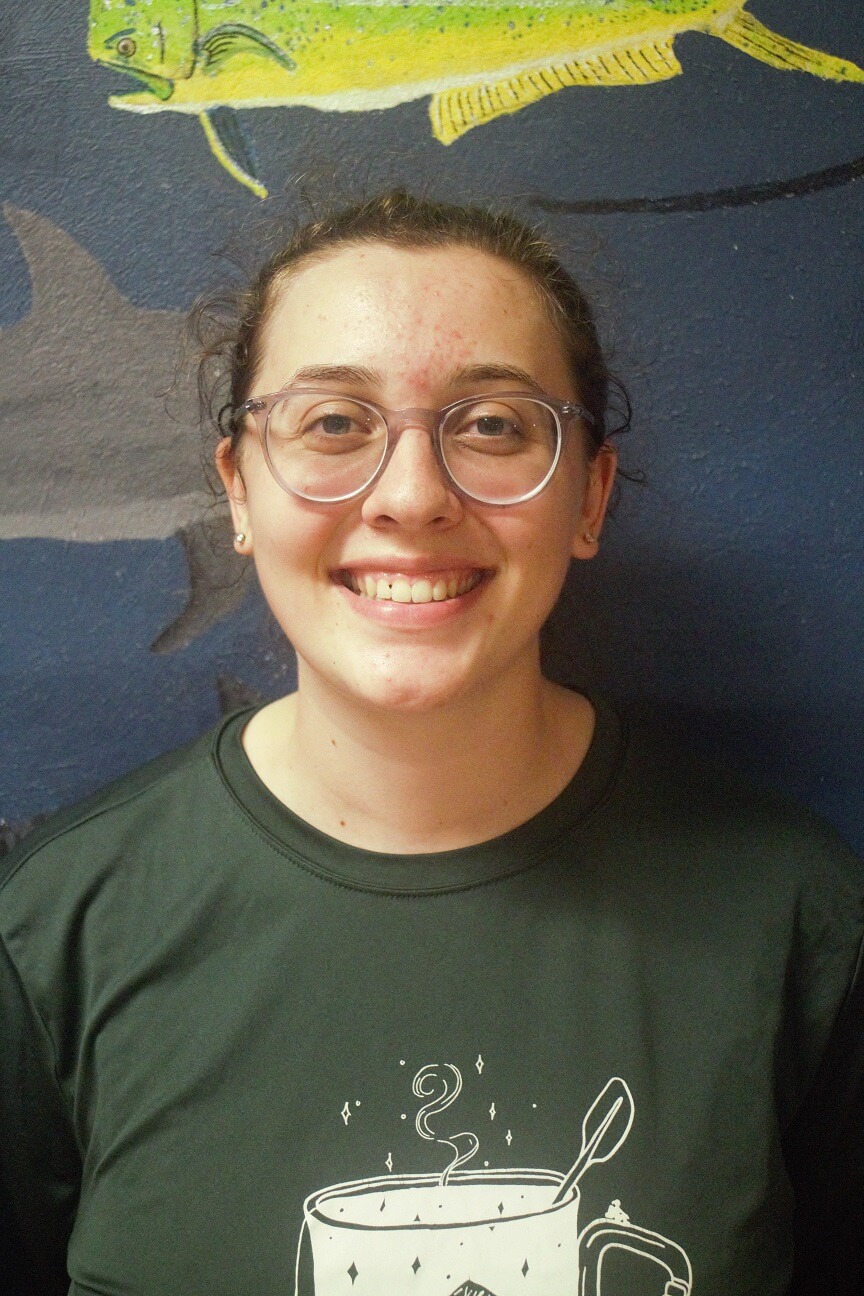 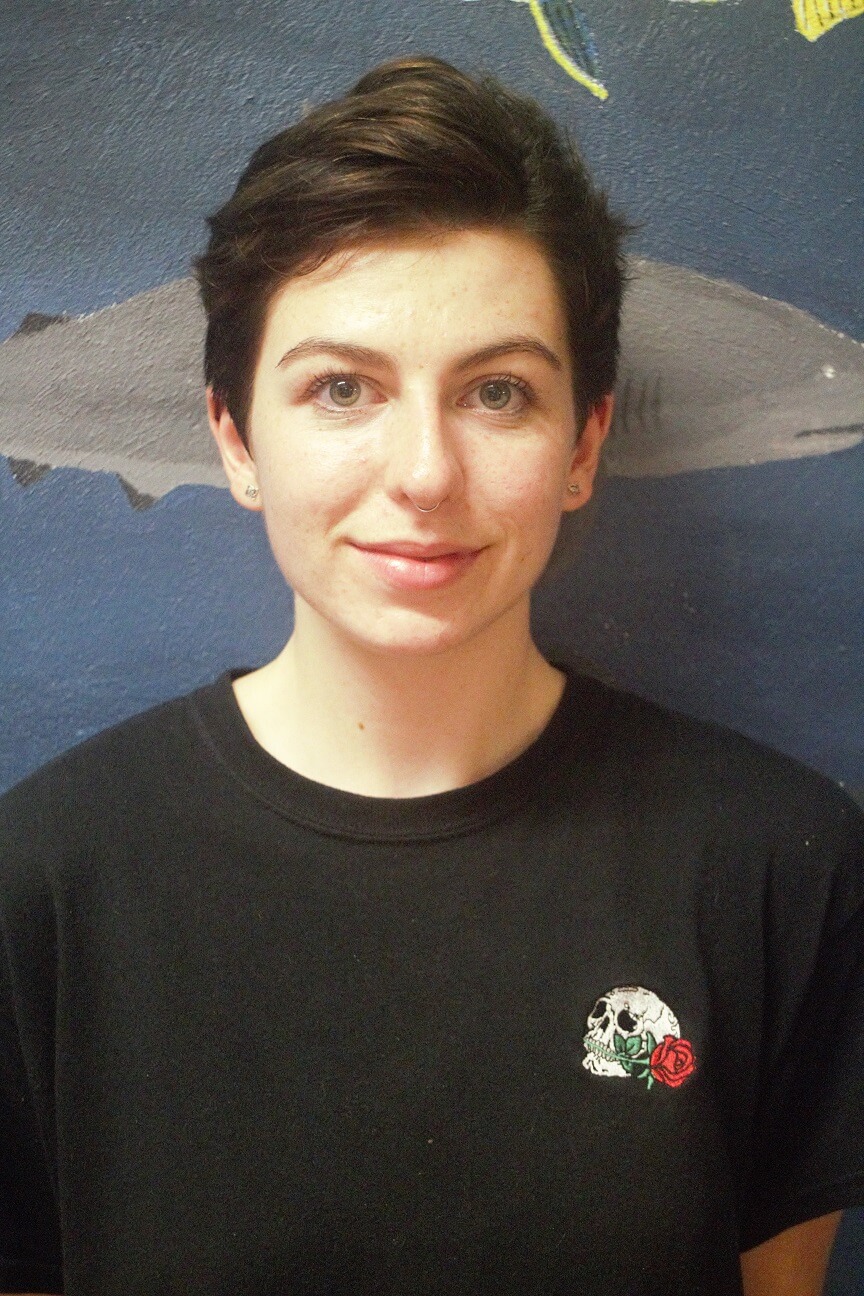 Spooky Stories from the Turks and Caicos Islands

In the spirit of Halloween, we’ve decided to share a couple “spooky” stories from our time here in the Turks and Caicos Islands. The tales that you are about to read are all true…

Close Encounter of the Fishy Kind

It was two o’clock in the afternoon and it could not have been a better day on the water. We were only two and a half weeks into the semester, and we were just starting to get used to life on South Caicos. It started out like any typical dive. We got our SCUBA gear ready, did our buddy checks, and took one of our boats out to the Spanish Chain dive site. Once we got to the site, we made our final checks and then backward rolled off the boat into the clear blue water.

As all the divers descended towards the sea floor, I noticed that it was a little murkier than usual; as we looked around, all we could see was blue. Everyone was about to reach the bottom when a large shadow emerged behind the divers in front of me. As the shadow came more into focus, I realized that it was a 12-foot hammerhead shark. Everyone around me was pointing and we all watched as it drew closer and closer to our circle of divers. The shark wasn’t aggressive – it just seemed curious and cautious around us. Our Waterfront Assistant originally had her back to the shark. When she turned around the hammerhead got spooked and swam off into the distance; we didn’t see it again for the rest of the dive.

Everyone was so excited about what we had just seen, and immediately after the shark disappeared from sight, we all started dancing around underwater.This was definitely one of the coolest interactions that I’ve ever had diving in the Turks and Caicos. 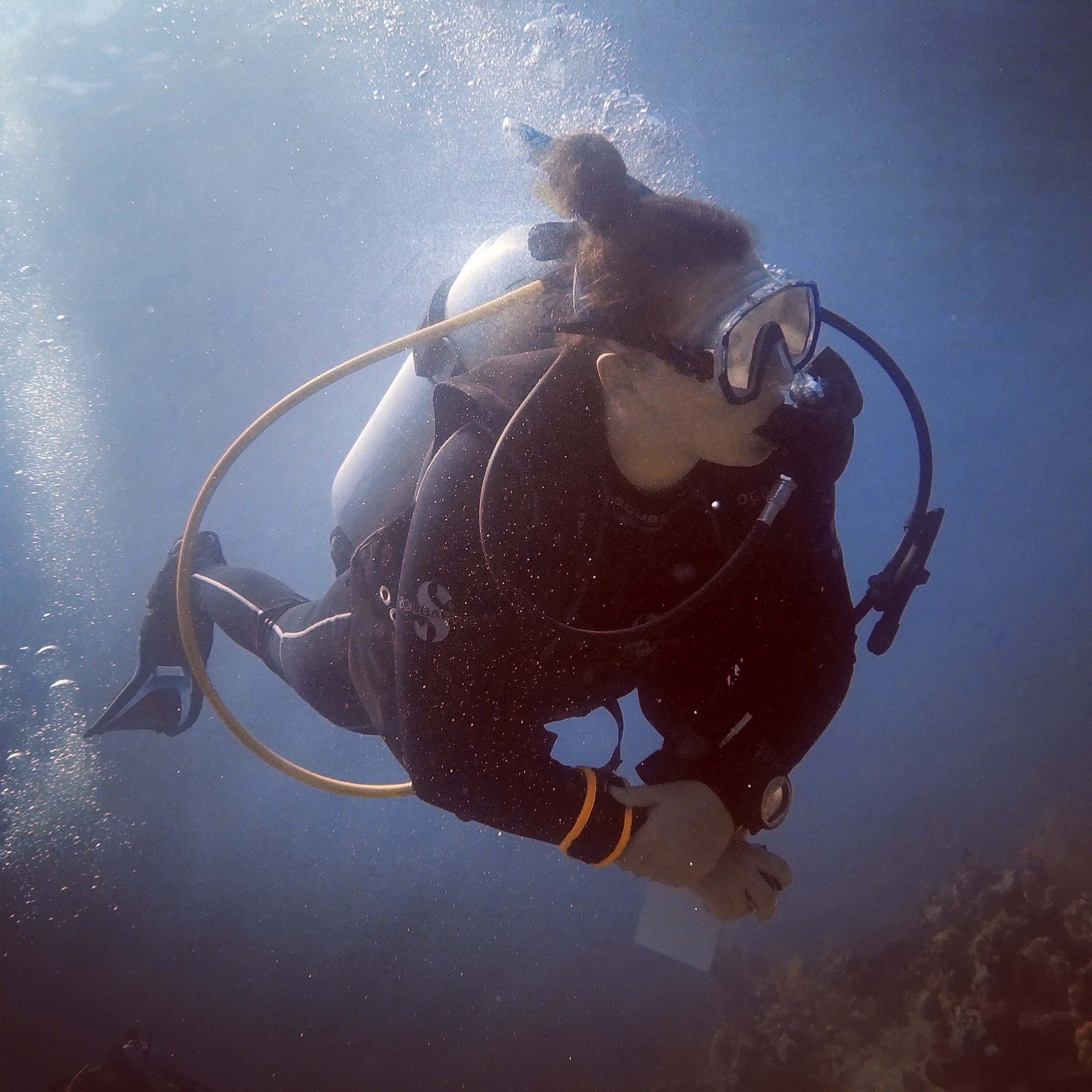 Emma, SCUBA diving off the coast of South Caicos 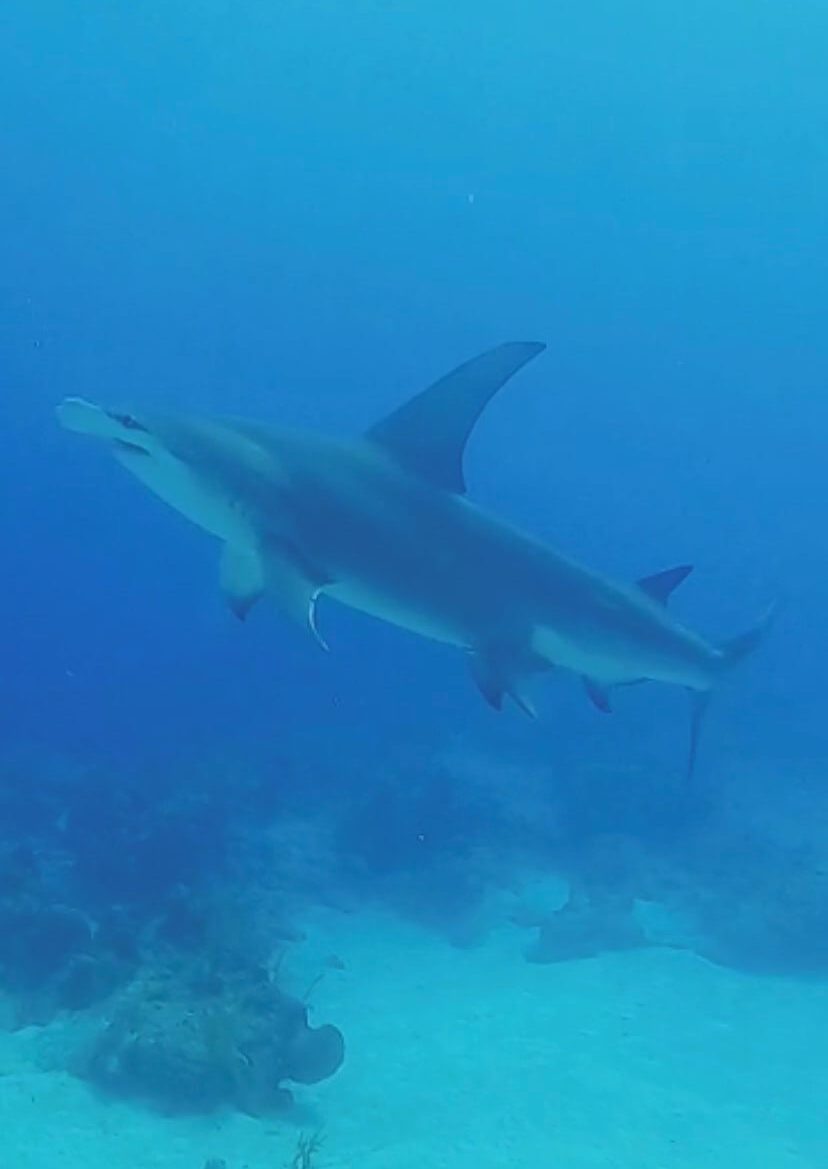 The beautiful hammerhead shark that surprised us on the dive

Descending into the Darkness

As part of a field trip that our class went on to explore some of the other islands in the Turks and Caicos, we took a tour of the Conch Bar Caves in Middle Caicos. Immediately after entering the mouth of the cave, the blinding sunlight shrinks away, and you experience the dark, dimly lit cave. The stalagmites, which come up from the floor, and stalactites, which hang from the ceiling, line the walls and remind you of the history of the earth you are on. Rainwater that had soaked through the limestone caves dripped slowly from the stalactites into murky pools of water in the cracks woven throughout the cave. Our guide from the TCI National Trust informed us how to calculate how many centuries it had probably taken for them to form. We had to be extra cautious as we walked along, or else we might fall into a crevice and never be seen again.

Eventually we were surrounded by complete darkness with only our flashlight as our guides. Every now and then the squeaks of small creatures could be heard above our heads and shadows could be seen fluttering by – bats. We reached the heart of the caves and all huddled around a wall as our guide instructed us to turn off our flashlights. We were hoping to see light bouncing off the limestone walls, but nothing appeared, so we ended up simply standing in a pitch-black room, quietly trying not to slip and fall on each other. It was a lovely but a bit haunting. 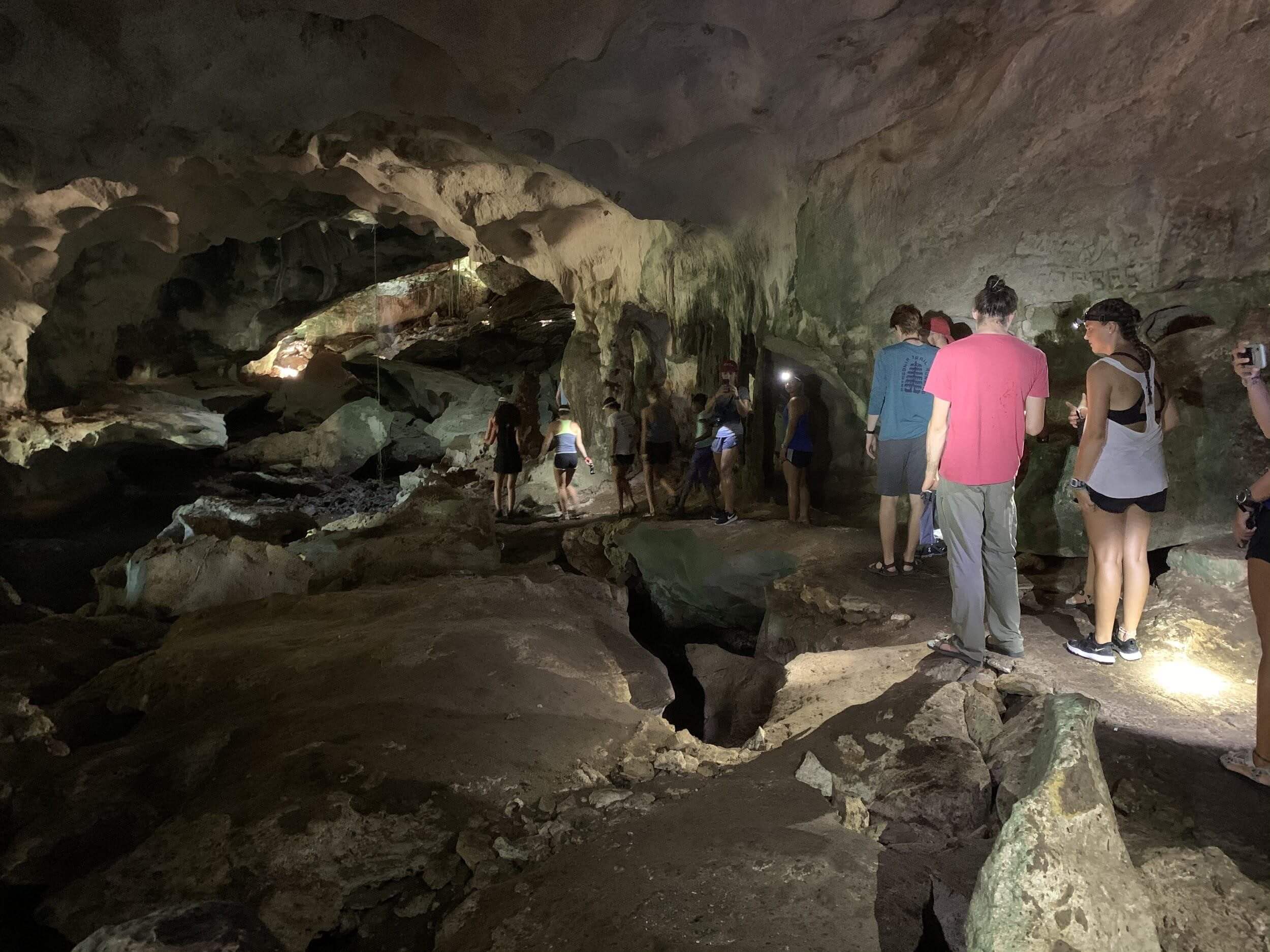 I Fell into Your Arms: A “Spooky” Interpretation of an Encounter with a Great Barracuda

The day was clear and hot, like most every day on South Caicos. The beach was beautiful, right outside the deserted East Bay resort, closed for the hurricane season. Its pool area, up the beach a bit, was supposed to be a second home to those looking to soak up some sun but was ominously deserted. It looked to us like a place lost to the ravages of time. Emma and I had been placed on the same Field Exercise group. All we had to do was swim out from the shore laying a transect tape out into the ocean and record invertebrates in the area. This was simple, so simple we almost couldn’t mess up. And it went smoothly too, for the most part; the first two transects were fine, but in the water out there we couldn’t help but feel a bit out of place. The open ocean at our back, the constant unknown creeping up on us the moment we turn away. We took the final transect all the way out, and then I paused on the surface as a Waterfront Assistant called out my name. He drew my attention to the absolute largest fish I had ever seen – a great barracuda, jet black, with its narrow head and cold, calculating eyes surveying our every action. We had definitely interrupted what it was doing.

I told Emma about the fish and then we watched as it inspected the transect tape with its sharp teeth. We waited for it to swim away, satisfied with its examination, but no – it stayed on, intrigued by our colorful fins. We swam a few meters towards shore, hoping the fish would continue on its way. The barracuda swam off and we went back to surveying. But there was that lingering feeling of being watched.

Minutes later, out of the hazy blue, a familiar, curious dark head appeared in the field of view of my goggles. Slightly spooked by the surprise appearance of – still – the largest fish I’d ever seen, I swam towards Emma, who caught me in her arms. Together we kicked backwards until it was out of view again. We surveyed the water for the inquisitive fish trailing behind us and it slowly emerged, lazily going about its fishy business. This time, though, we were together. Or so I thought. When I turned around, I saw Emma’s feet kicking away. I caught up to her and together, we swam back to shore, imagining we were still being followed by our persistently curious fishy friend.

(For the record, despite their appearance and pointy teeth, barracuda are not considered dangerous and have never posed a threat to any students.) 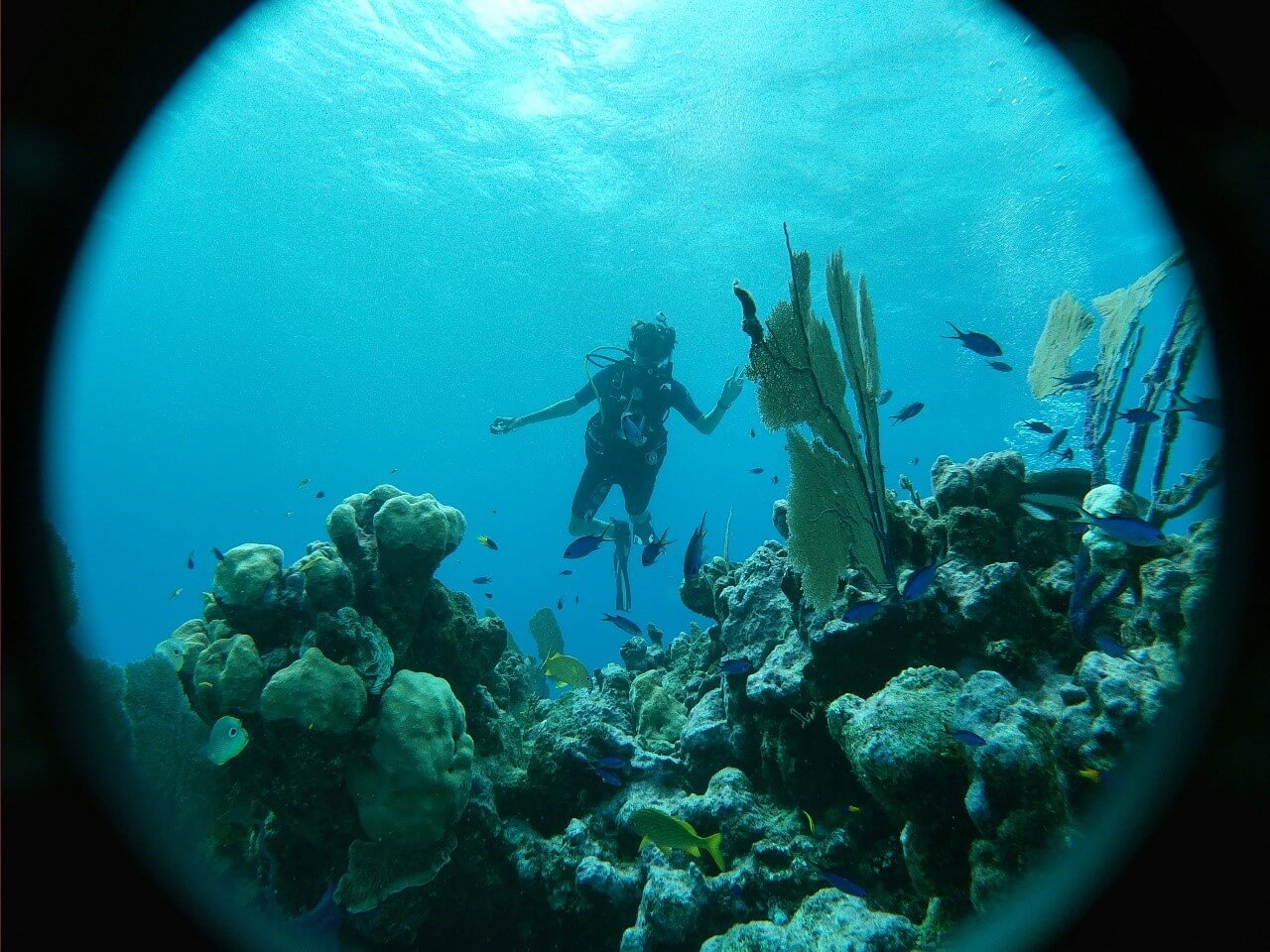 Madi, SCUBA diving off a reef near South Caicos 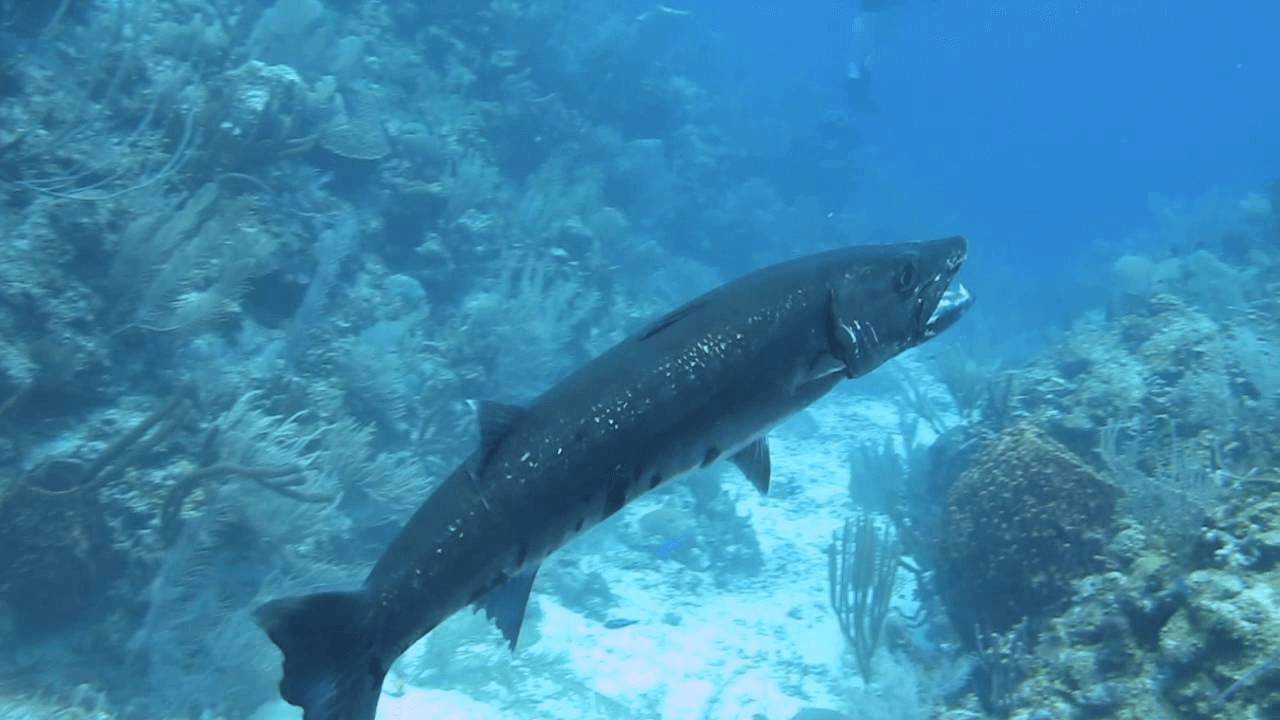