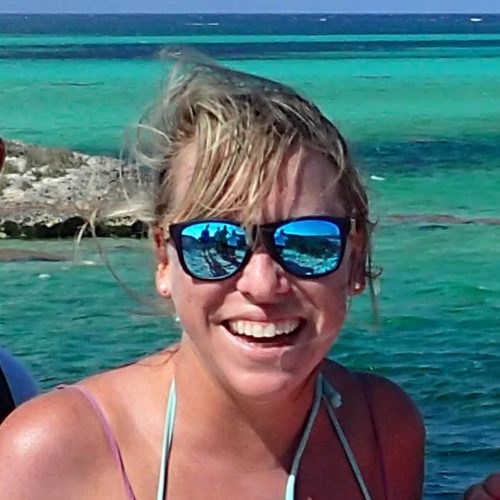 Directed research is underway here in the Turks and Caicos! Students have now finished exams and wrapped up classes, and we will be spending all week in the field collecting data. There are six projects being conducted covering topics such as coral disease, conch and fish behavior, conch and fish abundance, and sargassum impacts on seagrass beds. Below is a brief look at these projects and our hard-working students…

Stony Coral Tissue Loss Disease Group
Stony coral tissue loss disease (SCTLD) is a fast -lethal coral disease that affects over 20 species of stony corals. Diseased corals often have multiple lesions that grow quickly. It is a highly prevalent disease with 66-100% of surveyed corals in Florida affected by it. The disease was first reported in 2014 in Florida and has spread across the entire Florida reef track since. Lately, it has been reported elsewhere in the Caribbean, including the Turks and Caicos. SCTLD was first observed on South Caicos reefs in January 2019 and identified as such in February/March 2019. Last spring, monitoring of the disease began including both monitoring of prevalence of the disease and speed of spread across single colonies. The results so far show that we have a large variety of coral species affected by SCTLD here on South Caicos.

This DR group is monitoring the succession and spread of SCTLD in South Caicos waters. Student researchers are analyzing which coral species are most affected over time by tagging and tracking both healthy and diseased corals. They are also filming coral colonies and creating a 3D model of the colonies using computer software. This model will make it possible to measure the surface area affected by the disease in a novel manner and track its growth over time. 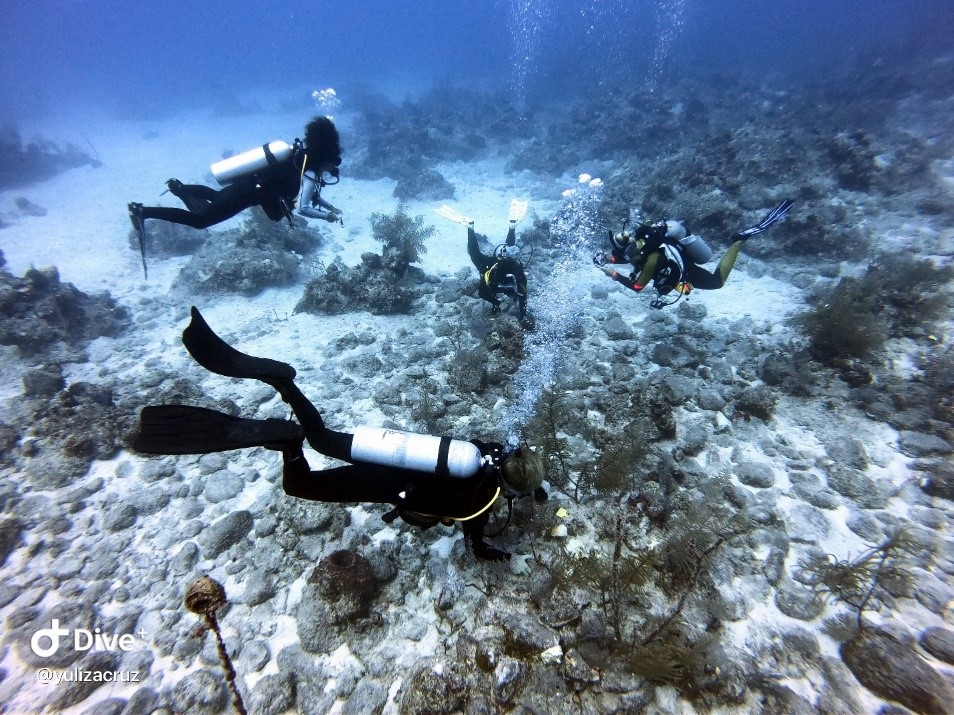 Black-Spot Syndrome (BSS) Group
A large proportion of coral reef fishes in the Caribbean have exhibited ‘black-spot syndrome’ (BSS), a condition characterized by conspicuous black spots on the fins and body. Growing evidence highlights the importance of marine pathogens in affecting host population dynamics and even structuring entire ecological communities. Parasites can affect ecological outcomes and can play a role in the commercial value of fisheries and are therefore often utilized as bioindicators of pollution. Transmission between host species often depends on predation, parasite-induced alterations in host behavior or appearance that increase predation risk may be selectively favored. Such parasite-induced changes emphasize the importance of parasite-host dynamics not just for individual hosts, but also for food web structure, energy flow, and species composition. This DR group is measuring the effects of BSS on the behavior of ocean surgeonfish. The students are testing for differences in behavior of fish with and without visible infections of black spot. 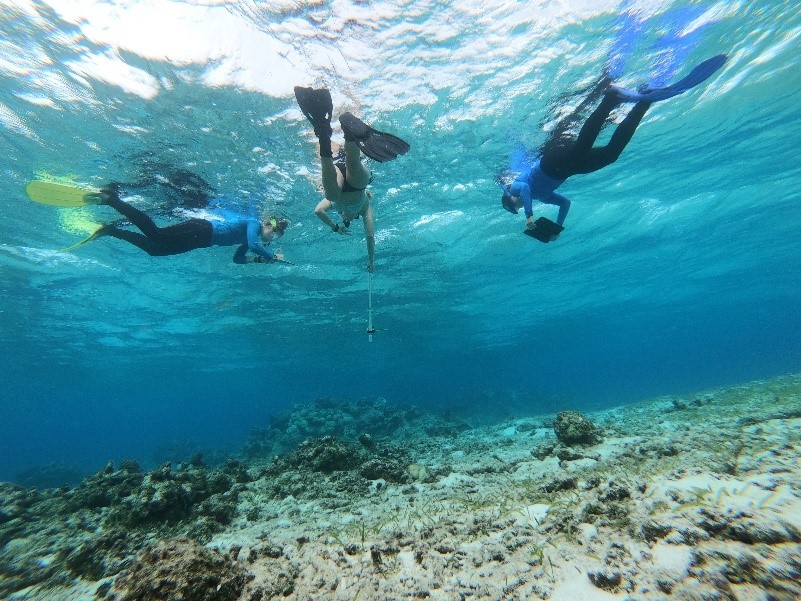 Conch Abundance Group and Conch Behavior Group
Mollusk species commonly referred to as conch or whelk are harvested by fishers in a number of places around the world and are especially important fisheries in parts of Asia and the Americas. Queen conch (Lobatus gigas) have been collected and used for many centuries in the Caribbean, where they play an important role in regional culture and food. International trade of queen conch is now regulated by the Convention on the International Trade in Endangered Species because wild populations have declined in recent decades. Queen conch remain an important fishery within the Turks and Caicos Islands (TCI), where they are both exported and consumed locally, but fishing catch and effort data suggest TCI queen conch populations may be declining. In addition, according to local superstition, knocked conch middens (piles of discarded shells) may be causing conch to change their behavior. 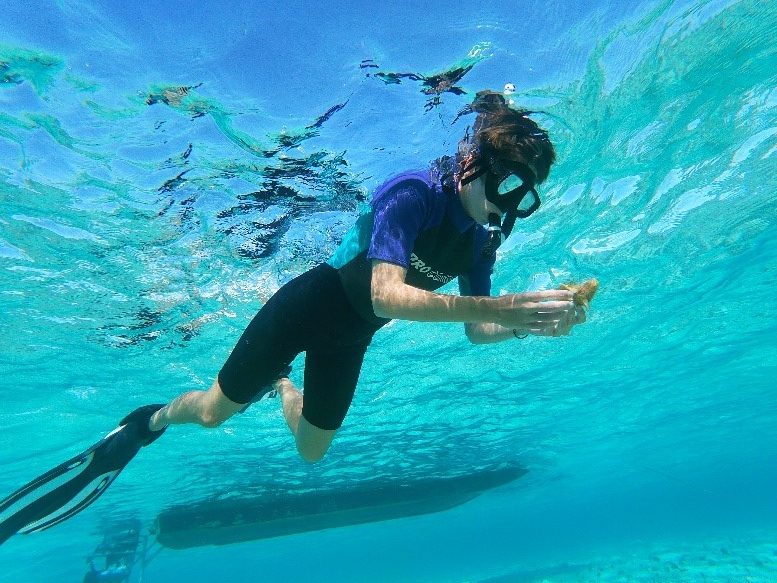 The conch abundance group is surveying inside and outside a nearby marine protected area (MPA) to determine the health and status of the queen conch population. Students are sampling conch along transects at randomly chosen points within the region to get an idea of the geographical distribution of the population. The compiled dataset which will result from this project will be useful for regional fisheries managers.

The conch behavior group is running experiments to determine whether queen conch change their behavior in the presence of knocked conch shells. Students are running both long-term experiments inside the marine protected area over several weeks, as well as short-term experiments lasting around an hour per treatment. Results of this experiment can help fishers and managers better understand whether middens of knocked conch shells are detrimental to the health of the local conch fishery. 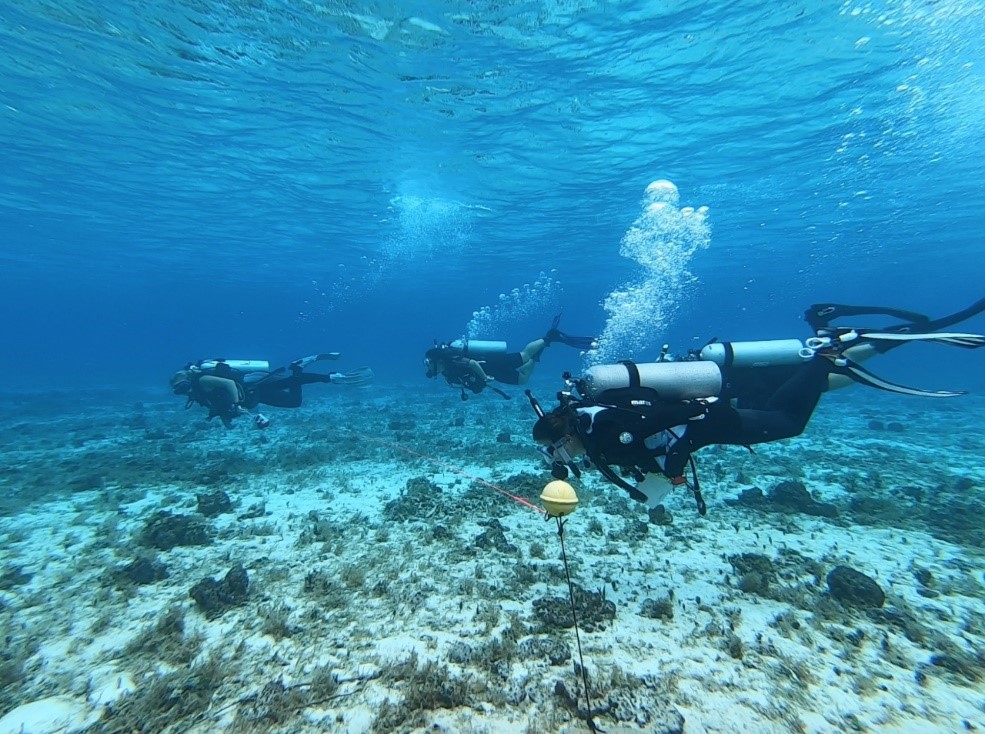 Fish Abundance Group
Reef fish play an important role in community dynamics of coral reefs, keeping reefs healthy, but are also important for local fishery economy. The goal of this DR study is to assess the abundance, size and distribution of fish to understand changes in reef dynamics and help understand how humans affect fish populations through activities such as fishing. The main indicators this group is investigating are fish diversity, abundance and biomass, and key fish species. This group is assessing these indicators using Baited Remote Underwater Video’s (BRUV), dock landing data, and roving diver methods. 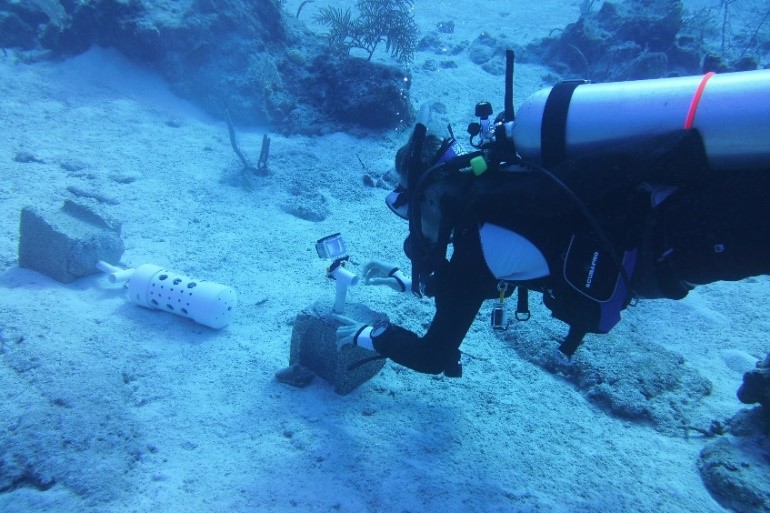 Student researcher setting up a BRUV

Sargassum Group
Sargassum are free swimming algae species that travel with the currents. While they are an important habitat when floating in the open ocean, they can negatively affect coastlines if they wash up in large quantities. Sargassum blooms have become more frequent, and severe within the Caribbean. These golden tides wash up on many Caribbean beaches, including the Turks and Caicos Islands, where they decompose slowly leading to increased turbidity and nutrients in the surrounding waters. On South Caicos, these bays are often habitats to seagrass beds, which are very sensitive to turbidity, decreased light levels and nutrient enrichments. Students have set up experiments in the water to investigate how floating sargassum and thick layers of decomposing sargassum trapped between seagrass blades affect Thalassia testudinum growth and survival. In addition, this group is monitoring seagrass beds around South Caicos, as well as interviewing South Caicos residents about their interactions with sargassum and the potential for sargassum to be produced as various consumable products. 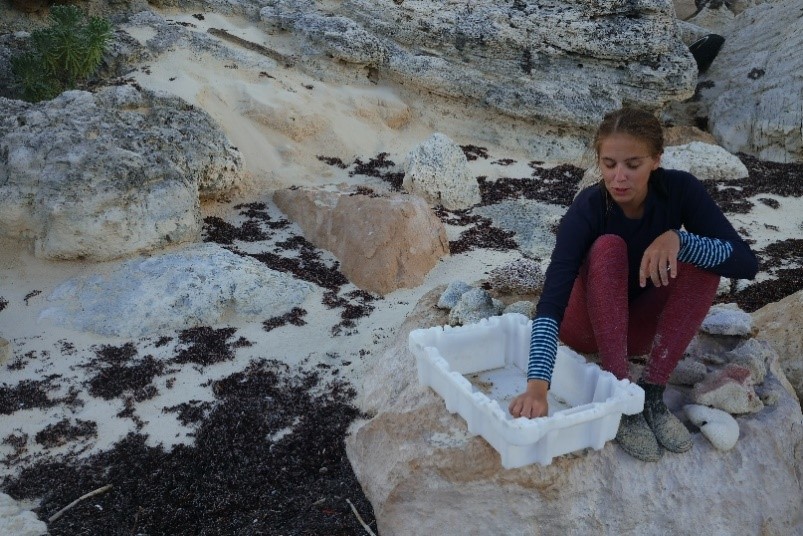