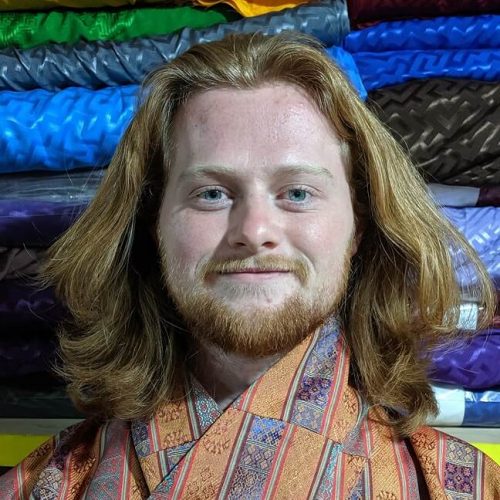 Conservation at Its Finest

A common and unfortunate aspect of travel is exhaustion. Whenever abroad, there tends to be a perpetual state of it. So, when told to get up at 4 a.m., one would expect mutual dread throughout the group, yet in this particular case, all 24 of us were quite ecstatic for the early morning. We had arrived in the mystical wetland valley known as Phobjikha the day before and were anticipating an extraordinary event. 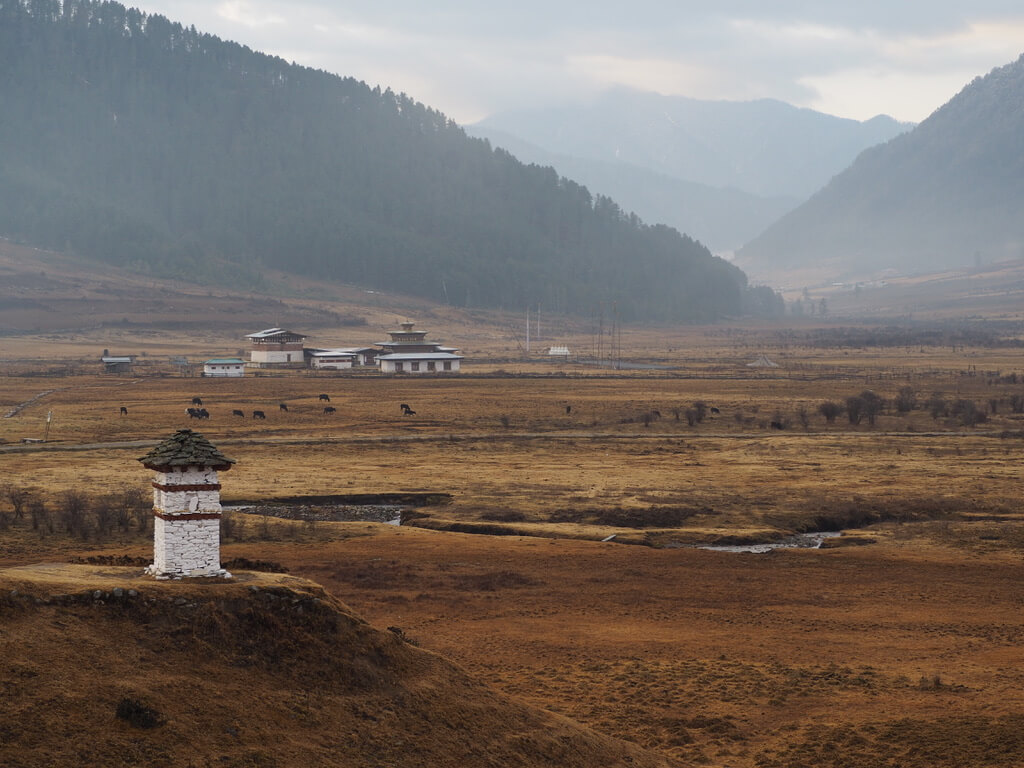 I rolled out of bed half-unconscious, threw on my layers, grabbed my bag and hopped on the bus as it coasted out of the parking lot. The sun hadn’t shown its presence yet so I drifted into complete unconsciousness on the short drive. We split up into three groups of eight and began the hike to the viewing hut that was perched on the hillside above the valley. 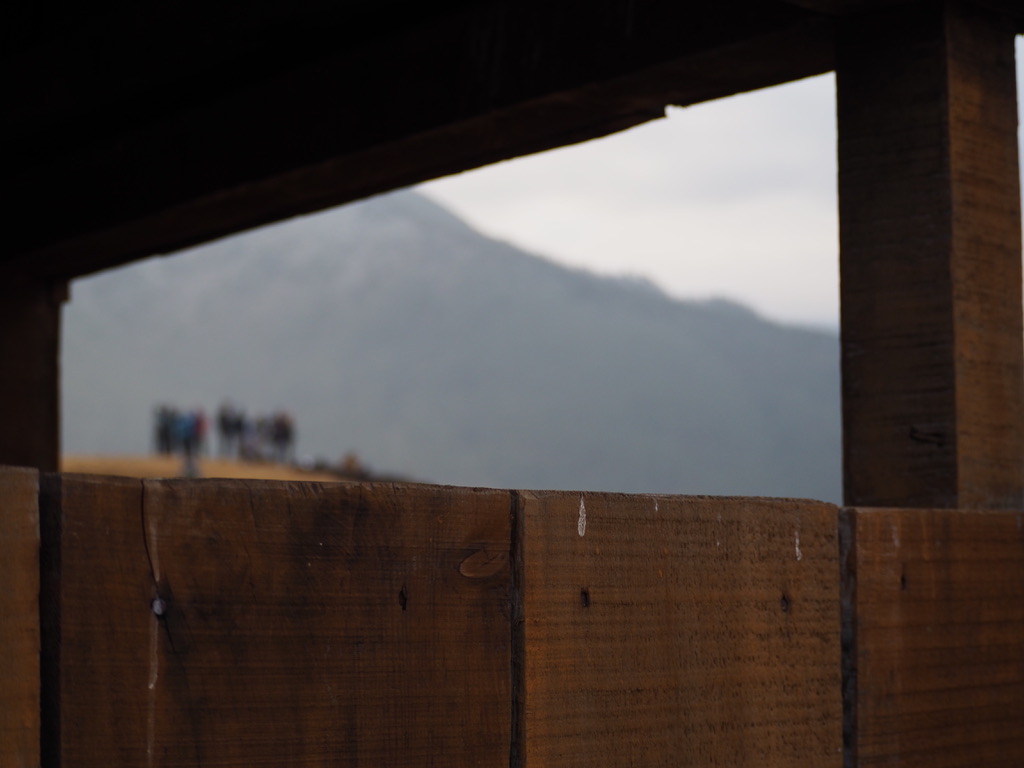 Viewing hut and a few students overlooking the valley

As we approached our destination, their presence was becoming clear, heard but not seen. We made it to the small viewing shack and I pulled out my binoculars and camera in anticipation of the sunrise. As the light began to creep its way over the ridge line, we could finally see the astounding event: hundreds of black-necked cranes roosting in the valley bottom.

They are a beautiful and vibrant white with thick black feathered tails and, as their name suggests, they have long black necks with a small patch of red on the tops of their heads. As there are an abundance of predators in this area including leopards and foxes, the cranes roost in the many shallow bodies of water until sunrise where they then begin the search for food. As the morning went on, our professor, Dr. Purna Chhetri (PBC), consistently apologized for forcing all of us to get up so early but each time he tried, we all shushed him and expressed our extreme gratitude for sharing this experience with us. 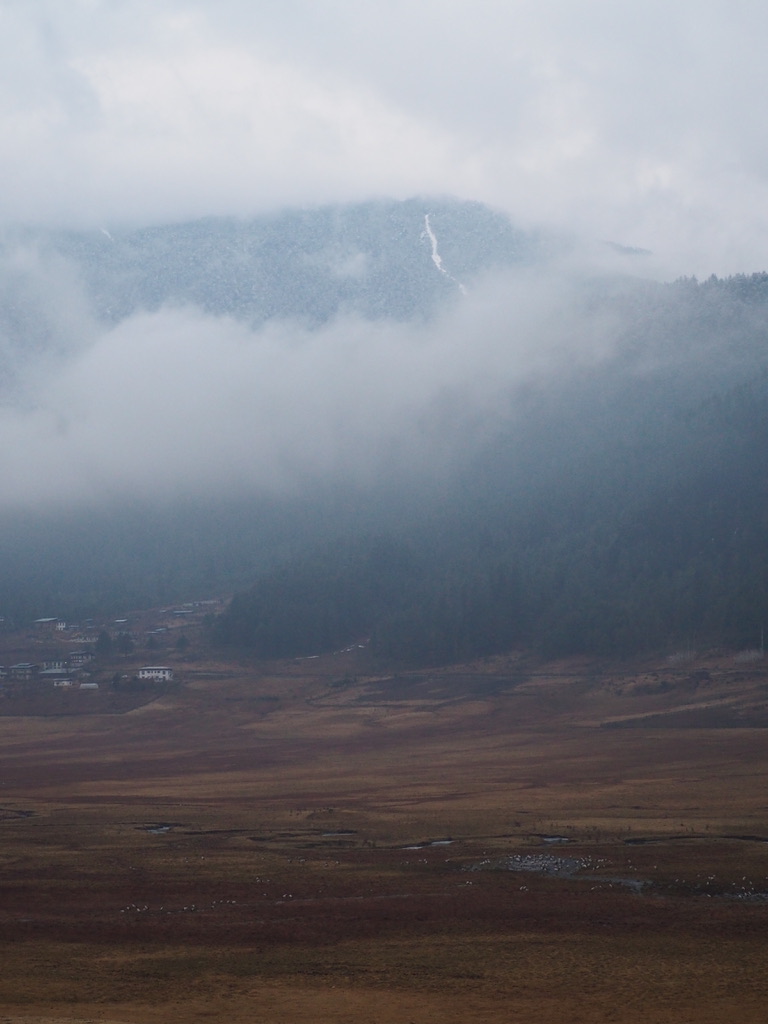 Bhutan is unique in a multitude of aspects including culture, governmental policy, and environmental protection mandates. Although most don’t know of the small kingdom, those who do have likely heard of Bhutan due to Gross National Happiness (GNH), Bhutan’s governmental philosophy. While many interpret this as Bhutan being the happiest country in the world, it is actually a development strategy similar to Gross Domestic Product (GDP) yet based on the Buddhist (Bhutan’s major religion) theory, The Middle Path. This simply suggests that development shouldn’t be solely based on economics, it should sit on a fine line, the Middle Path, between material development and cultural, spiritual, and environmental enrichment. 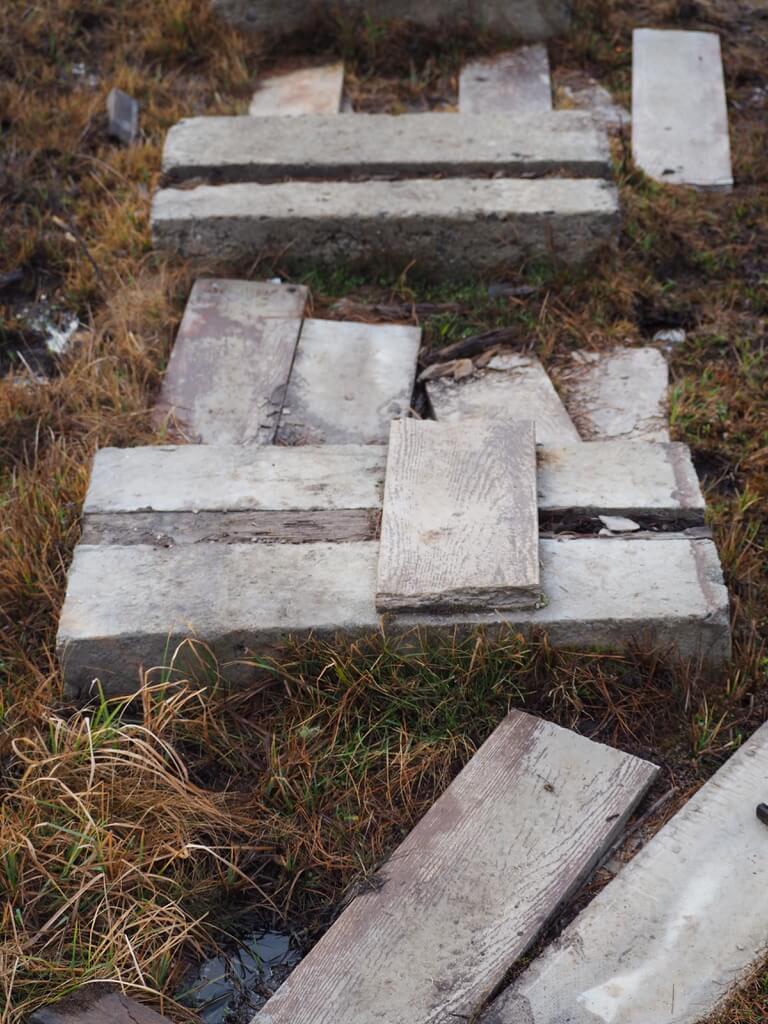 The path that led to the viewing site

Because of this distinctive management strategy, Bhutan has been able to create an incredible habitat for a wide variety of species, which is extremely important because of where the Land of the Thunder Dragon is located.

Nestled in between India and Tibet, Bhutan has one of the world’s most intense altitudinal gradient differentials. 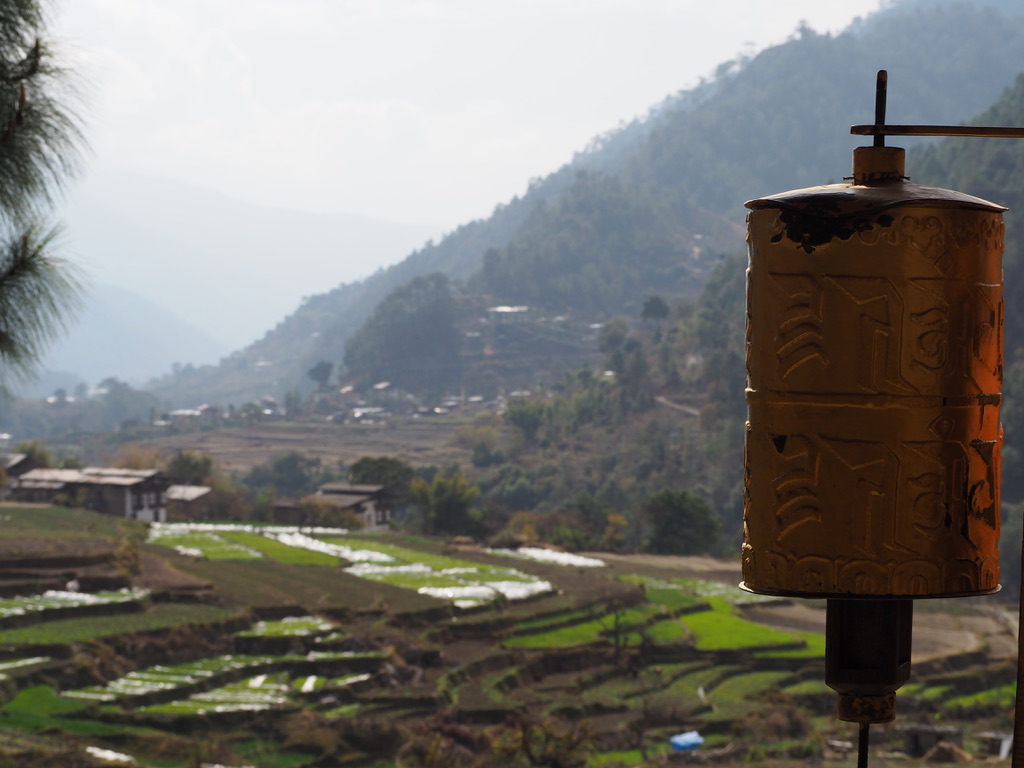 Punakha Valley and a prayer wheel

From the border with India, sitting at roughly 350 feet, to the tallest peaks in Bhutan, sitting close to 25,000 feet, Bhutan hosts many different species such as tropical fruits like Mangoes (a nickname I have in fact been given by my fellow SFS classmates), Red Pandas, Golden Langurs, wild yaks, and even the mysterious snow leopard. 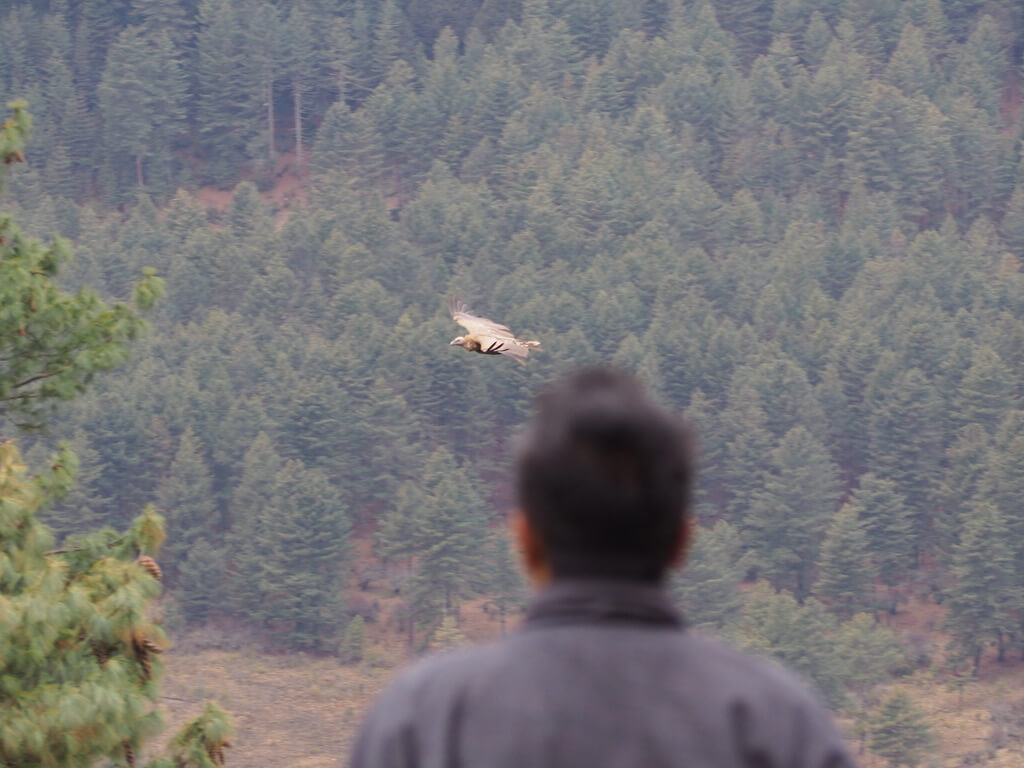 A Himalayan Griffon and Namgyel, our language and culture instructor

Fortunately, the government of Bhutan has realized the importance of this landscape and has protected over half of its total land area. This protection is in the form of National Parks, Wildlife Sanctuaries, and, possibly the most important, biological corridors. These corridors allow animals to migrate throughout the country and are a reason that scientists were able to discover the wild altitude gradients that tigers migrate through in this region. Along with biological corridors, camera trapping allowed scientists to capture images of a tiger at an altitude of over 11,000 feet, which was tracked from the Royal Manas National Park in southern Bhutan. Also, Bhutan is known as the only place in the world where tigers and snow leopards are known to coexist. Because of Bhutan’s commitment to environmental protection stemming from Buddhist beliefs and traditions, many species have begun to rely on this land and its resources including the tiger, which has recently had a surge in population, and the black-necked crane, which annually roosts in the protected wetland area of Phobjikha valley.

I hope that Bhutan’s environmental persistence and success will inspire other countries to become more environmentally aware. 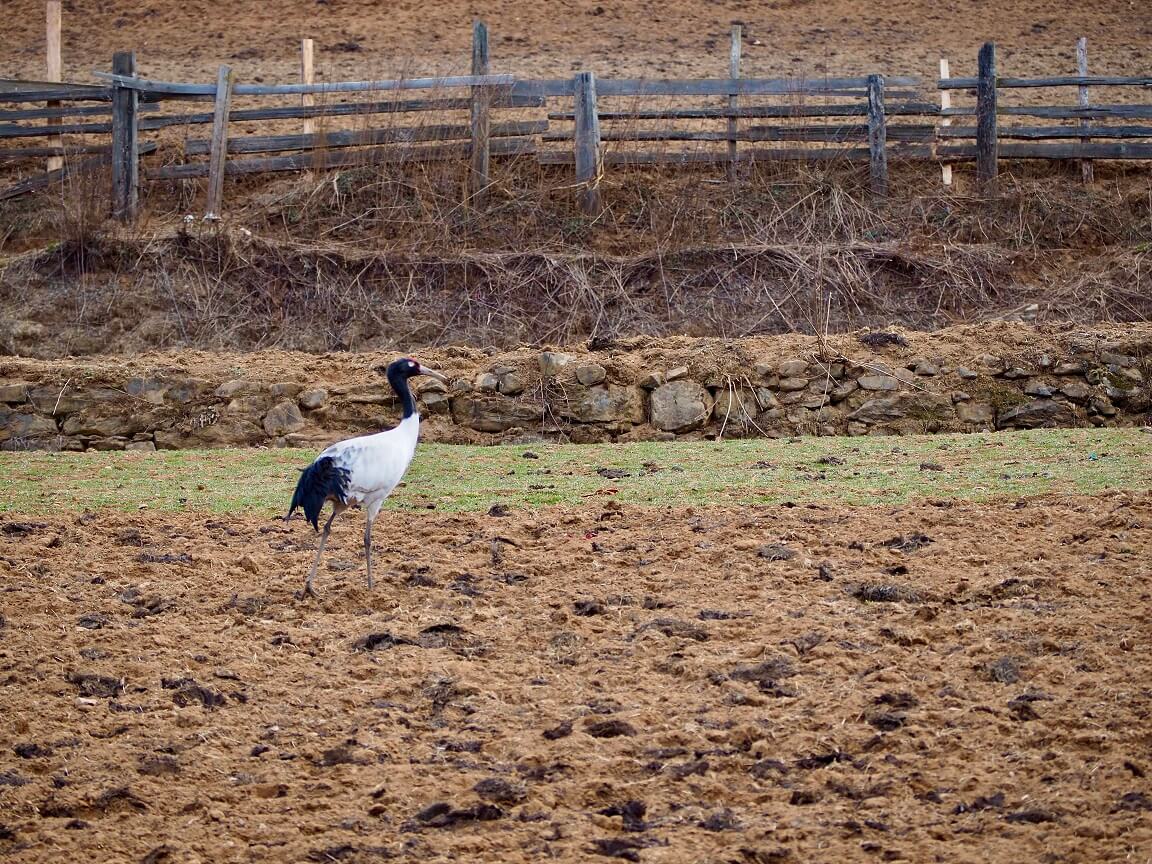 Although I’ve only resided in Bhutan for just over a month now, Drukyul has already left its impact in my life. The delicious food like Ema Datshi, the numerous picturesque views, the intricate architecture, the tremendously kind locals, and even the national dress, the gho (for males), Bhutan has left me full of emotion at every mountain pass. 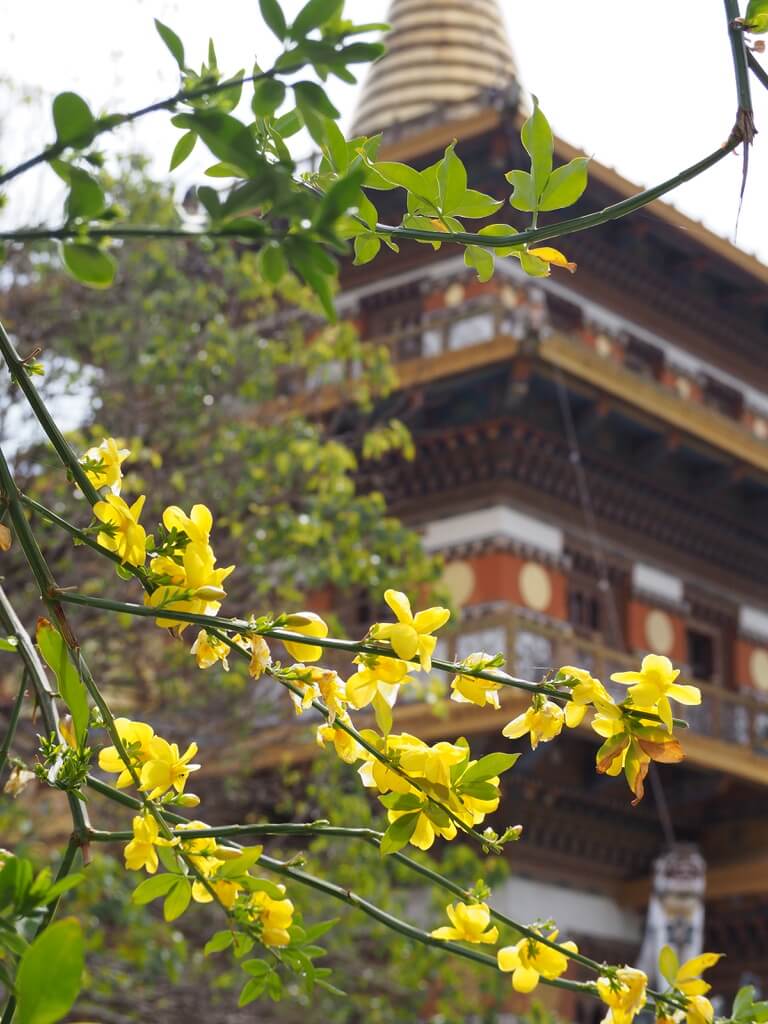 My main academic focus is astrophysics so making the decision to spend a semester doing environmental studies was difficult but I can say without a doubt, it has been one of the greatest decisions of my life and I have SFS to thank for that. Similar to its ability to protect the environment and wildlife, Bhutan has conserved my passion and curiosity for the natural world and the mysteries that it holds. 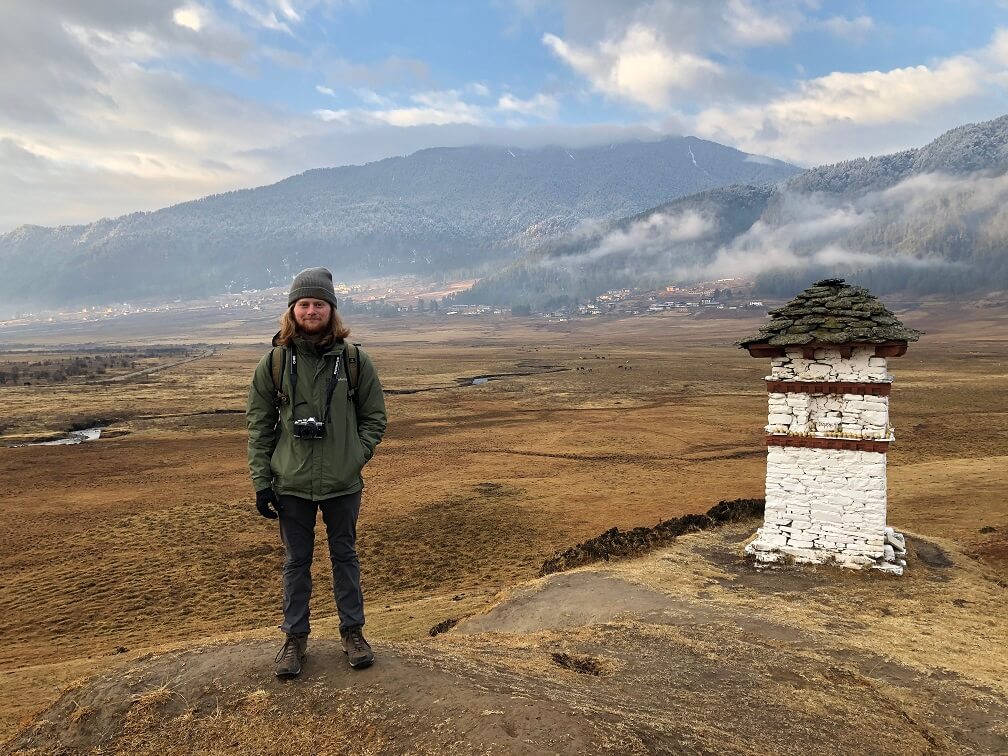 A photo of a wild mango and the Phobjikha Valley. Photo courtesy of Annika Min