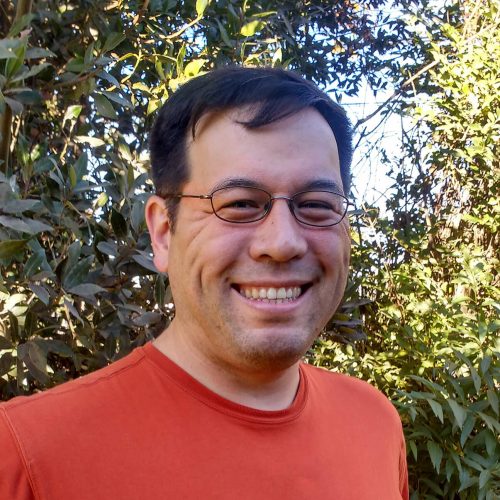 From Rainforest to Rain Shadow; from Mountain to Fjord

Getting off the bus in Parque Nacional Pali Aike (-52.100, -69.733), the Pampas seems to stretch out forever, intercepting clouds and blue sky at a distant horizon. This is the only place in Chile that arguably could be referred to as “big sky country.” And it looks a lot like the wide-open plains of Montana, mainly because it shares a cold semi-arid climate, which supports an analogous (although evolutionarily distinct) plant ecology. Here, though, guanacos (Lama guanacoe) and ñandús (Rhea pennata) roam, grazing on and rooting through the coirón (Festuca gracillima).

They look up as the students start to gather for a hike across the scoria fields that mark an old lava flow, with our eventual arrival at the Cráter Morada del Diablo. Although the lava last flowed here several thousand years ago, the processes of primary succession have yet to cover over these basalts with much more than a rime of lichens in most places. Here and there, we see the effects of microclimate that allows barba de viejo (Usnea spp.) to grow in patchily. After we pass over crevasses and through old lava tubes, we reach the entry to the crater, in which we can see the greatest effect of microclimate: a wall covered with lichens and mosses out here in the far western end of the Patagonian steppe. This opens up to the broad Cráter Morada del Diablo itself, which receives many exclamations from the students. Here, where magma once spurted to the surface, students learned about vulcanism before walking back across the scoria, but with new eyes to the surrounding geology. 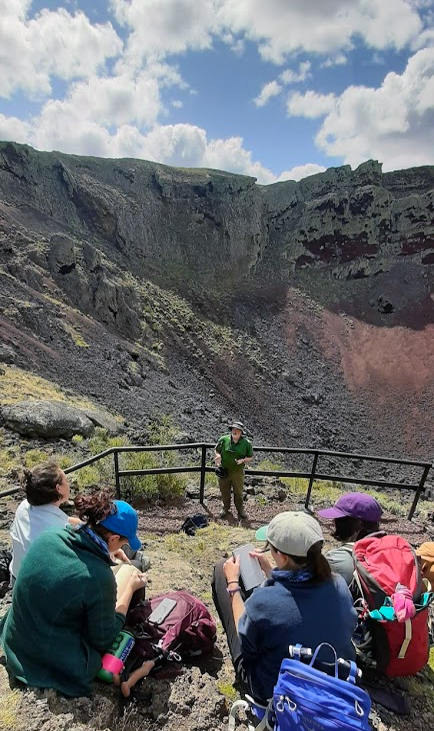 Eight kilometers away from the Cráter, the students overlook the maar lake that is Laguna Ana and the guanaco herds that are grazing uphill from there. There, in the outdoor classroom, they sit a field quiz on the larger ecosystem processes that they witnessed on the trip from the fjord of Puerto Natales to the steppe surrounding them. After a half hour, they then walk down to Laguna Ana to discuss the topic of borders and frontiers at the boundary of Argentina and Chile, which happens to cut directly through the water, and is only marked by a low fence that is also the boundary of the national park. 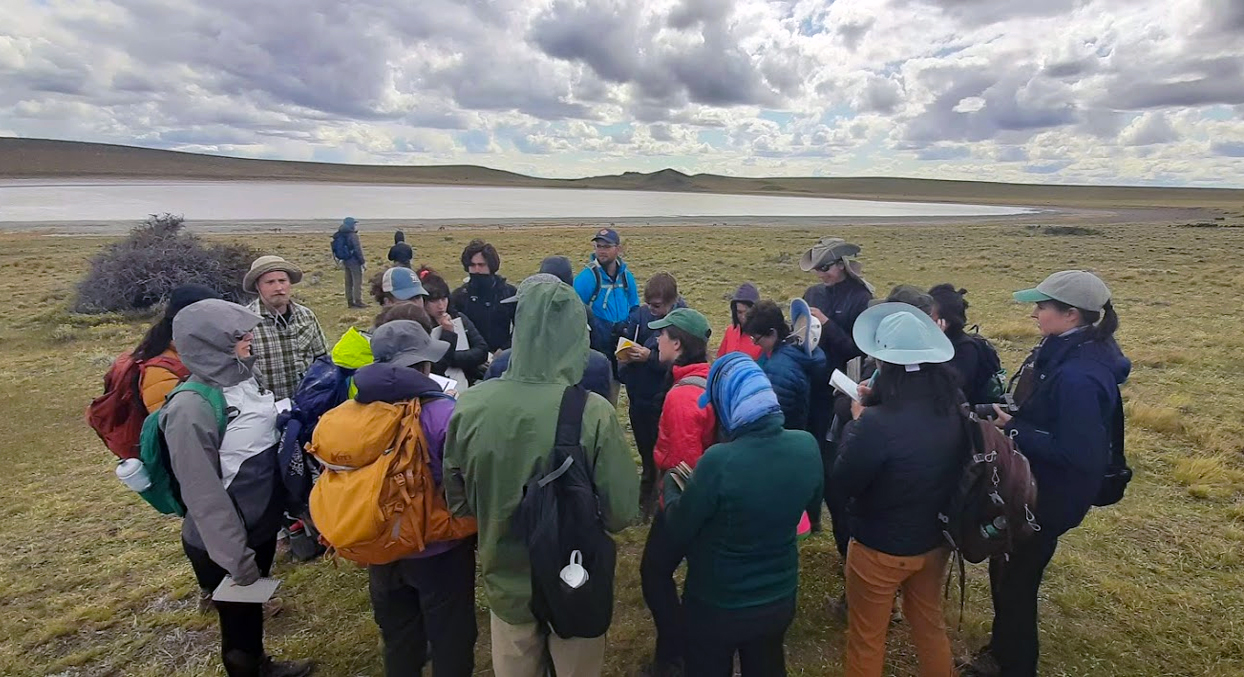 But Patagonian ecosystems contain more than the arid, seemingly eternal Pampas situated East, out beyond the Cordillera de los Andes; their western slopes contain some of the wetter places on the continent.

Stepping from the ferry and onto the Gran Isla de Chiloé (-41.831, -73.512), we see rolling hills that speak of a landscape carved by glaciers and a lushness of grass and trees that speaks to the area witnessing more days of rain than days of sun. In this sense, the green island of Chiloé shares a climate and geomorphic history and current climate with the Emerald Isle. Indeed, it is this commonness that allowed the potato – which evolved in Chiloé – to take so readily to the conditions it found in Ireland.

Prior to embarking from the mainland, we have already passed through the temperate rainforests of Parque Katalapi, where we saw arrayán (Luma apiculata) trees covered with myriad epiphyte communities as well as the katalapi (Blechnum magallanicum) and costilla de vaca (Blechnum cordatum) tree ferns and measured leaf dimensions of 1800 notro (Embothrium coccineum) leaves as part of a comparative phenology field exercise. (This last exercise will be repeated on our trip to Parque Nacional Torres del Paine to examine the effect of latitudinal gradients on tree growth as well as providing the Corporación Nacional Forestal with information about the regrowth of notro in burned areas within the park.) 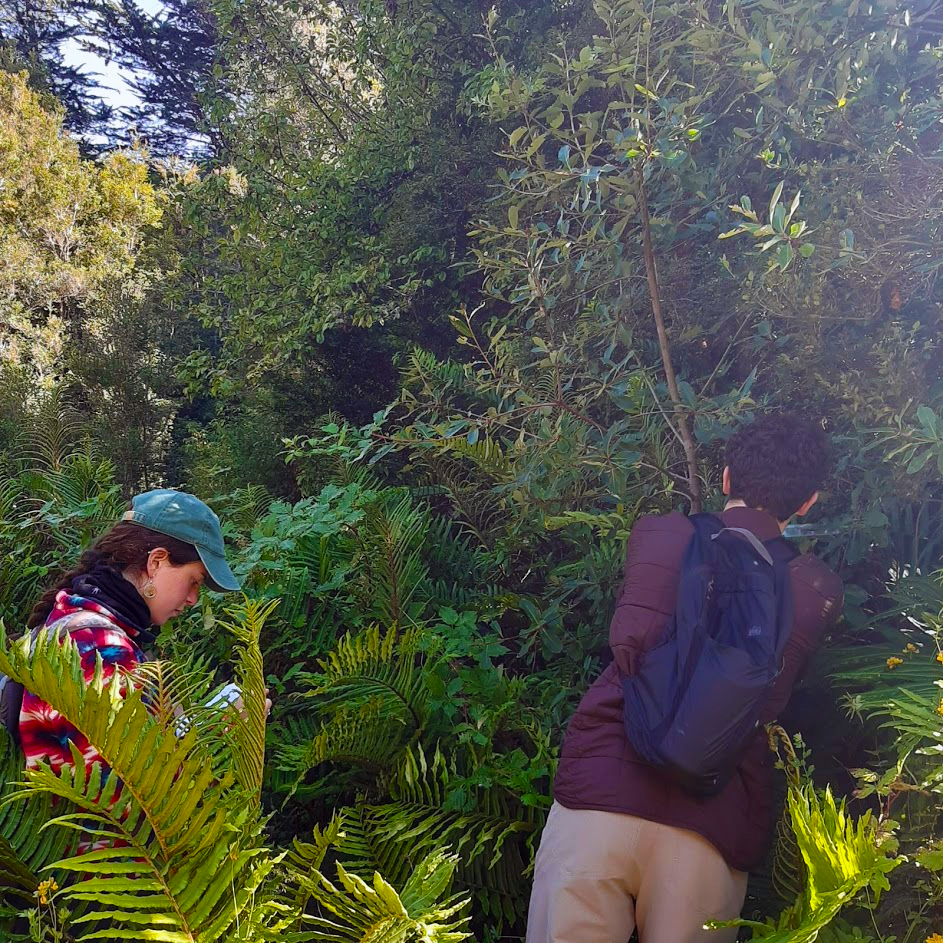 In the following days, we went to Parque Valle los Ulmos, where we learned about volcano ecology and saw tons of the massive-leafed nalca (Gunnera tinctoria) that play a critical role as nitrogen fixers to assist with primary succession. 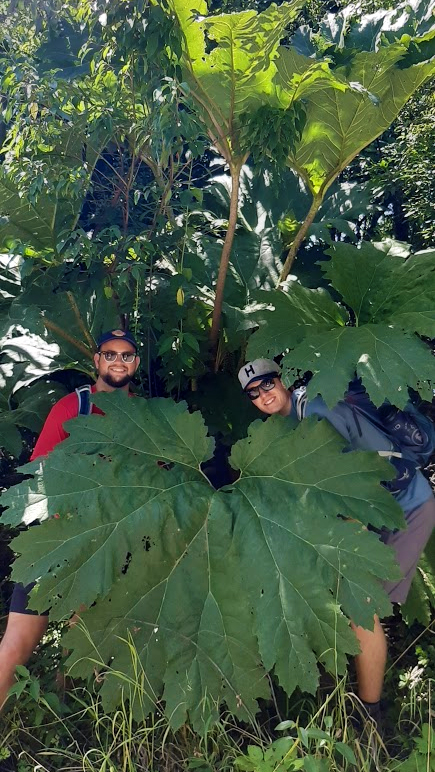 We also spent a time on the sides of the Osorno and Calbuco volcanos, examining the geological and ecological effects of vulcanism on the tephra fields there, witnessing the various means by which elevational gradients affect ecology. 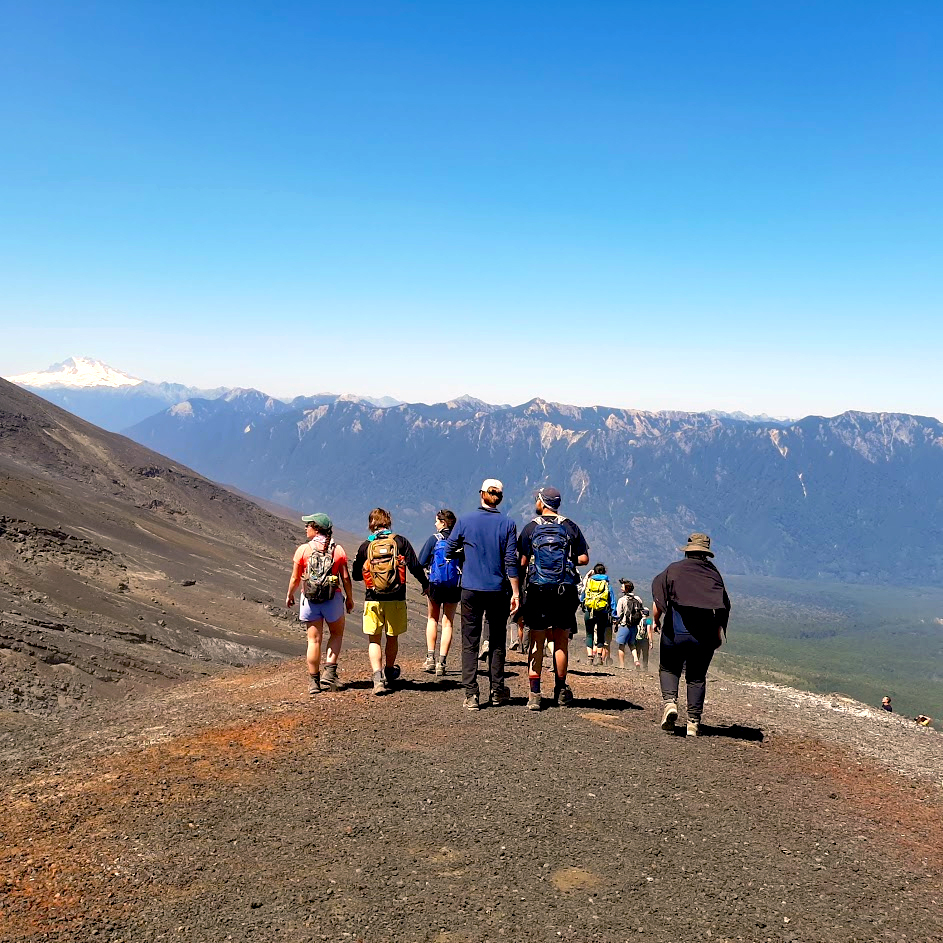 But now we stand on the shores of Chiloé, with a drive to see the shorebirds of the area, which include Humboldt and Magellanic penguins. Indeed, among the Islotes de Puñihuil, we see several populations of these birds, along with cormorants, kelp geese, basking sea lions, and even a sea otter. Dolphins keep pace with our boat, too. 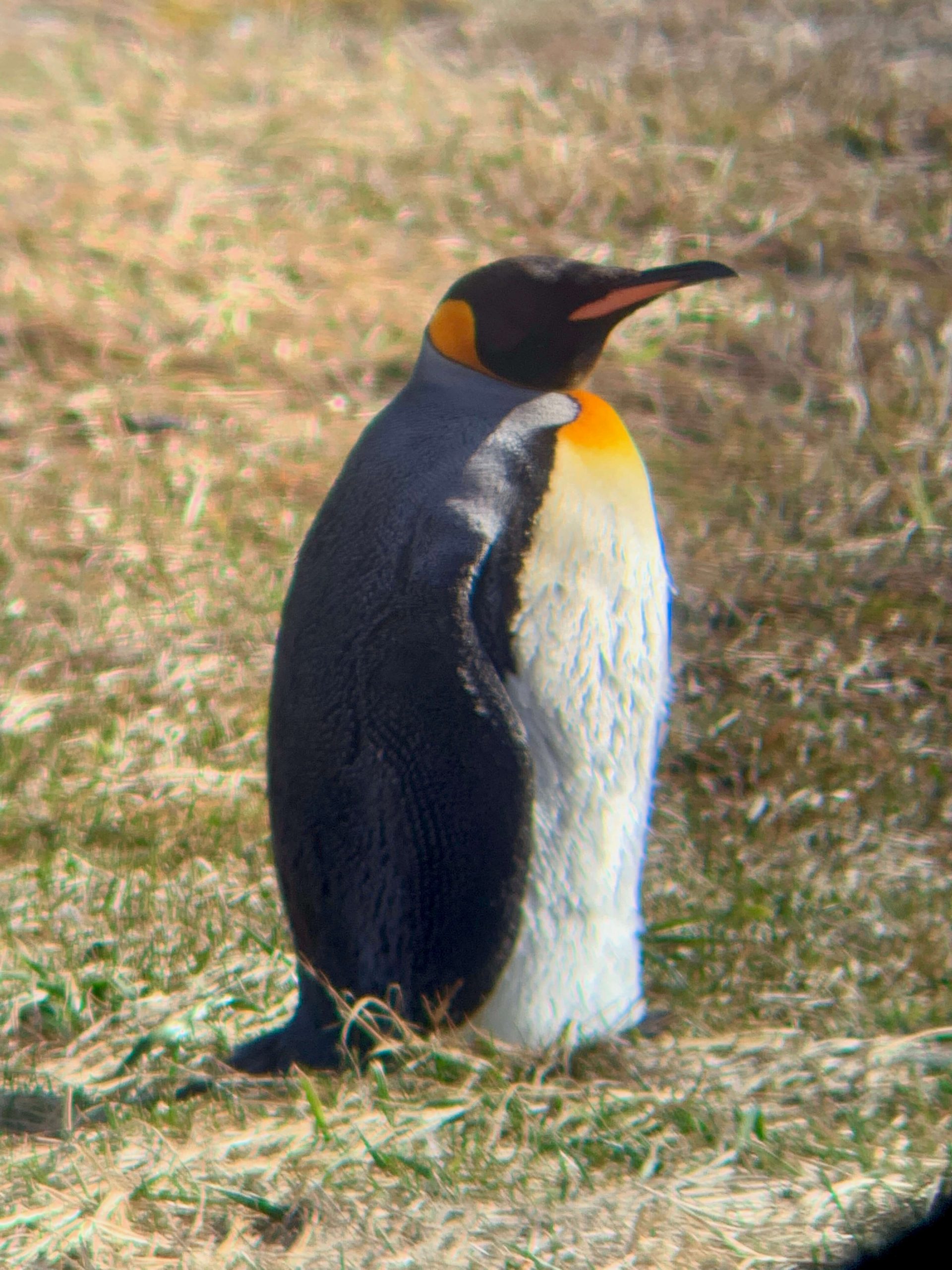 In the next days, the students will learn first-hand about the Chilote custom of curanto and experience the connection it has with natural resources found in the immediate surroundings. 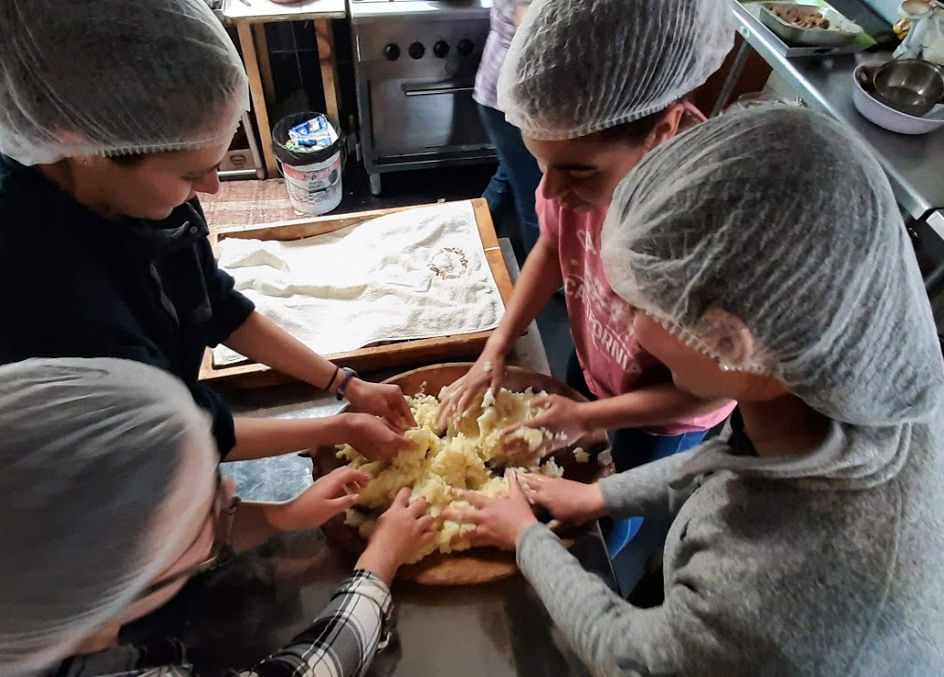 They will also see some of the unique cultural contexts that mark the island of Chiloé before they return to the stiffer breezes of Southern Patagonia. There, the second largest icefields in the world create a unique ecosystem where the Andes meet the Pampas.

As we eat our lunch under towering, centuries-old lengas (Nothofagus pumilio) in Parque Nacional Los Glaciares (-50.450, -72.776), austral parakeets squawk in the canopy and restlessly fly in emerald-feathered squadrons between trees until – for a brief moment at least – they all settle restlessly in one tree. The leaves of individual trees are starting to turn yellow and orange; some trees bear only one branch filled with small, crimson leaves, while others hold vast curtains of yellow and green. Occasionally the wind rises above a soft-rustling breeze, creating whorls and cascades of gold, scarlet, and brown that catch the early afternoon sun. 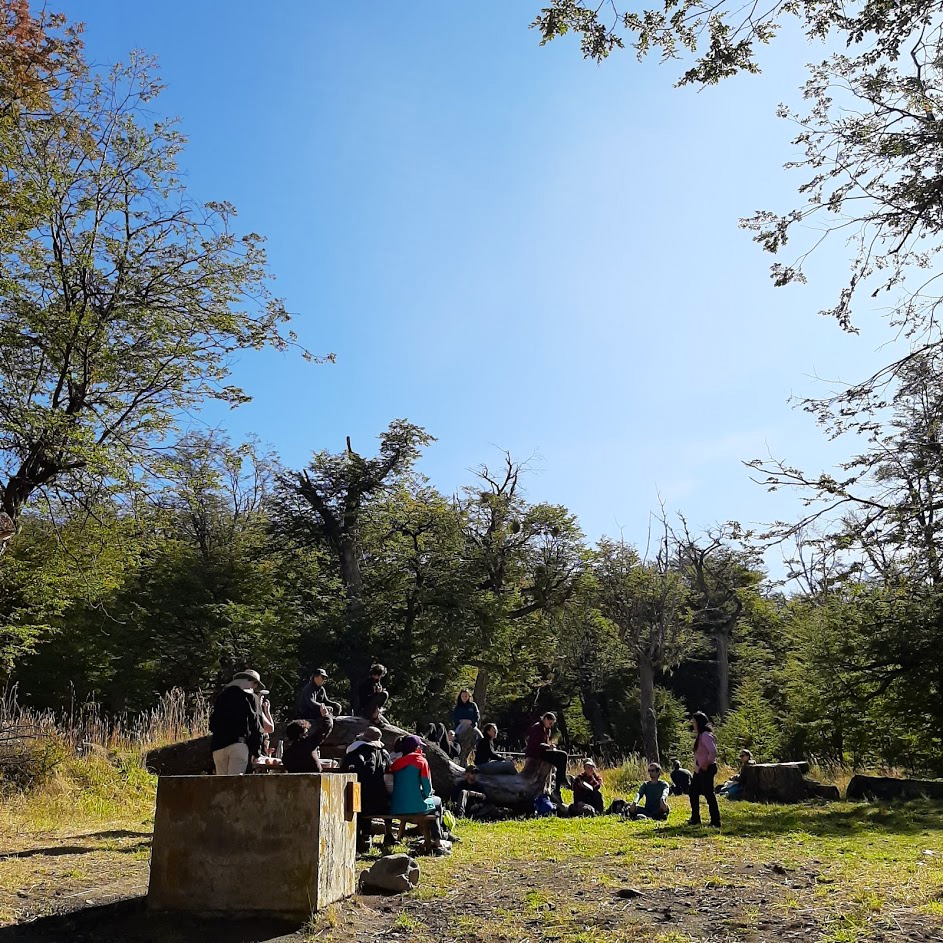 It’s been a cooler year than normal; this transition is roughly a month earlier than typical. Here and there, we see evergreen coigüe (Nothofagus betuloides) and the twisted branches of ñirre (Nothofagus antarctica). In a few months, the partitioning of this forest will become apparent, with ñirre found more often in the water-heavy soils near Lago Argentino, and bands of coigüe and lenga working along and up the sides of the mountains. Further along the day, we will arrive at the breathtaking Glaciar Perito Moreno.

Compared to when we last saw it in October, the waters of the Brazo Rico have now pushed open the contact the glacier made with our shore, and these two arms of the lake are briefly connected. The students will walk across the walkways that provide access to viewing platforms, watching for calvings (there will be several small ice-falls), all the while observing the behaviors of tourists. I idly wonder how these tourist observations for their PDSC course will compare with the observations they made of guanacos for my Patagonian Ecology course at the start of the semester. All around us here, though, is a mature forest made of only a handful of species: the result of climate, isolation, and multiple rounds of glaciation. 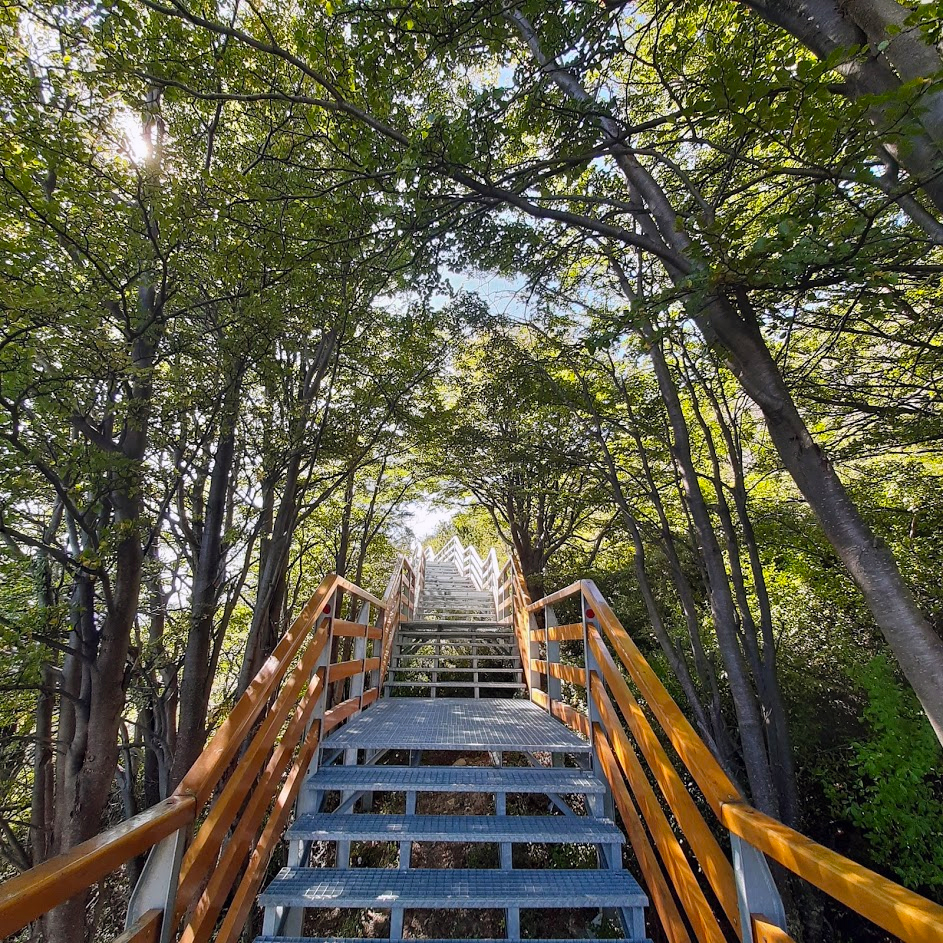 Just to the east of here, the transition from lusciously green Nothofagus-dominated forest to golden yellow coirón-dominated steppe occurs in less distance than a football pitch, as the humid air around the glacier cross over the low mountains, losing moisture, to pass along the great wide open Pampas as a dry mass. The students have just taken a field quiz along Ruta 11, where they saw this rapid transition lay across their path. 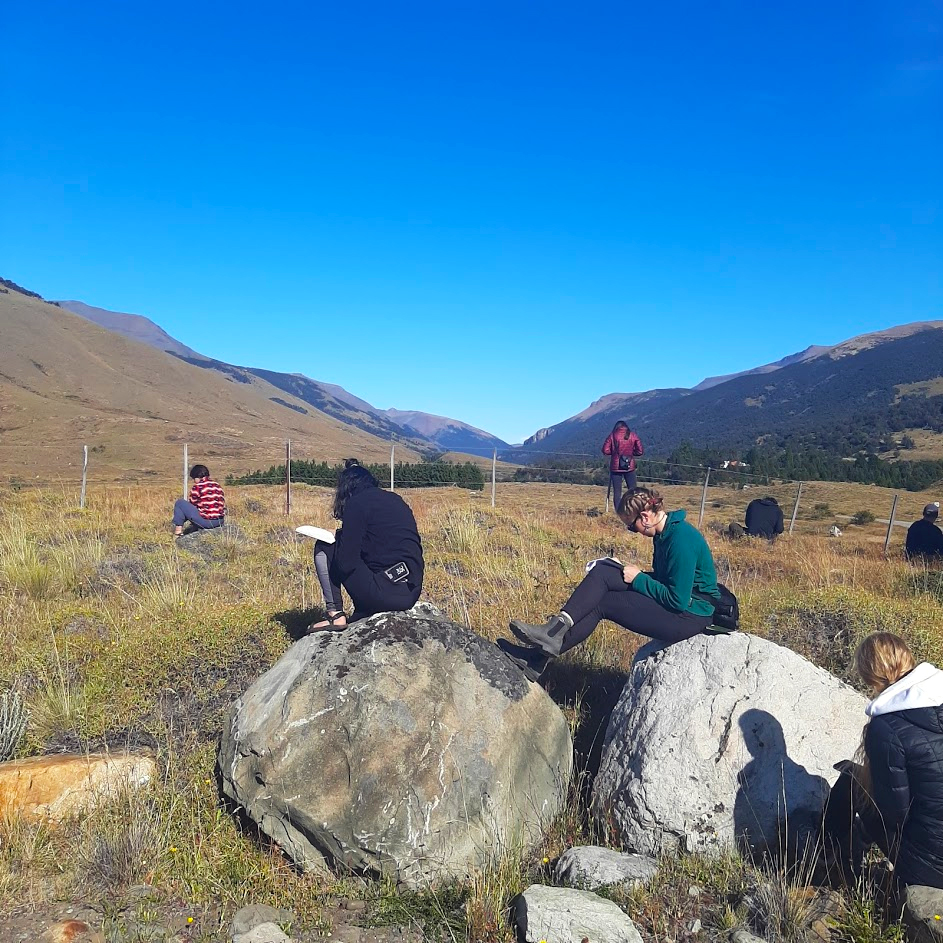 These are just a few of the climate and ecological contexts of Patagonia. The rest of the teaching semester promises more diversity, where we can pass through the wet, windward slopes surrounding the Cueva de Milodón to the dry, leeward slopes on the other side. We will pass along the valley of Glaciar Grey, with katabatic winds pushing us toward Paine Grande, along the path of the 2015 wildfires. Finally, we will pass through sub-polar rainforests, the moorlands atop the rocky promontory of Cape Horn, and the Nothofagus forests of Ushuaia, after passing through Glacier Valley to end our teaching tour of Patagonia and its varied ecosystems. From Pacific coast rainforests to the rain shadows that fall on Atlantic drainages, Patagonia piques our interests with its unique landscapes that hint at analogues from other places, but whose distinct evolutionary lineages and cultural contexts constantly test the lenses through which we see it.